Herein, we report a 35-year-old female case who was admitted to our emergency department with chest pain along with a past history of asthma and pleural effusion. Her laboratory findings revealed high levels of cardiac biomarkers [troponin I (TnI) and creatine kinase-MB isoenzyme (CK-MB)] without significant ST segment and T wave (ST-T) changes in the electrocardiogram. Transthoracic echocardiography showed hypokinesis of the anterior wall with an ejection fraction of 48% and minimal pericardial effusion. Coronary arteriography revealed a distally occluded left anterior descending coronary artery. Churg-Strauss syndrome with acute coronary syndrome was diagnosed. The patient was administered systemic corticosteroid therapy. Our patient subsequently made an uneventful recovery.

Churg-Strauss syndrome (CSS) is defined by the American College of Rheumatology (ACR) as eosinophilic vasculitis in addition to one or more of the following: asthmatic airway obstruction, a differential leukocyte count with more than 10% eosinophils, migratory or transient pulmonary infiltrates, sinusitis and mononeuropathy, or polyneuropathy.[1] Churg- Strauss syndrome can lead to cardiac involvement in up to 60% of patients, and this is a leading cause of mortality that accounts for approximately one-half of the deaths associated with CSS.[1,2] The cardiac problems associated with patients with CSS include a wide range of pathologies such as congestive heart failure, pericardial effusions, myocarditis, and intracardiac thrombosis. Myocardial infarction (MI) is also a rare clinical manifestation[3,4] and should be kept in mind as a differential diagnosis in CSS cases with an appropriate clinical picture. Herein, we present the case of a patient with CSS accompanied by pericarditis and acute coronary syndrome (ACS).

A 35-year-old woman presented to the emergency department with approximately a one-month history of chest pain and shortness of breath; however, the frequency of her symptoms had increased over the previous 10 days. In addition, her chest pain occurred both at rest and during exercise.

The patient's past medical history revealed asthma and recurrent pleural effusion of an unknown origin. After an initial assessment by the pulmonary medicine department to investigate the etiology of the pleural effusion, this fluid was analyzed for signs of tuberculosis (TB), even though the patient had no major risk factors that would have exposed her to this disease. The test results were negative.

The patient was admitted to the coronary care unit with a prediagnosis of myopericarditis. Although the disease presented with the clinical findings of ACS, it was not considered to be the primary diagnosis due to the patient's youth and absence of risk factors for atherosclerotic coronary disease. Myopericarditis was suspected because of the TnI elevation in the laboratory results, hypokinesis of the anterior wall, and minimal pericardial effusion identified via echocardiography. Subsequently, the patient was treatment with colchicine and high-dose aspirin.

During the clinical follow-up period, the patient's ECG showed dynamic anterior ST-T changes in the precordial derivations (Figure 1), and repeat measurements of these markers revealed a typical course of ACS that featured a relevant rise and fall in TnI. Therefore, the patient underwent coronary angiography which revealed a distally occluded left anterior descending coronary artery (Figure 2). Percutaneous transluminal coronary angioplasty was performed on the occluded site, and because of the thrombotic view of the lesion with a remnant of 30% stenosis accompanied by thrombolysis in myocardial infarction (TIMI) three flow, medical therapy with tirofiban infusion was prescribed for up to a period of 24 hours instead of stent implantation. 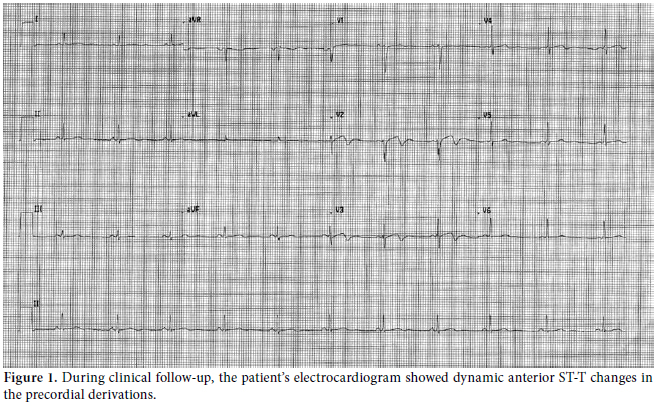 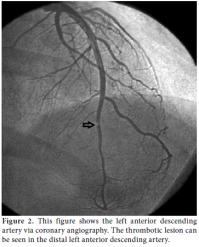 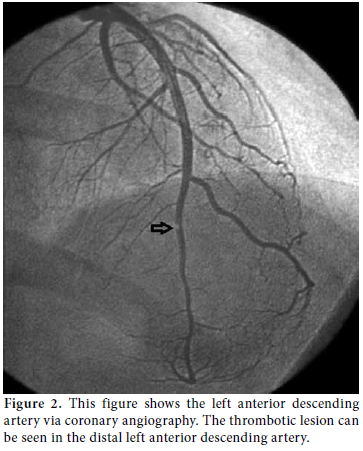 Consultations were then held with the pulmonary medicine and rheumatology departments regarding the eosinophilia identified in the CBC, pulmonary opacities revealed via chest X-ray, and the patient's past history of asthma (Figure 3). Furthermore, cranial computed tomography (CT) was performed on the day after the angiography which showed neurological involvement or paranasal sinus abnormality with a prediagnosis of CSS. The results of the cranial CT were also consistent with chronic sinusitis. The presence of asthma, hypereosinophilia of >10%, chronic sinusitis, and pulmonary opacities represent four of the six ACR criteria required for the diagnosis of CCS.[5] Our patient tested negative for anti-nuclear antibodies (ANAs), anti-double stranded DNA (antidsDNA), extractable nuclear antigens (ENAs) and anti-neutrophil cytoplasmic antibodies (ANCAs). The corticosteroid methylprednisolone at an initial dosage of 80 mg per day (1 mg/kg/d) was prescribed after the termination of the tirofiban infusion. Afterwards, the patient's eosinophil levels in the CBC decreased to normal ranges, and symptomatic relief was completely provided. Control coronary angiography was performed one week later, and the thrombotic lesions had disappeared (Figure 4). In addition, chest radiographs showed complete resolution of the opacities (Figure 5). After two more weeks, control echocardiography was performed revealing a normal morphology of the ventricles without any segmental wall motion abnormalities. Furthermore, the pericardial fluid had also disappeared. 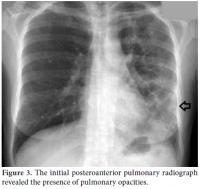 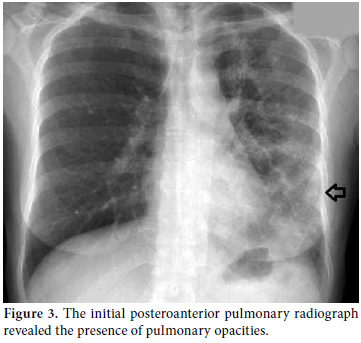 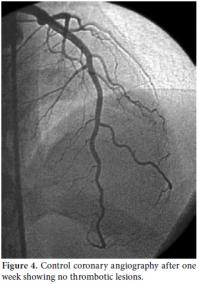 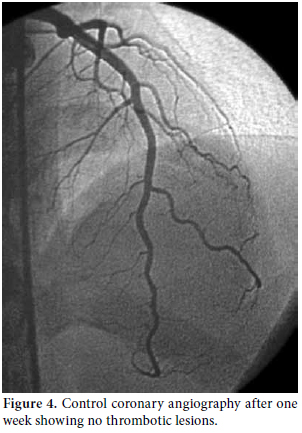 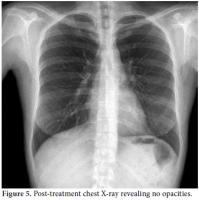 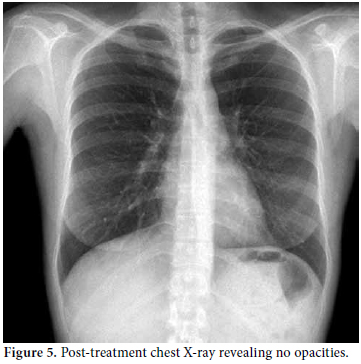 Churg-Strauss syndrome is a systemic, necrotizing vasculitis that affects small- to medium-sized vessels.[2,3] Cardiac involvement occurs frequently in CSS, resulting in significant morbidity and mortality.[2] Coronary arteritis is generally considered to be a part of systemic vasculitis, but on rare occasions, it can be an isolated manifestation of CSS that causes MI.[2] The overall prognosis for CSS is good; however, diffuse organ involvement, particularly in connection with the cardiovascular system, is associated with a poorer prognosis and increases mortality. In addition, central nervous system involvement may rarely occur with the same unfavorable outcomes.[3]

Although cardiac involvement was not mentioned in the 1990 ACR criteria for CSS, it is a common clinical manifestation that accounts for approximately one-half of all deaths attributable to this disorder.[1] Coronary artery vasospasm is another rare manifestation associated with CSS. However, in the literature, coronary vasculitis associated with CSS most often presents with vasospasm, whereas coronary thrombosis was observed in our case.[1,4]

Since systemic inflammation is believed to play a crucial role in endothelial damage, CSS is not the only disorder with “atypical” coronary pathology. Other rheumatic disorders can also present with coronary vasculitis, which can lead to coronary spasms and/or thrombosis.[6,7]

Immunosuppressive treatment with corticosteroids can result in the improvement of impaired cardiac contractility and resolution of pericardial effusions, and this is exactly what happened with our patient after the control echocardiography revealed normal morphology of the ventricles without segmental wall motion abnormality along with no pericardial effusion.

In addition, as with our case, patients with cardiac involvement are less likely to test positive for ANCA.[3]