Is There a Bridge Between Systemic Lupus Erythematosus and Thymomas?

In this report, we describe a 21-year-old male patient who developed a type C thymoma (undifferentiated carcinoma) after five years of stabilized systemic lupus erythematosus (SLE) activity. The patient remained stable even after chemoradiotherapy for the thymoma, and at the one-year follow-up, treatment had no effect on the progression of the SLE. Previous data regarding the coexistence of SLE and thymomas suggested that interaction occurs between these two diseases through some implicit mechanisms. However, we believe that no interaction takes place between two diseases, based on our experience and related literature data.

Systemic lupus erythematosus (SLE) is associated with several immune abnormalities involving both T and B lymphocytes.[1] A thymoma is the only tumor that has been proven to generate mature T cells from immature precursors.[2] Many people have suspected that the association between thymomas and SLE is not incidental[3-7] due to the primary immunological role of the thymus and the purported abnormal functioning of the T lymphocytes in SLE. However, in our patient, the thymoma developed after five years of stabilized SLE activity, and the treatment for the thymoma did not change the state of the SLE. Therefore, in spite of what has been presupposed, we hypothesize that there is no interaction between these two diseases.

For the past five years, a 21-year-old male patient with a past history of SLE had been receiving treatment with prednisone and hydroxychloroquine (200 mg bid) therapy at the rheumatology department of West China Hospital. The first onset of symptoms included oral ulcers, multiple serositis, multiple inflammatory synovitis, urine protein levels of 1.1 g/24 hours, positive anti-nuclear antibodies (ANA: 1:3200; speckled), and anti-double stranded DNA (anti-dsDNA) above the laboratory reference range (1:320), all of which fulfilled the criteria for SLE.

The patient was admitted to the rheumatology department at our West China Hospital in June of 2012 due to a two-month history of left chest pain accompanied by fatigue, accidental palpitation, and dyspnea. His lupus status was inactive at that time with a Systemic Lupus Erythematosus Disease Activity Index 2000 (SLEDAI-2K) score of 4 due to pleurisy and pericarditis. After thoracic computed tomography (CT), the existence of a tumor measuring 7.5x11.5 cm was confirmed in the anterior mediastinum (Figure 1). A percutaneous biopsy also suggested a type C thymoma (undifferentiated carcinoma) (Figure 2).[8] As a preoperative therapy, the patient had undergone four rounds of chemotherapy and 11 rounds of radiotherapy. At the one-year followup, his SLE was stable with a SLEDAI-2K score of 0. 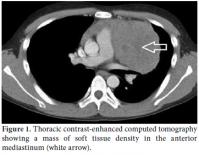 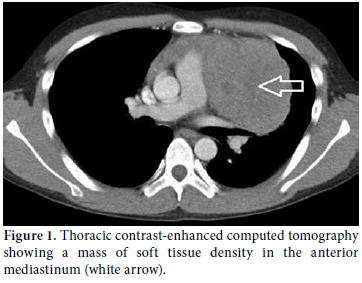 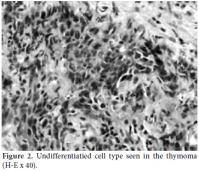 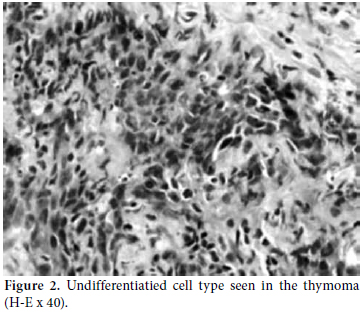 In the past, some in vitro and in vivo experiments suggested that thymic abnormalities could play in role in the appearance of autoimmune diseases.[6,7] In addition, some research declared that intratumor thymopoiesis could generate impaired T cells or alter the T cell repertoire and create a greater potential for the onset of autoimmune diseases such as SLE.[2,3] In fact, it has been accepted as truth that thymomas can affect autoimmune diseases like SLE through some unknown mechanisms.[3-7] If we follow this path of thought, it is also easy to deduce that for patients with both autoimmune diseases and thymomas, the treatment given for thymomas, (i.e., a thymectomy) would improve the clinical outcomes of autoimmune diseases since there is a relationship between the two. Furthermore if there are some immunoregulations associated with both SLE and thymomas, then these two diseases are most likely to occur or, if already present, accelerate under dramatic changes such as when a thymectomy is performed or when the SLE is in the active stage. However, none of these hypothetical manifestations were observed in our patient. Meanwhile, a recent meta-analysis of thymomaassociated SLE suggested that variable outcomes are seen with this disease after thyroidectomies rather that the previously assumed improvement.[9] Hence, we began to doubt the accepted assumptions regarding the connection between immunoregulations and thymomas and SLE.[3-7]

Additionally, we reviewed 24 cases in the literature published in English along with our own case, all of which had relatively detailed information about the patients' clinical features (Table 1),[4,5,10-24] and discovered that most of the patients underwent surgery as the primary treatment for the thymoma, with some combining the surgery with radiotherapy and/or chemotherapy. The outcome of SLE varied after the treatment with remission in five of the 24 patients, exacerbation in seven others, no reported changes in five more, and SLE occurrence in the other six. We also noticed that there were no specific features in these patients with the different outcomes.

Table 1. Characteristics of the 24 patients with both a thymoma and systemic lupus erythematosus
× 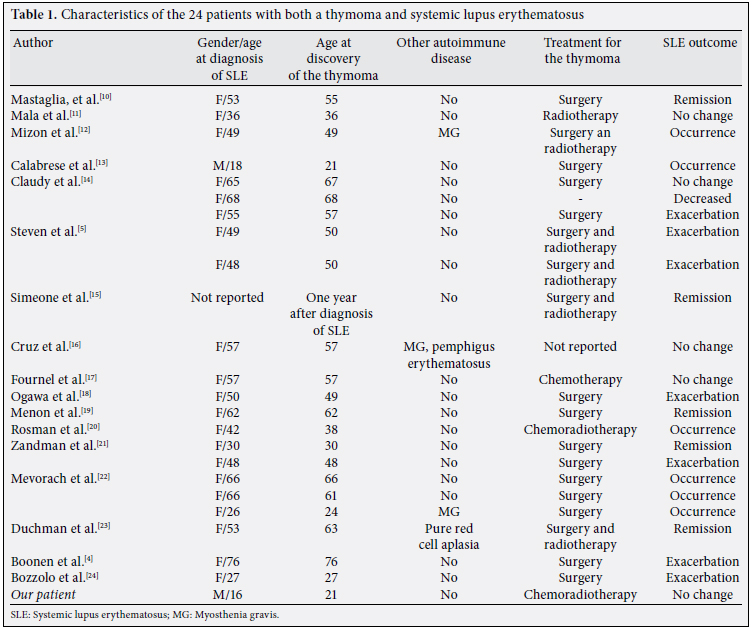 Therefore, we argue that the so-called interaction between thymomas and SLE does not exist. If this was the case, then the SLE would have accelerated after the onset of the thymoma or been alleviated after treatment for this tumor. At the very least, the outcome of SLE after a thymectomy ought to be unanimous, but none of these scenarios occurred in our patient or in the cases that we reviewed in the literature.

Finally, though we doubt that the relationship between SLE and thymomas is as close as was previously presumed, further studies with more evidence are needed to prove our hypothesis. However, our findings indicate that clinicians should not overlook the variable prognosis of SLE after treatment for thymomas.

Funding
This work was supported by the National Natural Science Foundation of China (No.81172869 and No.30901339, to Qibing Xie) which did not influence the authors' judgement.