Behçet’s disease (BD) is a rare autoimmune and chronic inflammatory vasculitis, characterized by relapsing episodes of oral aphthous and genital ulcers, skin lesions, ocular lesions and vascular involvement. Pulmonary artery involvement is rare in BD but it carries a high mortality risk. In this article, we report a 15-year-old male patient presented with a two-month history of hemoptysis, cough, fewer and weight loss. On physical examination, auscultation revealed decreased breath sounds at left lung base. Bronchoscopy showed narrowed left lower lobe bronchus due to the external compression. Computed tomography angiography revealed multiple bilateral pulmonary artery aneurysms. Pathergy test was positive and he was diagnosed with BD. BD should be considered in the differential diagnosis of childhood hemoptysis.

Behçet’s disease (BD) is a rare disease, characterized by chronic perivascular inflammation, recurrent oral and genital ulcers, ocular inflammation and multisystemic involvement due to vasculitis. It is more common in countries along the old Silk Road such as Turkey, Greece, and Israel. The etiology is unknown, while epidemiologic data point to the role of both genetic and environmental factors.[1,2] BD usually presents at third to fourth decades and is rare in children. Vasculitis in BD can affect both arteries and veins; however, venous involvement is more common. Although the most common arterial involvement is pulmonary artery aneurysm (PAA), it occurs very rarely in BD. In a retrospective analysis, the prevalence of pulmonary artery involvement including PAA and pulmonary artery thrombosis was found to be 2%.[3] To our knowledge, there is no data about the prevalence of PAA in children with BD. Patients with PAA usually present with hemoptysis and carry a high risk of mortality.[4] It should be kept in mind that some life-threatening features in the pediatric population may occur earlier than mucocutaneous findings.

In this article, we report an adolescent diagnosed with BD to emphasize the importance of vascular etiologies such as BD in the differential diagnosis of hemoptysis even in the pediatric age group.

A 15-year-old male patient presented with productive cough, hemoptysis, fever, and weight loss. His symptoms had started two months before. Hemoptysis resolved after a course of co-amoxiclav with the diagnosis of pneumonia, but intermittent productive cough and fever persisted over the two months, while he lost 4 kg within this period. On past medical history, he had recurrent oral and genital ulcers over the last year. Family and natal history was not remarkable. A written informed consent was obtained from the legal guardians of the patient.

On physical examination; his general condition was fair, he had fever (axillary: 38.5°C) and seemed fatigued. His height and weight were within the normal range. He had decreased breath sounds at the left lung base. Oxygen saturation was 98% on room air. He had digital clubbing, and other system examinations were normal. 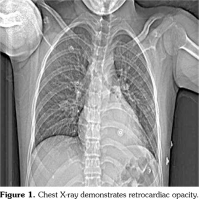 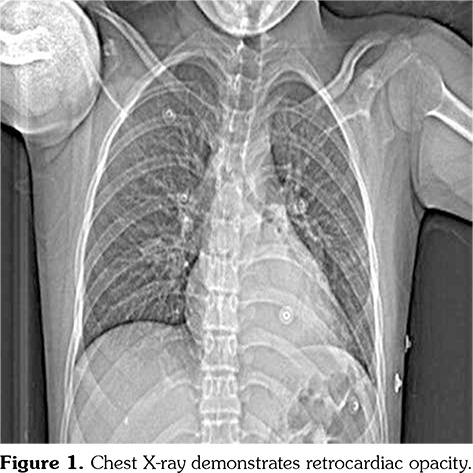 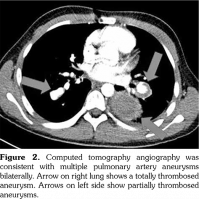 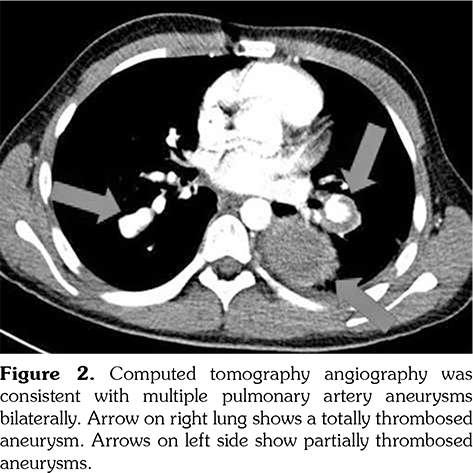 Pathergy test was performed due to the presence of recurrent oral and genital ulcers, supporting the diagnosis of BD. Pathergy test was positive and he was diagnosed as BD according to the history, physical examination and laboratory findings. Monthly intravenous cyclophosphamide pulses combined with high dose methyl-prednisone were initiated and followed by prednisolone 2 mg/kg/day. Afterwards, left lower lobectomy was performed. Pathological examination revealed PAA with thrombus in the lumen, fibrosis and lymphoplasmacytic inflammatory cell infiltration adjacent to small- and medium- sized vessels (Figure 3). He was clinically well after lobectomy and admitted for the second pulse immunosuppressive therapy. Meanwhile, CT angiography was performed to evaluate the aneurysm at the right lower lobe which showed regression of PAA from 16 mm to 6 mm in diameter. Endovascular embolization was planned for the right lower lobe PAA. However, unfortunately, he presented with massive hemoptysis five days later. The patient passed away with massive hemoptysis originating from the right lower lobe PAA. 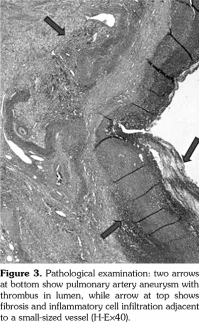 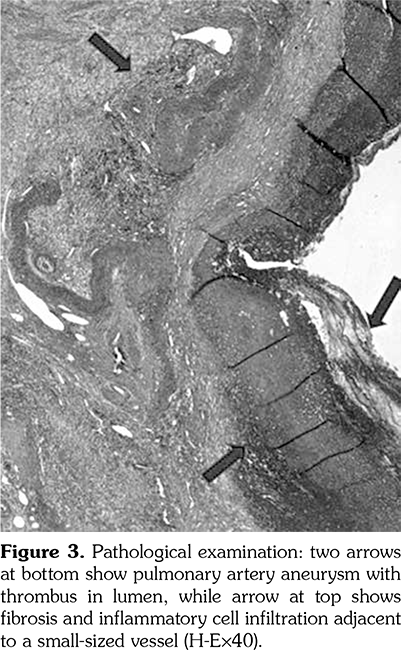 Behçet’s disease is characterized by chronic perivascular inflammation. It is more common in the male sex. Male sex and early onset disease are associated with poor prognosis. The main manifestations of BD are oral and genital ulcers. BD may affect many other organs such as eyes, skin, and joints.[1,2] Major vessel involvement occurs in 20 to 30% of BD. It mainly affects venous vessels and presents with thrombosis.

Pulmonary manifestations including vascular and parenchymal involvement occur in 1 to 7% of all cases. Pulmonary complications develop mainly in the first few years of the onset of the disease and have male predominance. There is no specific distribution in terms of age; a retrospective analysis of BD patients showed that the mean age was similar in patients with and without pulmonary involvement.[5] Pulmonary vascular involvement may be arterial or venous. PAA is rare in BD; however, PAA is the most typical manifestation of pulmonary artery complications of BD. Hemoptysis is the most common and typical symptom, followed by dyspnea and cough. Patients with PAA usually present with massive hemoptysis, PAAs with a diameter >3 cm are associated with a high risk of mortality.[3] On the other hand, the most common causes of hemoptysis in childhood are infections. In a study examining the causes of hemoptysis in children, the frequency of vascular anomalies was only 6%.[6] Although vascular anomalies rarely cause hemoptysis, they should be considered in the differential diagnosis as they can cause life-threatening bleeding. PAA is usually located bilaterally in branches of the lower lobes.[1,2,7-9] Our patient also had bilateral PAA. This finding was consistent with the results of a study reporting 47 BD patients with pulmonary artery involvement, which revealed bilateral PAA with a rate of 57% in patients.[10] PAA is a significant cause of mortality in BD; despite treatment, unfortunately, the mortality rate is 25%.[3]

Diagnosis depends on clinical findings. International Society for BD proposed criteria for diagnosing BD. These criteria require the presence of recurrent oral ulcers plus two of the following symptoms in the absence of other systemic diseases: recurrent genital ulcerations, eye lesion, skin lesions (erythema nodosum, papulopustular lesions, or acneiform nodules), or a positive pathergy test. Our patient had recurrent oral and genital ulcers and positive pathergy test fulfilling the diagnostic criteria.[1,2,7,11] If the symptoms start before the age of 16, it is defined as pediatric BD. According to the diagnostic criteria for pediatric BD, individuals who have three of six items (recurrent oral and genital ulceration, skin, ocular, neurological or vascular involvement) are defined to have pediatric BD.[7] Our patient’s symptoms started before the age of 16 and he had three symptoms (oral and genital ulceration and vascular involvement) that confirmed the pediatric BD as well.

Symptom control and suppression of inflammation are the mainstays of the management. Interventional treatments such as embolization and lobectomy may have been necessary for patients refractory to medical treatments.[12,13] PAA in the left lower lobe of our patient was huge, thus lobectomy was the best therapy option, and it was performed after cyclophosphamide pulse therapy. Although the size of PAA in the right lower lobe reduced to 6 mm, the patient had a massive hemoptysis attack before endovascular embolization. Bilateral lower lobectomy may be a better treatment option in our case with giant PAAs. In a study on nine patients who underwent surgical treatment, Tuzun et al.[14] concluded that four out of six patients who underwent lobectomy were still alive and that lobectomy was an acceptable method in patients who did not respond to medical treatment.

Consequently, there are only a few childhood BD case reports presented with PAA in the literature.[15-18] This case highlights the importance of considering BD in pediatric patients with hemoptysis. BD with PAA is associated with a high risk of morbidity and mortality and should be treated promptly.