Takayasu arteritis (TA) is classified as a large vessel vasculitis of predominantly aorta and its main branches, resulting in fibrosis and stenosis. Only a minority of TA patients are diagnosed in pre-stenosis phase when constitutional symptoms including fever, arthralgia, weight loss, headache, abdominal pain, and elevated acute phase reactants are dominant insidious characteristics. In this article, we present a 12-year-old female patient, who was referred to our department with a one-year history of low-grade fever, fatigue, and myalgia. Physical examination did not reveal pulse and blood pressure discrepancies between any extremities. Acute phase reactants were markedly elevated, and autoantibodies were negative. Magnetic resonance angiography (MRA) findings have confirmed TA diagnosis with prominent vessel wall thickening in the ascendant and abdominal aorta, focal ectasias and a thoracoabdominal fusiform aneurysm. As methotrexate and methylprednisolone treatment during three months was unsuccessful, infliximab was induced. During the next 12 months, patient had clinical improvement, but worsening of MRA findings and new onset of carotidynia forced us to switch methotrexate to mycophenolate mofetil. Six months later, laboratory and radiological remission were achieved. In conclusion, we report a challenge to diagnose pre-pulseless childhood-TA (c-TA) in the state of prolonged fever with no signs of vascular stenosis, systemic hypertension, pulses and blood pressure discrepancies, bruits and claudication. Therefore, we wish to discourse the importance of early diagnosis of TA since, to our knowledge, there are no studies investigating treatment success only in the early phases of c-TA.

Takayasu arteritis (TA) is classified as a large vessel vasculitis of predominantly aorta and its main branches, characterized by granulomatous vessel wall inflammation resulting in fibrosis and stenosis. It is very rare in pediatric age with an estimated incidence of 2.6/1,000,000.[1-3] The most common late-term findings are hypertension, claudication of extremities and pulselessness, stroke and aneurysm or stenosis of several arteries.[4-7] Constitutional symptoms including fever, arthralgia, weight loss, headache, and abdominal pain and elevated acute phase reactants are characteristic for pre-pulseless (stenosis) TA.[1] Only 33% of TA patients are diagnosed in pre-pulseless phase, despite the advances in imaging techniques and awareness of the disease in the last decade.[4] Mortality rates significantly decreased thanks to improvements in TA management, nonetheless 57.4% of childhood- TA (c-TA) patients still undergo revascularization procedures.[8,9]

Fever of unknown origin (FUO) is defined as fever higher than 38.3°C, lasting more than three weeks in a patient whose diagnosis cannot be established after one-week hospitalization.[10] In this article, we present a patient with FUO with established pre-pulseless c-TA, who was successfully treated with mycophenolate mofetil (MMF), infliximab, and concomitant steroids.

A 12-year-old female patient was hospitalized in another center with a two-month history of fever, weight loss, fatigue, and generalized myalgia. She had a painful, hyperemic, firm and indurated lesion on the inner face of right thigh, which had been determined as superficial thrombophlebitis by ultrasonography and skin biopsy. The patient had been subsequently treated with systemic steroids for three months and was referred to our department since low- grade fever, myalgia and fatigue relapsed after suspension of systemic steroids. A written informed consent was obtained from the patient and her legal guardians.

After TA diagnosis was established, systemic methylprednisolone (2 mg/kg/day) and methotrexate (15 mg/m2 per week) were initiated. Three months later, current therapy did not alleviate the systemic symptoms, so an anti-tumor necrosis factor-alpha agent infliximab (7 mg/kg), was added. After six months, methylprednisolone could be gradually tapered to 0.3 mg/kg per day. One year after the initiation of infliximab, carotid Doppler ultrasonography was repeated due to new onset of carotidynia and revealed diffuse stenosis in bilateral common carotid arteries. Furthermore, MRA showed the fusiform thoracoabdominal aneurysm and progression of abdominal aortitis (Figure 1b). We decided to switch methotrexate to MMF (600 mg/m2/day). Six months later under MMF, infliximab and low-dose of systemic methylprednisolone treatment, MRA showed complete regression of wall thickening in the abdominal aorta (Figure 1c). The laboratory results of the patient were summarized in Table 1. 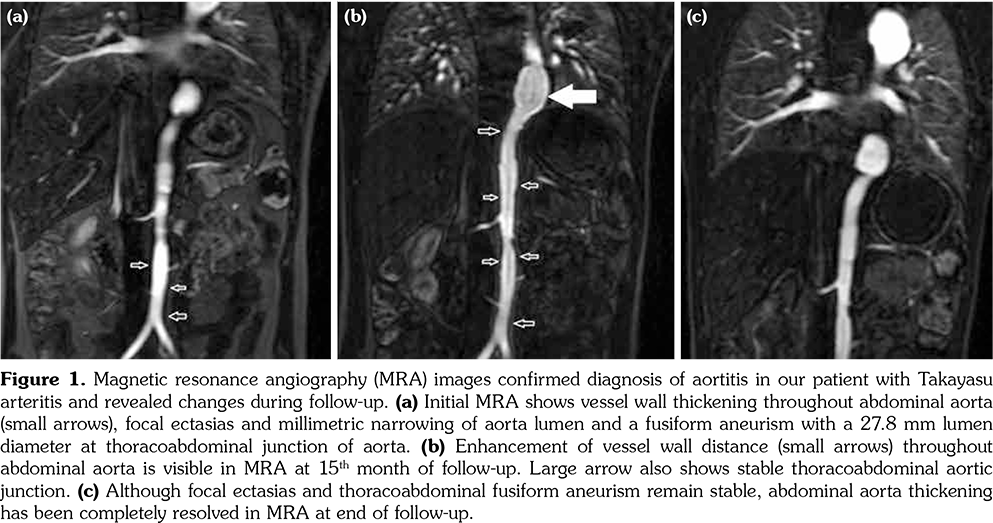 Table 1. Laboratory results of patient with childhood-Takayasu arteritis at diagnosis and follow-up
×

Diagnosis of TA is particularly difficult in pre- pulseless phase due to the absence of a specific laboratory test, autoantibodies or biomarkers.[1,2] Establishing an early pre-pulseless TA can be utilized by consideration of the possible pre- pulseless TA in patients with systemic symptoms and elevated acute phase reactants.[11] Conventional angiography was previously the gold standard imaging technique in TA diagnosis, but European League Against Rheumatism (EULAR) now recommend MRA to provide information about mural thickness and contrast enhancement with luminal changes.[12] For accurate diagnosis and classification of c-TA, Single Hub and Access point for pediatric Rheumatology in Europe (SHARE) initiative favors EULAR/Paediatric Rheumatology International Trials Organisation/ Paediatric Rheumatology European Society (EULAR/PRINTO/PRES) criteria, in which the diagnosis depends on one major criteria of typical angiographic abnormalities, and at least one minor criteria, including pulse deficits, blood pressure discrepancy between any extremities, bruits, arterial hypertension and elevated acute phase reactants (erythrocyte sedimentation rate ≥20 mm/hour or C-reactive protein ≥6 mg/L).[13,14]

Due to the difficulties to establish an accurate diagnosis of TA, particularly in pediatric cases where a significant proportion of patients do not meet the aforementioned classification criteria, diagnosis of c-TA is an important challenge in everyday clinical practice. A recent cohort, including 71 c-TA patients, emphasized this issue by declaring that 26.8% of participants had a misdiagnosis at disease onset. Majority of misdiagnoses included aortic coarctation and rheumatic fever, whereas only one patient had been diagnosed as having FUO before c-TA.[15] TA has been occasionally reported in adults with FUO.[16-18] Due to the rarity of cases with FUO eventually diagnosed with c-TA, we think that there is still an underestimation of early manifestations of TA.

Corticosteroid (CS) is the mainstay of TA treatment; however, a significant proportion of the patients do not respond to CS and require additional immunosuppressive drugs and biological agents.[4,5] Methotrexate, cyclophosphamide, azathioprine and MMF were the most prescribed immunosuppressive agents, whereas infliximab, and tocilizumab are promising biological agents.[3,8] A recent adult study suggested that MMF may be a cornerstone agent in TA treatment for better long-term outcome and safety profile.[19] With this regard, since our patient did not respond to the combination therapy with methotrexate and infliximab in addition to glucocorticoids, we were forced to switch methotrexate to MMF, with complete clinical, radiological and laboratory remission.

In conclusion, this report highlights a diagnostic challenge of a child with FUO, which resulted in c-TA diagnosis during pre-pulseless phase. Besides, the patient had no signs of vascular stenosis, including systemic hypertension, discrepancy in pulses or blood pressure, bruits and claudication. We also emphasize the favorable response to concomitant MMF, infliximab and systemic methylprednisolone therapy in the early phase of the disease. Further multicenter studies including pre-pulseless patients are needed to clarify the long-term treatment outcomes of c-TA.