Takayasu Arteritis: A Case Presenting With Neurological Symptoms and Proteinuria

In this article, we present an 18-year-old female patient who was initially diagnosed as central nervous system vasculitis and focal segmental glomerulosclerosis but later diagnosed as Takayasu arteritis.

In this article, we report a patient who was initially diagnosed as central nervous system vasculitis and focal segmental glomerulosclerosis (FSGS) and who turned out to have TA during follow-up.

A 14-year-old female patient referred to our clinic with headache and dizziness for two weeks and loss of consciousness for about 10 minutes. On admission, the blood pressure was 90/60 mmHg and all peripheral pulses were palpable. Her body weight was above 97th percentile for her age and body mass index was 33. The fundus examination and other organ systems were essentially normal. Laboratory studies revealed erythrocyte sedimentation rate (ESR) as 108 mm/hour and C-reactive protein (CRP) as 7.5 mg/dL (0-0.8), while other measurements were normal. Urinalysis revealed microscopic hematuria and proteinuria of 31.9 mg/m2/hour in 24-hour urine collection. The cerebrospinal fluid examination showed no abnormalities. Cranial magnetic resonance imaging (MRI) showed multiple millimetric hyperintense deep white matter lesions on T2-weighted imaging (Figure 1). Intracranial and extracranial arteries were normal in magnetic resonance angiography (MRA). Renal biopsy findings were interpreted as FSGS (Figure 2). Patient was considered as cerebral vasculitis and incidental FSGS. Pulse methylprednisolone therapy for three consecutive days was initiated and continued with oral prednisolone. At four years of follow-up, proteinuria decreased to 5-15 mg/m2/hour, and ESR and CRP were normal. Repeated brain MRI and MRA examinations showed no new lesions. Four years later, at the age of 18, on a routine examination, both radial artery pulses were absent and the blood pressure could not be measured. Significant bruit was heard on the left carotid artery. Laboratory studies revealed ESR as 43 mm/hour and CRP as 2.46 mg/dL. Aortic MRA revealed diffuse wall thickening and contrast enhancement in the arcus aorta and its many main branches (Figure 3). Takayasu arteritis diagnosis was established according to the European League Against Rheumatism/ Paediatric Rheumatology International Trials Organisation/Paediatric Rheumatology European Society criteria.[2] Methotrexate was begun, and daily prednisolone was continued. Four months after the diagnosis of TA, left-sided hemiparesis developed. Brain MRI demonstrated a wide cerebral infarct at the right anterior vascular territory (Figure 4). Brain and neck computed tomography angiography showed total occlusion of the right internal carotid artery. Vascular involvement of the right common carotid artery was progressed to preocclusive stenosis. Diameters of the right anterior and middle cerebral arteries were thin and fed by the posterior and anterior communicating arteries (Figure 5). Tocilizumab treatment was started at 8 mg/kg every four weeks. At follow- up with 2.5 years of tocilizumab treatment, the patient's clinical condition improved slightly, and no new symptoms developed. A written informed consent was obtained from the patient. 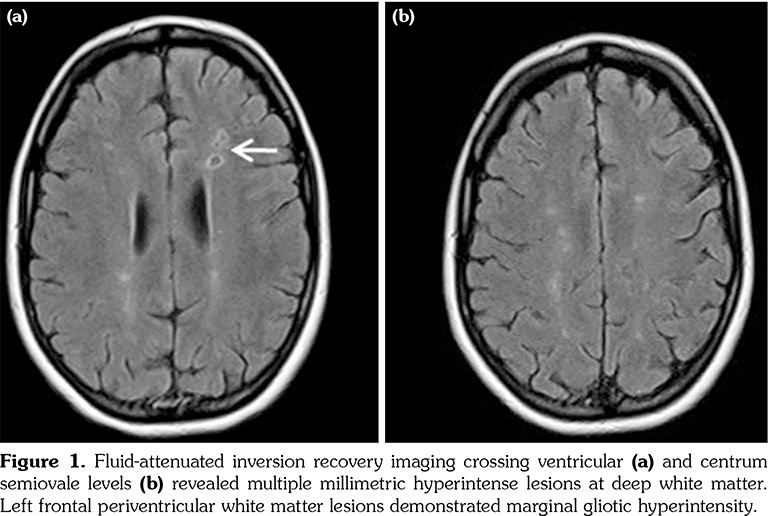 Figure 2. Eleven glomeruli with mild lobulation and mesangial hypercellularity. Three glomeruli had global sclerosis and four-five glomeruli had segmental sclerosis. Negative results were obtained for immunoglobulins G, M and A, complement factors 3 and 1q, fibrinogen, kappa, and lambda by immunofluorescence.
× 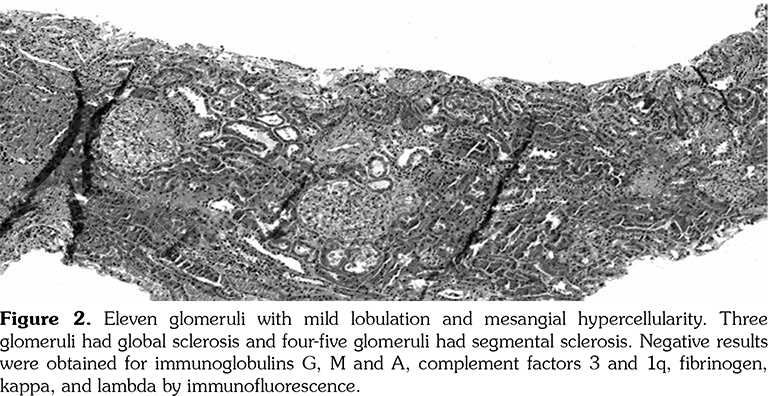 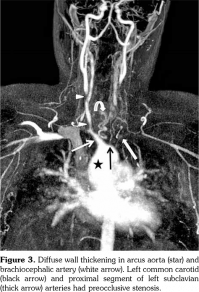 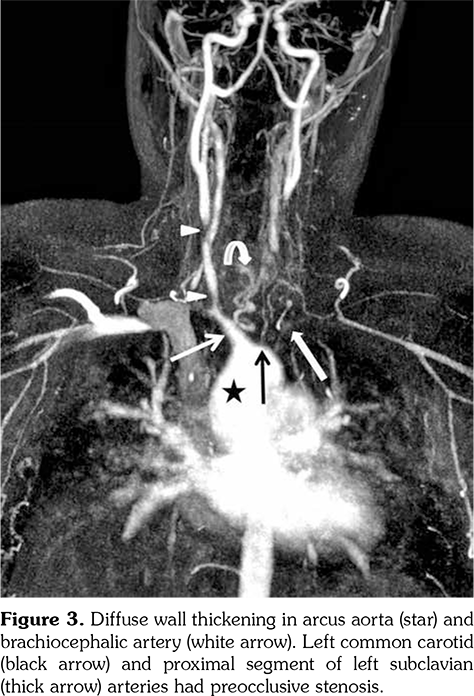 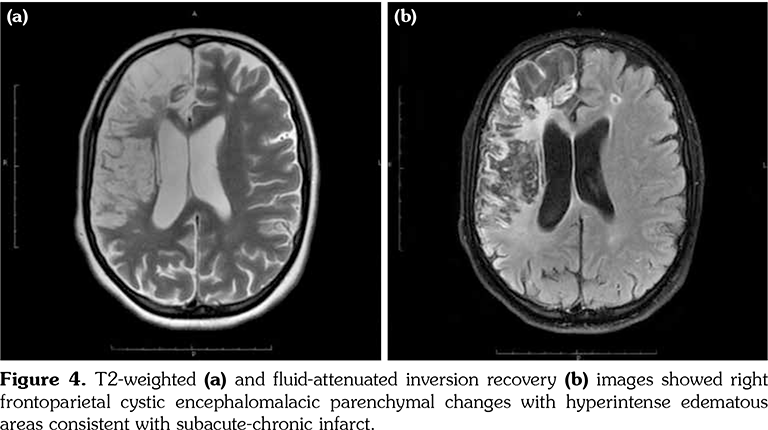 Several causes of ischemic stroke in patients with TA have been described, including embolism from stenotic or occlusive lesions in the aortic arch and its main branches or cardiac diseases.[6] In addition, intracranial stenosis have been observed as a consequence of vasculitic involvement or a prior embolization into the vessel. In our patient, based on the MRI scan, this cerebral accident seemed to be a vascular occlusion.

Renovascular hypertension is the most common renal manifestation of TA; however, proteinuria and nephrotic syndrome are both very rare and usually caused by factors other than FSGS. Four years before the diagnosis of TA, our patient was diagnosed as cerebral vasculitis. In the same period, renal biopsy performed due to proteinuria was reported as FSGS. Cerebral vasculitis and TA in our patient may be coincidental with FSGS but it was supposed that immune complex deposition and vascular lesions caused glomerular ischemia in TA.[7] Kuroda et al.[8] reported a 50-year-old female patient with TA who developed proteinuria and renal dysfunction with glomerulopathy mimicking membranoproliferative glomerulonephritis. They argue that increased vascular endothelial growth factor and interleukin (IL)-6 levels may cause renal disease.

Microvascular involvement might lead to glomerular ischemia and obesity might be an additional factor for developing FSGS in our patient. FSGS is a pattern of histologic injury rather than a disease. In obese patients, elevated plasma levels of leptin through upregulation of transforming growth factor beta 1 may also predispose to glomerulosclerosis.[9]

The clinical manifestations of TA can be very insidious in childhood and the diagnosis is often delayed. Therefore, the time between symptoms and diagnosis can last up to 2-11 years. Disease may be more resistant to treatment than adults. [1,10]

Corticosteroids remain the mainstay of treatment in TA and conventional immunosuppressive drugs have been used together with steroids while biologics have also been tried.[11] It was reported that 88% of patients were inadequately controlled with conventional immunosuppressive therapy and overall response to biological-targeted drugs (tumor necrosis factor-alpha antagonists or tocilizumab) at 6 and 12 months was 75% and 83%, respectively.[12]

Serum levels of IL-6 have also been shown to correlate with disease activity.[13] Tocilizumab, a humanized anti-IL-6 receptor inhibitory monoclonal antibody, is effective in inducing remission for patients with refractory TA.[14]

When our patient was diagnosed with TA, there was no evidence of newly developing cerebral vasculitis and organ involvement other than the aortic arch and main branches. Therefore, treatment was started with steroid and methotrexate. Tocilizumab was added to the treatment when stroke developed and vascular involvement worsened. While receiving this treatment, the clinical condition of our patient was partially improved, the acute phase reactants returned to normal at the sixth month and remained stable for two-and-a-half years.

Takayasu arteritis is a relatively rare disease and vascular changes may progress under the treatment with steroid and immunosupressive drugs. Thus, tocilizumab therapy may be effective in patients with refractory TA.