Systemic lupus erythematosus (SLE) is a generalized autoimmune disorder characterized by T and B cell hyperactivity with autoantibodies against numerous cell components and deposition of immune complexes. The disease has a multifactorial pathogenesis with genetic, hormonal and environmental components.(1) Regulatory T cells play an important role in the maintenance of immune tolerance to self and in the pathogenesis of autoimmune disease. Transforming growth factor-beta 1 (TGF-β1) is a regulatory cytokine with pleiotropic properties in immune responses.(2) TGF-β1 is the most potent naturally occurring immunosuppressant. TGF-β1, which belongs to the TGF-β family of proteins, is secreted by a variety of cell types with unique and potent immunomodulatory properties in the maintenance of normal immunological homeostasis.(3) TGF-β1 displays multiple functions which, depending on the responding cell type and the state of differentiation, are sometimes opposing.(4) Preliminary human studies suggest that TGF-β1 expression in SLE may be dysregulated. Production of TGF-β1 by lymphocytes isolated from SLE patients is reduced compared with that in control individuals.(5) And this may contribute to the characteristic T cell dysregulation and aberrant B cell stimulation in SLE patients.(6) Therefore, in this study, we aimed to assess the role of TGF-β1 in SLE.

The study was conducted between May 2015 and December 2016 and included 40 female Egyptian SLE patients (mean age 25.5±6.2 years; range 15 to 39 years) diagnosed according to the American College of Rheumatology criteria(7) from Internal Medicine and Rheumatology & Rehabilitation Outpatient Clinics. Thirty female age-matched healthy controls (mean age 26.2±5.9 years; range 16 to 39 years) from a similar ethnic background were also included. Clinical activity was assessed at the time of venipuncture using the Systemic Lupus Erythematosus Disease Activity Index (SLEDAI). The study protocol was approved by the Faculty of Medicine, Cairo University Ethics Committee. The study was conducted in accordance with the principles of the Declaration of Helsinki.

Patients were diagnosed with lupus nephritis if they met the following criteria for renal disorder: (i) persistent proteinuria of 0.5 gm/24 hour (or more than +3 dipstick reactions for albumin), or (ii) cellular casts including red blood cell, granular, renal tubular epithelial cell or mixed cellular casts.(8) Patients with malignancy or other autoimmune diseases were excluded. 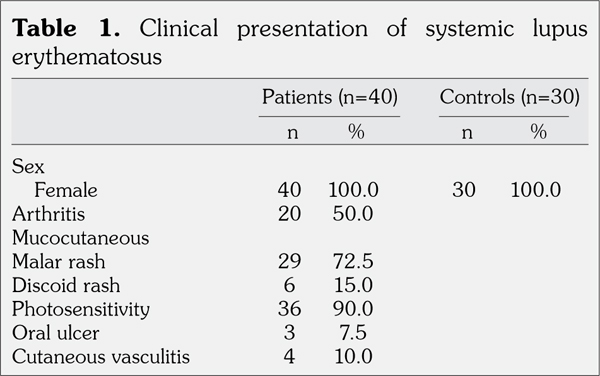 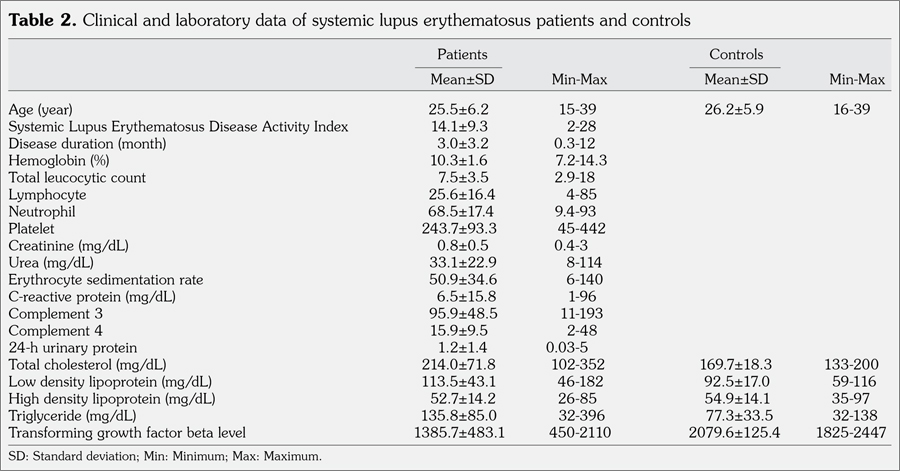 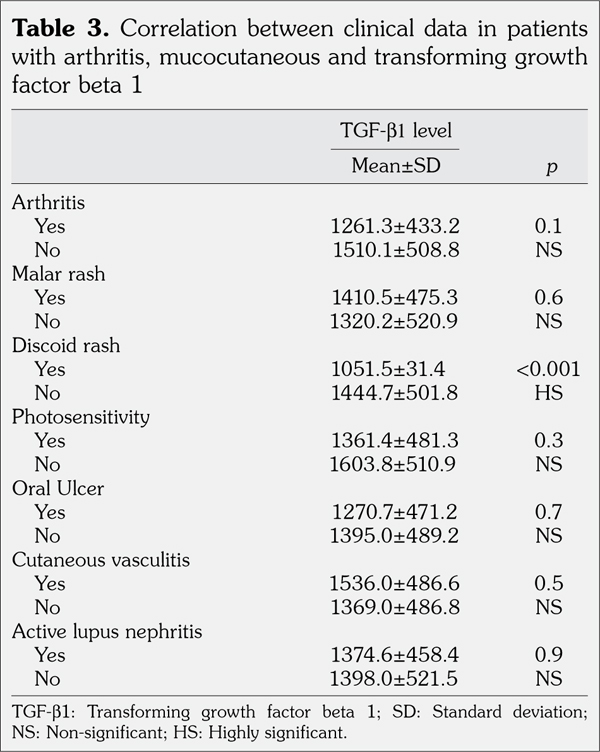 All SLE patients were on hydroxychloroquine at a dose of 5 mg/kg. Of the patients, 20% were on low dose steroid, 15% were on moderate dose of steroids, 48% were on maintenance therapy of azathioprine 2.5 mg/kg, 30% were on cyclophosphamide induction therapy (500 mg every two weeks), and 22% were on mycophenolate mofetil 2 gm/day. 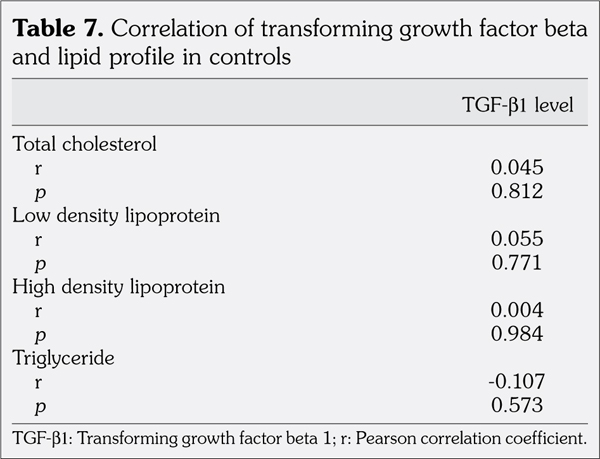 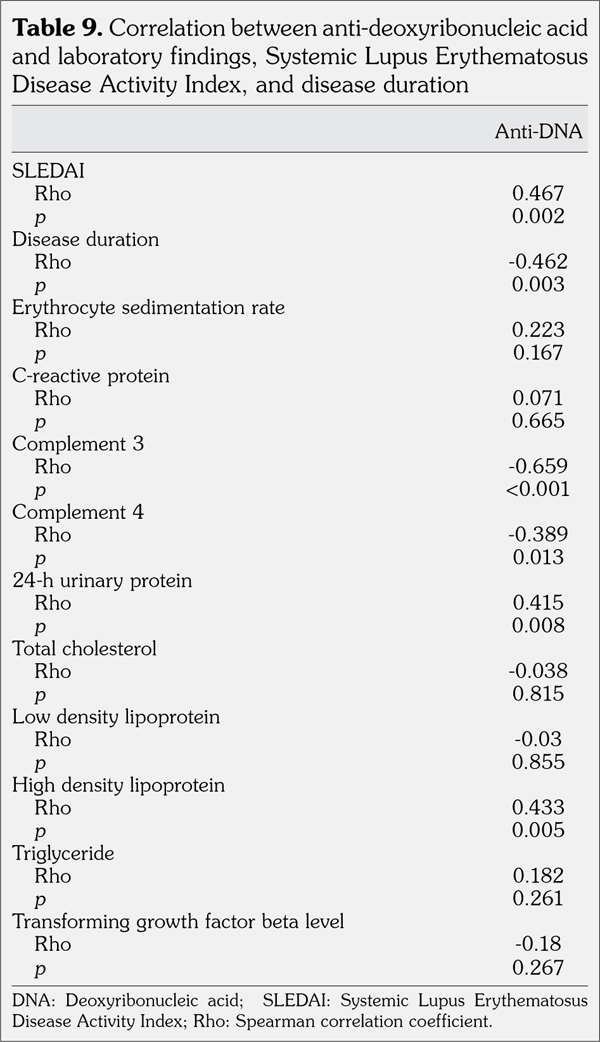 Transforming growth factor-beta 1 was not statistically significantly correlated with serum cholesterol, triglyceride, or LDL levels in the control group (p>0.05) (Table 10). There was no statistically significant difference in TGF-β1 level between patients with high or low disease activity, between those with proteinuria of >3 g or <3 g, and between those with serum creatinine of >1.2 g/dL or <1.2 g/dL (Table 11, 12, 13).

Systemic lupus erythematosus is a complex auto- immune disorder which involves various facets of the immune system. In addition to autoantibody production and immune complex deposition, emerging evidences suggest that cytokines may act as key players in the immunopathogenesis of SLE.(9) Regulatory T cells play an important role in the maintenance of immune tolerance to self and in the pathogenesis of autoimmune disease. TGF-β1 is a regulatory cytokine with pleiotropic properties in immune responses.(2)

A number of circulating cytokine abnormalities have been reported in SLE and recent advances have revealed new insights in cytokine regulation of autoimmune inflammatory responses. In particular, the production of interleukin-10 and TGF-β1, the two main regulatory T cytokines that suppress the inflammatory response, has been found to be deeply deregulated in SLE patients, so they have been considered essential elements in the etiopathology of the disease.(10) TGF-β1 is a highly pleiotropic cytokine with an important role in maintaining immune homeostasis.(11) TGF-β1 is involved in many critical cellular processes, including cell growth, extracellular matrix formation, cell motility, hematopoiesis, apoptosis and immune function.(12) TGF-β1 has pronounced antiinflammatory and immunosuppressive functions, the latter being realized by controlling the activation, proliferation, differentiation and survival of all effectors immune cells.(13)

In our study, there was a statistical significant difference in serum TGF-β1 levels between SLE patients and controls with lower values detected in SLE patients with a p value less than 0.001. This was in agreement with the results of Becker-Merok et al.,(14) who revealed that patients with SLE had lower levels of TGF-β1 (p=0.01) and interleukin-1β (p=0.0004) compared to controls.

Discoid LE may occur either as a cutaneous eruption without systemic disease or as part of SLE. In biopsy specimens of discoid LE, CD4+ T cells are the predominant cells.(15) Three distinct subsets of T-helper lymphocytes that vary in their cytokine expression patterns have been identified in mice and humans:(16) T helper 1 (Th1), and Th2. In our study, there was a statistically significant difference in TGF-β1 between SLE patients with (1051.5±31.4) or without (1444.7±501.8) discoid rash, with lower value in those with discoid rash with a p value less than 0.001. This was in agreement with Antiga et al.,(17) who concluded that the down regulation of TGF-β1 and interleukin-10 in discoid LE may lead to defective immune suppression and thus to the generation of the tissue injury that is found in lupus patients.

Transforming growth factor beta 1 is a multifunctional growth factor peptide reported to be involved in many physiologic and pathologic processes, such as vascular remodeling and atherogenesis.(19)

In our study, we found 21 patients with active nephritis, while we detected no statistically significant difference in serum TGF-β1 between active and non-active lupus nephritis group. Moreover, there was no statistically significant difference in TGF-β1 levels between patients with proteinuria more or less than 3 g. This was in contrary to Jin et al.,(21) who showed significantly lower levels of total TGF-β1 in patients with severe renal damage, i.e. lower TGF-β1 in patients with 24-hour urine protein of over 3.5 g than in those with below 3.5 g (p<0.05). This may be related to sample size as his sample included 150 SLE patients.

Renal TGF-β1 is a key mediator of glomerular and tubulo-interstitial pathobiology in renal diseases. Over expression of TGF-β1 isoforms and their receptors in the kidney of experimental animals are closely linked to renal fibrosis, a characteristic feature of progressive proteinuric nephropathies.(21)

The limitation of this study was our small sample size. Therefore, further studies with larger sample sizes are required to investigate the role of TGF-β1 in SLE.