Behçet’s disease (BD) is an inflammatory and multisystemic disease with spontaneous remissions and relapses similar to various autoimmune diseases. BD was originally observed along the ancient Silk Road and with the highest prevalence in Turkey and the Mediterranean basin. However, it has been observed throughout the world due to excess number of immigrations.(1)

The cause of BD is unknown. It is believed that this auto-immune process is triggered by infectious or environmental agents in a genetically predisposed individual.(2) The etiology and pathogenesis of BD is complex, as it is a polygenic disease with multiple genetic factors linked to the pathogenesis of the disease. Human leukocyte antigen B (HLA-B)*51 is a well-known allele which affects the susceptibility to diseases.(3) However, less is known about other possible non-HLA alleles. Among these, major histocompatibility complex (MHC) class I MHC class I polypeptide-related sequence A (MICA), which is a member of the non-classical MHC protein-encoding family, is commonly observed in BD patients.(4)

MICA gene exhibits remarkable allelic diversity(5) and MICA polymorphisms have been shown to be associated with a number of pathophysiological disorders, including malignancy, pathogen infection, autoimmune disease, and allograft rejection or graft-versus-host disease upon allogeneic transplantation.(6-8)

MICA, HLA-related gene located at the 46 kb centromeric region of HLA-B, contains six exons, including a tri-nucleotide repeat polymorphism in the transmembrane (TM). MICA has been proposed as a candidate gene for BD susceptibility. The MICA-TM microsatellite polymorphism is present in the exon 5 with eight alleles (A4, A5, A5.1, A6, A7, A8, A9, and A10). Other alleles are defined as polymorphisms in exons 2, 3 and 4. Mizuki et al.(9) showed a relationship between BD and HLA-B*51 (44 of 77 BD patients).(10) However, the relationship between BD and MICA-A6 triplet repeat (57 of 77 BD patients) was stronger. In other words, MICA rather than HLA-B*51 confers genetic susceptibility in BD.

MICA proteins do not associate with beta2 microglobulin and do not need to bind peptides to be expressed on the cell surface. In response to stress, MICA proteins are expressed in gastric epithelium, endothelial cells, and fibroblasts and bind to cell receptors of CD8+α-β T cells, γ-δ cells, natural killer (NK) cells and T CD4+ cells through NK group 2 member D (NKG2D) receptors in order to activate them.(11,12) The genetic and structural allelic variability of MICA molecules may affect the interaction of receptors and thus the effector function of the defense cells. The expression of MICA molecules under stress seems to be associated with several diseases and the immune response against transplants.

The study included 38 Turkish patients with BD (20 males, 18 females; mean age 34±10.9 years) who fulfilled the International Study Group diagnostic criteria for BD and 51 healthy controls (30 males, 21 females; mean age 36±12.8 years) enrolled at the outpatient clinic of BD, the Department of Dermatology and Department of Ophthalmology between June 2011 and June 2012. The mean duration of disease was 7.1 years (range, 1-20 years). We questioned the positive family history of patients. We performed tissue typing for the unrelated controls, who had been previously enrolled to our laboratory for volunteer bone marrow donation. Controls were questioned about their previous autoinflammatory or inflammatory immunediseases.Itiswell-knownthatallpatients and controls are not genetically related to each other. The clinical data of all study participants were recorded. The study protocol was approved by the Atatürk University Faculty of Medicine Ethics Committee. A written informed consent was obtained from each patient and control. The study was conducted in accordance with the principles of the Declaration of Helsinki.

The genomic deoxyribonucleic acid (DNA) isolation was performed by using an automated DNA isolation device (MagNA Pure LC DNA Isolation Kit I, Roche, Germany). MICA alleles were determined in all subjects by using flow cytometer-like instrument (LABSCANTM 200, Luminex Corporation, Austin, TX, USA) with the help of the Luminex technology. Luminex 100 IS Software was used for the data analysis. LABType sequence-specific oligonucleotide (SSO) MICA test from One Lambda (Canoga Park, CA, USA) was used for the typing. Genotype determination and data analyses were performed by using the HLA Visual software (One Lambda) according to the manufacturer’s instructions. LABType SSO MICA test from One Lambda is a reverse sequence-specific oligonucleotide (rSSO) DNA typing assay in which SSO probes and color-coded microspheres are used in order to identify MICA alleles. A single multiplex polymerase chain reaction simultaneously amplified exons 2, 3 and 4-5. LABType SSO MICA test provided typing for 61 out of 87 MICA alleles described so far and can be found at http://hla.alleles.org/alleles/classo.html (the international ImMunoGeneTics information system/HLA database, September 2017). BD patients and controls were typed for HLA-B by using SSO B locus tests from Gene-Probe, using Luminex technology.

The allele frequencies were estimated by direct counting. The differences between patients and controls in terms of alleles were estimated by using the Fisher exact test. The risk of developing BD in individuals was calculated by determining the odds ratio (OR) with the help of the software OpenEpi (Version 3.01, Updated 2013). The level of significance was set at p<0.05. The 95% confidence interval (CI) was also calculated. Hardy-Weinberg and linkage disequilibrium (LD) were tested by using the method described by online tool ShesisPlus.

Demographic and clinical characteristics of participants are summarised in Table 1. A total of 16 MICA alleles were found in BD patients and controls. The frequencies of MICA alleles were shown in Table 2. According to the analysis of MICA gene, MICA*009 was the most frequent allele in both groups. The gene frequency of MICA*006 was significantly higher among BD patients compared to controls (14.5% vs. 0.9%; OR: 17.092; 95% CI [2.155~135.554]; p<0.05). 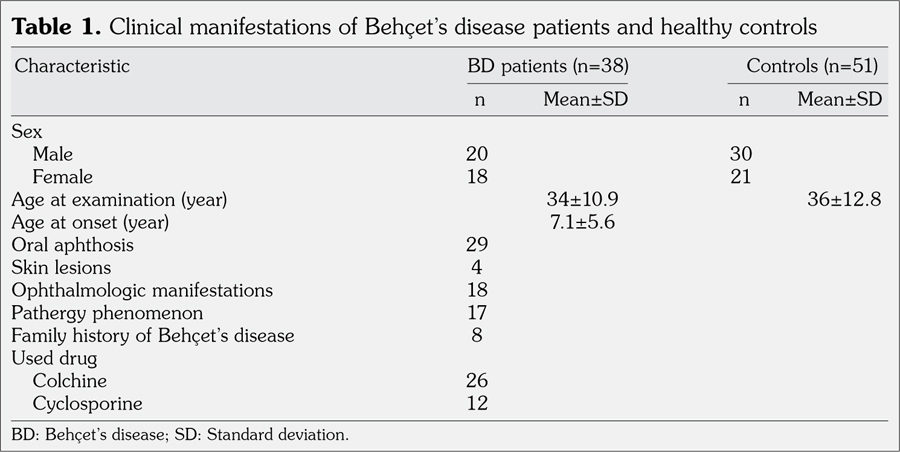 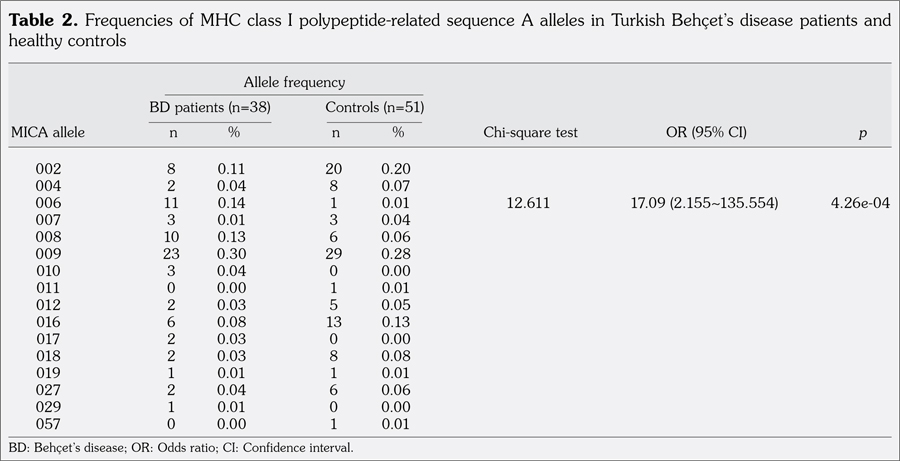 Table 4. Association between MHC class I polypeptide-related sequence A and human leukocyte antigen B alleles in Turkish Behçet’s disease patients and healthy controls
×

Behçet’s disease is characterized by recurrent oral aphthous ulceration and developing of multisystemic involvements. The prevalence of BD was 42/10,000 in 2003 (95% CI, 34-51/10,000) in Istanbul, Turkey.(14) Certain genes are directly responsible for BD, or they can indirectly induce the underlying inflammatory changes. Etiologic role of the MICA molecule polymorphisms is still unknown. Several MICA alleles have been shown to alter the binding affinity of NKG2D, suggesting that they may exert a functional effect on immune activation. It has been well-established that BD is associated with the HLA-B*51 molecule, which has a relatively high incidence (ranges from 40 to 80%) in many ethnic groups including the Asian and European populations.(15)

Similar to previous studies, we found that HLA-B*51 was strongly associated with BD. However, in the control group, HLA-B*51 frequency was significantly higher compared to other alleles. The reason for this can be that HLA-B*51 is the second most common allele in the Turkish population. The HLA-B*51 coding sequence has been analyzed and single or multiple nucleotide substitutions have been detected. This allows the identification of >89 different subtypes of HLA-B*51.(16) We showed that the HLA-B*5101 is the major suballele in both patients and controls (unpublished data). However, this finding cannot explain the different immunopathogenic roles of HLA-B*51 subtypes in our study.

According to our results, HLA-B*52 frequency was significantly higher in the control group compared to patients. Previous studies showed that MICA-A6 was linked to HLA-B*52. It is known that B*5101 differs from B*5201, which is a split antigen of HLA-B5 and is not associated with BD. There are two amino acids in positions 63 and 67 inside the antigen-binding groove. Furthermore, we observed that HLA-B*52 was not associated with MICA*006. Based on these findings, we may state that there are different linkage models in patients and controls in terms of MICA and HLA-B*52 genes. MICA*009 was found in LD with HLA-B*52 in controls but not in BD patients.

Although the role of polymorphisms in the region of HLA gene is still under debate, the potential correlation between the MICA-TM and the development of BD has been investigated in different ethnic groups, including East Asian, Caucasian, and Middle Eastern populations from Japan to Israel.(17) It is meaningful to associate the HLA-B*51 positivity with BD. In our study, MICA*006 was observed in patients with HLA-B*51 positivity whereas HLA-B*51 positive controls did not carry the MICA*006 allele. Meta- analyses performed by Lee and Song(18) showed a significant association between the MICA*006 allele and BD (OR: 1.652, 95% CI: 1.409-1.937, p<1.0∞10-(8)), the individual carriers of this allele had a 2.43-fold higher risk of having BD than those individuals not carrying the allele.

Our study has some limitations. BD patients who were admitted to the hospital were included in the study. This genetic base study should be further performed with higher number of patients and a more comprehensive multicenter study should be planned. MICA and HLA-B genes are mostly associated with BD in the literature. Therefore, we evaluated these genes in our study. However, the whole exome sequencing should be further performed in our BD patients in order to investigate the role of rare variants in BD.

In conclusion, we examined the frequency of HLA-B*51 and MICA genes in a Turkish BD patient population. There are a limited number of studies related to the genetic background of BD. Therefore, our study is important despite its limitations with respect to the population size. Despite the limited population, this series is of significant value since few studies investigated the genetic characteristics of diseases in Turkey. Results of our study and other studies suggest that the MICA*009 and MICA*006 alleles might be used as a diagnostic marker of BD in the future, particularly in the HLA-B*51 positive Turkish population. The prevalence of BD depends on the geographic region and the ethnicity. Therefore, multicenter studies are needed to validate the high prevalence of these polymorphisms in different regions.

This study was supported by the Ataturk University Scientific Research Projects (grant number: 2011/11).