Panniculitis, A Rare Presentation of Onset and Exacerbation of Juvenile Dermatomyositis: A Case Report and Literature Review

Juvenile dermatomyositis (JDM) is an autoimmune disorder characterized by systemic vasculopathy, predominantly involving the muscles and skin with onset during childhood.(1) Pathognomonic cutaneous manifestation may be helpful for the diagnosis of JDM, such as Gottron papules, heliotrope rash, V-sign, and shawl sign(1). As diagnostic criteria involve the characteristic skin manifestation of patients, an awareness of distinctive skin rash enables to make prompt diagnosis and timely management. Besides well- known skin manifestations as described above, panniculitis in patients with JDM has been also reported. Panniculitis is a disease group of subcutaneous adipose tissue inflammation. The concurrent occurrence of JDM and panniculitis is infrequently described; however, several supporting evidences including their vasculitic features and pathologic findings of panniculitis in JDM suggest their pathogenetic relationship. In this study, we describe a case of JDM with simultaneous panniculitis appearing both during JDM diagnosis and disease flare-up in light of the literature. Our aim was to raise the attention of clinicians on panniculitis as a cutaneous manifestation of JDM, and thereby lead them to keep in mind this rare disease for accurate treatment.

A 10-year-old female patient presented with a two- week history of violaceous eruptions with swelling on the palm and heel (Figure 1a and b). The lesion was exceedingly painful; hence, she could not walk without assistance and had functional limitation on daily practice, such as grasping a pencil. She had no significant personal or family history. The patient also had mild reddish and scaly rashes on her elbows, which were not painful, and she could not recall when they appeared. She underwent a cutaneous biopsy on the heel, and laboratory assessments and imaging tests were performed. The patient was initially treated with antibiotics because we could not exclude an infectious origin, such as cellulitis. A written informed consent was obtained from the patient. 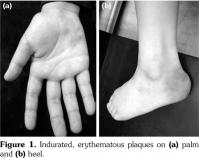 Figure 1. Indurated, erythematous plaques on (a) palm and (b) heel.
× 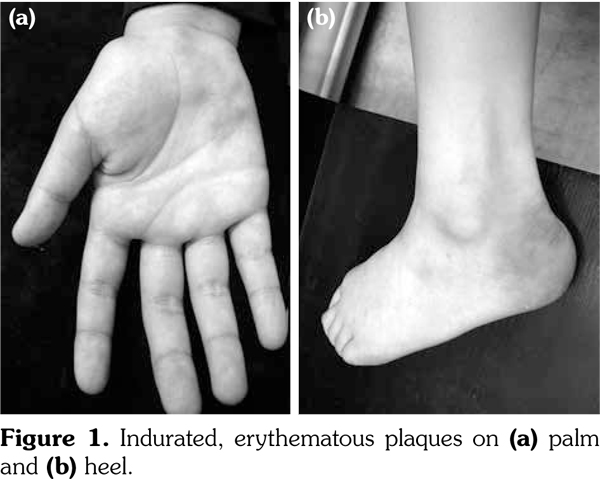 In a subsequent visit after one week, no symptomatic improvement was noted, and she complained of lower extremity weakness. The skin biopsy results revealed lobular panniculitis consisting of mixed neutrophilic and lymphocytic infiltration. Calcification or vasculitis was absent (Figure 2). The magnetic resonance images (MRI) revealed diffuse hyper-intense signal of the multiple muscles in the upper arm and thigh (Figure 3a and b). Laboratory tests yielded insignificant findings, except for aldolase (17.8 IU/mL; physiological range <7.6 IU/mL) and lactate dehydrogenase (799 IU/L; physiological range, 218-472 IU/L). Autoantibodies for antinuclear antibodies, including anti-Jo 1 antibody were not detected. A muscle biopsy specimen was obtained from a muscle in the thigh because JDM was suspected, and results were compatible with JDM. Based on the clinical and pathologic findings, JDM and JDM-associated panniculitis were diagnosed. 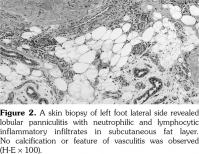 Figure 2. A skin biopsy of left foot lateral side revealed lobular panniculitis with neutrophilic and lymphocytic inflammatory infiltrates in subcutaneous fat layer. No calcification or feature of vasculitis was observed (H-E ¥ 100).
× 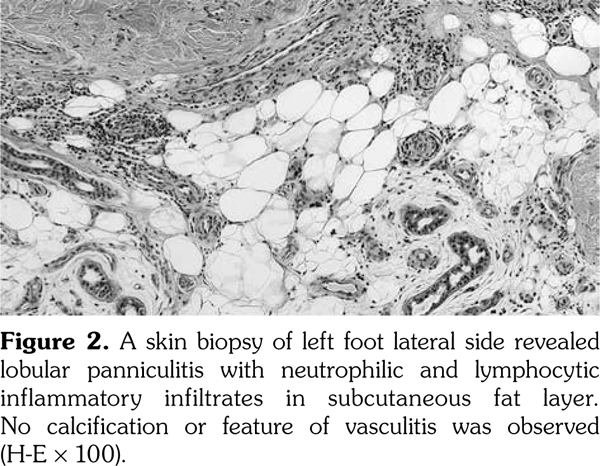 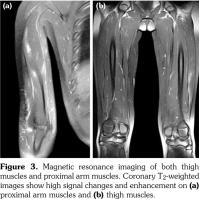 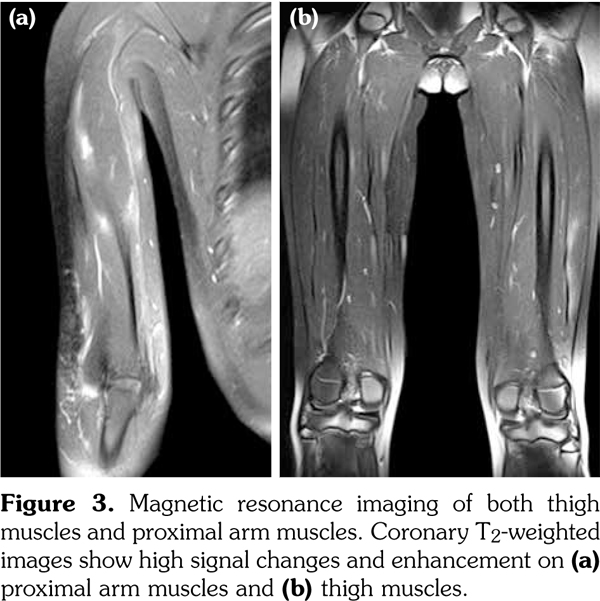 Treatment was initiated with intravenous methylprednisolone (2 mg/kg) and azathioprine (75 mg/day). Clinical improvement was noted within three weeks, with normalization of muscle power and resolution of pain and swelling of the heel and palm. She remained in tolerable state until steroid dose was tapered to 5 mg twice daily with azathioprine by six months.

However, she was readmitted owing to the same manifestations occurring after the medication was stopped for a few days. Erythematous nodules appeared on her palm and sole, and she also complained of lower extremity weakness, similar to that when she was diagnosed. Increased muscular signal changes were found in the upper and lower extremity MRI, and elevated muscle enzymes indicated JDM flare-up. The patient was administered with intravenous methylprednisolone (2 mg/kg) for three boluses and oral prednisolone (40 mg daily) with azathioprine. Skin lesions and muscle weakness resolved within one week. She was discharged with a well-tolerated state with 20 mg prednisolone daily and azathioprine at the same dosage.

Juvenile dermatomyositis is a rare autoimmune disorder with the incidence of approximately two to three cases per million children,(2) so it is challenging for clinicians to diagnose the disease without characteristic and distinguishing manifestations. In addition to subject symptoms such as muscle weakness, pathognomonic cutaneous symptom could be a critical clue for a suspicion of JDM. Panniculitis is also reported to be a cutaneous manifestation of JDM, although it is relatively uncommon. Reviewing the literature, we detected seven such cases and reported the first documented case of JDM-related panniculitis to our knowledge occurring both during disease onset and flare- up simultaneously.

Panniculitis is a group of heterogeneous inflammatory diseases that involves the subcutaneous adipose tissue.(3) It commonly presents with erythematous, indurated subcutaneous nodules accompanied by tenderness and heating sensation and can result in calcifications and lipo-atrophy.(4-6) Although it is infrequently reported, according to an analysis based on histologic examination with 55 patients with DM, panniculitis was detected at a prevalence of 10%.(7) This discrepancy between pathologic studies and clinical reports may lead to a speculation that panniculitis is unrecognized clinically or under-reported. Panniculitis in patients with JDM has been documented in seven cases (Table 1,(6,8-12)) and we excluded the cases complicated with infections. The predilection sites were the extremities and buttocks, but eruptions were also observed in the palm and heels, as in our case. The mean age of patients was 11.5 years, and three of the seven patients were male. The histopathologic findings were similar. Lobular panniculitis without calcification or vasculitis was mostly found, except one case containing calcification. The onset time of panniculitis was diverse from concurrently to five years after JDM diagnosis, which is approximately three years after the diagnosis on average. The mainstay of treatment was high-dose steroid, and responses to steroid were mostly remarkable within a few weeks. 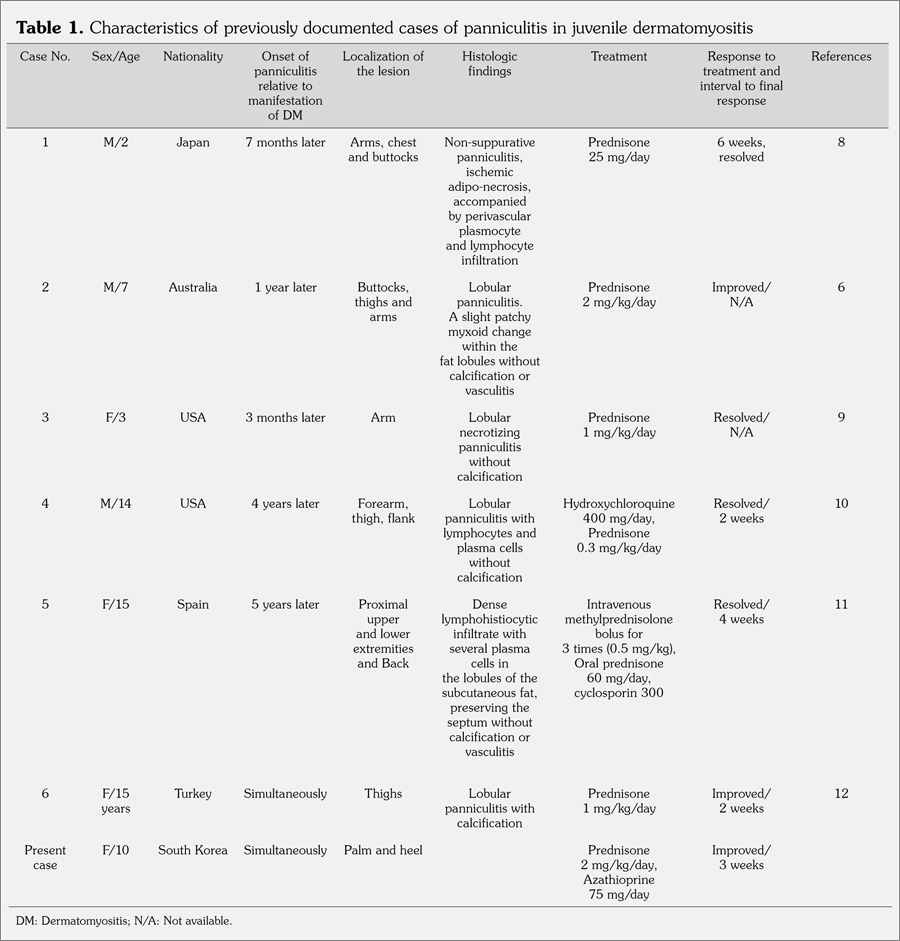 Although the relationship between panniculitis and JDM has not been elucidated, the clinical situations of concomitant occurrence of muscle weakness and panniculitis raise the possibility that these illnesses are associated pathogenetically. This is also supported by the histologic findings of segmental acute inflammation of arterioles or thickening of the vessel wall in the adipose tissue of patients with JDM.(13,16) There may be a time lag in manifestation of panniculitis as of the development of JDM. In general, since patients are vulnerable to infection because of immunosuppressive agent intake, infectious etiology should be excluded in the setting of panniculitis in a patient with JDM.

Owing to a limited number of case reports, treatment of JDM-associated panniculitis is not well-established yet. Considering the cases described, spontaneous regression was not reported, and immunosuppression is thought to be required. Mostly, therapeutic responses to systemic steroid have been excellent, typically 1 mg/kg/day or initially pulse therapy followed by tapered dose of steroid. In our case, both skin manifestation and muscle weakness showed improvement simultaneously after steroid administration. Immunosuppressive agents, including methotrexate, cyclosporine, azathioprine, and intravenous immunoglobulin, might be accompanied with steroid to wean the dosage of steroid and prevent relapses.(17)

In conclusion, although panniculitis in JDM is not apparent clinically and is rarely reported, the subclinical changes in the subcutaneous tissue of JDM frequently exist. It may present concurrently with the onset of JDM or a few months later. Therefore, if a patient with JDM manifests with erythematous, painful, indurated eruptions, JDM-associated panniculitis should be considered a possibility. The correlation between histologic findings and clinical course is required to be established in JDM-associated panniculitis, since timely diagnosis and treatment may reduce the pain and improve the quality of life of patients.