Objectives: This study aims to describe salivary beta-2 microglobulin (sB2M) levels in our setting and to assess the performance of sB2M for the diagnosis of Sjögren's syndrome (SS).
Patients and methods: This cross-sectional, comparative study included 192 SS patients (2 males, 190 females; mean age 53.1 years; range 23 to 84 years) and 64 healthy controls (1 male, 63 females; mean age 46.9 years; range 21 to 82 years). Patients were divided into three groups as those with primary SS, secondary SS, and sicca non-Sjögren's syndrome (snSS). sB2M was measured by enzyme-linked immunosorbent assay in whole unstimulated saliva (ng/mL). Differences in sB2M were evaluated using the Kruskal-Wallis test. Receiver operating curves were generated to determine the performance of sB2M for distinguishing between SS and non-autoimmune snSS groups, and between SS group and healthy controls.
Results: The primary SS and secondary SS groups had a significantly higher concentration of sB2M than the other two groups. There was no significant difference in the concentration of sB2M between primary SS and secondary SS groups, and neither between snSS group and healthy controls. The receiver operating curve analysis for distinguishing SS and snSS showed an area under the curve of 0.661 (95% confidence interval 0.590-0.728, p=0.0001) with an optimal cutoff value of 0.582 ng/mL. Sensitivity, specificity, positive predictive value, and negative predictive value were 68.7%, 59.3%, 20.2%, and 92.7%, respectively. The reported prevalence of SS in Mexico was considered when calculating the last two values.
Conclusion: In our setting, sB2M effectively distinguished between SS patients and non-autoimmune sicca symptoms. Including sB2M in our conventional diagnostic arsenal may assist in the evaluation of patients in whom SS is suspected; however, further studies are needed to clarify this hypothesis.

Elevated salivary beta-2 microglobulin (sB2M) has been already reported in both primary Sjögren’s syndrome (pSS) and secondary SS (sSS).(1,2) B2M is present on the plasmalemma of many cells, including infiltrating lymphocytes and salivary gland epithelial cells, and its increased levels in saliva may be related to salivary gland inflammatory activity in SS.(3) Sialochemistry has been proposed as a useful tool in SS.(2,4) Asashima et al.(5) recently reported cutoff levels of sB2M for differentiating SS patients from other patients in a Japanese sample. To the best of our knowledge, sB2M levels are currently unknown in our population. Therefore, in this study, we aimed to describe sB2M levels in our setting and to assess the performance of sB2M for the diagnosis of SS.

This cross-sectional, comparative study included 192 SS patients (2 males, 190 females; mean age 53.1 years; range 23 to 84 years) recruited from the outpatient clinic between July 2012 and July 2014 and 64 healthy controls (HC; 1 male, 63 females; mean age 46.9 years; range 21 to 82 years). Patients were divided into three groups as those with pSS, sSS, and sicca non-Sjögren's syndrome (snSS) (each group n=64). HC were recruited from among staff and patients’ companions who were non-relatives. Of the SS patients, those with history of human immunodeficiency virus, hepatitis B and C, head and neck radiation therapy, sarcoidosis, amyloidosis, immunoglobulin G4-related disease, chronic kidney disease, lymphoma, or multiple myeloma were excluded. All conditions mentioned in this study were diagnosed according to their corresponding criteria.(6-9) snSS was defined on clinical and laboratory grounds. None of these patients had a history of autoimmune disease. The study protocol was approved by the institutional review board. A written informed consent was obtained from all individuals. The study was conducted in accordance with the principles of the Declaration of Helsinki.

Beta-2 microglobulin was determined by an enzyme-linked immunosorbent assay (ab108885, Abcam, Cambridge, UK) and results were expressed as nanograms per milliliter (ng/mL). As noted in a previous report,(10) our protocol was similar to that formerly described by Castro et al.(4) Unstimulated whole saliva samples were collected at the fasting state, in the morning, by passive spitting into containers over 15 minutes. These samples were thus centrifuged at 14,000∞g for 20 minutes at +4°C prior to assaying.

The Kolmogorov-Smirnov test was used to evaluate whether the distribution of continuous variables was normal. Discrete variables were evaluated using exact r x c contingency table analysis or Chi-squared test. Continuous variables were evaluated using one-way analysis of variance or Kruskal-Wallis test. If the one- way analysis of variance was positive, then the Student-Newman-Keuls test was performed for pairwise comparison of groups. If the Kruskal-Wallis test was positive, then a test for pairwise comparison of groups was performed according to Conover.(11) Receiver operating characteristic (ROC) curves were generated to determine the performance of sB2M for distinguishing SS and snSS/HC. Sensitivity, specificity, positive predictive value (PPV), and negative predictive value (NPV) were thus estimated. The reported prevalence of SS in Mexico was considered when calculating the last two values.(12) Discrete variables are expressed as frequency counts and percentages. Continuous variables are expressed as mean ± standard deviation or median (P25, P75). Except for exact contingency table analysis, statistical analyses were performed using MedCalc for Windows, version 13.3 (MedCalc Software, Ostend, Belgium). Exact contingency table analysis was performed using Statistics to Use.(13) A p value of <0.05 was considered statistically significant. MedCalc was also used to generate the ROC curves. The boxplot was made using GraphPad Prism for Windows, version 5.01 (GraphPad Software, San Diego, USA). 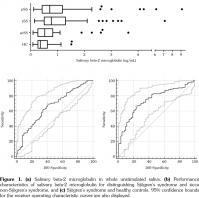 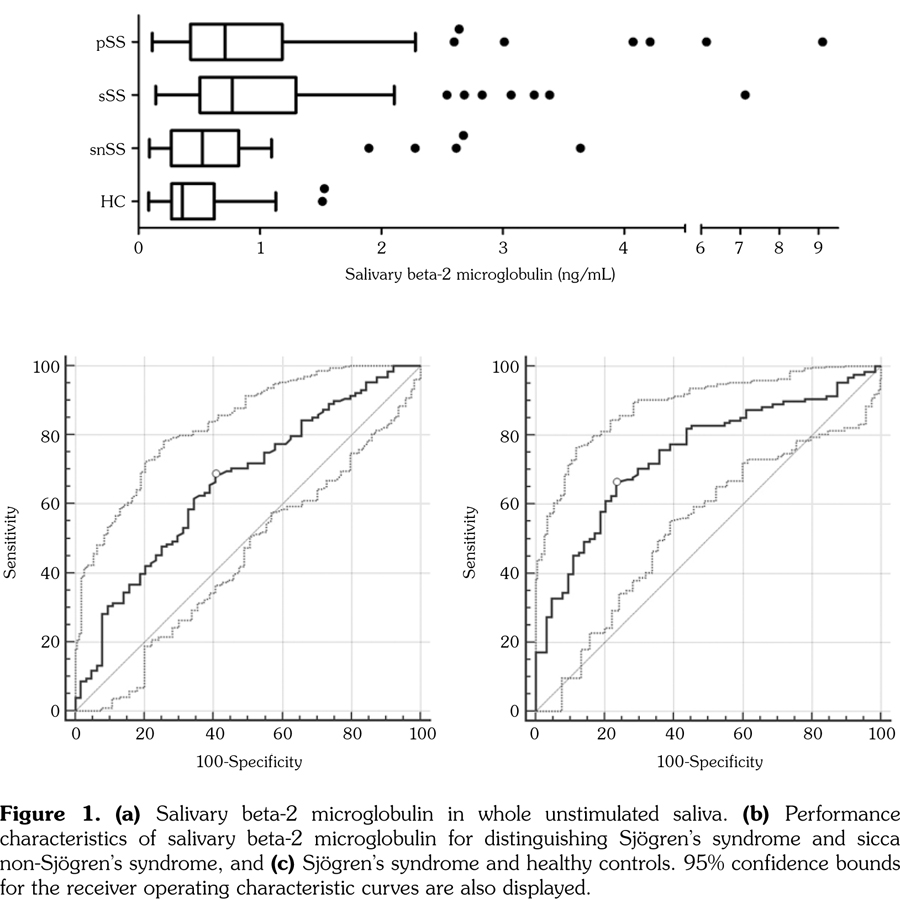 In this study, we found that B2M in whole unstimulated saliva can distinguish between SS and snSS, and also between SS and HC. In Mexico, a sB2M level below the cutoff can rule out this diagnosis (NPV >92%). PPV and NPV can be recalculated for different populations using some formulas based on Bayes' theorem (available in MedCalc). We also showed that sB2M can particularly distinguish pSS patients from those with sicca symptoms but no autoimmune disease.

Maddali Bongi et al.(14) studied three decades ago the diagnostic performance of sB2M in a small sample. In this study, the diagnosis of pSS was established based on the criteria proposed by Fox et al.,(15) which are no longer in use.(14) Asashima et al.(5) recently reported cutoff levels of sB2M for differentiating SS patients from other patients and HC in a Japanese sample. While on a first level our results were similar to theirs (i.e., sB2M was higher in pSS group compared to HC, and no difference between pSS and sSS groups), there were at least two relevant discrepancies between them: (i) the magnitude of sB2M levels, and (ii) the results of the ROC curve.

Addressing the second point, on ROC curve analysis, Asashima et al.(5) reported a sB2M cutoff level of 2.3 mg/L (2,300 ng/mL) to differentiate the SS group from the non-SS group. None of the individuals evaluated by us (including both patients and HC) reached this cutoff level. Due to the above, we did not recalculate PPV and NPV using their results.

Although our study was not underpowered, we did not find a statistically significant difference in sB2M between pSS and sSS groups. This is in contrast to the results from Baldini et al.(19) but similar to that reported by Asashima et al.(5) Unlike other investigators,(5,18) we only included patients with sicca symptoms, since the idea behind our study was to develop an additional tool to benefit in the diagnosis of those in whom SS is suspected (i.e., in those with sicca symptoms). In our study, fibromyalgia was more common in those with sicca symptoms but no autoimmune disease (snSS group). However, proteomic analysis of saliva has been already performed in patients with fibromyalgia and sB2M was not reported to be differentially expressed.(20) Therefore, this difference in the proportion of patients with fibromyalgia probably did not influence our results. Previous studies with sB2M have used parotid saliva.(2,3,21,22) Whole unstimulated saliva reflects the total contribution from all the salivary glands.(16) As Asashima et al.,(5) we also employed unstimulated whole saliva, because this collection method is rapid, simple, inexpensive, and non-invasive, and it is thus more likely to be used in real-life clinical settings.

Our study has some limitations. For example, there were some baseline differences between groups. HC were comparatively younger than the rest of the groups. However, sB2M was not correlated with age in a previous study.(22) The frequency of type 2 diabetes mellitus and arterial hypertension was also different between groups. However, as far as we know (and at least in PubMed/MEDLINE), there are no reports about the effect of diabetes mellitus (either type 1 or 2) or arterial hypertension on sB2M. Therefore, the possible influence of these two conditions on sB2M is currently unknown.

In conclusion, while sB2M may not be the ideal screening method for SS, it may be used as an adjunctive diagnostic test(22) and, in our setting, it can effectively distinguish between SS patients (either pSS or sSS) and those with sicca symptoms but no autoimmune disease. Including sB2M in our conventional diagnostic arsenal may assist in the evaluation of patients in whom SS is suspected; however, further studies are needed to clarify this hypothesis.