Rheumatoid arthritis (RA) is a chronic, progressive inflammatory disease that affects mesenchymal tissue throughout the body and is one of the connective tissue diseases.(1) The prevalence of RA in the general population is about 1% (females about three times more frequently than males). Prevalence increases with age; however, sex differences are reduced in older age groups. RA is becoming more prevalent in all races.(2,3) The disease usually begins during the fourth and fifth decade of life and approximately 80% of all RA patients develop this disease between 35 and 50 years of age. Family studies indicate a genetic predisposition. Compared with the general population, individuals who have relatives suffering from RA have an increased risk of developing the disease.(4) Genetic factors associated with RA can be divided into those associated with the major histocompatibility (MHC) complex and those originating from other parts of the genome.(6) The role of genetic factors in the etiology of RA established a connection between the discovery of the disease with class II MHC complexes, namely the genetic variant human leukocyte antigen (HLA)-DRB1*04. Previous studies described genetic variants that are negatively associated with the development of RA, such as HLA-DRB1*07, HLA-DRB1*08 and HLA-DRB*13, which are considered to play a protective role in preventing the occurrence of RA.(7) Patients often have circulating immunoglobulin M and immunoglobulin G reactive antibodies with a constant part of an immunoglobulin molecule. These antibodies, called rheumatoid factors, are used as a diagnostic indicator of RA. They are present in 60-90% of patients and in 5-10% of the healthy population. Collagen type II possesses one immunodominant T-lymphocyte epitope that binds to both variants of the predisposing HLA-DRB1* gene (HLA-DRB1*01 and HLA-DRB1*04). T-cells which recognize this epitope have a key role in the development of collagen-induced arthritis in transgenic mice expressing the HLA-DR1 and HLA-DR4 antigens.(8)

There are several hypotheses to explain the mechanics of this disease. The “shared epitope” hypothesis: allelic variation in the HLA-DRB1* gene reflects differences in the amino acid residues of HLA antigens’ β-chain. Each of the HLA-DR molecules associated with RA has the same or very similar amino acid sequence in the third hypervariable region of the β-chain. The variants of HLA-DRB1 genes associated with RA, including HLA-DRB1*04, HLA-DRB1*01, HLA-DRB1*10, HLA-DRB1*14 and HLA-DRB1*09, encode the same amino acid sequence at positions 67-74 in the β-chain of HLA-DR molecules, except for the change of one amino acid for another basic (arginine ∅ lysine) at position 71, encoded by HLA-DRB1*04. This same sequence of amino acid residues at positions 67-74 in the third hypervariable region of the β-chain, encoded by the mentioned variant of HLA-DRB1 gene, is called a “shared epitope”.(9) According to one existing interpretation of the "shared epitope“ hypotheses, specific peptides which bind to the peptide-binding groove of HLA alleles encoded with predisposing genes can lead to a loss of tolerance, leading to development of RA.(10) Disclosed are numerous possible causal agents including mycoplasma, Epstein-Barr virus, cytomegalovirus, rubella virus and parvovirus.(11) One possibility is the existence of persistent infection in the joint structures or retention of microbial products in synovial tissues. Alternatively, the immune response in connective joint components can be induced by microorganisms or a response to microorganisms which affect its integrity and detection of antigen peptides. In relation to this fact, previous researches determined reactivity to collagen type II and heat shock proteins.(12) There is a possibility that ‘molecular mimicry’ by infectious microorganisms leads to accumulation of cross-reactive determinants that are expressed in the joint structures of the host.(13) More recent studies are placing focus on the possible role of ‘superantigens’ originating from many microorganisms including staphylococci, streptococci and Mycoplasma arthritis.(14) Superantigens are proteins which have the ability to bind to HLA-DR molecules and specific Vβ segments of heterodimeric T-lymphocyte receptors and stimulate specific T-lymphocytes that express the Vβ product.(12) Other possible etiological mechanisms in RA include the breakdown of tolerance to the normal structure of one’s own body, causing reactivity to self-antigens in the joint, such as collagen type II, or loss of immunoregulatory control mechanisms that result in polyclonal activation of T-lymphocytes.(12) Loss of tolerance may occur due to changes in the HLA molecule. In the HLA- B27, the cysteine sulfhydryl group in position 67 may be oxidized in some tissues, which leads to structural changes in the peptide binding cleft.(15) In this study, we aimed to analyze HLA- A, HLA-B, HLA-C, HLA-DRB1*, HLA-DRB3*, HLA-DRB4*, HLA-DRB5*, HLA-DQB1 loci expression in patients with RA in the Federation of Bosnia and Herzegovina.

The study protocol was approved by the Institute for Transfusion Medicine FBiH (No.03/05-37-875/012 from 18.12.2012) Ethics Committee. A written informed consent was obtained from each participant. The study was conducted in accordance with the principles of the Declaration of Helsinki.

Table 1 presents the values of the frequency of allelic groups in MHC class I (HLA-A*, HLA-B*, HLA-C* loci) in RA patients. 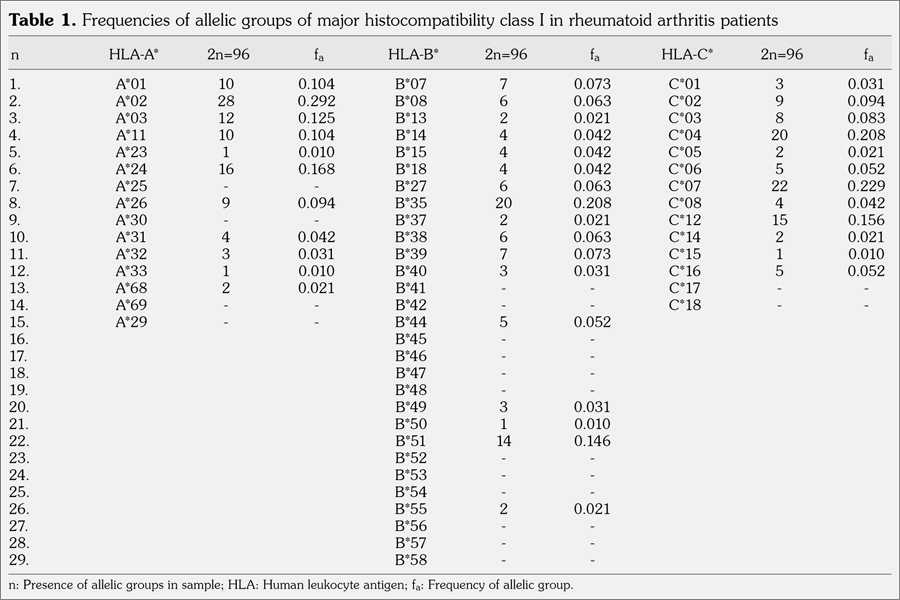 We analyzed the frequency of the variant gene loci (allele groups) of HLA-A*,B*,C* (MHC I class) as well as HLA-DRB1* DRB3*,4*,5* and DQB1* gene loci (MHC class II) in control group (Table 3). Each individual had a genotype consisting of two allelic groups so that the number of the considered allelic groups was 208 (104 genotypes). 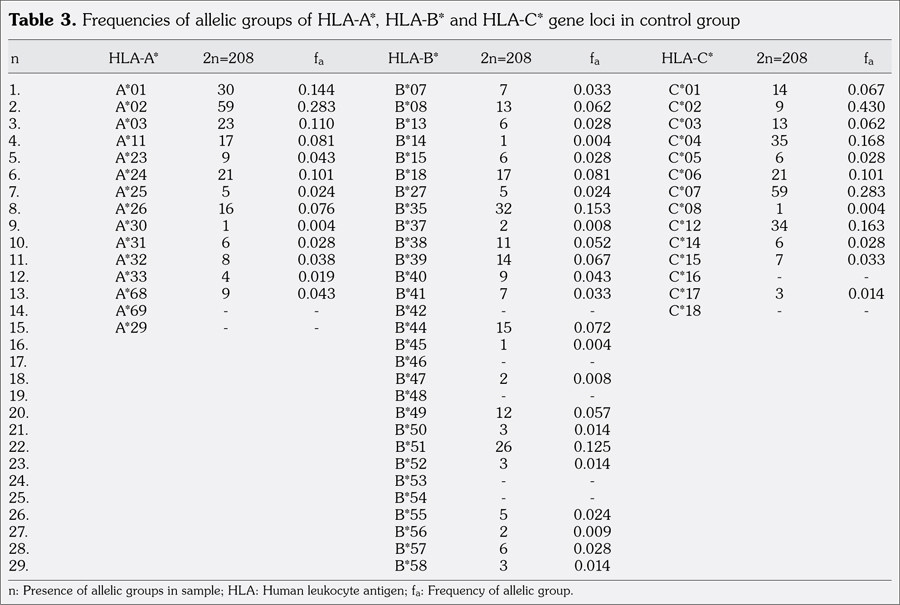 This variant of genotype can be considered a predisposing factor for the development of RA. Its increased frequency was the result of the presence of allelic group HLA-DRB1*01, in which higher frequency in RA patients was established (Table 6). The frequency of other genotypes in the HLA-DRB*1 and HLA-DRB*4 gene loci was not statistically significant.

Table 6. Comparative values of frequency for most common HLA-DRB1*01 and HLA-DRB1*04 gene loci between rheumatoid arthritis and control groups
× 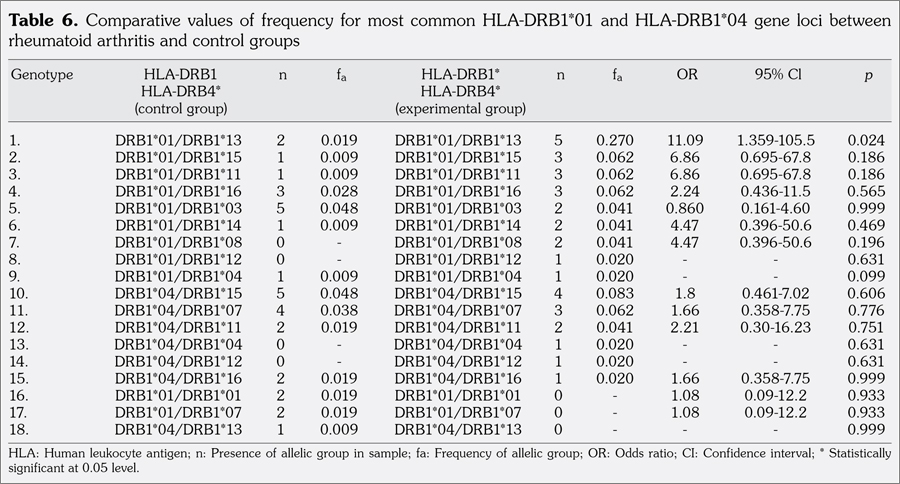 Recent research about crystallographic structure of the HLA-DRB1* gene further confirms that the specific epitopes are the main structural part of peptide binding clefts in the HLA-DR (A1, B1) heterodimer and that they play a crucial role in the formation of ‘rheumatoid pockets’.(1) This theory of connection between RA and DRB1 gene with a common epitope includes approximately 80% of populations in the northern Europe, while this connection occurs in only 43% of Greek patients.(3) The results obtained for HLA class II polymorphisms in RA patients in Federation of Bosnia and Herzegovina (FB&H) point to the role of allelic groups DRB1*01 (OR=2.795) and DRB1*04 (relative risk=2.573) in susceptibility to this disease. As these allelic groups are very frequent in the population, the value of the relative risk is small (relative risk=2). Thus, patients with RA at locus DRB1* showed a marked increase in the frequency of allelic groups DRB1*03 and DRB1*11 and a reduced frequency of DRB1*16, which is not typical for RA patients in FB&H. Statistical analysis confirmed the increase in DRB1*03 and DRB1*11 expression in patients with RA and did not confirm a reduction of DRB1*16. Many Caucasian populations demonstrate an association of alleles DRB1*01 and DRB1*04 with RA, or different roles of individual subtypes in the predisposition to RA. Similar results were found in RA patients in our population and the allele group HLA-DRB1*01 (Frequency [F]=0.229; p=0.004) was most frequent, followed by the allelic group HLA-DRB1*04 (F=0.167; p=0.023). The population of Spain had an approximately equal representation of HLA-DRB1*04 (51.1%) and HLA-DRB1*01 (44.7%). In the Spanish population,(11) in addition to a positive association between RA and the presence of HLA-DRB*01 (OR=3.5) and HLA-DRB1*04 (OR=4.0), there was also a positive association between RA and HLA-DRB1*10 (OR=4.4). In our patients, we have established the absence of the DRB1*10 allele group. In the population of Finland, the association between RA and presence of HLA-DRB1*04 was confirmed.(16) Similar results for DRB1*04 were found in studies conducted in Slovakia(17) and Hungary.(18) Research on the distribution of HLA-DRB1 locus conducted in Turkey(19) showed that HLA-DRB1*04 is present in high frequency (46.2%) in RA patients, in comparison to healthy subjects (20.9%); OR=3.24. Analysis of the population from the area of northern Italy(20) showed a weaker correlation between RA and HLA-DRB1*04 and an increased frequency of HLA-DRB1*01 in RA patients (24%), and in the control group, respectively (16%), accompanied by a relative risk of 1.5. Studies conducted in Japan confirmed a positive correlation between HLA-DRB1*04 and development of RA.(21) HLA-DRB1*13 was found to be significantly reduced in RA patients in comparison with the control group in many studies. In the group of RA patients from Turkey, HLA-DRB1*13 was present at a reduced frequency (15.4%), in comparison to the control group (37.3%); OR=0.31; p<0.001.(19) A strong protective effect of HLA-DRB1*13 in preventing RA was found in the population of Finland.(16) Stark et al.(17) established the protective effect of HLA-DRB1*07 and HLA-DRB1*13. HLA-DRB1*13 in the FB&H control group had the highest frequency (0.149) in RA patients (0.094) but showed no statistical significance (p=0.250), so this cannot be considered a protective effect. In the locus DQB1*, we found increased frequencies of DQB1*03 (0.343) and DQB1*05 (0.385) variants that were in disequilibrium with DRB1*01 and DRB1*04. Analysis of genotypes with respect to the presence of the allele group DRB1* showed that the most common genotype in our patients was DRB1*01/DRB1*13, which showed an increased frequency and a high relative risk (OR=11.09), and the DRB1*04/DRB1*15 genotype, the increase of which in comparison to the control group was not statistically significant, p=0.606. This genotype variant may be considered a predisposing factor for the development of RA. Increased frequency of this genotype resulted from a high frequency of HLA-DRB1*01 in RA patients. Frequencies of other genotypes in the HLA-DRB1* gene locus were not statistically significant (p>0.05). The limitation of our study is the small sample size.

In conclusion, this study suggests that in FB&H, RA is primarily associated with the locus HLA-DRB1* and allelic groups HLA-DRB1*01 and HLA-DRB1*04. Further studies with larger sample sizes are required to obtain a complete overview of the genetic background of this disease. This research should be considered as a pilot study in which we presented a small insight into the genetic structure of RA patients in the FB&H.