Complement C3 (C3) has important effects on damage of target organs and tissues in systemic lupus erythematosus (SLE). Physiologically, C3 is mainly produced by hepatocytes, but it can also be induced in different types of cells in pathological conditions (extra-hepatic synthesis).(1,2) Previous studies demonstrated that an increase in C3 gene expression from extra-hepatic synthesis can mediate local tissue injury in target organs, such as in the kidney, heart, lung and intestines.(3,4) It has been shown that extra-hepatic synthesis of C3 is tissue specific and can be regulated independently by inflammatory cytokines.(4,5) SLE patients with thrombocytopenia (TCP) display decreased levels of plasma C3,(6,7) which is associated with an increased risk of disease relapse.(8) However, the expression and regulation of extra-hepatic synthesis of C3 in whole blood cells in SLE patients with TCP remain elusive.

A previous study indicated an inverse correlation between toll-like receptor 9 (TLR9) expression by whole blood cells and plasma C3 concentration in active SLE.(9) Therapeutic TLR9 agonists are associated with an increased risk for development of TCP.(10) These observations linked increased TLR9 activity and decreased plasma C3 levels in SLE patients with TCP. Engagement of TLR9 can activate nuclear factor- kappa B signalling to induce transforming growth factor-beta 1 (TGF-β1) expression by murine macrophages.(11) Moreover, TGF-β1 can induce C3 expression in human monocytes.(12) Thus, we hypothesized that endogenous TLR9 agonists might activate TLR9 and induce C3 expression by up-regulating TGF-β1 expression in blood cells during the pathogenic process of TCP in patients with SLE. In this study, we aimed to assess the C3 expressions in whole blood cells and verify a pathway TLR9/TGF-β1/C3 for C3 regulation in mediating TCP in patients with SLE.

A total of 63 newly diagnosed SLE patients (2 males, 61 females; mean age 39.5 years; range 15 to 67 years) were enrolled from the Department of Rheumatology and Immunology of the First Hospital of Jilin University between October 2013 and April 2014. There were 38 SLE patients with TCP and 25 age- and sex- matched SLE patients without TCP. TCP was defined as a platelet count of less than 100∞10(9)/L in at least two occasions according to American College of Rheumatology criteria.(13,14) Inclusion for enrolment were as follows: (i) All patients met the American College of Rheumatology revised criteria for the classification of SLE in 1997;(13) (ii) with a duration of disease onset for less than three months; (iii) with no prior use of steroids or immunosuppressants before enrolling in the study. Exclusion criteria were as follows: (i) SLE patients with active infections or neoplastic disease at the time of the study; (ii) TCP patients with other potential causes including infection related TCP, drug-induced TCP, hematological disease (based on bone marrow biopsy) or liver cirrhosis.

The study protocol was approved by the Institutional Medical Ethics Review Board of the First Hospital of Jilin University. A written informed consent was obtained from each patient. The study was conducted in accordance with the principles of the Declaration of Helsinki.

Clinical and biological data of individual patients were collected, including age, sex, hematological changes, anti-double stranded deoxyribonucleic acid (anti-dsDNA) antibody titers, plasma C3 levels and Systemic Lupus Erythematosus Disease Activity Index (SLEDAI).(15) Anti-dsDNA antibodies were measured by the Crithidia luciliae indirect immunofluorescence test,(16) which is regarded as a reference method because of high specificity.(17) An anti-dsDNA antibody titer of ≥1:100 was considered as “high” and ≤1:32 as “low”.

The levels of TGF-β1 and C3 in the supernatants of cultured whole blood cells were determined by enzyme-linked immunosorbent assay using specific kits, according to the manufactures’ instructions (eBioscience for TGF-β1) and (CUSABIO for C3). Briefly, the samples were tested in duplicate and the concentrations of each cytokine were calculated, according to the standard curves established using recombinant molecules provided. 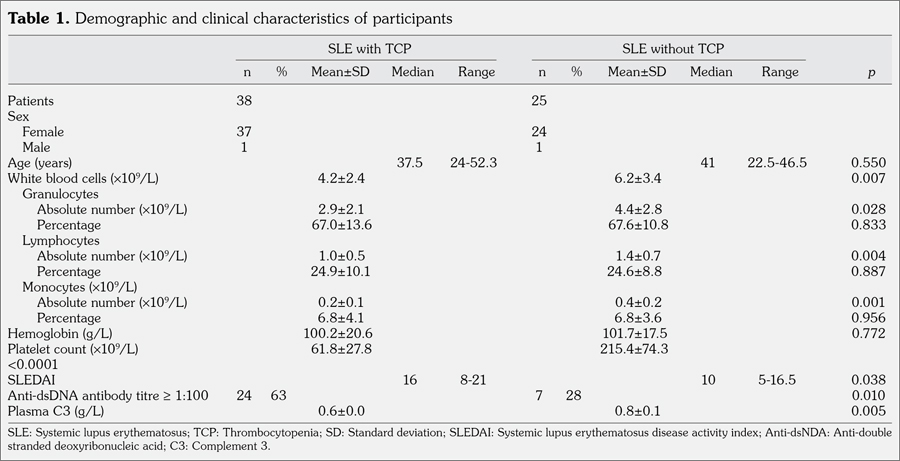 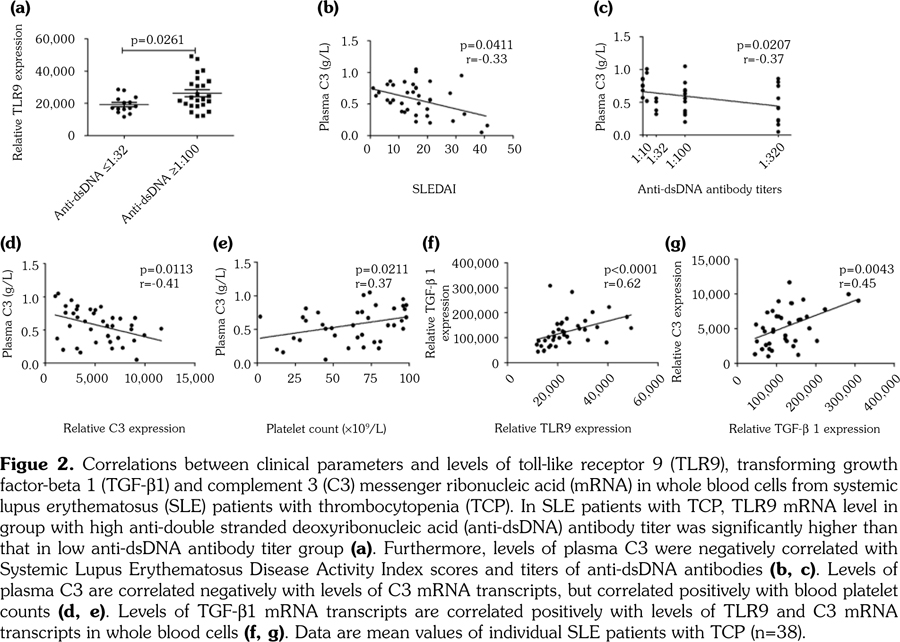 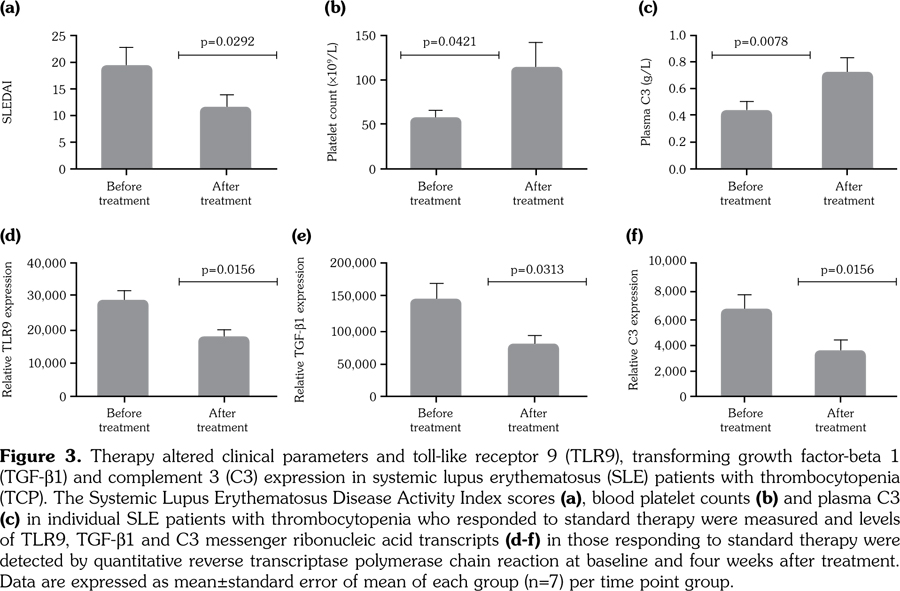 Figure 4. Toll-like receptor 9 (TLR9) activation stimulated complement 3 (C3) expression by inducing transforming growth factor-beta 1 (TGF-b1) production in whole blood cells in systemic lupus erythematosus (SLE) patients with thrombocytopenia (TCP). Whole blood cells from SLE patients with TCP were isolated and stimulated with or without 500 nM cytosine-phosphate-guanine, 2.5 ng/mL of TGF-b1 or 5 μM SB431542 for 24 hours, and some cells were treated with or without cytosine-phosphate-guanine alone or combined with SB431524 for 24 hours. Supernatants were harvested for measuring levels of C3 and TGF-b1 by enzyme-linked immunosorbent assay. Relative levels of C3 and TGF-b1 mRNA transcripts to glyceraldehyde-3-phosphate dehydrogenase in cultured blood cells were determined by quantitative reverse transcriptase polymerase chain reaction. Data are expressed as the mean ± standard error of mean of each group from three separate experiments (n=8, per group). Levels of C3 and TGF-b1 mRNA transcripts (a, c, e) and levels of C3 and TGF-b1 proteins (b, d, f) are shown.
× 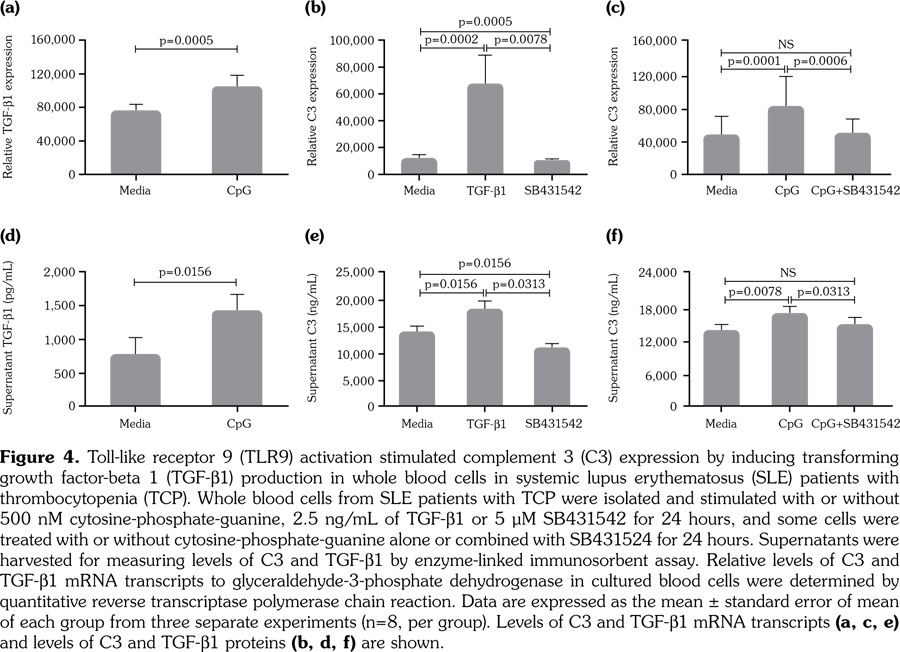 In the current study, we found that C3 gene expression was excessive in whole blood cells from lupus TCP patients indicating increase of extra- hepatic synthesis of C3. The increased C3 gene expression was associated with increased gene expression of TLR9 and TGF-β1. Furthermore, we demonstrated by in vitro experiments that TLR9 activation induced C3 expression was through up-regulating TGF-β1 expression. These results suggest that the TLR9/TGF-β1/C3 pathway may be in operation in the pathogenesis of SLE with TCP.

Hypocomplementemia is common in active SLE. A previous study on lupus has noticed that excessive consumption of plasma C3 leads to hypocomplementemia.(20) A study on antiphospholipid antibody syndrome suggests that hypocompelmentemia (typically low C3 and C4) is due to complement consumption rather than complement deficiency.(21) Moreover, excessive activation of complement mediates early platelet destruction in SLE.(22) In our study, there was discrepancy between serum C3 level and C3 transcription level in whole blood cell in SLE patients with TCP. This disparity suggests that an increase in C3 production may compensate the excessive consumption of C3 protein for immune attack of thrombocytes.

Systemic lupus erythematosus patients with TCP are treated with glucocorticoids and hydroxychloroquine, which can inhibit the binding of DNA to TLR9 and the nuclear factor-kappa B activation.(23-25) We found that SLE patients with TCP responding to the standard therapies displayed significantly decreased disease severity, reduced levels of TLR9 and TGF-β1 and C3 expression in blood cells, but increased levels of plasma C3 and platelet counts. These findings support the notion that glucocorticoid can inhibit endogenous DNA-activated TLR9 and nuclear factor-kappa B activation in SLE patients with TCP.(26) Thus, blocking TLR9 could down-regulate C3 gene expression in whole blood cells, which may lead to reduced complement mediated destruction of thrombocytes.

We demonstrated that whole blood cells are sites of extra-hepatic synthesis C3 in lupus TCP, and this synthesis can be regulated by the TLR9/ TGF-β1/C3 pathway. Extra-hepatic synthesis of C3 in mononuclear phagocytes has been noticed long ago, and this local synthesis of complement at inflammation site may be of importance in immunopathological conditions.(4,27) Furthermore, complements are implicated in participation in antibody mediated destruction of thrombocytes in periphery of patients with active lupus.(28-31) Based on these studies, we hypothesize that whole blood cells’ synthesis of C3 mediate local injury on platelets in SLE patients with TCP. However, we just observed the correlation but have not explored the causal relationship between the pathway and lupus TCP in current study. Further studies are needed on this issue.

We verified the TLR9/TGF-β1/C3 pathway on the basis of whole blood culture, because it mimics the complicated endogenous environment of human body and contains all the original elements which influence immune system.(32) Moreover, whole blood assay avoids possible impacts on blood cells during cell separation procedures. However, whole blood cell culture will not allow precise identification of effector cells in this C3 regulation pathway. Therefore, further studies are needed to delineate precisely which cell types in lupus TCP patients are responsible for activated TLR9 that leads to increased expression of TGF-β1 and C3.

There are limitations in the current study. The first is the relative smaller sample size in patients who have been chosen for mRNA detection after treatment. Further studies with a larger population are required to validate these findings. The second is the unclearness of casual relationship between the pathway and TCP. Further studies are needed to verify whether the activation of the TLR9/TGF-β1/C3 pathway in whole blood lead to TCP.

We thank the members of the hospital for their contributions to the immunological characterization of the patients. We thank all the patients and their family for their support and cooperation.