Disseminated Tuberculosis During the Course of Behçet's Disease: A Case Report

In this article, a 22 year-old male with disseminated tuberculosis during the course of Behçet's disease who was admitted with the complaints of fever, headache and fatigue was presented. The initial diagnosis was neuro- Behçet's syndrome. Tuberculosis during the course of rheumatic diseases are often associated with the use of TNF-alpha blockers. In our case, the patient experienced severe disseminated tuberculosis, despite being TNFalpha blocker-naive. To the best of our knowledge, this is the first case of tuberculosis with such a disseminated course developed in a patient with Behçet's disease who received conventional immunosuppressive treatment.

Behçet’s disease is a chronic inflammatory multisystemic vasculitis without a clearly established etiology and pathogenesis.[1] It is common in the Middle East and Asia, including Japan, and has also been seen in Turkey.[2,3] The incidences of severe bacterial infections have increased due to the increasingly widespread use of immunosuppressive agents in Behçet’s disease. Increases in tuberculosis infection due to the use of tumor necrosis factor-alpha (TNF-α) blockers have been especially noticeable.[4-6] In this report, we present a multi-systemic case of tuberculosis in a patient with Behçet’s disease who presented with complaints of fever, headache, and fatigue. He was initially considered to have neuro-Behçet’s disease. This case is unique because it had a multi-systemic course even though TNF-α blockers were not used.

A 22-year-old male patient was presented to the emergency room of our hospital with complaints of fever, headache, and fatigue which had been occurring for 10 days. The medical history revealed that he had been diagnosed as having Behçet’s disease in 2007 and had been using prednisolone since the time of diagnosis. The dosage of prednisolone was increased up to 64 mg/day by the supervising clinician. Cyclosporine-A had been added to the treatment at 100 mg/day two months previously due to eye involvement but was discontinued after one week due to side effects of fever, fatigue, and headache. The patient was prescribed azathioprine at 100 mg/day on the follow-up visit, and he had been using this drug for nearly 10 days prior to being admitted to our hospital. The physical examination findings revealed a body temperature of 39.8 °C, arterial blood pressure of 110/70 mmHg, and a heart rate of 112/per minute. Neck stiffness was minimally positive. He had swelling and sensitivity on palpation in the right scrotal region that had started three months earlier. Laboratory examinations were as follows: leukocyte count 7.400/mm3, erythrocyte sedimentation rate 87 mm/h, C-reactive protein: 13.4 mg/dl in cerebrospinal fluid (CSF) analysis, leukocyte count: 20/mm3, protein: 200 mg/dL, and glucose: 27 mg/dL (blood glucose: 94 mg/dL). There was no growth on the CSF culture. A chest X-ray was normal. Since the CSF findings and physical examination results could not rule out bacterial meningitis, he was started on ceftriaxone 2x2 gr intravenously. He had no regression of complaints in the first week of treatment, and his antibiotic treatment was discontinued. Internal disease and neurology consultations in conjunction with the clinical findings and CSF results led to a diagnosis of neuro-Behçet’s disease. Scrotal ultrasound screening was consistent with epididymitis. A large number of leukocytes were observed in the material aspirated from the testis (90% lymphocyte in nature). Ehrlich- Ziehl-Neelsen (EZN) staining detected acid-resistant bacteria. Treatment with isoniazid, ethambutol, pyrazinamide, and rifampicin was initiated under the diagnosis of testis tuberculosis. Subsequently, chest high resolution computed tomography (HRCT) and brain magnetic resonance imaging (MRI) were done. The chest HRCT result was consistent with miliary tuberculosis (Figure 1), and the brain MRI revealed findings were consistent with tuberculous granuloma and tuberculous meningitis (Figure 2). The vertebral MRI showed that widespread lytic lesions in the vertebra corpuses and the tissue swelling adjacent to the vertebra were consistent with Pott’s disease and spinal granuloma (Figure 3a and 3b). Based on these examinations, the patient was considered to have disseminated tuberculosis (testicular tuberculosis, miliary tuberculosis, tuberculosis meningitis, spinal granuloma, and Pott’s disease). The anti-tuberculous treatment was revised with the ethambutol being replaced by streptomycin. The patient’s body temperature returned to normal on the eighth day of treatment. The patient, whose general condition was observed to improve, is still receiving the treatment. 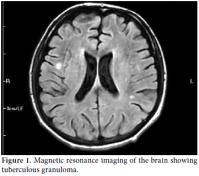 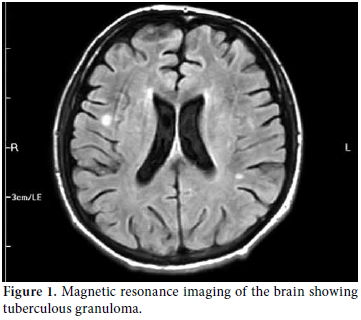 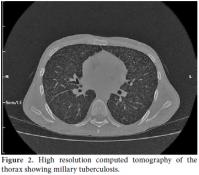 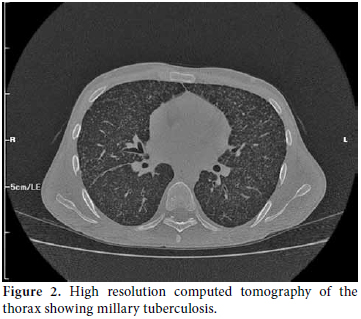 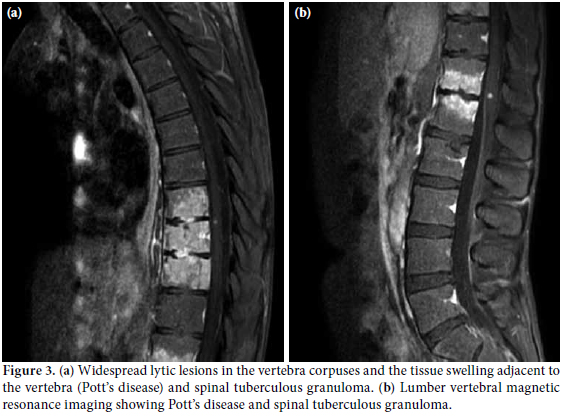 Recently, increases in the incidences of infectious diseases that have occurred in the course of autoimmune diseases and the infection-related morbidity and mortality associated with the use of potent immunosuppressive agents are more noticeable. Cases of pulmonary and extrapulmonary tuberculosis have been particularly observed in association with newly introduced TNF-α blockers. A majority of the tuberculosis cases occurring in the course of various autoimmune and rheumatologic diseases, including Behçet’s disease, have been associated with the use of TNF-α blockers.[4-6] Therefore, performing screenings for tuberculosis before these treatments and administering prophylaxis upon detection of latent tuberculosis is required.[4,7] Despite negative screening and isoniazid prophylaxis, tuberculosis cases have been reported.[5-7] In the present case, the patient experienced severe disseminated tuberculosis despite never using a TNF-α blocker. Only a few cases of tuberculosis have been reported in the literature that were diagnosed in a patient with Behçet’s disease who was undergoing conventional immunosuppressive therapy.[8,9] Therefore, the question of whether or not to perform tuberculosis screening or prophylaxis during treatment of the autoimmune diseases with systemic conventional immunosuppressive therapies has been raised. This question gains further importance in countries where tuberculosis is frequently observed, and an answer is needed. Some authors recommend routine screening and prophylaxis in psoriasis.[10] To the best of our knowledge, this is the first case of tuberculosis with such a disseminated course which has occurred in a patient with Behçet’s disease undergoing conventional immunosuppressive treatment.