Rheumatoid Arthritis: A Rare Cause of Cardiac Tamponade

Rheumatoid arthritis (RA) is a chronic multisystem disease of unknown cause which affects approximately 1% of the population. The typical characteristic of RA is persistent inflammatory synovitis which usually involves peripheral joints in a symmetric distribution. Systemic involvements of RA include pericarditis, pleuritis, vasculitis, entrapment neuropathy, interstitial lung disease and Sjogren and Felty syndromes. Echocardiographic and postmortem studies have shown that RA affects pericardium in nearly 50% of the patients. However, cardiac tamponade is a rare complication of RA. In this report, we present a surgically-treated 61-year-old female patient with cardiac tamponade secondary to loculated pericardial effusion.

Rheumatoid arthritis (RA) is a chronic multisystem disease of unknown cause which affects approximately 1 to 3% of the population. The characteristic feature of RA is persistent inflammatory synovitis, usually involving peripheral joints in a symmetric distribution. Systemic involvements of RA include pericarditis, pleuritis, vasculitis, entrapment neuropathy, interstitial lung disease, and Sjogren’s and Felty syndromes. As indicated by echocardiography and necropsy studies, RA affects the pericardium in approximately 50 percent of patients.[1] Chronic asymptomatic pericardial effusion is more common than acute pericarditis.[2] Cardiac tamponade is a rare complication of RA. In this report, we describe a surgically treated female patient with cardiac tamponade secondary to loculated pericardial effusion.

Our case involved a 61-year-old female patient who had been diagnosed with seropositive and erosive RA 20 years previously. She had no extraarticular involvement and was using oral methotrexate 15 mg once a week. The patient was admitted to another hospital having complained of progressive dyspnea, chest pain, and lower leg edema for more than 10 days. Pericardial effusion was detected by a thoracoabdominal computed tomography (CT) scan, and she was transferred to our hospital. At arrival, physical examination showed an arterial pressure of 110/70 mmHg, a pulse rate of 120 beats/min, a respiratory rate of 30/min, and a body temperature of 37 °C with distended neck veins, mild hepatomegaly, and decreased heart sounds. The patient did not have arthralgia, and there were no signs or symptoms related to active RA. Electrocardiography (ECG) revealed atrial fibrillation with high ventricular response and low voltage. A chest X-ray showed cardiomegaly with clear lungs. Laboratory investigations showed a C-reactive protein level of 129 mg/L, a sedimentation rate of 8 mm/h, a plasma D-dimer measurement of 998 ng/mL, a white blood cell (WBC) count of 11.500 cells/mm3, a platelet count of 428.000/mm3, and a moderate degree of anemia. A transthoracic echocardiogram (TTE) demonstrated a near total collapse of the right atrium and the right ventricle due to compression by an adjacent cystic structure covered with a thick membrane (Figure 1). When we examined the CT scan in light of these echocardiografic findings, we noticed that this large cystic structure had been misinterpreted as the right ventricle (Figure 2). On the CT scan, we found a bilateral pulmonary embolism but no masses or lymphadenopathy suggestive of malignancy. A color Doppler ultrasonography was performed which revealed the source of the embolism to be the presence of bilateral deep vein thrombosis at the lower extremity. Since the patient was symptomatic, surgery was planned. Surgical exploration via an anterolateral thoracotomy showed a viscous loculated material compressing the right ventricle and the right atrium anterolaterally along with a thickened pericardium. The surgeon also noted the fibrous thickening which caused septation and compartmentation of the pericardium and a 1500 cc hemorrhagic jelly-like fluid drainage. Analysis of the fluid revealed a pH of 7.15, a WBC count of 115/mm3 (predominantly lymphocytes), a protein level of 5.8 g/dl, an LDH level of 780 U/L, and a glucose level of 2 mg/dl. A pathologic examination of the pericardial material revealed prominent infiltration with lymphocytes and plasma cells, which correlates well with chronic inflammation. Bacterial cultures and a polymerase chain reaction (PCR) test for Mycobacterium tuberculosis were all negative with no malignant cells on cytological examination. Both the pathologic specimen and the pericardial fluid had no findings consistent with tuberculosis and malignancy. The Mantoux test was also negative. 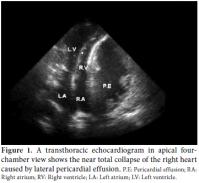 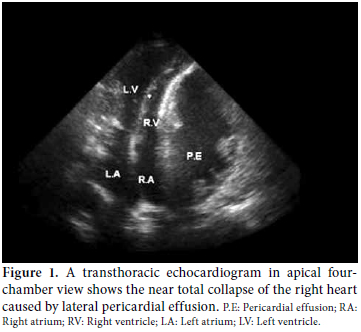 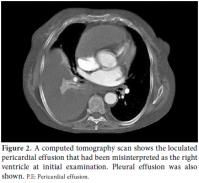 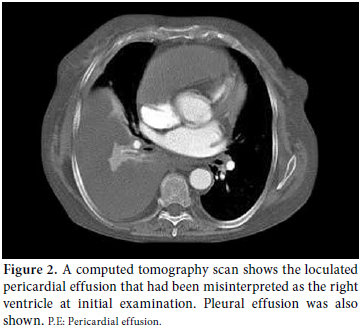 After the operation, a TTE demonstrated that the right chambers were free of compression. Warfarin was begun for the pulmonary embolism with a targeted international normalized rate (INR) of 2.0-3.0. The patient had an uneventful postoperative course and was discharged from the hospital on warfarin treatment with a good hemodynamic status. After three months, the patient was asymptomatic, and there was no pericardial effusion on control echocardiography.

The coexistence of the pulmonary embolism as a consequence of deep vein thrombosis is another interesting point of this case. Several studies have suggested that RA confers a prothrombotic state featuring abnormalities in coagulation and fibrinolytic systems together with an altered state of platelet reactivity. Endothelial dysfunction, hypercoagulability, prothrombotic conditions, inflammatory markers, immobility, and complications following major knee or hip replacement contribute to the increased risk of thromboembolism in patients with RA.[8] Our patient had a history of a period of immobilization due to disability which served as a predisposing factor for the pulmonary embolism.

In conclusion, RA-related, loculated pericardial effusion should be kept in mind as a rare cause of cardiac tamponade.