Complex regional pain syndrome (CRPS) is a syndrome characterized by a combination of pain, trophic changes, and vasomotor disturbances. Although the case reports in the literature describing the CRPS secondary to lumbar disc herniation (LDH) are abundant, in these case reports CRPS is diagnosed in only one extremity. Based on the most recent information available, this is the first case of CRPS associated with LDH that developed in bilateral lower extremities and could be successfully treated conservatively. A 49-year-old male patient was admitted to the clinic with complaints of pain and swelling of both feet and ankles, particularly on the left side. The patient had a history of an episode of low back pain radiating down the left leg that had developed two months previously after bending and lifting. Lumbar magnetic resonance imaging showed posterocentrally- and bilateral paramedially-located L5-S1 disc protrusion. One month after the onset of low back pain, painful stiffness and swelling developed in the joints of both ankles and feet, accompanied by edema, hyperhydrosis and allodynia in the dorsum of the left foot. He did not have any history of trauma. The medical history and laboratory investigations were normal. A diagnosis of CRPS in bilateral lower extremities was confirmed by direct foot-ankle radiographs and three-phase bone scintigraphy. A comprehensive conservative treatment program consisting of drug treatment (nonsteroidal anti-inflamatory drugs, gabapentin and calcitonin), physical therapy, and rehabilitation methods consisting of active-passive range of motion exercises to both ankles with gentle stretching, desensitization activities, gait training, application of a hot pack, ultrasound and transcutaneous electrical nerve stimulation to the lumbar region were applied. The patient's symptoms were relieved by these conservative treatments in six weeks. No recurrence occurred after a follow-up of 12 months. CRPS should be considered as a cause of persistently painful and swollen bilateral lower extremities in a patient with LDH. Early, accurate diagnosis should permit initiation of appropriate treatment and increase the success of the treatment.

Causalgia or complex regional pain syndrome (CRPS)- type II is a syndrome formed by a combination of pain, trophic changes and vasomotor disturbances. This syndrome is characterized by pain on active or passive movement, abnormal regulation of blood flow and sweating, and edema of skin and subcutaneous tissues.[1] It is self-limiting in some individuals which results in long-lasting impairment for some and disability in others.[2]

Although cases describing CRPS secondary to lumbar disc herniation (LDH) are abundant in the literature,[3-9] CRPS in these reports developed in association with LDH or after disc surgery in one extremity. To our knowledge, based on our review of the literature, we have not found any case of bilateral CRPS in the lower extremities associated with LDH and hereby present the first such case which was successfully treated conservatively.

A 49-year-old man complained of pain and swelling of the feet and ankles, particularly on the left side. Two months previously, he had experienced an episode of low back pain radiating down the left leg which developed after an episode of bending and lifting. At that time, he was diagnosed with LDH which was confirmed by magnetic resonance (MR) imaging. The lumbar spine MR images showed L5-S1 disc protrusion in the posterocentral region and in bilateral paramedian regions which was more apparent on the right side (Figure 1). His pain decreased after several days of bed rest and analgesic treatment. One month later low back pain, aching and stiffness developed in the joints of both ankles and feet and was accompanied by dorsal hyperalgesia and allodynia of the left foot. The aching was exacerbated by local pressure or attempted foot movement. Over the next month the symptoms steadily worsened to the point of an inability to bear any weight on the right foot. Mild swelling of the feet, edema, and hyperhydrosis of the left foot were also noted. Ankle motion was restricted near the end of range. There was a complaint of low back discomfort. Straight leg raising on the left side was only 45 degrees. There was a suggestion of mild plantar flexor weakness (4/5, 0 to 5 scale) on the left, but extreme pain on palpation of the left lower extremity prevented reliable motor strength and sensorial evaluation. The remainder of the neuromuscular examination was unremarkable. Rectal tone was intact, and pulses were normal. The patient had no history of trauma. Past medical history, family history and a review of systems were unremarkable revealing no indication of endocrine, rheumatologic or other systemic diseases. 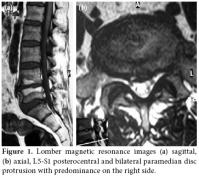 Figure 1. Lomber magnetic resonance images (a) sagittal, (b) axial, L5-S1 posterocentral and bilateral paramedian disc protrusion with predominance on the right side.
× 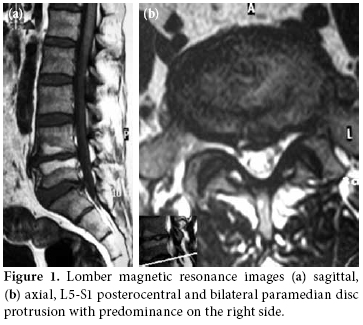 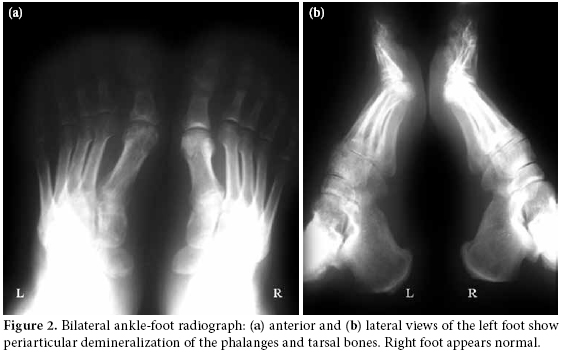 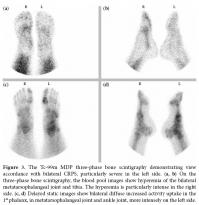 Figure 3. The Tc-99m MDP three-phase bone scintigraphy demonstrating view accordance with bilateral CRPS, particularly severe in the left side. (a, b) On the three-phase bone scintigraphy, the blood pool images show hyperemia of the bilateral metatarsophalangeal joint and tibia. The hyperemia is particularly intense in the right side. (c, d) Delayed static images show bilateral diffuse increased activity uptake in the 1st phalanx, in metatarsophalangeal joint and ankle joint, more intensely on the left side.
× 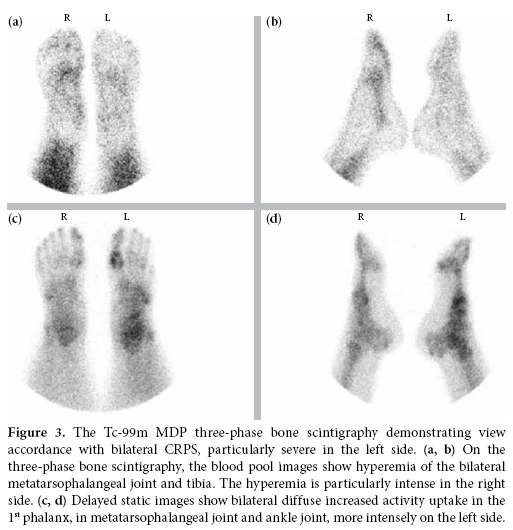 Comprehensive conservative therapy was commenced consisting of drug treatment (non steroidal anti-inflammatory drug [NSAID], gabapentin and calcitonin nasal spray), an outpatient rehabilitation program involving active and passive range of motion to both ankles with gentle stretching, desensitization activities (including contrast baths), gait training, and a physical therapy program involving hot packs, ultrasound and TENS to the lumbar region. Three weeks later, the back pain was totally relieved and lower extremity symptoms were mainly relieved in six weeks. There was no residual foot stiffness, swelling, edema or any atrophic changes. Electromyography six months after therapy showed a decrease in denervation. No recurrence occurred after a follow-up of 12 months.

Causalgia or complex regional pain syndrome is a painful syndrome affecting one or more extremities of the body and is marked by a wide variety of symptoms.[10] Jinkins et al.[11] proposed an anatomic basis for a link between CRPS and disc herniation. The complex neural interconnections between somatic and autonomic nervous systems account for the nonspecific pain and referred autonomic dysfunction that may be represented in the form of abnormal vasomotor, pilomotor and sudomotor activity occasionally associated with LDH.[9,11]

Causalgia or complex regional pain syndrome is usually described after a specific initiating event (in most cases trauma or an operation), but it is sporadically observed after a stroke, myocardial infarction and infection.[13] The CRPS-type II which develops after a nerve lesion is by definition a neuropathic pain syndrome.[1] Although the actual incidence of CRPStype II is unknown, it is estimated to occur in at least 1% to 5% of patients who have incurred a peripheral nerve injury.[2]

This entity is common in the limbs and is characterized by pain (spontaneous pain, hyperalgesia, allodynia), active and passive movement disorders, abnormal regulation of blood flow and sweating, edema of skin and subcutaneous tissues, and trophic changes of skin, organs of skin and subcutaneous tissues.[1] Upper extremity CRPS-type II is most frequently caused by injury to the brachial plexus or median nerve. Lower extremity CRPS-type II is typically caused by injury to the sciatic or tibial nerve.[2] In the literature, CRPS secondary to LDH is common and occurred in only one extremity.[3-9] Some of the reported cases are secondary to LDH,[3,4,7-9] and others are secondary to operated LDH.[3,5,6] Except for a single case of CRPS treated with sympathetic block,[8] all other reported CRPS cases regressed symptomatically after surgical treatment of herniation.[3,4,7,9] We report the only case of bilateral CRPS in the lower extremities due to LDH that was treated conservatively. One explanation for CRPS being bilateral in our case could be the presence of bilateral lumbar disc protrusion with right-sided predominance which clinically presented itself with pain radiating to the left leg. The other explanation could be immobilization of both legs during the bed rest period.

The characteristic appearance of the roentgenogram in CRPS is that of extensive mottled demineralization. The TPBS is valuable, particularly in mild or early cases of CRPS where roentgenograms of the extremities may be negative.[3] In our case, direct radiography showed the characteristic appearance only on the left foot, but the right foot appeared normal. In the early period when the right foot appeared normal on radiographs, the bilateral occurrence of CRPS was detected by the TPBS showing the mild or intense increased activity uptake in a dynamic, early blood pool, especially in delayed static images.[3,14] While symptoms of CRPS associated with LDH in the literature either begin or subside with a disc operation,[3-7,9] conservative measures relieved both the LDH and the CRPS in our case. The symptoms in our case resolved with medical therapy consisting of NSAIDs, calcitonin and gabapentin in addition to a rehabilitation program including exercise and physical therapy.

The treatment of CRPS-type II is most successful when performed early in the course of the syndrome, preferably within three months after onset. Early diagnosis is therefore crucial.[2] A delay in diagnosis and/or treatment for this syndrome can result in severe physical and psychological problems.[15] We propose that early diagnosis (aided by TPBS) of CRPS in our case (one month after the onset of symptoms) added to the success of conservative treatment.

Causalgia or complex regional pain syndrome is a challenging pain syndrome which can be severe and functionally debilitating. It should be considered as a cause of bilateral, persistently painful and swollen extremities in a patient with LDH. Early, accurate diagnosis permits initiation of appropriate therapeutic interventions and enhances the potential for successful treatment.