An increased incidence of tuberculosis has been seen in recent years due to factors such as immunocompromising diseases and drug use. There has also been an increase in osteoarticular involvement. In this article, we report a 22-yearold male patient who was diagnosed with tuberculosis of the knee and acromioclavicular joints. Tuberculosis of this joint is very rare, and concomitancy with the knee has not been reported in the literature. The definitive diagnosis was performed by the histopathological examination of a synovial biopsy. The chest radiograph showed cavitation and the magnetic resonance imaging examination showed characteristic demonstrative findings. Antituberculosis drug treatment was started with a satisfactory response.

According to the World Health Organization (WHO) report in 2009, the total number of incident cases of tuberculosis (Tbc) has been increasing, although in absolute terms the number of cases per capita has been falling as a result of population growth. However, the rate of decline is slow at less than 1% per year.[1] In addition, the incidence of Tbc remains high in both developing and developed countries. This is largely due to the acquired immune deficiency syndrome (AIDS) epidemic and other immunosuppressive factors, immigration, homelessness and a decline in Tbc control programs.[2,3] The introduction of anti-tumor necrosis factor alpha (anti-TNF-α) drugs has rekindled interest in Tbc encountered in rheumatology.[4]

Skeletal Tbc occurs in 1%-3% of cases and represents a third form of extra pulmonary Tbc after ganglion and kidney involvement.[5] Although Tbc can involve any area of the musculoskeletal system, the majority of the Tbc arthritis cases (~85%) present with chronic monoarthritis involving large and medium weight-bearing joints with the hip and knee being the most common sites.[6] Acromioclavicular joint involvement is very rare in Tbc arthritis. When a patient affected with chronic arthritis presents with insidious evolution and risk factors, it is very important to consider a Tbc etiology.

The aim of this case presentation is to describe the uncommon concomitant knee and acromioclavicular joint involvement in Tbc, characteristic magnetic resonance imaging (MRI) findings that could be shown in osteoarticular involvement, and the diagnostic problems that may arise and lead to a delay in treatment.

During a systemic examination he had swelling but no pain in the right acromioclavicular joint. He had swelling, pain and movement limitation in the right knee. The knee swelling was semisolid and involved a superior tibiofibular articulation that had the characteristics of a mobile mass.

Consolidation and irregular cavitation in the upper zone of the left lung was detected in the chest radiograph (Figure 1); however, knee radiographs were considered normal. Magnetic resonance imaging of the right knee revealed inflammation in the knee, around the joint and in the superior tibiofibular articulation. The knee MRI also revealed centrally necrotic abscesses with peripheral enhancement of the rim after a gadolinium injection (Figure 2). An MRI of the right shoulder also showed increased inflammatory signal changes in the acromioclavicular joint and adjacent soft tissue with enhancement after gadolinium injection (Figure 3). The purified protein derivative (PPD) skin test for Tbc measured 22 mm. A synovial biopsy taken from the knee detected granulomatous inflammation with caseation necrosis. Antibiotic treatment with isoniazid, rifampicin, ethambutol and pyrazinamide were prescribed for two months followed by rifampicin and isoniazid for seven months. The patient showed significant improvement in the knee and shoulder within two months and close to complete improvement within six months. 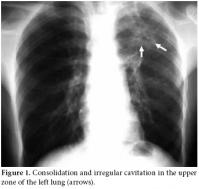 Figure 1. Consolidation and irregular cavitation in the upper zone of the left lung (arrows).
× 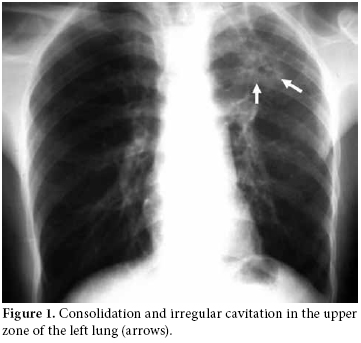 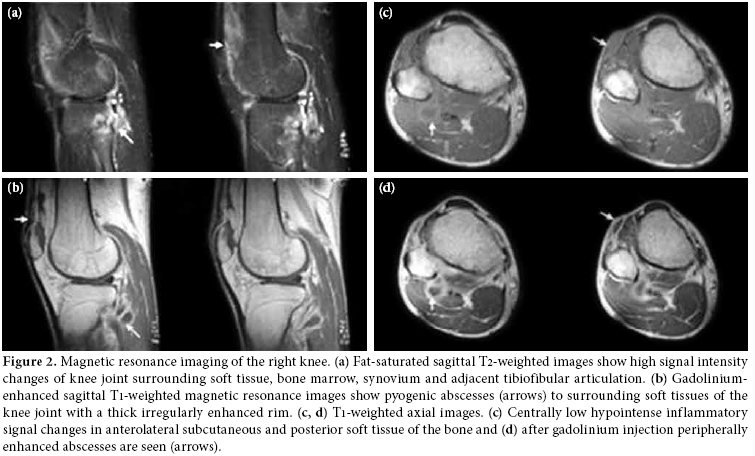 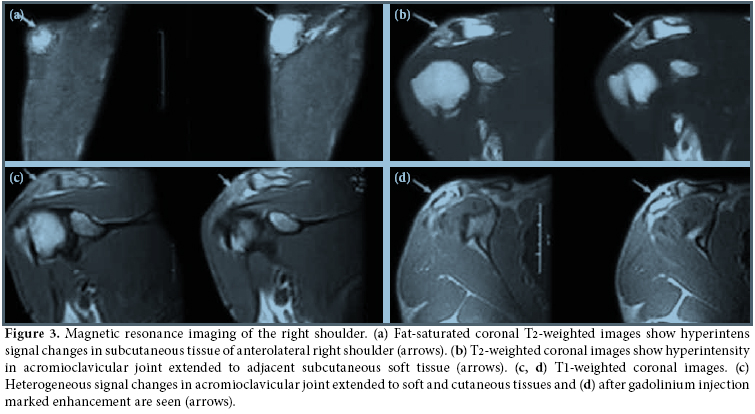 The diagnosis of bone and joint Tbc is a clinical challenge due to its insidious onset, slow progression, difficulty of laboratory diagnosis and the occasional absence of extra-articular features. Spinal Tbc is the most common form of osteoarticular Tbc followed by the hip and knee. In spite of rare cases of direct inoculation, osteoarticular Tbc is caused by haematogenous, lymphatic or direct local spread of tubercle bacilli from other lesions, from a quiescent pulmonary primary or other extraosseous foci.[11,12] In the present case, tubercle bacilli may have been spread by haematogenous or lymphatic means from one joint to the other as the involved joints were far from each other.

Tuberculous arthritis is characteristically monoarticular and rarely involves more than one joint.[13,14] Furthermore, acromioclavicular joint involvement is very infrequent in Tbc arthritis. In this case we report both unusual presentations of Tbc arthritis: a rare location and the simultaneous inflammation of two joints.

Tuberculous arthritis commonly presents with chronic pain accompanied by swelling and progressive loss of function. The onset is usually insidious, the diagnosis often delayed, and functional results may be poor after treatment, especially when there is extensive bone and articular destruction. Furthermore, a history of Tbc infection or exposure may not be present and no radiographic evidence of pulmonary involvement can be identified in approximately 50% of patients. A negative tuberculin skin test does not exclude diagnosis, as is the case with immunocompromised patients. Radiological findings are nonspecific in early stages. As the disease progresses, periarticular osteoporosis, peripherally located osseous erosions and gradual narrowing of the cartilage space are seen as typical radiographic findings.[7,11,15] In this case, we detected articular and soft tissue changes which continued until specific antituberculous treatment was administered.

Magnetic resonance imaging is the best modality to evaluate soft tissue affection by demonstrating marrow changes, joint effusion, synovitis, pannus, and cartilage and bone erosions.[2,16] Joint and periarticular involvement and lesions are particularly well defined by an MRI. The definitive diagnosis is performed from a positive mycobacterial culture and a histological examination of synovial fluid or synovial membranes. An examination of a biopsy specimen is an important and useful diagnostic method. Amplifying DNA of Mycobacterium tuberculosis from synovial fluid or bone by PCR could be useful for the early diagnosis of Tbc. We performed a definitive diagnosis through the histopathological examination of a synovial biopsy, a chest radiograph showing cavitation and the definitive demonstration on MRI examination. This was done in spite of the lack of positivity of mycobacterial culture and PCR. In addition, following the initiation of specific antituberculous treatment, the patient showed significant improvement in the knee and shoulder within two months with close to complete improvement within six months. We extended treatment to nine months in accordance with the recommendations for musculoskeletal tuberculosis in the literature and by the Turkey Ministry of Health.[17,18]

In conclusion, acromioclavicular joint involvement is very rare in Tbc arthritis. The simultaneous involvement of knee and acromioclavicular joints has not been reported in the literature. Mycobacterium tuberculosis was not detected from sputum, throat or synovial specimens. A definitive diagnosis was secured by histological examination of a synovial biopsy. The MRI showed characteristic joint and soft tissue affection. Osteoarticular Tbc should be considered in patients who present with unexplained joint soft tissue swelling and pain, particularly if they are immunocompromised or live in an endemic area.