Materials and Methods: A cross-sectional study was conducted to determine lumbar position sense and trunk muscle strength in 19 males with low back pain and in 20 healthy controls. After neurological examination every subject was evaluated for repositioning error (RE) with Cybex Norm isokinetic dynamometer using the trunk extension-flexion modular component. Then, every subject underwent a concentric/concentric exercise program including extension and flexion exercises performed actively for 15 times with the velocity of 60° / second. Finally, the RE test was repeated.

Proprioception is one of the most important mainstays of musculoskeletal rehabilitation and is a term used to describe the complex relations between afferent and efferent pathways that are regulated by mechanoreceptors in the joints [1]. Position sense or repositioning error are the most widely used methods to measure proprioception.

In patients with chronic low back pain (CLBP), some structural and functional changes occur in articular and periarticular structures. Hence, it has been shown that proprioception is also affected in patients with CLBP [2]. Patients with CLBP frequently demonstrate difficulty adopting and maintaining a neutral or midrange position of the lumbar spine [3]. Proprioceptive deficit may lead to delayed neuromuscular protective reflexes and coordination such that muscle contraction occurs too late to protect the joint from excessive joint movement [2]. Moreover, under stress conditions such as mechanical loading or fatigue, the ability to sense a change in lumbar position may be highly affected [4].

Newcomer et al. [5], found that lumbar flexor proprioception is impaired much more than extensor proprioception in patients with CLBP. They postulated that this might be because of the contribution of a wide range of muscles including abdominal, psoas, posterior hip group, and erector spinae and the larger excursion during lumbar flexion which challenges muscles more. In a recent study, the same author reported that rectus abdominis muscle activation pattern was changed in some positions on a force plate in patients with CLBP [6]. The results of these studies pointed out that the deterioration in flexor muscle group of lumbar region is more prominent in patients with CLBP.

Although a decrease in strength of trunk muscles can be expected in chronic low back pain, there is still a lack of objective studies investigating the relationship between the changes in strength of trunk muscles and the changes in proprioception. The aim of this study was to evaluate the relationship between lumbar position sense and trunk muscle strength, to investigate the effect of fatigue on this relationship and the effect of fatigue on proprioception in patients with CLBP.

For the patient group, individuals were consecutively selected from a population of young recruits with non radicular low back pain lasting more than 3 months and not radiating below knee level. Healthy subjects who applied for periodic health examination to our outpatient clinic with no complaints were included in control group. They did not have a history low back pain for at least one year. The intensity of low back pain was assessed by 100-mm Visual Analog Scale (VAS) before testing. All volunteers had lumbar flexion of at least 90° from standing erect position without severe low back pain.

After neurological examination every subject was evaluated isokinetically for repositioning error and lumbar paraspinal muscle strength with Cybex Norm isokinetic dynamometer (Lumex, Ronkonkoma, NY) using the trunk extension-flexion modular component. This apparatus which has been used in some studies does not deal with the effect of gravitational forces [7,8]. Subjects with eyes and ears covered were placed in this device and their lower limbs were stabilized by tibial and thigh pads. A belt secured the pelvis to limit the use of hip flexors. A shoulder harness and backrest provided anchorage to the moving upper section of the apparatus.

Before testing, subjects performed standardized warm-up trials consisted of 6 minutes on an ergometric bicycle followed by a thorough explanation of the test procedure. Isokinetic dynamometer moved the trunk of the participants through flexion with an angular velocity of 1° / second holding a switch in their right hand, it was stopped at 60° degree and they were told to keep this position in their mind. After that, they were brought back to the neutral position. When the device moved again, they were instructed to press the switch with the right thumb finger as soon as they sensed the right position.

The degree of deviation from 60° flexed position was calculated as repositioning error (RE). This test was performed two times for each subject. We used the mean values of two measurements to exclude the influence of learning factor that could affect test performance (1 st RE Measurement). Then, every subject was joined to the concentric/concentric exercise program including extension and flexion exercises in full range of motion performed actively for 15 times with the velocity of 60° / second. Immediately after the exercise program, the repositioning error test was repeated (2nd RE Measurement). RE measurements and exercise program were performed consecutively using the same dynamometer without any resting. The isokinetic parameters used for evaluation of muscle strength were total work in joules and peak torque in Newton-meter unit.

There were 19 males in the patient group and 20 males in the control group. All subjects were active persons who were involved in sports activities with irregular intervals. Comparisons between two groups are presented at Table 1. Differences in repositioning error before and after concentric exercise procedure between the groups were statistically significant (p<0.05) (Table 1). After fatigue, changes in repositioning error were found significant in both groups (p<0.05) (Figure 1).

Table 1. Comparison of demographic characteristics and clinical parameters between study and control groups
× 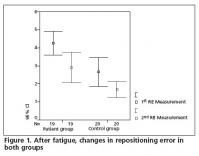 Figure 1. After fatigue, changes in repositioning error in both groups
× 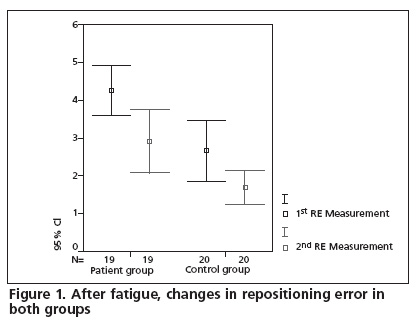 It has been widely reported that patients with low back pain develop a deconditioning syndrome that particularly influences the strength and function of the trunk muscles, with such patients being much weaker than healthy controls [8,11].

Several studies demonstrated that extensor strength is affected more than flexor strength in CLBP [12,13]. Shirado et al. [14], reported that patients with CLBP had greater flexor/extensor ratios than the healthy subjects. However, there are some studies in the literature which supports the notion that involvement of extensor muscles is not more prominent in CLBP. Hultman et al. [15], studied 3 groups of middle-aged men; nonimpaired low back, intermittent LBP and CLBP. In all groups, the ratio of trunk extensor endurance to trunk flexor endurance approximated 3: 1. Similarly, we did not find a significant difference in lumbar extensor muscle strength between the patient and control groups after fatigue in this study. However, the strength of flexor muscles in the patient group was significantly lower than that of the control group. We think that adaptation to disease process in lumbar extensor muscles is better than that of lumbar flexor muscles. A possible explanation for this may be the contribution of wider range of muscles during flexion as it was postulated by Newcomer et al. [5].

In our study, the higher flexor RE of the lumbar region in patients with CLBP compared to the healthy controls is consistent with the results of other authors [5,16,17]. Although there are various factors affecting proprioception in CLBP, paraspinal muscles can be considered as a major factor [18,19]. Trunk muscle dysfunction may cause alterations in normal afferent input from the affected muscles. On the other hand, proprioceptive impairment may cause different activation patterns and creates new adaptive protective mechanisms. Either being a cause or a result of CLBP, it is an expected outcome.

Before fatigue, the patient group had significantly higher RE than the control group. After fatigue RE was improved in both groups. This improvement seems likely to be due to learning and adaptation to the procedure. On the other hand, our results have indicated that only flexor muscle strength is related with proprioception after fatigue in healthy subjects in contrary to the patient population. Flexion requires activation of abdominal, psoas, posterior hip group, and erector spinae muscles and also complex coordination of hip and pelvis [20]. Extension is the direction that activates the facet joint mechanoreceptors most http: //gateway.ut.ovid.com/gw1/-82 [21].

In patients with CLBP, a particular muscle activation (gluteal etc.) pattern is inhibited, thus creating abnormal movement of the pelvis and spine leading to further deterioration in CLBP [5]. Subsequently, to create an adaptive protective mechanism, an alteration of activation patterns of different muscle groups may be expected. Indeed, the literature showed us that lumbar paraspinal muscle activation patterns are different in patients with CLBP from those of the healthy controls [22]. To have an idea about this alteration in activity patterns, we have checked the peak torque angles in both groups. The peak torque angles at both flexion and extension were significantly different between groups.

In a recent meta-analysis, it was shown that most of the studies dealing with the effects of exercise in patients with CLBP consist of abdominal exercise programs [23]. However, it is not known how strengthening exercises affect the protective abilities of lumbar spine. Further studies are needed to determine if exercise programs not including specific proprioceptive exercises, affect the relationship between muscle strength and proprioception.