Objective: We aimed to investigate fatigue and its relationship with disease activity, radiological findings and quality of life in patients with rheumatoid arthritis (RA).

Materials and Methods: 41 patients who were diagnosed as RA according to criteria of ACR and 38 healthy controls were enrolled to this study. Patients were asked to record the severity of rest pain (Visual Analog Scale) and duration of morning stiffness. Fatigue was evaluated by the Multidimensional Assessment of Fatigue (MAF) test. Disease activity and quality of life were assessed respectively with DAS-28 and Short Form-36 (SF-36). Radiologic involvement was evaluated according to modified Larsen's grading system.

Conclusion: Fatigue symptom may be quite disabling for patients with rheumatoid arthritis. It is affected by disease activity and pain but not by disease duration and radiologic score. Therefore, it is concluded that fatigue is essentially related with disease activity rather than the chronic inflammatory process in RA. (Turk J Rheumatol 2010; 25: 63-7)

Rheumatoid arthritis (RA) is a systemic autoimmune disease affecting primarily the joints and causing pain, deformity, joint destruction and disability [1]. The impacts of RA include systemic features such as fatigue, weight loss and increased mortality [2].

Fatigue is a common and quite important symptom in patients with RA [3,6]. It's prevalence in RA has been found to be 80-93% [5,8]. Although it is so common, it is not investigated in the routine follow-up of RA patients [3,18]. Excessive fatigue may lead to a reduction in both the quality and quantity of work output [9]. No research has been found in the literature regarding the relationship of fatigue with quality of life and radiologic involvement in patients with rheumatoid arthritis.

The aim of this study was to determine the severity of fatigue in RA and its relationship with disease activity, quality of life, clinical, radiological and functional parameters.

Patients
Forty-one patients who were diagnosed as RA according to the criteria of American College of Rheumatology (ACR) [19] and 38 healthy subjects were included in this study. Patients with malignancy, fibromyalgia syndrome, other systemic inflammatory rheumatic diseases and psychiatric disorders were excluded.

The Multidimensional Assessment of Fatigue (MAF) scale contains 16 items and measures five dimensions of fatigue: namely, severity, distress, impact on activities of daily living and timing. Each 100 mm VAS was changed to a 10-point numerical rating scale. Scores ranged from 0 (no fatigue) to 50 (severe fatigue) [5].

Statistical Analysis
Statistical analyses were performed by using the software Statistical Package Sciences (SPSS) for Windows version 11.0. For the discrepancies among the groups, Mann-Whitney U test and student's t test were used. Spearman's correlation coefficient was used to assess relationship between fatigue and clinical parameters. Significance level was 0.05.

Table 1. Comparison of demographic and clinical parameters between groups
× 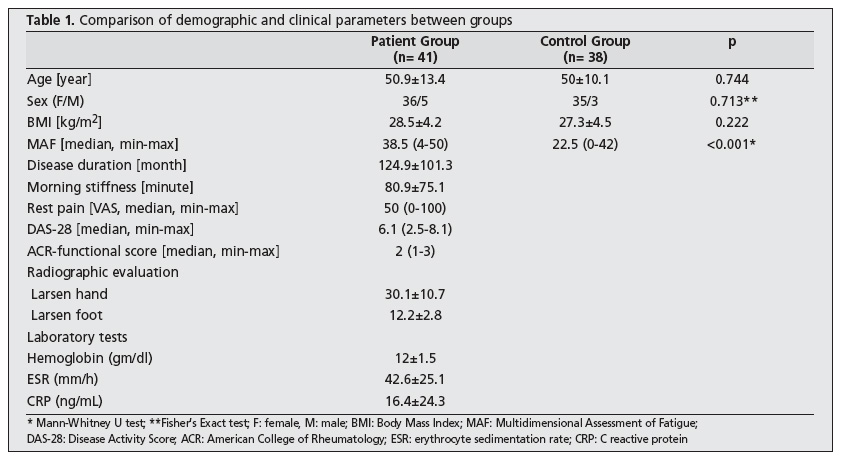 Table 2. Scores of the multidimensional assessment of fatigue subgroups in both groups
×

Table 3. Correlation between MAF and clinical parameters in patients with rheumatoid arthritis
× 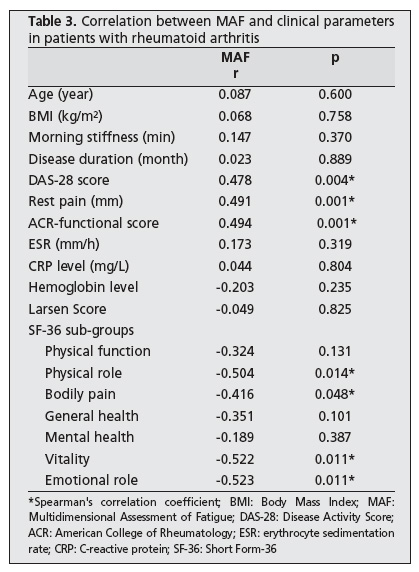 Fatigue, has been reported as an important symptom in RA and appears to be multifactorial and multidimensional [3,6]. Currently, MAF is used to determine various characteristics of the fatigue symptom in RA patients. Since MAF is short and easy to complete, it can be used in clinical practice for multiple purposes including assessment of baseline reports of fatigue.

In our study, the mean MAF total score was higher in patients with RA than in control subjects. Additionally, sub scores of the MAF were higher in RA patients. Similarly, Belza et al. [5] and Mancuso et al. [14] reported that fatigue scores were significantly higher in persons with RA compared to healthy controls.

We found that the total scores of MAF were significantly correlated with the DAS-28 scores which is in accordance with the results obtained by Pollard et al. [9]. In contrast to these studies, Huyser et al. [11] did not find a correlation between fatigue and disease activity. A former study however, emphasized that lack of fatigue was a feature of clinical remission in RA [7].

Pain is a major problem experienced by patients with RA and affects mobility and quality of life [24]. In concordance with the results of other studies, we demonstrated a significant correlation between fatigue and pain [5,9,10,12,14]. Pain is one of the most important symptoms that increase during the active phase of RA [25]. We can conclude that increased pain in patients with higher disease activity is accompanied by a more severe fatigue.

A relationship was shown between the MAF and ACR functional scale scores in our study. Several authors have investigated functional status and fatigue and found a significant correlation between them [4,7,10]. Studies investigating the relationship between fatigue and quality of life in RA have contradictory results [9,12]. Vitality and mental health which are subgroups of SF 36 have been found significantly correlated with fatigue [9]. Wolfe et al. [12], did not demonstrate a significant relationship between the MAF scores, vitality and physical function. However in our study, we found a correlation between MAF and four dimensions of SF36.

In our study, laboratory measurements like ESR, CRP and hemoglobin levels were found to be not related to fatigue. Riemsma et al. [13], found similar results for ESR and hemoglobin levels. Belza et al. [5], have reported that fatigue and CRP are not related. Both CRP and ESR are nonspecific markers of inflammation that correlate with disease activity [27], as well as being sensitive measures of change in response to treatment in clinical trials [28].

Morning stiffness is caused by edema of the synovium and periarticular tissues in inflammatory conditions. It is most pronounced after sleep, due to redistribution of interstitial fluid during sleep [29]. There were no correlation between MAF total scores and morning stiffness in our study. In accordance with this finding, Pollard et al. [9], reported no relationship between fatigue and morning stiffness.

In conclusion, fatigue as a major symptom in RA patients, needs to be measured properly with respect to its intensity by appropriate measures, such as MAF. The MAF provides more insight into specific dimensions of fatigue. Fatigue becomes more prominent as disease activity increases which seems to be independent of the disease duration. Quality of life is affected negatively by fatigue in patients with rheumatoid arthritis.