Objectives: This study aims to describe the effects of concomitant disorders on the course of familial Mediterranean fever (FMF) and the relevance of genotype on these associations.
Patients and methods: Files of 494 FMF patients (257 males, 237 females; mean age 12.8±1.94 years; range 1.6 to 23 years) were retrospectively examined. Age of diagnosis, sex, MEditerrenean FeVer mutations, colchicine dosage, disease severity score and concomitant diseases in FMF course were recorded. FMF diagnoses were based on Tel-Hashomer criteria and disease severity was determined by international severity scoring system for FMF. Patients were divided into two groups as M694V positives and M694V negatives. We compared the groups in terms of accompanying illnesses, MEditerrenean FeVer mutations, and disease severity scores among five concomitant diseases: juvenile idiopathic arthritis (JIA), asthma, Henoch- Schonlein purpura, periodic fever, aphthous stomatitis, pharyngitis and adenitis syndrome, and others.
Results: The mean age at diagnosis was 8.7±1.9 years. Eighty-five patients (17.2%) had accompanying diseases including JIA, asthma, periodic fever, aphthous stomatitis, pharyngitis and adenitis syndrome, and Henoch-Schonlein purpura. Mean disease severity scores were 2.4±1.1 in patients with only FMF and 3.0±1.5 in patients with concomitant disorders (p=0.001). Patients with concomitant JIA showed the highest severity scores (4.3±1.6). A statistically significant difference was found with one-way analysis of variance.
Conclusion: Our findings indicate that concomitant diseases, particularly JIA, influence FMF severity. Therefore, it may be beneficial to focus on diagnosis and treatment of comorbid inflammatory diseases, which may worsen the course of FMF.

Pyrin protein is thought to be a negative regulator on inflammatory pathways and mutant pyrin causes inflammasome activation, thus interleukin 1β production.(3,4) A Turkish nationwide cohort described the associations between Henoch-Schonlein purpura (HSP), polyarteritis nodosa, Behçet disease, chronic arthritis, systemic lupus eritematosus (SLE), enthesitis-related arthritis (ERA), uveitis and inflammatory bowel disease (IBD) with FMF.(5) In this study, we aimed to describe the effects of concomitant disorders on the course of FMF and the relevance of genotype on these associations.

A total of 494 children with FMF (257 males, 237 females; mean age 12.8±1.94 years; range 1.6 to 23 years) followed-up in pediatric rheumatology department were enrolled between August 2016 and April 2017. Diagnosis was based on Tel-Hashomer criteria and disease severity was determined by international severity scoring system for familial Mediterranean fever (ISSF), which has been validated in children recently. FMF severity scores were classified in three categories: mild (≤2), moderate (3-5) and severe (≥6).(6,7) Medical files of patients were retrospectively examined including age of diagnosis, onset age of symptoms, sex, MEFV mutations, colchicine dosage, disease severity scores, and concomitant diseases in FMF course. The study protocol was approved by the Çukurova University Faculty of Medicine Ethics Committee. A written informed consent was obtained from each patient. The study was conducted in accordance with the principles of the Declaration of Helsinki.

Patients were divided into two groups according to M694V mutations as M694V positives (group 1) and M694V negatives (group 2). Groups were compared in terms of accompanying illnesses. Additionally, disease severity scores were compared between patients with or without concomitant diseases.

Juvenile idiopathic arthritis (JIA) was diagnosed according to International League of Associations for Rheumatology criteria in children younger than 16 years, with at least six-week arthritis without any other causes.(8) Arthritis lasting longer than six weeks with radiological changes and which was unresponsive to colchicine and short courses of antiinflammatory drugs were evaluated as coincidental JIA. HSP was diagnosed by 2010 European League Against Rheumatism/ Paediatric Rheumatology INternational Trials Organisation/ Paediatric Rheumatology European Society criteria in patients with purpura particularly in lower extremities with one of the following criteria: abdominal pain, arthritis/arthralgia, immunoglobulin A deposits in biopsy or renal involvement.(9) Attacks of periodic fever, aphthous stomatitis, pharyngitis and adenitis (PFAPA) syndrome were distinguished from FMF attacks by presence of oral aphthous ulcers, pharyngitis or adenitis. Other concomitant diseases were diagnosed by their specialists.

Peripheral blood was collected with ethylenediaminetetraacetic acid-treated tubes from all patients and deoxyribonucleic acid was isolated from peripheral blood lymphocytes. The entire MEFV gene was sequenced by Sanger sequencing technique (3130XL, Applied Biosystems, Foster City, Califonia, USA). Moreover, PolyPhen-2 (Polymorphism Phenotyping v2), Sorting Intolerant from Tolerant and MutationTaster in-silico tools were used for the analyses of novel mutations. Family screening was performed due to the outcome of the silico analysis, in which the mutation was considered to be the probable cause of disease. 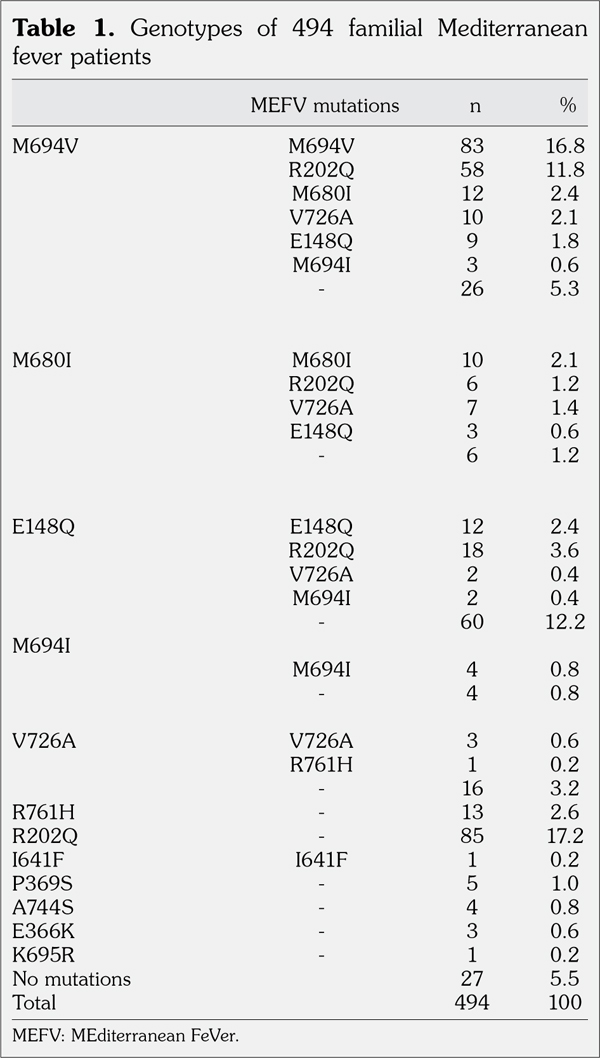 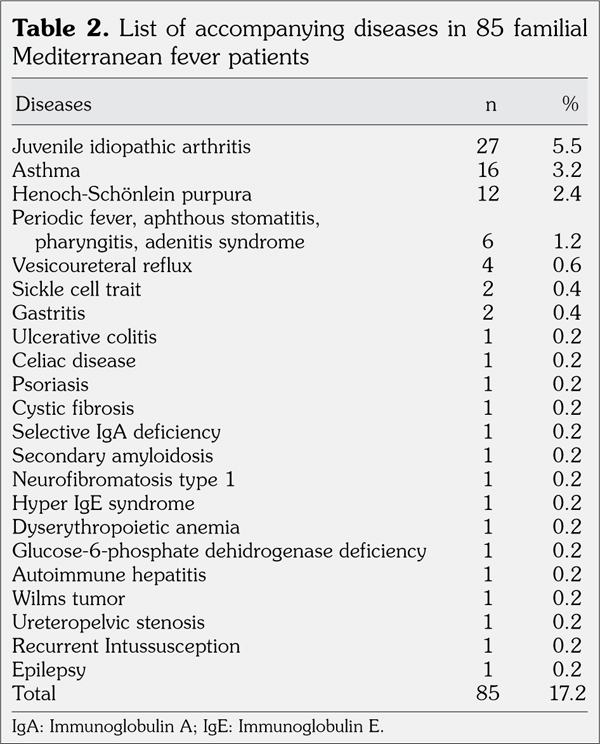 Familial Mediterranean fever is the first genetically described and most common periodic fever syndrome in the world.(4) FMF is very common in Turkey with a prevalence of 1/1000 and a carrier rate of 20%. Tunca et al.(5) worked on a large cohort of 2716 FMF patients and 13.5% of them had accompanying diseases (HSP in 2.7%, polyarteritis nodosa [PAN] in 0.9%, Behçet disease in 0.5%, JIA in 1.3%, seronegative spondyloarthropathy in 2.3%, acute poststreptococcal glomerulonephritis in 0.4%, uveitis in 0.2%, SLE in 0.1%, and IBD in 0.1%). In our study, coexistence rates with HSP and ulcerative colitis were 2.4% and 0.2%, respectively, and similar with the literature. However, we diagnosed JIA in 5.5% of patients, higher than mentioned in previous studies. This result may be due to the fact that seronegative spondyloarthropathy has been classified in JIA, ERA currently. Barut et al.(10) similarly found a higher presence of JIA in 8% of FMF patients in a recent single-center study.

In a recent study from Turkey, autoantibodies for celiac disease were investigated and if necessary, intestinal biopsy was performed in 303 children with FMF. None of the patients were diagnosed as celiac disease.(11) In the present study, only one patient (0.2%) had celiac disease; so, a clinical association cannot be suggested due to the low rate of this comorbidity.

Several studies showed associations between FMF and IBD; however, to our knowledge, relevance on FMF severity was not studied before.(12,13) In a study, coexistence of FMF with Chron disease (CD) was correlated with younger diagnosis age of IBD; however, intestinal involvement and complication rates were not affected by presence of FMF. On the other hand, FMF attack frequency and persistent proteinuria were higher in FMF patients with CD than only FMF patients; this may be due to additive inflammation of CD on FMF course.(14) We diagnosed ulcerative colitis in one (0.2%) of 85 patients, with homozygote M694V mutation. However, we did not study the effects of IBD on FMF course because of insufficient rate of comorbidity.

Vasculitis, particularly PAN and HSP have been frequently reported with FMF. Yalçinkaya et al.(15) previously showed that 38% of 29 patients with PAN carried at least one MEFV mutation and 13.7% of them were homozygote for MEFV. Nevertheless, PAN was not present among the accompanying diseases in our study.

MEditerrenean FeVer mutations were detected in approximately 13-34% of patients with HSP, with a homozygosity rate of 4-6% in previous studies.(16-19) However, associations between HSP and FMF severity were not discussed before. In our study, clinical worsening was not reported among patients with accompanying HSP and we have found a relatively high dose of colchicine requirement; however, this difference was statistically insignificant.

In a recent study, 12.8% of FMF patients were reported to have a concomitant disease (5% vasculitis, 3.5% JIA, 1.16% IBD, and 0.66% asthma). Researchers also found that M694V mutation had a susceptibility to associated diseases.(20) Asthma prevalence was higher (3.2%) in our cohort and we thought that this difference may be due to climate and environmental differences.

Concurrent disorders were found more frequently along with M694V mutations in FMF patients in another adult study. However, effects of concurrent disease and its subtypes on FMF course were not studied.(21)

Our previous study confirmed that M694V mutations associated with more severe course in FMF patients.(22) In the present study, M694V mutations had no relevance on presence or types of accompanying diseases. Therefore, we suggest that patients with concomitant disorders had a severe disease course unrelated with M694V mutations. Furthermore, diseases were classified into five groups, concomitant JIA group showed higher severity scores than asthma, PFAPA syndrome, HSP, and other diseases. We suggest that the influence of JIA on FMF severity may be due to chronic inflammation of JIA.

Our study has some limitations. Firstly, we cannot be sure if concomitant JIA exacerbates FMF course or highly active FMF causes JIA. We preferred the recent ISSF, not including arthritis as a criterion, which may lead to wrong assessment in patients with concomitant JIA. Another question was if chronic arthritis was a comorbid situation or a rare finding of FMF. The most common joint involvement in FMF is recurrent, self-limiting arthritis and persistence of FMF arthritis was reported in case reports and series previously. Protracted arthritis of FMF cannot be distinguished from other chronic arthritis by clinical, radiological, or histological interventions.(23-25) According to the self-remitting course of FMF, arthritis lasting longer than six weeks with radiological changes and which was unresponsive to colchicine and short courses of antiinflammatory drugs were evaluated as coincidental JIA in the present study.

In conclusion, although several studies have suggested that MEFV mutations variably predispose not only to FMF but also other diseases, MEFV mutations did not influence the concomitant diseases in our study. However, we have found that concomitant diseases, particularly JIA, influenced FMF severity. Therefore, it may be beneficial to focus on diagnosis and treatment of comorbid inflammatory diseases, which may worsen the course of FMF.