Scleroderma is a chronic inflammatory disease characterized by widespread fibrosis.(1) The excessive production of extracellular matrix (ECM) molecules and their accumulations lead to fibrosis, although the pathogenesis of scleroderma is not fully described.(2) Activated fibroblast, which is also known as myofibroblast, is the main source of ECM molecules.(3,4) Inflammatory cells lead to the activation of fibroblasts via producing several cytokines, adhesion molecules and growth factors, in addition to activated endothelial cells.

Transforming growth factor-beta (TGF-β) is the most famous actor at this process.(5) After scleroderma fibroblasts are activated, they can also produce several cytokines, chemokines and growth factors, in addition to ECM molecules. Therefore, scleroderma fibroblasts perform autocrine and paracrine duties and it is accepted that they have different morphologic properties.(1-5)

The expressions of Wnt-2, Wnt-10β and Wnt-11 have been demonstrated to be increased in experimental scleroderma models which are tight-skin-1 mice and bleomycin (BLM) induced skin fibrosis.(9,10) Moreover, it has been reported in patients with scleroderma that skin Wnt-1 and Wnt-11 expressions are increased and the expression of Dickkopf-related protein 1 (DKK1), an inhibitor of Wnt/β-catenin signaling pathway, is decreased.(11) β-catenin production has been shown to increase in skin and lung samples of scleroderma patients.(11,12) It has been reported that in vivo applications of Wnt-3 and Wnt-10β lead to dermal fibrosis.(10-13) A subsequent in vitro study has demonstrated that Wnt-3 activates myofibroblast.(14)

Sixty female BALB/c mice (8-week old and weighing 25 g to 30 g) were included in the study, which was conducted in Firat University, Faculty of Medicine, between January 2015 and June 2015. The mice were divided into six groups as prophylactic-early [control I (group 1)], sham I (group 2), paricalcitol I (group 3), therapeutic-late [control II (group 4)], sham II (group 5), and paricalcitol II (group 6) groups (Figure 1). The upper back skin was shaved for subcutaneous injections. The study was approved by the Animal Care and Ethics Committee of the Firat University, Elazig, Turkey. 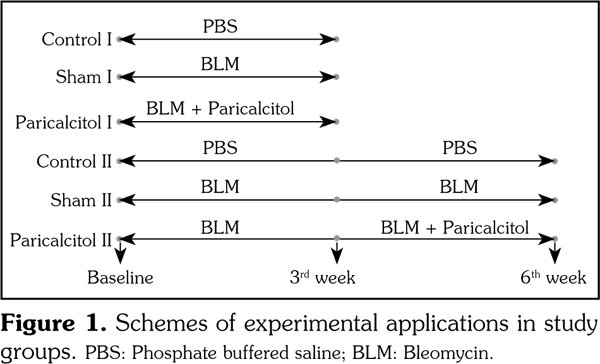 The paraffin embedded skin specimens were sectioned using a microtome. Subsequently, the skin specimens were stained with hematoxylin and eosin and Masson’s trichrome. Dermal thickness was measured from the dermal-fat junction to epidermal-dermal junction and was determined from randomly selected five sites of two or more skin sections for each animal, by 40∞, 100∞ and 200∞ magnifications. Histopathological examinations were performed under a light microscope (Olympus BX-50; Olympus America, Inc., Lake Success, NY, USA).

Statistical evaluations were performed using the IBM SPSS Statistics V22.0 (IBM Corp., Armonk, NY, USA) package program. The data were expressed as mean±standard deviation. Kruskal-Wallis one-way analysis of variance and post-hoc Mann-Whitney U test were applied for statistical comparisons. A p value of <0.05, after Bonferroni correction for multiple comparisons, was accepted to be significant. 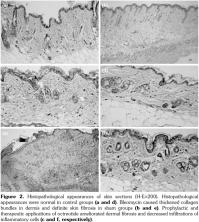 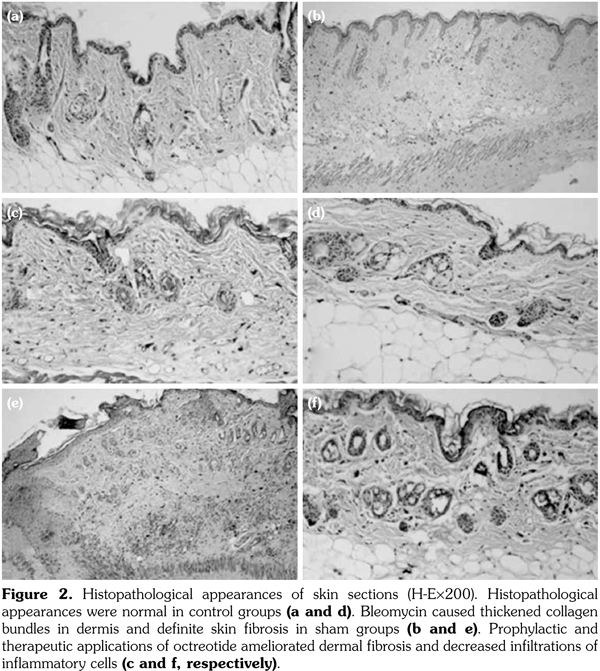 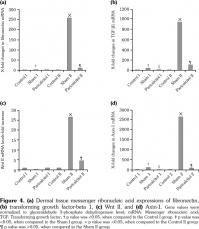 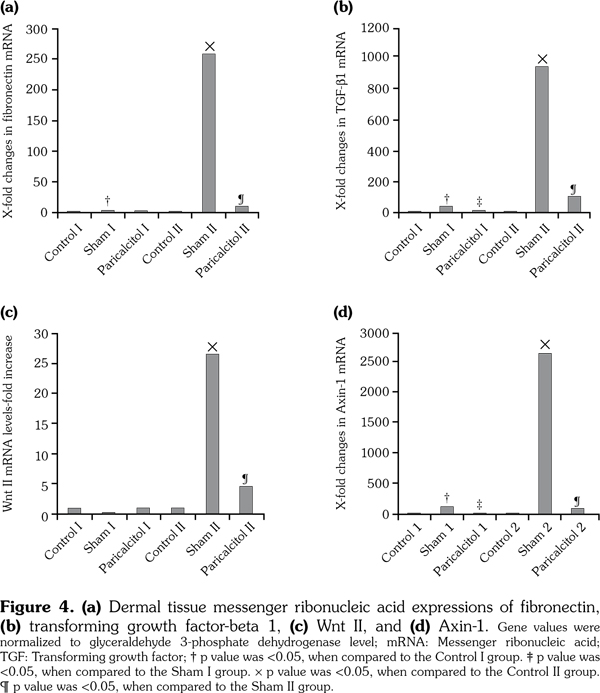 Wnt/β-catenin signaling pathway affects embryogenesis and organogenesis via contributing cell-cell interaction and cell transformation. It has been reported that dermal Wnt-2, Wnt- 10b and Wnt-11 expressions are increased in the experimental scleroderma models.(10,20) Moreover, in patients with scleroderma, skin Wnt-1 and Wnt-11 expressions have been documented to be increased, while skin DKK1 expression, an inhibitor of Wnt/β-catenin signaling pathway, is decreased.(11) Similarly, increased skin and lung tissue β-catenin levels(11) suggest that Wnt/β-catenin signaling pathway is activated in scleroderma. Wnt-3 and Wnt-10β applications have been demonstrated to induce dermal fibrosis in in vivo studies. Moreover, in in vitro setting, Wnt-3 application has induced the expression of smooth muscle actin, an indicator of myofibroblastic activity. At the end of these experiments, the researchers suggest that activated Wnt/β-catenin pathway leads to fibrosis through its effects on the fibroblastic activity and the transformations of the non-fibroblastic cells to fibroblastic cells.(10,13) In this study, BLM applications induced dermal fibrosis and increased dermal Wnt-2 and axin-1 mRNA expressions. Increased Wnt-2 and axin-1 mRNA expressions suggest that Wnt/β-catenin pathway is activated in dermal fibrosis.

The accumulations of collagen and other ECM molecules lead to fibrosis, although the pathogenesis is not fully elucidated, in scleroderma.(2) One cause of excessive ECM production is activated fibroblasts.(3,4) TGF-β acts a prominent role on the activity of myofibroblast and the production of ECM molecules.(5) In this study, the increased dermal TGF-β1 mRNA expression was detected in the dermal fibrosis model induced by BLM.

Transforming growth factor-beta is a pathogenic actor in renal fibrosis, too. In the cisplatin induced renal injury model, paricalcitol is reported to decrease apoptosis, renal injury and renal fibrosis.(22) Moreover, paricalcitol is documented to abolish the infiltration of T lymphocytes and macrophages in obstructive nephropathy model.(18) It has been shown that paricalcitol leads to anti-inflammatory and anti- fibrotic effects and ameliorates renal injury under in vitro conditions, in the cyclosporine induced renal injury model.(23) Paricalcitol has been demonstrated to deplete fibrosis induced by TGF-β1 under in vitro conditions in human renal epithelial cells.(24)