Ptosis and Mass Like Lesions in Behçet’s Disease: A Rare Presentation

Behçet’s disease (BD) is a chronic, relapsing, inflammatory disorder, characterized by recurrent oral ulcers, skin lesions, genital ulcers, and uveitis. Its etiology is unknown and the major pathology is the presence of vasculitis. BD is a multisystem disorder because of the involvement of many organs. Although central nervous system (CNS) involvement is rare, it is a serious complication causing severe morbidity and mortality.(1,2) Cerebral mass-like lesion is a rare form of neuro-Behçet’s disease (NBD). A limited number of cases of NBD presenting with intracranial mass like lesions and also ptosis were reported in the literature. In this article, we report a patient with NBD presenting with unilateral ptosis due to an intracranial mass lesion. We believe that the publication of this case report may contribute to the literature in determining the true incidence of these cases.

A 25-year-old male patient was transferred to our hospital from emergency service of an another hospital with complaints of headache, vertigo, double vision, ptosis in his right eyelid and slurred speech that were present for the last three days. In addition, dysphagia and gait imbalance causing difficulty in walking were added for the last two days. His headache was continuous and severe. It started from forehead and radiated to whole head. There was no fever or projectile vomiting. Approximately one year before, he was diagnosed as BD because of his oral and genital ulcers by a dermatologist and 2x0.5 mg/day colchicine treatment was started. After that, the patient used colchicine irregularly and his oral ulcers repeated intermittently. Patient had no history of thrombophlebitis, deep vein thrombosis or seizures previously. His lumbar puncture was performed in the former hospital and a mild lymphocytic pleocytosis combined with an elevated protein level was detected (cerebrospinal fluid protein: 169 mg/dL [normal range: 15-45 mg/dL]). A written informed consent was obtained from the patient.

On clinical examination, he was conscious (Glasgow Coma Score: 15), his cooperation and orientation were full. There was ptosis in his right eye (Figure 1) and neurologic examination revealed third cranial nerve palsy on the right side, central facial paralysis and hemihypoesthesia on the left side of his face. Also, there was dysmetria and dysdiadochokinesia on the left side of his body. His right pupil was dilated and unreactive while there was no bilateral papilledema. Muscle strength was intact (5/5), deep tendon reflexes were normoactive and plantar reflexes gave flexor response bilaterally. He had a history of uveitis attack two months before but his eye examination was normal for this time. Other systemic physical examinations were normal.

A contrast-enhanced cranial magnetic resonance imaging (MRI) was performed, which demonstrated a right-sided capsulothalamic lesion which was mild hypointense in T1-weighted images and hyperintense in T2-weighted/fluid attenuated inversion recovery images and extending from thalamus to the right cerebral pedicle, pons and superior cerebellar pedicle (Figure 2a-c). Peripheral patchy contrast enhancement was seen in thalamus and right cerebral pedicle in mesencephalon following contrast injection (Figure 2d). This lesion was interpreted as NB involvement of CNS. In diffusion MRI, defined lesion showed iso-hyperintense areas in diffusion-weighted images and low apparent diffusion coefficient. There were millimetric contrast-free parietal subcortical white matter lesions bilaterally in centrum semiovale and corona radiata level. Diffusion MRI findings were also interpreted as vasculitic lesions. Contrast- enhanced computed tomography (CT) and CT angiography of abdomen and thorax were performed for the exclusion of any thrombus or aneurysm and no abnormalities were observed. 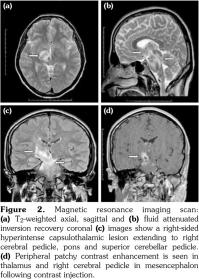 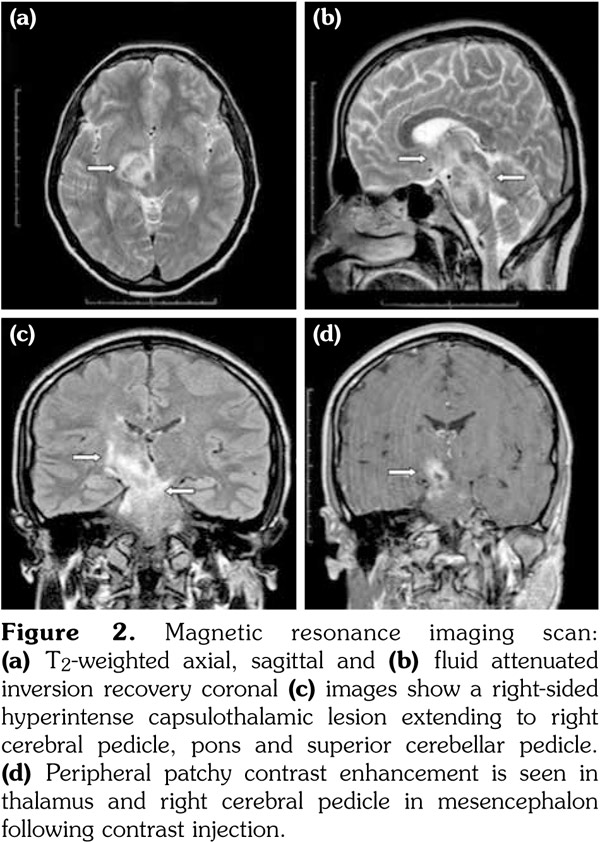 Patient was treated with intravenous 1 g pulse steroid for seven days and continuous subcutaneous low weight heparin injections. Because of the presence of poor prognostic factors, cyclophosphamide treatment was planned. In the follow-up, clinical improvement was achieved and patient was discharged from hospital. Control cranial MRI could not be performed due to losing contact with the patient.

Involvement of CNS is reported to occur in 2.2-50% of patients with BD and it is more common in males with early onset BD.(2,3) CNS involvement includes parenchymal and non- parenchymal lesions. Clinical features frequently consist of findings of cranial nerve palsies, cerebellar ataxia, and corticospinal tract involvement. Parenchymal involvement is seen more (82%) and lesions are located mostly in brainstem, diencephalon, basal ganglion, and internal capsule.

Parenchymal involvement in the form of mass-like lesion is a rare presentation and a limited number of cases were reported in the literature.(2,4-6) In contrast to classical NBD, patients with mass-like lesions mainly have one intracerebral space-occupying large lesion which is often found in the capsulothalamic area and “typical” radiological findings are infrequently reported.(7,8) Noel et al.(6) reported the first case series of mass-like form of NBD, including five personal observations and a review of 18 cases from the literature. They estimated the prevalence of the mass-like form of NBD as 1.8% in their study group (275 patients with NBD).(6) Later, Bilge et al.(2) and Tokgoz et al.(5) added two new cases to the literature.

Histopathological examination is recommended to rule out infectious lesions (bacterial abscess or tuberculoma), malignant etiologies (cerebral glioblastoma or lymphoma), and inflammatory conditions (sarcoidosis, multiple sclerosis, Wegener’s disease) and to avoid inadequate use of immunosuppressive agents.(8) However, the risk of neurological sequelae is increased with delayed diagnosis; therefore, we did not consider brain biopsy for diagnosis due to prolonged pathological examination time.

Cerebrospinal fluid examination is needed in differential diagnosis of parenchymal NBD and multiple sclerosis. In general, slightly moderate lymphocyte and polymorphonuclear cell proliferation along with moderate concentrations of protein levels are observed in NBD, as in our case.(5) So, we started immediate treatment in the light of prior BD diagnosis of our patient.

In acute attack, a high dose corticosteroid (1 g/day) is mostly used for treatment of NBD. There is no accepted specific treatment for the maintenance period but some authors suggested a life-long colchicine (1-2 mg/day), acetylsalicylic acid, and low dose corticosteroid treatments.(2,3,12) In published cases, the most common maintenance therapy was immunosuppression with cyclophosphamide or azathioprine with a dramatic improvement in clinical and radiologic manifestations in 83% of patients.(2,3,12) We also planned cyclophosphamide treatment after the intravenous pulse steroid.

In conclusion, neurologic presentations of BD are various and poorly understood. Neurologic involvement in BD may be either prior to or after the BD diagnosis. We need to consider NBD in patients with neurologic findings particularly with supporting MRI lesions. Therefore, early detection of NBD and beginning urgent treatment may prevent any neurologic sequela and increase life quality of patients.