The development of complete heart block (CHB) is a major manifestation of cardiac involvement within neonatal lupus syndrome. It is a congenital disorder and associated with the placental transmission of maternal anti-Ro/Sjögren’s syndrome type A (anti-Ro/SSA) antibodies. The neonatal atrioventricular node is vulnerable to the impaired electrical coupling secondary to apoptosis, dysfunctional calcium channels, and fibrosis.(1) It is still unknown whether this autoimmunity phenomenon is pathogenic to the adult heart. Moreover, renal involvement was previously reported in autoimmune diseases. Distal renal tubular acidosis or mesangioproliferative glomerulonephritis is the most common renal manifestation of Sjögren’s syndrome (SS) that is mediated by the pathogenesis of tubulointerstitial nephritis or immune complex-mediated glomerulopathy.(2)

There are few reports of adults with SS along with membranous glomerulonephritis and a CHB.(3,4) In this case report, we present a patient with anti-Ro/SSA positive SS and membranous glomerulonephritis, which may be associated with cardiac conduction disturbance and a CHB. Thus, we suggest that middle-aged patients with SS and clinical symptoms of dizziness or near-syncope should be alerted about the possibility of insidious heart conduction problems.

A 57-year-old female patient had a medical history of hypertension and dyslipidemia. Five years ago, she had an initial presentation of dry eye and mouth symptoms for a period of six months. Sialoscintigraphy showed impaired function of the bilateral submandibular and parotid glands. The result of Schirmer’s test (right eye) was about 4 mm. Antinuclear antibodies titer was 1:160 with positive speckled pattern. Anti-Ro/SSA was positive (146.0 μ/mL, normal: 7-10μ/mL) and Anti-La/Sjögren’s syndrome type B was negative. Anti-double stranded deoxyribonucleic acid was not found. There was no musculoskeletal, neurological or vascular involvement. The patient was diagnosed with primary SS and received regular follow-up at outpatient clinics where hydroxychloroquine (200 mg daily) and symptomatic relief was given. Subsequently, the patient developed proteinuria. After a renal biopsy, the patient was diagnosed with membranous glomerulonephritis (Figures 1a, b), apart from tubulointerstitial nephritis or mesangioproliferative glomerulonephritis. Additionally, the patient was given diuretics, angiotensin II receptor blocker, and statin. After medical therapy, the patient’s clinical condition improved, and as a result, she did not undergo any immunosuppressive therapy. The patient visited our cardiology outpatient clinic because of her symptoms of dizziness and near- syncope for several months. Physical examination showed a regular heart beat associated with grade II/VI systolic murmur over the apex. Serum free T4 and creatinine levels were 1.23 ng/dL (0.7-1.8 ng/dL) and 0.85 mg/dL (0.6-1.3 mg/dL), respectively. Serum electrolyte levels, including sodium, potassium, calcium and phosphorous were also within the normal limit. Although chest radiography was borderline positive for cardiomegaly, the patient denied having symptoms of congestive heart failure, such as shortness of breath or exercise intolerance. A 12-lead electrocardiography (ECG) demonstrated a sinus rhythm and one non-conducted sinus beat at the outpatient clinic (Figure 2a). The echocardiography showed a preserved left ventricle systolic function without a regional wall abnormality, but a 24-hour Holter ECG exhibited episodes of complete atrioventricular blocks (CAVB) with a long pause of 6.2 seconds (Figure 2b). The patient was hospitalized and eventually received permanent pacemaker implantation, after which the patient's symptoms of dizziness and general weakness improved completely. A written informed consent was obtained from the patient.

Figure 1. (a) Light microscopic appearance of membranous nephropathy is seen in rounded capillary lumina with mild thickening of glomerular basement membrane in all non-sclerotic glomeruli. Global sclerosis is observed in five out of 11 glomeruli. (b) A silver stain of glomerulus highlighting proteinaceous basement membranes (black) is noted. Hematoxylin & eosin stain and sliver stain with very high magnification (x400).
× 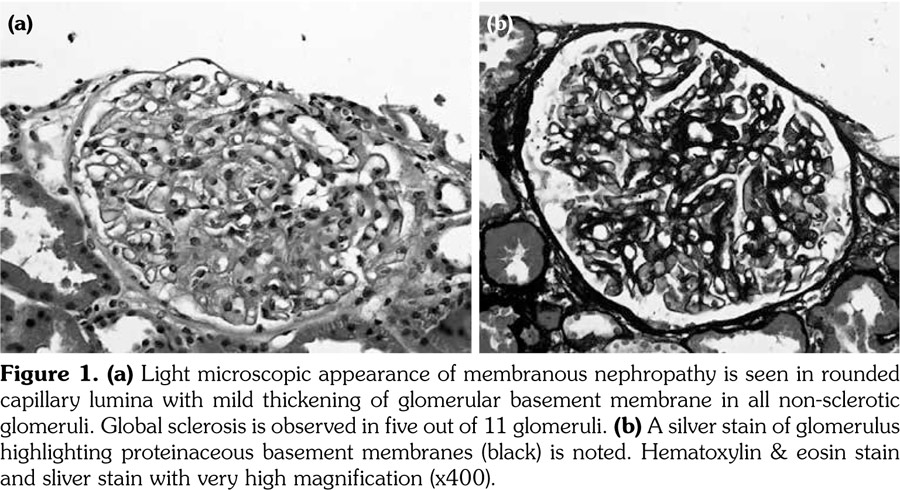 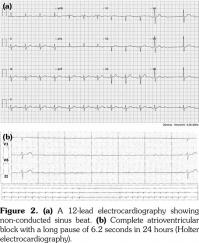 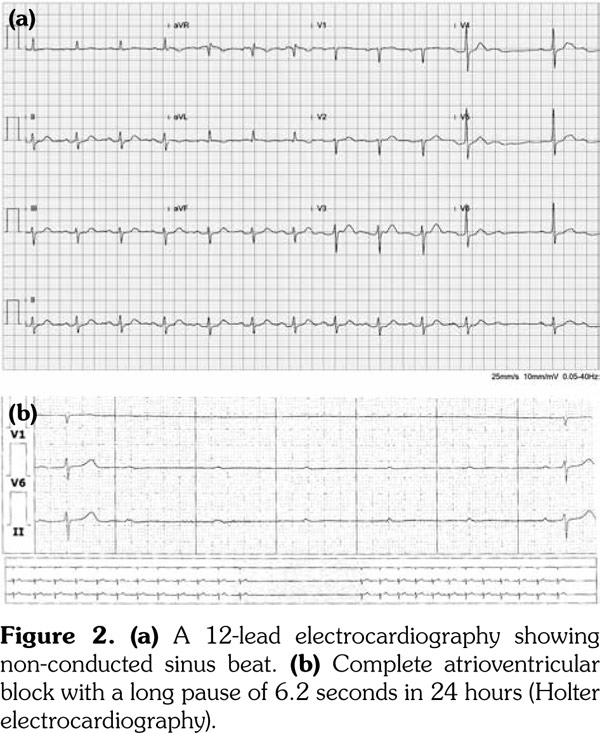 Transplacental passage of anti-Ro/SSA  antibodies is a well-documented cause of atrioventricular block and conduction defects in newborns with neonatal lupus syndrome. However, this is rarely reported in adults. In this case study of a middle-aged patient with positive anti-Ro/SSA antibodies and CAVB, we suggest that the antibodies may be critically involved in the development of conduction disturbances in certain adults. The potential pathophysiology and mechanism may be partially or completely different from the conduction defects found in neonatal lupus syndrome. We speculate that anti-Ro/SSA antibodies may be arrhythmogenic for adults.

For the theory of calcium channelopathy, Lazzerini et al.(12) demonstrated neonatal heart involvement and arrhythmogenic impact on an adult heart using anti-Ro/SSA antibodies. Anti-Ro/SSA antibodies could be related to the dysregulation of calcium channels, as highly expressed in the atrioventricular and sinoatrial nodes. The conduction system tissue damage may be related to higher calcium channel reserves and lower intrinsic sensitivity of adult cardiomyocytes. Calcification and fibrotic tissue are deposited at the atrioventricular node and other conduction systems. Fibroblasts can also significantly reduce electrical coupling, while also slowing down and blocking the conduction system, which may be a cause of CHB in adult patients.

Previous studies have demonstrated that anti-Ro/SSA antibodies are associated with the incidence of a CAVB, mostly in patients with systemic lupus erythematosus, but rarely in patients with primary SS (Table 1).(3,6-8,10,11,16,17) Although our patient had other possible risk factors, such as aging or hydroxychloroquine cardiotoxicity for a CAVB,(18) anti-Ro/SSA antibodies should also be considered as a potential cause for CAVB. However, additional studies with larger sample sizes should be carried out to warrant this result.

Table 1. Association between Anti-Ro/SSA and complete atrioventricular block in patients with autoimmune disease
×

Heart block in adults with SS is classified into acquired and late progressive congenital forms.(11) Regardless of the prevalence of an autoimmune disease, the absence of anti-Ro/SSA antibodies in the patient’s mother is required to diagnose the acquired form. In the acquired form, the conduction defect may be related to the calcium channel and electrophysiological interference of anti-Ro/SSA antibodies, and as a result, immunosuppressive agents may be more effective in recovering the function and integrity of the cardiac conduction system.(11,19)

Sjögren’s syndrome is a slowly progressing disease that is different from lupus erythematous and rheumatoid arthritis in its robust clinical manifestation. Other sites of extra-glandular inflammation include the lung, blood vessel, skin, and heart. Alterations of renal function in SS are common. Two forms of renal involvement with primary SS can be found in 4.2-67% of patients, due to lymphocytic infiltration or an immune- complex deposition.(2)

In conclusion, we have documented this case report on a patient with SS, membranous glomerulonephritis and an initial presentation of one non-conducted sinus beat in a 12-lead ECG. Eventually, the patient had an occult CAVB, besides SS and extra-glandular involvement. Diagnostic tools, including a 24-hour Holter ECG and electrophysiological study, should be considered in evaluating the insidious CAVB associated with the existence of anti-Ro/ SSA antibodies, particularly in some patients with near-syncope and dizziness symptoms. This case report indicates that anti-Ro/SSA antibodies are also associated with adult-onset of CAVB. Further studies on the pathogenic role of anti-Ro/SSA are necessary to clarify the precise and putative mechanism that involves conduction disturbances. This knowledge may help us to identify better therapeutic options and diagnostic screenings for this specific population.