Immunoglobulin G4-related lung disease (IgG4-RLD) is a disease in which abundant activated IgG4-positive plasma cells and lymphocytes infiltrate lung tissues with high 18F-fluorodeoxyglucose uptake. Although various forms of radiologic features of IgG4-RLD have been reported, cavitating mass is a rare imaging feature and should be differentiated from cancer. Therefore, in this article, we report two cases both with unprovoked cough, bloody sputum and presenting quite similar cavitating lesions with high 18F-fluorodeoxyglucose uptake on positron emission tomography/ computed tomography, one of which diagnosed as IgG4-RLD and the other as lung cancer based on biopsy eventually. The awareness of the imaging features of IgG4-RLD and lung cancer described in the present study may help physicians to distinguish one from the other. IgG4-RLD should be considered in the differential diagnosis of cavitary lung lesions.

Immunoglobulin G4-related lung disease (IgG4- RLD) is a disease in which IgG4-positive plasma cells and lymphocytes infiltrate lung tissues along with immunohistochemically evident fibrous interstitial proliferation in the background.(1,2) Since the first report of a patient with IgG4-RLD in 2004,(3) many similar patients have been described.(2) However, there are scarce cases focusing on IgG4- RLD in 18F-fluorodeoxyglucose (FDG) positron emission tomography/computed tomography (PET/CT) imaging feature.(1,4) In addition, the manifestation of IgG4-RLD were mostly described as parenchymal nodules or masses, interstitial lung disease, mediastinal lymphadenopathy, and fibrosing mediastinitis;(1,2,4,5) however, few studies reported cavitating IgG4-RLD.(6) In this article, we report two cases presenting quite similar cavitating lesions with high 18F-FDG uptake on PET/CT, one of which diagnosed as IgG4-RLD and the other as lung cancer based on biopsy.

Case 1- A 65-year-old nonsmoking Chinese female patient had unprovoked cough accompanied with bloody sputum for one month. However, the patient had no other symptoms such as fever, thorax suffocation or breathing hard. The laboratory reports showed elevated serum level of C-reactive protein (11.6 mg/L, reference range 0.6-6.0 mg/L), erythrocyte sedimentation rate (66.00 mm/H, reference range 0-20 mm/hour) and depressed hemoglobin (112 g/L, reference range 115-150 g/L), while other measured laboratory data were within normal limits including serum leukocyte, tumor markers and anti-mycobacterium tuberculosis antibody. The serum IgG4 was not analyzed initially. A written informed consent was obtained from the patient.

18F-fluorodeoxyglucose PET/CT (GE Discovery 690, GE Healthcare, Milwaukee, USA) imaging displayed a poor-defined 55.9∞29.5 mm irregular lesion with round low-density inside in the right S3 segment (Figure 1a) at mediastinal window setting. The interface between the lesion and surrounding organs was unclear but the inner wall was smooth. The lesion was with a well-demarcated high 18F-FDG uptake thick-walled cavity measuring 28∞23 mm, with a maximum standardized uptake value (SUVmax) of 9.7 (Figure 1b), and the right lung hilus and mediastinal lymph node were enlarged with a SUVmax of 6.4 (Figure 1c). Lung cancer was initially suspected based on PET/CT finding. However, histopathological examination (ultrasound-guided fine-needle biopsy, Figure 2) demonstrated IgG4-RLD. The serum level of IgG4 was complementarily analyzed and noted to have been slightly elevated to 148 mg/dL (reference range ≤135 mg/dL). 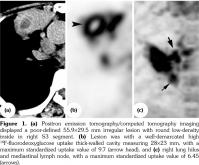 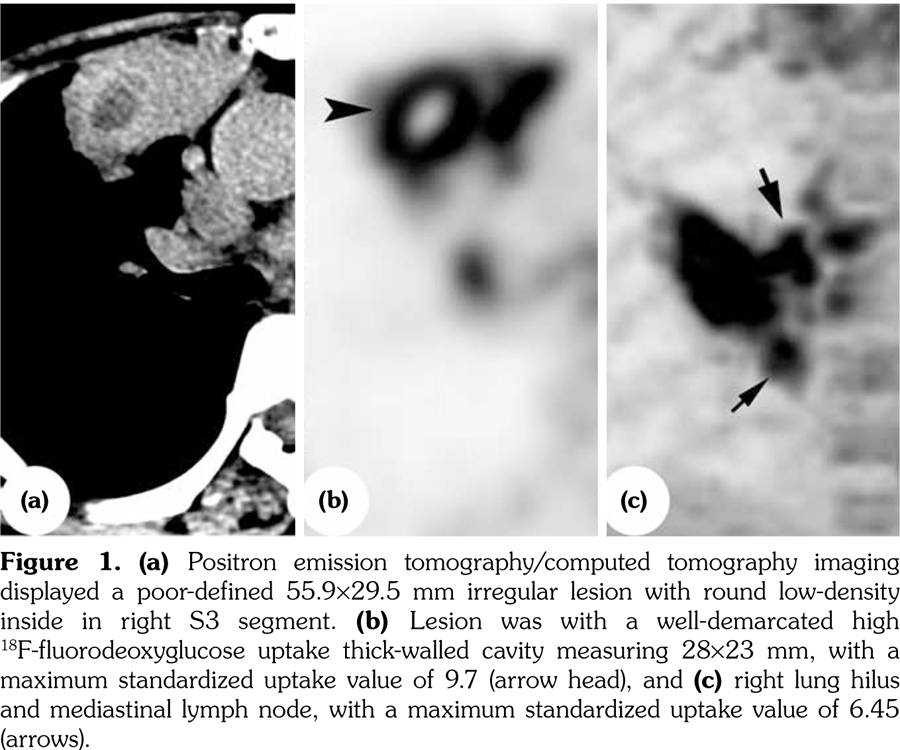 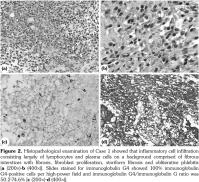 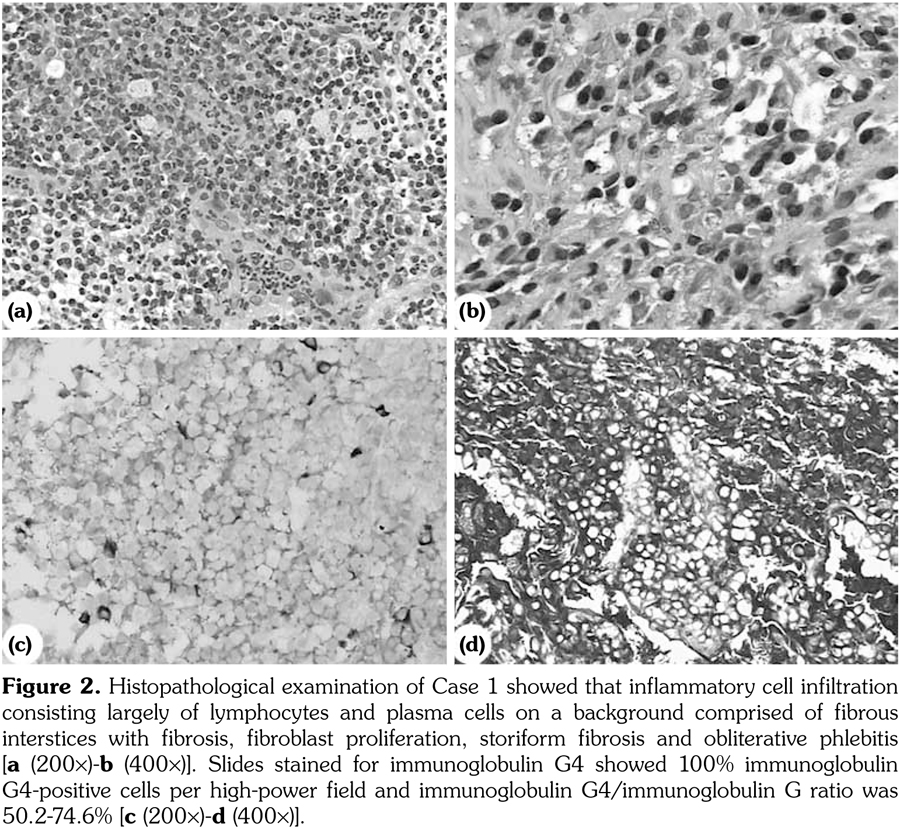 18F-fluorodeoxyglucose PET/CT imaging displayed an ill-defined 40∞45 mm irregular lesion with low-density inside in the right S3 segment (Figure 3a). The interface between the lesion and surrounding organs was unclear and the inner wall was irregular. The lesion was with a circular-nodular high 18F-FDG uptake thick-walled cavity measuring 40∞36 mm, with SUVmax of 20.7 (Figure 3b), and the right lung hilus and mediastinal lymph node were enlarged with SUVmax of 4.7 (Figure 3c). Moderately differentiated lung squamous cell carcinoma was confirmed by histopathological examination (CT-guided fine-needle biopsy, Figure 4). 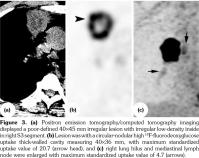 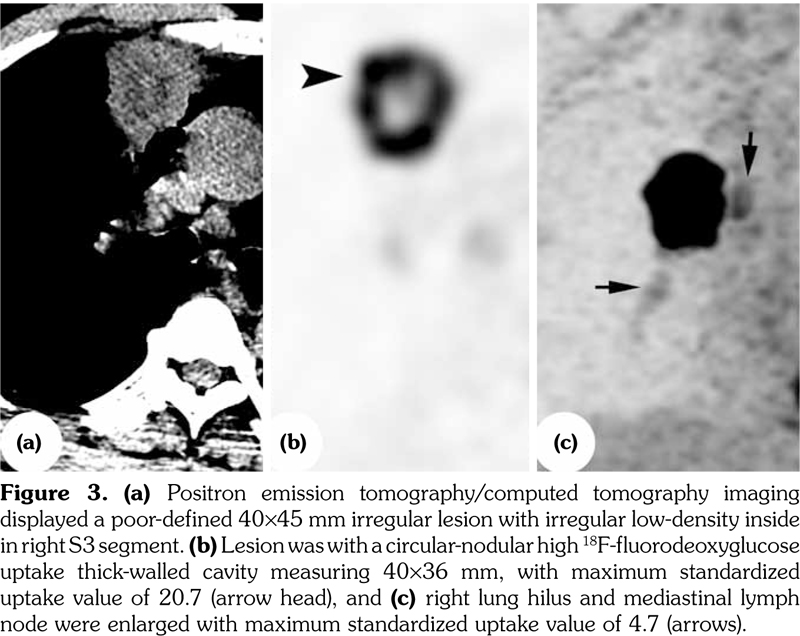 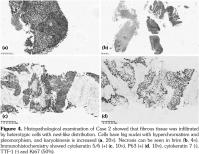 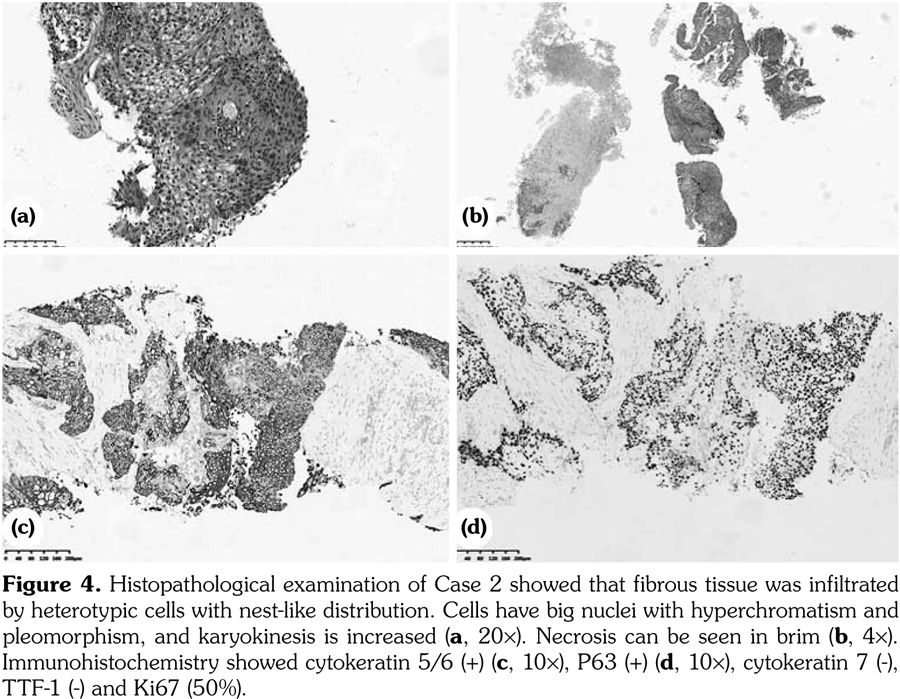 Taira et al.(11) reported a case with cavitating lesion in which a lung abscess was initially suspected, but the pleomorphic carcinoma of lung was ultimately confirmed. They suggested that both abscesses and malignancy should be suspected in cases involving masses presenting as ring-enhancing lesion on contrast-enhanced CT. Lung cancer appears as a quite irregular internal and outer contour cavity on CT.(12) Both of our cases were initially suspected as lung cancer based on the high 18F-FDG uptake thick-walled cavitating featured with irregular parenchyma around the cavity and enlarged lymph node. However, Case 1 was with a well-demarcated high 18F-FDG uptake, while Case 2 was with a circular-nodular high 18F-FDG uptake. Nodular high 18F-FDG uptake like nodular enhancement seen in contrast-enhanced CT may be one of the most important features in making a differential diagnosis between intracavitary IgG4-RLD and a cavitating lung cancer.(13)

Blood examination should be performed, which play an important role in diagnosing IgG4- RLD and lung cancer. The serum level of IgG4 of Case 1 was complementarily analyzed and found to be mildly elevated as most of previous reports.(1,2,4,6,10,14) Serum level of IgG and IgG4 is the most sensitive and specific laboratory test for the diagnosis of IgG4-RLD. NSE and CYFRA 21-1 are both tumor markers for primary lung cancer and may be useful complements to standard clinical imaging methods.(15) The serum level of NSE and CYFRA 21-1 of Case 2 were elevated. However, the cases of Taira et al.(11) were within normal tumor markers as Case 1. Thus, negative serum NSE and CYFRA 21-1 cannot be used as exclusion criteria of lung cancer.

In conclusion, IgG4-RLD presents various forms of radiologic features and high 18F-FDG uptake for abundant activated inflammatory cell infiltration. Cavitary mass is a rare imaging feature of IgG4-RLD and should be differentiated from lung cancer, especially in patients with bloody sputum. Elevated serum IgG4 and nodular high 18F-FDG uptake may be one of the most important features in making a differential diagnosis between intracavitary IgG4-RLD and lung cancer.