Cryptococcal Meningitis in A Patient With Giant Cell Arteritis

Giant cell arteritis (GCA) is the most common vasculitis of the elderly, primarily affecting individuals over 50 years of age. The incidence increases with age, peaking around the age of 80 years.(1,2) High-dose glucocorticoids are the first-line treatment for GCA and their use may be prolonged. Consequently, the majority of patients experience glucocorticoid-related side effects.(2) Severe infections and infection-related mortality are increased during the first year after the diagnosis of GCA.(3) Cryptococcosis is a fungal infection caused by Cryptococcus neoformans, and is generally associated with immunodeficiency and immunosuppressive agents. Cryptococcosis often involves the central nervous system and is rarely reported in GCA. GCA mainly presents as headache and fever and can be associated with stroke,(4,5) so, when complicated by cryptococcal meningitis, the diagnosis is often delayed. In this article, we present the case of a 65-year-old female patient with GCA who presented with cryptococcal meningitis.

A 65-year-old female patient was admitted to the hospital because of persistent headache and fever (37.5-39°C) of five days duration. She had a history of GCA six years ago and relapsed four months prior to admission. According to our diagnostic work-up, the patient did not have any diseases other than GCA. A written informed consent was obtained from the patient.

Six years ago, the patient was admitted with fever, headache, and transient vision loss. Laboratory findings indicated erythrocyte sedimentation rate of 110 mm/hour (normal 0-20 mm/hour) and C-reactive protein of 100 mg/L (normal <5 mg/L), while the cerebrospinal fluid (CSF) analysis and cranial magnetic resonance imaging were normal. To further clarify the diagnosis, a temporal artery biopsy was performed, and the results confirmed the GCA diagnosis (Figure 1). She was treated with prednisone and azathioprine for about six months. Over the past four years, she did not have any uncomfortable symptoms or receive any drugs. 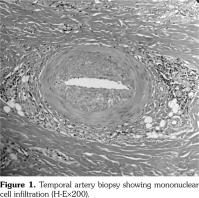 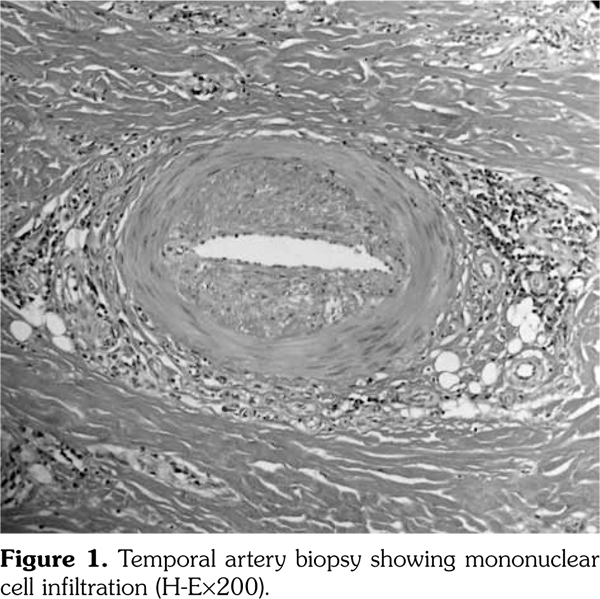 Four months ago, she relapsed with fatigue, fever, and headache. She was treated with 60 mg prednisone per day and showed improvement in her symptoms of headache and fatigue. Her prednisone dosage was reduced to 25 mg per day and azathioprine 50 mg per day when in hospital at this time.

On admission, the patient was febrile (38.5°C) and had a moderate headache. Examination was remarkable for neck stiffness and bilateral papilledema. General physical, neurological, and systemic examinations were normal. Laboratory findings were as follows: erythrocyte sedimentation rate of 120 mm/hour (normal 0-20 mm/hour), C-reactive protein level of 125 mg/L (normal <5 mg/L), white blood cell count of 8.8∞10(9)/L (normal 4∞10(9)-10∞10(9)/L) with normal differential count, hemoglobin level of 10.4 g/dL (normal 12-16 g/dL), platelet count of 560∞10(9)/L (normal 100∞10(9)-300∞10(9)/L), and fibrinogen level of 8.2 g/L (normal <4.3 g/L). Other biochemical findings including a test for human immunodeficiency virus were negative or within the reference limits. Computed tomography of the thorax and abdominal ultrasound showed normal findings. Microbiological analysis of urine and multiple blood samples yielded sterile findings. Sternal puncture findings were normal. Laboratory tests for systemic or malignant diseases were negative or within the normal range. CSF analysis showed that India ink staining was positive for cryptococcus (Figure 2). CSF pressure was 22 cm H2O, and contained 10 cells/μL, all lymphocytes, elevated protein (2.38 g/L), low glucose (31 mg/dL), CSF/serum glucose ratio=0.14, and adenosine deaminase of 7 IU/L. The cranial magnetic resonance imaging was unremarkable (Figure 3). Azathioprine was suspended, prednisone was tapered off to 10 mg per day, and amphotericin B and 5-flucytosine were introduced for six weeks. Clinical response was good. There were no neurological sequelae or relapse after 20 months of follow-up. 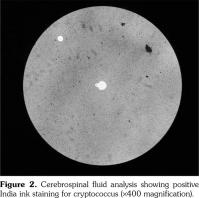 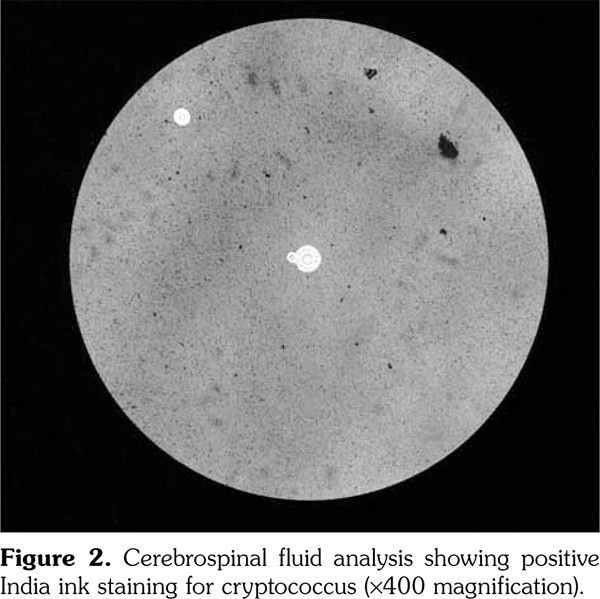 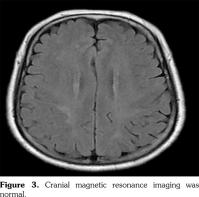 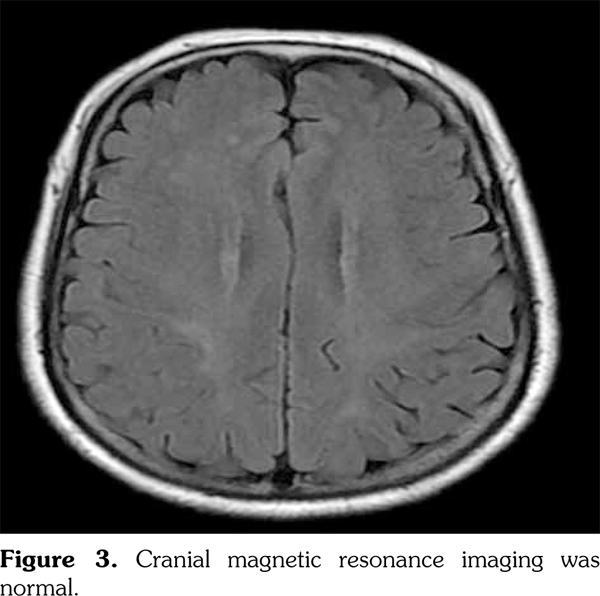 Giant cell arteritis is the most common primary vasculitis,(6) predominantly affecting older individuals. Common manifestations include headache, fever, morning stiffness and pain in the shoulder and/or hip girdle, ischemic stroke, visual disturbance, and/or permanent vision loss. GCA often requires high and sometimes sustained corticosteroid therapy to prevent the development of sight-threatening complications.(7) Nearly half of the patients experience relapses during the tapering of glucocorticoids and recurrence on glucocorticoid withdrawal.(8,9) In these patients, glucocorticoid therapy can rapidly lead to infectious complications, mainly with opportunistic pathogens.

Our patient’s presenting symptoms were persistent headache and fever, later followed by vomiting. The diagnosis of this patient was cryptococcal meningitis with features of elevated intracranial pressure and the differential diagnosis included GCA relapse and other septic meningitis. Any intracranial space-occupying lesion was excluded by the normal brain imaging.

Giant cell arteritis patients appear to be at risk for opportunistic infections for at least three possible reasons. First, the most important of these risk factors is the use of high-dose long-term corticosteroids. Owing to immunosuppression, treatment-related infections are common and represent an important cause of early mortality.(14,15) Second, most reports have included patients over 65 years of age, and aging has been shown to decrease both cellular immunity and humoral immunity in humans.(16,17) Third, the presence of GCA itself may increase susceptibility to infection through macrophage and T cell activation leading to dysregulation of the immune system.(18,19)