Objectives: This study aims to determine the predictors of poor sleep quality in rheumatoid arthritis (RA).
Patients and methods: This was a monocentric, cross sectional, case-control study which was conducted at the Putrajaya Hospital, Malaysia. We recruited 46 patients with RA (3 males; 43 females; mean age 48.15±14.96) and 46 age and sex-matched healthy controls (3 males; 43 females; mean age 47.11±12.22). RA patients were assessed for their disease activity based on disease activity score in 28 joints, disease damage based on radiographic erosions, and functional status based on Health Assessment Questionnaire Disability Index. The Pittsburgh Sleep Quality Index (PSQI) scores were determined by interviewing all the subjects. Subjects with RA were further subdivided based on their PSQI scores as “good sleepers” with PSQI scores of <5 and “poor sleepers” with PSQI scores of ≥5.
Results: The percentage of poor sleepers was significantly higher among RA patients (47.83% versus 9.57%). Median scores of 5 out of 7 components of the PSQI were higher among RA patients compared to controls. Among poor sleepers with RA, a significantly higher proportion tested positive for anti-citrullinated cyclic peptide autoantibodies (p=0.037). Besides, poor sleepers had significantly higher median Health Assessment Questionnaire Disability Index (p=0.017) than good sleepers. However, both Health Assessment Questionnaire Disability Index (p=0.968) and anti-citrullinated cyclic peptide (p=0.431) were insignificant when entered in the equation of a logistic regression model.
Conclusion: The findings of this study demonstrate a link between functional disability, anti-citrullinated cyclic peptide antibodies, and sleep quality in RA.

Sleep exerts a significant regulatory influence on immune functions through complex mechanisms which are poorly understood. Studies on the normal sleep-wake cycle revealed that immune parameters such as undifferentiated T cells and pro-inflammatory cytokines tend to peak during early nocturnal sleep whereas cytotoxic natural killer cells, as well as anti-inflammatory cytokines peak during daytime wakefulness.(5,6) Comparisons of the effects of nocturnal sleep with sleep deprived subjects (24-hour periods of wakefulness) suggest that sleep facilitates the extravasation of T cells and their possible redistribution to lymph nodes. There seems to be a selectively enhancing influence of sleep on the interaction between antigen presenting cells and T helper cells.(7)

Research in neuroimmunology has accumulated substantial evidence indicating that sleep enhances immune defense, along the lines of lay people’s popular wisdom, “sleep helps healing”.(8,9) Sleep reduces the production of interferon-gamma as well as tumor necrosis factor-alpha by cytotoxic T lymphocytes,(10) which are key orchestrators in the pathogenesis of RA.

Sleep quality is an important component of the quality of life which is often overlooked by clinicians. Restorative sleep has an important role in maintaining health with disrupted or lower levels of sleep being related to an increased risk of co-morbidity and all-cause mortality.(11) Thus, addressing poor sleep quality may be important in promoting health and well-being in patients with RA. In fact, recent clinical trials in RA have incorporated sleep quality as one of the outcome measures.(12) Hence, in this study, we aimed to determine the predictors of poor sleep quality in RA.

This was a monocentric, cross sectional, case- control study which was conducted between January 2015 and August 2015 at the Putrajaya Hospital, Malaysia. The study included 46 patients with RA (3 males, 43 females; mean age 48.15±14.96) and 46 age and sex- matched healthy controls (3 males, 43 females; mean age 47.11±12.22). A written informed consent was obtained from each patient. The study proposal was reviewed and approved by the Ethics & Research Committee of the center (Study Code 21032). The study was conducted in accordance with the principles of the Declaration of Helsinki.

We recruited patients with RA from the rheumatology outpatient clinics. We invited patients who fulfilled the inclusion and exclusion criteria to participate in this study. We briefed individuals with poor command of English with the assistance of a translator.

We recorded the demographic data such as age, sex, and race of all subjects. We collected data on disease duration and laboratory parameters by reviewing the computerized medical records of the RA patients. We assessed the patients for their disease activity based on disease activity score in 28 joints (DAS28) and performed hand and feet radiographs to examine any joint erosions. We used The Health Assessment Questionnaire Disability Index (HAQ-DI) for the evaluation of the functional status of the RA patients. We determined The Pittsburgh Sleep Quality Index (PSQI) scores by interviewing all the subjects. A single interviewer conducted the interviews to minimize bias.

Disease Activity Score in 28 joints is a quantitative measure of disease activity in RA. It has a validated formula which is used worldwide particularly in clinical trials.(14) The four parameters used to calculate DAS28 are number of swollen joints, number of tender joints, C-reactive protein or erythrocyte sedimentation rate, and the patient’s global assessment.(15) DAS-28 score of 3.2 and above indicate moderate to severe disease activity whereas a value below 3.2 refers to remission to low disease activity.(16)

The HAQ-DI is the most widely used tool for functional assessment in RA.(17) The HAQ-DI evaluates patients’ level of functional ability involving the upper and lower limbs. There are 20 questions in eight categories which represent a comprehensive set of common daily activities: dressing, rising, eating, walking, and hygiene. Higher scores indicate more disability (0= without any difficulty; 1= with some difficulty; 2= with much difficulty; and 3= unable to do). A HAQ-DI score of 1 and above indicate significant (moderate to very severe) functional disability.(18)

The PSQI measures patients’ reported sleep quality over a period of one month. The PSQI comprises seven main components: (i) subjective sleep quality, (ii) sleep latency, (iii) sleep duration, (iv) habitual sleep efficiency, (v) sleep disturbances, (vi) use of sleep medications, and (vii) daytime dysfunction. In all seven components, a score of 0 indicates no difficulty whereas a score of 3 indicates severe difficulty. A PSQI score of 5 or above is recommended as the cutoff for sleep impairment.(19)

As RA is more common among females, majority of the subjects (93.48%) were females. The subjects were of three main ethnicities: Malays, Chinese, and Indians. The sociodemographic characteristics of RA patients and controls were matched (Table 1). 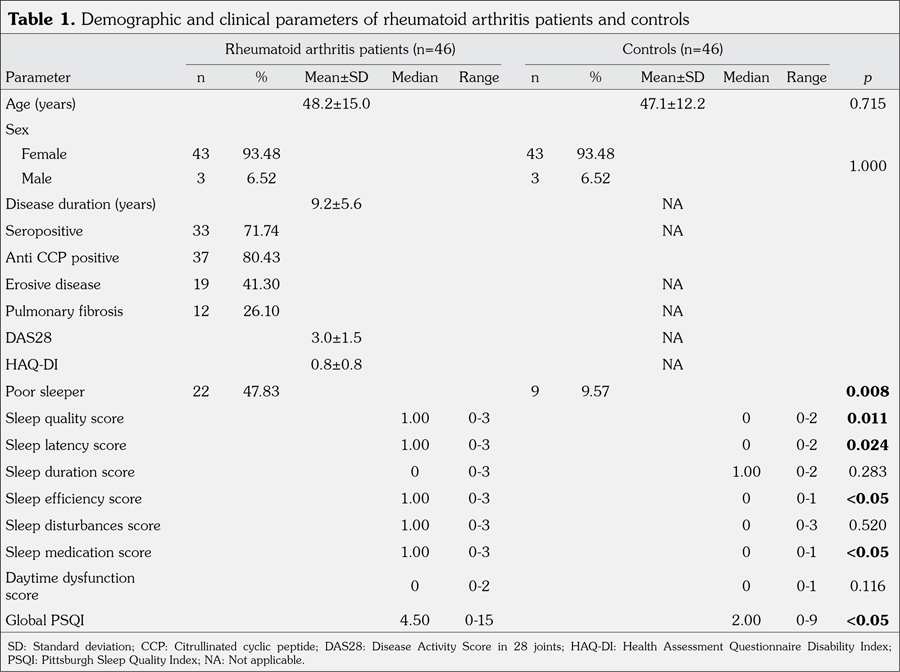 Table 2 compares the clinical characteristics of good sleepers and poor sleepers with RA. Among poor sleepers, a higher proportion of patients tested positive for rheumatoid factor and anti-citrullinated cyclic peptide (anti- CCP) autoantibodies. The difference, however, was only statistically significant (p=0.037) for anti-CCP. Although the median DAS28 was comparable in both groups, poor sleepers had a higher frequency of erosive disease (50.0% vs 33.3%) and pulmonary fibrosis (36.4% vs 16.7%). Besides, poor sleepers had significantly higher median HAQ-DI (p=0.017) than good sleepers. There was no significant correlation between the global PSQI scores and the following continuous variables: DAS28 (p=0.589), HAQ-DI (p=0.643), and disease duration (p=0.352). Variables, which were significant on univariate analysis (HAQ-DI and anti-CCP), were further analyzed using the logistic regression model. Both HAQ-DI (p=0.968) and anti-CCP (p=0.431) were insignificant when entered in the equation.

Sleep quality is a core component of quality of life which has not received the attention it deserves and hence, not been dealt with adequately in RA.(12) Our findings demonstrate that patients with RA have significant impairment of sleep quality compared to healthy controls. Previous case-control studies in this regard with healthy controls have reported similar results.(3,20) Sleep disturbances in RA tend to be multifactorial. Beyond pain, there appears to be a complex and dynamic interplay between the clinical aspects of RA and sleep quality.(21)

This study highlights that functional disability is associated with poor sleep quality. Poor sleepers had significant functional disability (median HAQ-DI of 1.25) as compared to good sleepers who hardly had any difficulty (median HAQ-DI of 0.38). In keeping with our findings, Luyster et al.(22) and Sariyildiz et al.(3) found a significant positive correlation between PSQI and HAQ scores. In this study, however, hierarchical regression and multivariate analyses failed to show a significant relationship between HAQ-DI and sleep quality when other variables were entered into the model. The cause-effect relationship between sleep disturbances and functional disability may be bidirectional. This notion was supported by a multi-center, placebo-controlled study which reported that eszopiclone 3 mg, a nonbenzodiazepine hypnotic agent, resulted in significant improvement in functional capacity in RA based on the HAQ scores in four weeks of treatment.(23) Apart from RA, a nexus has been identified between functional limitation and sleep impairment in many other chronic medical conditions.(24,25)

The anti-CCP antibody test is a useful diagnostic and prognostic tool in RA.(26) Studies have consistently pointed out the role of this antibody as a strong predictor of joint erosions in RA.(27) RA patients who test positive for anti-CCP antibody are more prone to develop progressive joint damage.(28) The severity of joint damage tends to parallel the degree of functional disability in RA. This may explain our finding of higher HAQ scores and anti-CCP positivity among poor sleepers. To our knowledge, no studies in the literature have reported similar results. Along these lines, Ibn Yacoub et al.(29) reported that Moroccan RA patients who were anti-CCP positive had higher HAQ scores. Based on our multivariate analyses, neither HAQ-DI nor anti-CCP was an independent predictor of poor sleep quality.

In contrast to previous studies, we detected no link between disease activity and sleep quality.(3,30) The study by Taylor-Gjevre et al.(31) demonstrated improved sleep efficiency and “awakening after sleep onset” time observed by polysomnography in RA patients treated with anti-tumor necrosis factor-alpha therapy. However, the mean PSQI scores increased (10.4 to 10.8) with the therapy despite significant reduction in the disease activity (p=0.048). In principle, patients with higher disease activity experience greater pain leading to sleep disturbances. It is not clear why there was no difference in the DAS28 scores between good sleepers and poor sleepers.

We do acknowledge the limitations of our study. Our assessment of sleep quality was based on a questionnaire which is rather subjective. Polysomnography is a more objective alternative in this regard. Furthermore, our small sample size limits the detectable effect size. Besides, a prospective study design can more accurately reveal the relationship between the disease characteristics and sleep quality.

Taken together, the findings of this study demonstrate a link between functional disability, anti-CCP antibodies, and sleep quality in RA. Given the importance of sleep quality, clinicians should routinely perform sleep quality assessments when evaluating patients’ response to treatments.