Objectives: This study aims to determine the carrier frequency and the most common mutations of the Mediterranean FeVer (MEFV) gene in healthy Cypriot population of Turkish origin.
Patients and methods: A total of 296 healthy participants (102 males, 194 females; median age 30 years; range 1 to 81 years) were evaluated. The exon 2, 3, 5 and 10 of MEFV genes were amplified by polymerase chain reaction.
Results: The participants demonstrated an extremely high carrier rate (12.5%). Most commonly detected mutations were E148Q and A74S, with rates of 7.3% and 2.8%, respectively.
Conclusion: Mediterranean FeVer gene mutation types and carrier rates in Turkish Cypriot population are different than other Mediterranean populations in the region. MEFV mutation carriage is frequent in North Cyprus and familial Mediterranean fever might be one of the causes for end stage renal disease in Turkish Cypriots.

Familial Mediterranean fever (FMF) is an autosomal recessively inherited disease characterized by autoinflammatory episodes of recurrent fever and serosal inflammation of the periton, pleura, and synovia. The disease is caused by mutations in Mediterranean fever gene (MEFV) which has been cloned in 1997.(1) MEFV gene is located on the short arm of chromosome 16, consists of 10 exons and encodes a protein of 781 amino-acids named Pyrin/Marenostrin. This protein is expressed in granulocytes and plays an essential role in the inflammatory response. Although phenotype- genotype correlations of the disease have not been clarified definitely, current data suggest that expression of more severe disease and increased susceptibility to amyloidosis are detected in patients who have the M694V mutation.(2)

Familial Mediterranean fever usually affects Mediterranean populations like Ashkenazi Jews, Armenians, Turks, Italians, and Iranians. In Israel, there are different prevalence rates according to the origin of the populations. Disease frequency is 1:200 in North African Jews whereas 1:160,000 in Ashkenazi Jews originating from Central Europe.(3,4) In the Turkish population, epidemiological studies have shown that the prevalence of FMF is approximately 1:1,000.

Cyprus is the third largest island in the Mediterranean Sea with two separated communities; Turkish and Greek Cypriots. Turkish Cypriots live in the north of the island in the Turkish Republic of Northern Cyprus with a population of approximately 300,000, while Greek Cypriots live in the south in the Republic of Cyprus.(5) The prevalence of MEFV mutations in Greek Cypriots with FMF disease was first reported in 2002.(6) Prevalence of MEFV mutations in Turkish Cypriot population has not been studied yet. Therefore, in this study, we aimed to determine the carrier frequency and the most common mutations of the MEFV gene in healthy Cypriot population of Turkish origin.

A total of 296 healthy subjects (102 males, 194 females; median age 30 years; range 1 to 81 years) were included and tested for mutations in MEFV gene. The study population was selected between October 2013 and June 2014 from healthy adults or children who (i) admitted to the blood sampling room of The Near East University Hospital and agreed to give an extra tube of blood sample; (ii) were Turkish Cypriots born from both Cypriot parents whose ancestors originated from Cyprus for three generations; (iii) had no personal or family history of FMF; (iv) signed the informed consent form. After enrollment, participants were evaluated with a questionnaire seeking information on birth place, inherited genetic and rheumatologic diseases, history of apendectomy and having any of the Tel-Hashomer criteria (peritonitis, arthritis, scrotal inflammation, chest pain, erysipeloid skin eruptions, or myalgia). The study was approved by the Ethics Committee of Near East University. The study was conducted in accordance with the principles of the Declaration of Helsinki.

Distribution of participants’ birth places in Cyprus are shown in Figure 1. The mutation carriage frequency detected among this healthy population was 12.5%. Detailed results of MEFV genes allele frequencies are presented in Table 2. The most commonly detected mutations were E148Q and A744S, with the percentages of 7.3% and 2.8%, respectively (Table 3). Interestingly, genetic polymorphism in the R202Q gene was detected in 25.7% of the study population. A comparison of the common mutations in two neighboring countries are shown in Table 4. There were no statistically significant association with homozygous and compound heterozygous mutation carriage and presence of FMF symptoms in our study population (Figure 2). A comparison of the allele frequencies of MEFV mutations between healthy Turkish Cypriots and other populations from the region are demonstrated in Table 5. 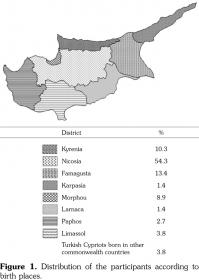 Figure 1. Distribution of the participants according to birth places.
× 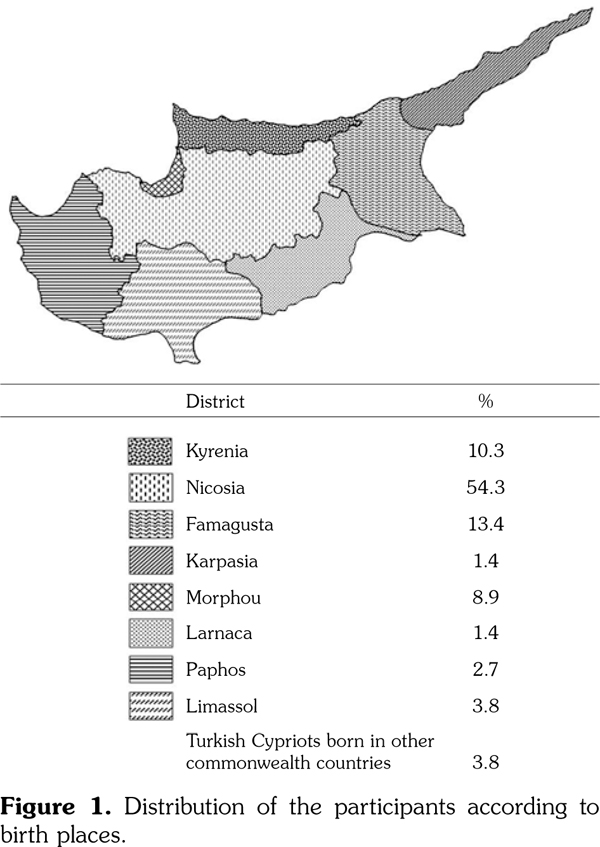 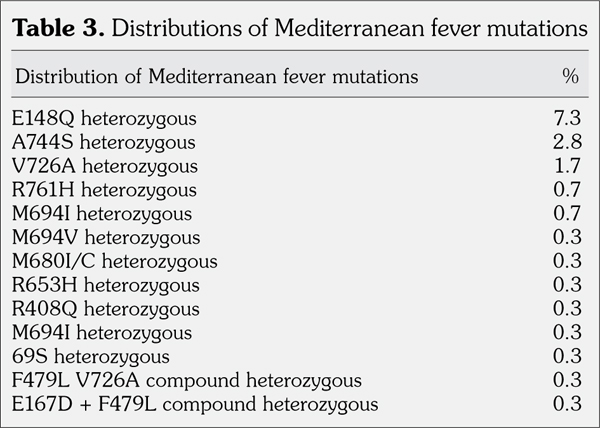 Table 4. The comparison of first three most common mutations of North Cyprus, Turkey and Israel
× 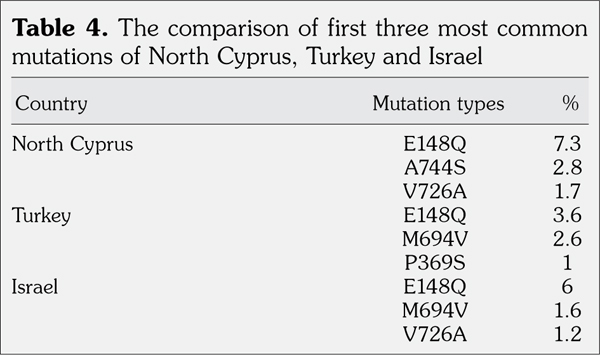 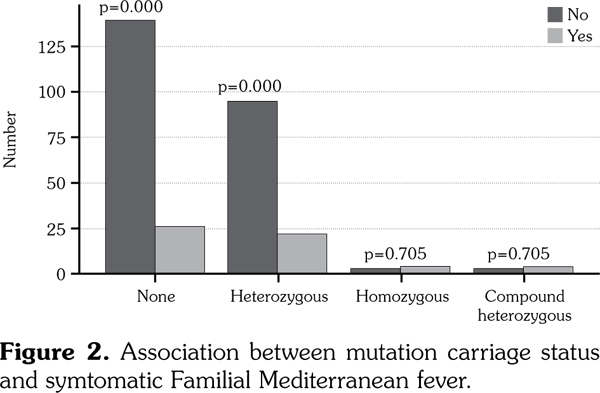 Cyprus has a rich history with many different ethnicities and cultures posing complicated genetic features. Turkish Cypriots are ethnic Turks living in or originating from Cyprus. Following the Ottoman conquest of the island in 1571, about 30,000 Turkish settlers were given land once they arrived in Cyprus.(8,9) In 1983, the Turkish Cypriots declared their own state in the north, the Turkish Republic of Northern Cyprus. There are limited studies conducted in the south part of the island on inherited diseases, particularly on thalassemia and two studies on MEFV mutation carriage in Greek Cypriot FMF patients.(6,7) Although there are approximately 220 recorded patients with end stage renal disease in North Cyprus, etiology is unknown in 29.8% of them.(10) Moreover, the incidence of FMF disease and amyloidosis in Turkish Cypriot population is unknown. We hypothesized that MEFV mutation carriage is frequent in North Cyprus and FMF might be one of the causes for end stage renal disease. This preliminary study may shed light on the frequency of MEFV mutation carriage rates and types of mutations in healthy Turkish Cypriot individuals, thereby improve the awareness of physicians for screening and diagnosing the disease.

Only a limited number of studies evaluated the prevalence of MEFV gene mutations in healthy populations.(11,12) Most studies were performed on clinically diagnosed FMF patients. Results of current study were therefore compared to the results of those two healthy population studies of Turkey and Israel. MEFV mutations of Greek Cypriots with FMF were also found in our study; however, the frequencies were not compared due to the lack of healthy population results. The most common mutations found in our study population were E148Q and A744S, with the rates of 7.3% and 2.8%, respectively. Unexpectedly, R202Q polymorphism was detected in 25.7% of the population which had been described in previous studies.(13,14) The most common mutation was E148Q in our study population. E148Q mutation had been reported to be the most common in Turkey and Israel as well, but with a higher frequency (7.3%) in Turkish Cypriots.(11,12) Another interesting finding of the current study was the second most common mutation of A744S, which has been detected rarely in other neighboring Mediterranean countries. The third most common mutation detected in Turkish Cypriot population was V726A, with a percentage of 1.7%, which was also higher than that in Turkey. Frequency of M694V mutation was reported to be 2.6% in Turkey.[(12)] This mutation is known as the highest risk factor for the development of amyloidosis. Carriage rate of this mutation was detected as 0.3% in Turkish Cypriot population in this study.

In conclusion, the current study demonstrated a high MEFV gene mutation carrier rate of 12.5% in the Turkish population of Cyprus. Although R202Q is currently accepted as a polymorphism, it was detected in 25.7% of the study population with a symptomatic patient demonstrating homozygous carriage of this polymorphism. Thus, we showed that MEFV gene mutation types and carrier rates in Turkish Cypriot population are different than other Mediterranean populations in the region. In addition, findings of our study suggest close follow-up of R202Q polymorphism carriers.