Behçet’s disease (BD) is a systemic vasculitis characterized by recurrent oral and genital ulcers and uveitis. Cutaneous, articular, neurological, pulmonary, and vascular manifestations have also been reported. BD has a worldwide distribution and is most commonly found in Turkey.(1-3) The exact prevalence of cardiovascular complications in these patients is widely variable.(4,5) Pericardial, myocardial, endocardial, and coronary artery complications were documented in patients with BD.(6,7) While some studies suggested that BD does not result in impaired left ventricular diastolic function (LVDF,8-10) others have documented impaired LVDF.(11-14) One study suggested that the incidence of left ventricular diastolic dysfunction (LVDD) in BD is related to the geographic distribution of patients.(12) In a previous study, the occurrence of intracardiac thrombi, aortic valve regurgitation, and pericardial effusion in Egyptian patients with BD were documented.(6) In this study, we aimed to evaluate LVDF in Egyptian patients with BD using variable echocardiographic parameters by combining both transmitral and tissue Doppler velocities to overcome the occasional false interpretation of preload dependent transmitral parameters and to detect the correlation between various left ventricular diastolic parameters and different disease manifestations.

Forty patients (35 males, 5 females; mean age 31±8 years; range 19 to 52 years) with BD diagnosed according to the International Study Group for Behçet’s disease(15) and 32 age-and sex- matched healthy controls (26 males, 6 females; mean age 28±6 years; range 19 to 60 years) were included in the study. The study was approved by the hospital ethics committee. A written informed consent was obtained from each subject. The study was conducted in accordance with the principles of the Declaration of Helsinki. Patients with diabetes mellitus, hypertension, rheumatic valvular lesions, congenital heart disease, and abnormal liver and kidney function tests were excluded. None of the patients or controls had symptoms suggestive of heart disease. The disease activity was assessed using the Behçet’s Disease Current Activity Form.(16) Scoring was based on history of variable clinical manifestations over four weeks prior to assessment and included the recording of oral and genital ulcers, fatigue, headache, skin lesions, joint affection, and gastrointestinal involvement. Each clinical variable, if present, was scored from 1 to 4 according to the duration from one to four weeks. The total score was the sum of individual scores (0-40). Active ocular, neurological, and vascular manifestations were recorded separately. Patients and controls were subjected to 12 leads electrocardiogram recording, conventional echocardiography, and tissue Doppler imaging (TDI).

The baseline demographic, clinical, and laboratory characteristics of the study population are shown in Table 1. Patients and controls were well balanced with respect to age, sex, smoking, and resting heart rate. Compared to the controls, patients with BD had higher erythrocyte sedimentation rate and white blood cell count. The mean duration of BD was 7.4±6 years (range, 1 to 30 years). During the course of the disease, ocular manifestations occurred in 26 patients in the form of posterior uveitis, retinal vasculitis, anterior uveitis, vitritis, and retinal vein occlusion. Skin manifestations were evident in 16 patients. Erythema nodosum was detected in 10 and pseudofolliculitis in seven patients. Four patients suffered from neurological complications. Vascular manifestations occurred in 10 patients in the form of deep vein thrombosis (n=9), superficial thrombophlebitis (n=4), and arterial aneurysms (n=2). During the study, the mean Behçet’s Disease Current Activity Form score for general disease activity was 2.15±2.6. Active eye and nervous system manifestations were present in 13 and two patients, respectively. Steroids were the most frequently prescribed drugs (36 patients, mean dose 22±2.1 mg/day) followed by azathioprine (n=14) and oral colchicine (n=4). Four patients received intravenous pulsed cyclophosphamide, three received intravenous infliximab infusions, and only one patient received cyclosporine. Two patients were on oral anticoagulants. 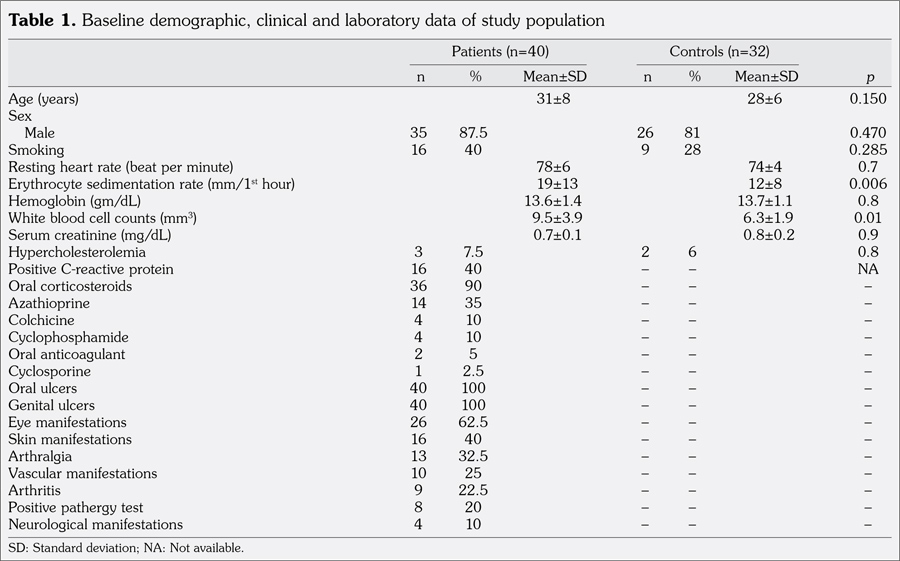 All participants had normal resting electrocardiographic findings. The cardiac valves were normal, both anatomically and physiologically. Compared to the controls, both left atrial as well as aortic root dimensions were normal in patients with BD (3.2±0.36 versus 3.1±0.29 cm, p=0.6 and 2.6±0.19 versus 2.7±0.26 cm, p=0.7, respectively). The interatrial septum was intact and of normal thickness and none of the examined patients had pericardial effusion or evidence of intracardiac masses. Left ventricular systolic and diastolic functions were comparable in both groups (Table 2). An E/A ratio <1 was detected in six patients with BD (15%); however, none of these patients showed other evidence of LVDD (Table 3). All had normal left atrial dimensions, normal IVRT, normal DT, and E/e’ ratio <8. Patients with transmitral E/A ratio <1 were significantly older (42±10 versus 30±6.5 years, respectively, p=<0.001) and had longer disease duration compared to the other patients (p=0.001). A tricuspid annular systolic wave velocity value <10 cm/second was detected in three patients with BD. These patients had a significantly higher Behçet’s Disease Current Activity Form score of general manifestations (p=0.04). The tricuspid annular plane systolic excursion and the right ventricular fractional area change were normal in all patients. Compared to patients without eye involvement, those with eye affection had higher E/e’ ratio (5.1±1.2 versus 4±1.9, p=0.03). Additionally, the transmitral E wave DT was significantly longer in patients with history of vascular involvement compared to those without previous vascular affection (179±18 versus 168±13 ms, respectively, p=0.05). A trend toward a lower transmitral E wave velocity in patients with vascular complications was also detected; however, this did not reach statistical significance (Table 4). 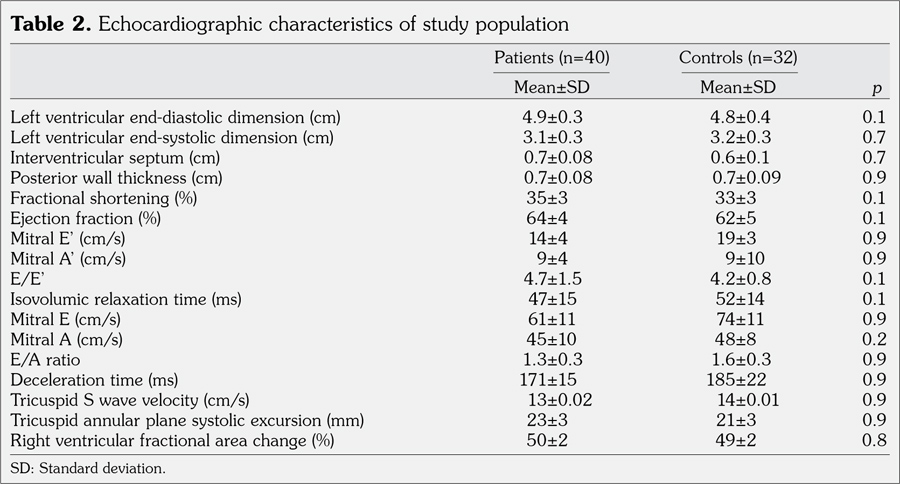 Table 4. Variable left ventricular diastolic parameters in patients with and without vascular complications
×

This study has shown that the resting left ventricular functions were unaffected in Egyptian patients with BD on regular medical treatment. Although 15% of our patients showed one abnormal echocardiographic diastolic parameter in the form of an E/A ratio <1, all the other measured parameters were normal. Factors other than diastolic dysfunction may alter the transmitral velocities, which are highly preload dependent parameters, making their sole use for the assessment of the LVDF doubtful especially in patients with normal left ventricular systolic function.(19) In the present study, abnormal E/A ratio was detected in six patients who were older, had higher sedimentation rate, and longer disease duration. All the other transmitral diastolic parameters as well as the TDI derived measurements were within normal values.

One important explanation for the occurrence of LVDD in patients with BD is the possible effect of proinflammatory cytokines. Interleukin-2, interleukin-6 and tumor necrosis factor-alpha are elevated in these patients and have been found to be associated with vascular thrombosis and impaired myocardial function.(21,22) In this study, assessment of these inflammatory markers was not performed. The erythrocyte sedimentation rate and the white blood cell count were significantly higher in patients with BD. C-reactive protein was positive in 40% of patients. The echocardiographic parameters in patients with positive and negative C-reactive protein were comparable.

In the literature, there are several contradictory published data concerning the impact of BD on LVDF. Using the conventional echocardiography, Gemici et al.(11) documented a higher prevalence of diastolic dysfunction in patients with BD compared to the control group. An abnormal E/A ratio was detected in 31% of their studied patients and in 10% of the control group. Unlike our findings, patients with BD had longer E wave DT and IVRT as compared to the controls. Baris et al.,(23) found a similar impairment of the LVDD in patients with BD. Assessment was made using several echocardiographic parameters including the transmitral flow velocities, TDI, and M-mode flow propagation velocity. Abnormal E/A ratio (E/A <1) was detected in 37.5% of patients who had additionally a significantly higher mitral septal annular a’ velocity compared to the controls. The other diastolic parameters were within normal range.(23) In a previous study, Heper et al.(12) studied the cardiac changes in 30 patients with BD using the conventional Doppler, electrocardiographic recordings, and transesophageal echocardiography. Patients with BD had longer E wave DT and IVRT compared to the controls. None of them, however, had abnormal E/A ratio. Compared to our findings, the incidence of mitral valve affection (prolapse and regurgitation) was high in this study.(12) Ikonomiditis et al.(13) have also reported an impaired LVDF in patients with BD as assessed by flow propagation velocity. E wave DT >190 ms predicted vascular complications in their study with 80% sensitivity and 71% specificity. They also found abnormal aortic elastic properties that correlated with the diastolic dysfunction and suggested the presence of a common pathophysiologic mechanism.(13) In the present study, the E wave DT was significantly longer in patients with vascular complications with a trend towards a lower transmitral E wave velocity; however, other left ventricular diastolic parameters did not significantly differ from those without vascular complications. Patients were younger with shorter disease duration compared to those studied by Ikonomiditis et al.(13) Also, the number of patients with vascular complications in our study was smaller and this may partially explain the difference of cardiac findings in both studies. Impaired LVDF in patients with BD was also documented using the lateral mitral annular velocities.(14)

Our study has some limitations. First, we did not assess LVDF invasively; therefore, we did not have a gold standard for the assessment of LVDF. Also, we did not measure the preload during the echocardiographic studies. The measurement of the circulating inflammatory markers could assist in the explanation of our findings.

In conclusion, our study has shown that LVDF is similar in Egyptian patients with BD and healthy controls in the absence of specific risk factors for development of diastolic dysfunction.