Effects of Smoking and HLA-B51 on Clinical Manifestations in Behçet’s Disease: Retrospective Analysis of 209 Patients in a Turkish Population

Behçet’s disease (BD) is an autoimmune inflammatory disorder characterized by recurrent oral aphthous ulcers, genital ulcers, and the involvement of musculoskeletal and other systems. Clinical features of BD are affected by both genetic and environmental factors and may vary between individuals and societies.(1,2)

Human leukocyte antigen (HLA)-B51 has been recognized as the strongest genetic predisposing factor for BD. In the literature, a relationship has been reported between HLA-B51 and different manifestations of BD which varies according to regions and ethnic backgrounds.(1,3,4)

Smoking which is the most widespread addiction in the world is an environmental factor associated with many diseases. Toxic components in the cigarette which stimulate vasospasm and platelet aggregation while decreasing the antioxidants in blood damage the vascular and immune systems.(2) There are different speculations about the relationship between BD and smoking. While some authors claim that smoking can activate, others claim that smoking cessation can activate several manifestations of BD. However; the general consensus is that smoking alleviates oral aphthous lesions but aggravates other manifestations of BD.(5-8)

We retrospectively reviewed the medical records of 209 patients with BD (119 males, 90 females; mean age 42.97±10.44 years; range 23 to 75 years) who were examined in Physical Medicine and Rehabilitation, Dermatology and Ophthalmology Department of Medical Faculty of Akdeniz University between January 2010 and October 2014. Patients older than 18 years of age and who met the 1990 International Study Group classification criteria for BD were included.(9) Patients who had other inflammatory diseases such as rheumatic diseases, infectious diseases (hepatitis B virus, hepatitis C virus, human immunodeficiency virus), and malignancy were excluded. Informed consents were obtained from patients in accordance with the Declaration of Helsinki.

Table 1. Demographic and clinical characteristics of 209 patients with Behçet’s disease
× 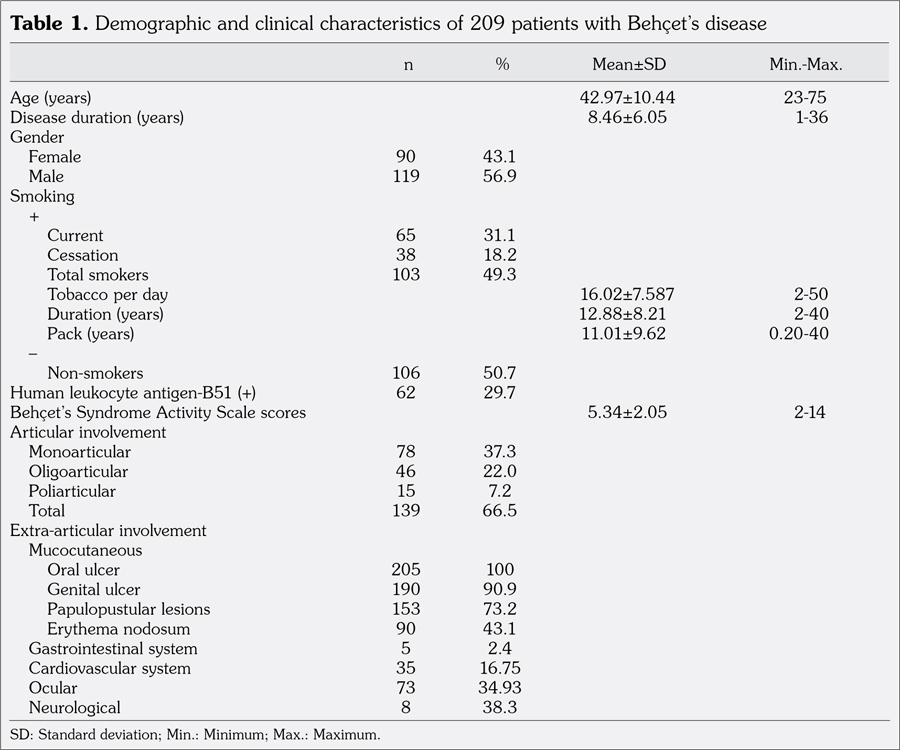 Table 2. Demographic and clinical characteristics of patients with Behçet’s disease according to sex
× 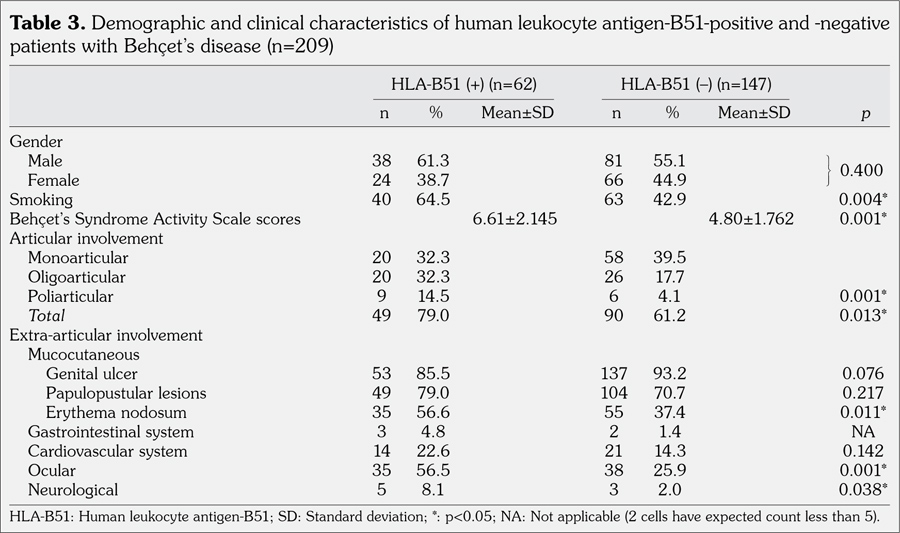 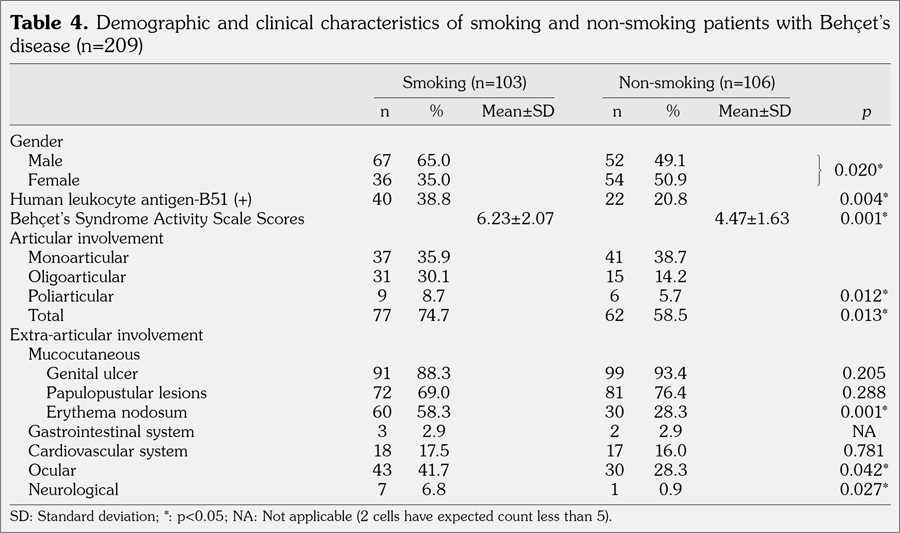 An investigation of the effect of consumed cigarette amount on articular and extra-articular involvement in BD demonstrated that the smoking pack/years did not affect articular, ocular or neurological involvement, or EN (p=0.434, p=0.371, p=0.476, p=0.839, respectively). Also, there was no correlation between these and BSAS scores. 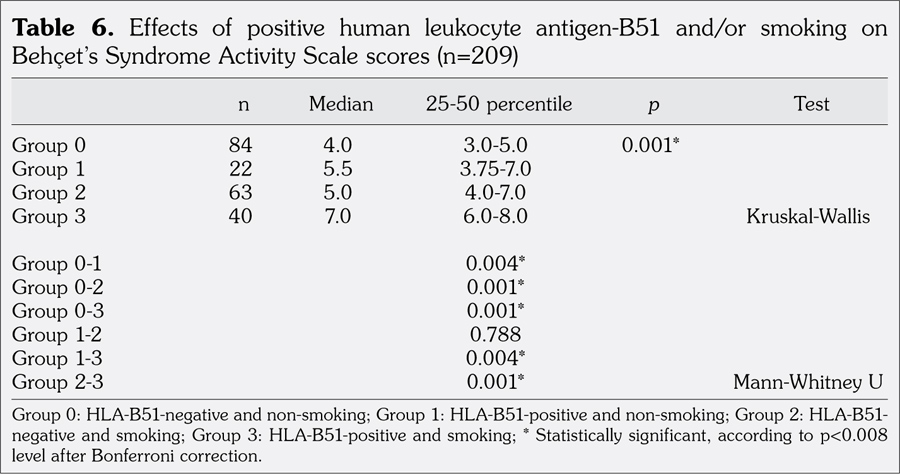 In the literature, an association between HLA-B51 with clinical involvement and prognosis of BD has been reported.(13-16) Results of these studies partially support our findings, but they have not examined whether patients smoke or not. Bilgin et al.(2) have also reported that cystoid macular edema among current smoking patients with BD was significantly higher than non- smoking patients, but smoking was inefficient on other ocular involvement. They have not examined HLA-B51. Their finding might seem to be partially different at first glance from our finding; however, they have accepted their patients who quit smoking in the not smoking category. Hirohata(17) reported that positive HLA- B51 rate was higher in patients with neurological involvement than patients without neurological involvement in BD.

According to our results, smoking is a risk factor for ocular and neurological involvements in patients with positive HLA-B51. Therefore, we may recommend that both HLA and smoking habits should be evaluated in patients with BD as well as studies on clinical findings of BD.

Another relationship referred to in the literature is between poor prognosis and severe complications of BD with male sex.(18) The results of some studies have shown that systemic involvements, disease severity and poor prognosis of BD were associated with male sex.(19,20) Moreover, Hirohata(17) has affirmed that HLA-B51, smoking, and male sex is strongly associated with chronic progressive BD with neurological involvement.

Male sex was not associated with BD manifestation in our study. Also, there was no significant difference between males and females in terms of HLA-B51. In studies associating systemic involvements and disease severity of BD with male sex, HLA-B51 frequency was generally higher in males than females. Besides, when taking into account that males generally smoke more than females, as in our study, this relationship may be due to direct smoking and/or indirect positive HLA-B51.

In their meta-analysis, Maldini et al.(21) have reported that HLA-B51 was significantly associated with male sex, and ocular and skin involvements including EN. In our study, EN seems to be associated with both HLA-B51 and smoking, but the influence factor was smoking on EN. The increased EN in patients with positive HLA-B51 may be due to the association of positive HLA-B51 with smoking. Also, the relationship between male sex with positive HLA-B51 and smoking may indicate that males smoke more because they have higher HLA-B51 frequency than females.

A relationship between smoking and severity of BD has been shown in the literature.(22) However, there are conflicting results about the relationship between HLA-B51 and smoking with severity of BD.(23-25) In our study, both smoking and HLA-B51 were found to be effective on BD. In addition, their concurrent presence was demonstrated to be more effective on BD activity scores.

The limitation of this study is that there was no control group. There is need for further studies in this regard.

In conclusion, we may say that smoking and HLA-B51 are influential factors on severity and systemic involvements of BD and there is a positive relationship between them. This relationship affects severity and same clinical manifestations of BD, sometimes leading to incorrect inferences. Therefore, we recommend that smoking and HLA-B51 should be considered simultaneously in BD with clarifications by further studies.