Systemic sclerosis (SSc) is a rare disorder with diverse manifestations, which usually presents with tightening and sclerosis of the skin. The manifestation ranges from localized to systemic manifestations, with different organ involvement, severity and prognosis. It is related with the presence of widespread tissue fibrosis. Among the important pathogenesis in the development of systemic sclerosis are immune activation leading to vascular damage, and excessive synthesis of extracellular matrix with deposition of increased amounts of structurally normal collagen in the tissues.(1) These events will hypothetically lead to the generation of a population of activated fibrogenic fibroblasts generally considered to be the effector cell in the disease.(2)

The prevalence rate for SSc varies, ranging from 4 to 489 cases per million individuals, with regional differences in incidence.(3-5) A study by Chiflot et.al.,(6) who reviewed 32 articles published from 1969 to 2006, found that the prevalence of SSc ranged from 7/million to 489/million and its incidence from 0.6/million/y to 122/million/y. SSc prevalence was higher in the USA (276/million in 1990) and Australia (233/million in 1999) than in Japan and Europe. A north-south gradient was also observed (France: 158/million in 2001 and England: 88/million in 2000). There was also spatiotemporal clustering in some regions (Ontario, Rome, near London’s airports), with an unusually high number of SSc cases from 3, 5, or even 1000 times greater than expected.(6)

This cross sectional study included 43 scleroderma patients (4 males, 39 females; mean age 52 years; range 42 to 59 years) who were on follow-up in Rheumatology clinic in Pusat Perubatan UKM Medical Centre and Hospital Selayang. Recruitment started from January 1st 2009 till May 31st 2009. Inclusion criteria were (i) patients aged 18 and above who fulfilled the diagnosis of scleroderma based on American College of Rheumatology/European League Against Rheumatism diagnosis criteria for scleroderma(7) and (ii) patients with a diagnosis of overlap syndrome with predominant scleroderma features. Patients who did not fulfill the diagnosis of scleroderma, who were aged below 18 years, and who were pregnant were excluded. Informed consents were obtained from all patients. The study was approved by the Research and Ethics Committee of the Faculty of Medicine, University Kebangsaan Malaysia, with the project code of FF-327-2009.

Patients’ demographic data and previous autoantibody screening as well as blood investigations were documented. The Health assessment questionnaire (HAQ) disability index was used to assess physical functioning in eight domains (dressing and grooming, arising, eating, walking, hygiene, reach, grip, and other activities). The HAQ-disability index was calculated by summing the highest score in each of the eight domains and dividing the sum by 8, giving a score between 0 and 3 on a continuous scale. Total scores of 0 to 1 represent mild to moderate disability, 1 to 2 represent moderate to severe disability, and 2 to 3 indicate severe to very severe disability. The validated Malay version of the HAQ-disability index were used for Malay patients.(8)

Clinical assessments were performed for six-minute walking test (6MWT) and modified Rodnan skin score. In the 6MWT, patients were required to walk on a flat, hard surface in a period of six minutes and the distance covered within that particular period were measured. The modified Rodnan skin score was based on a three point scale at specified areas on the body. The score measured skin thickening by palpation of the skin in 17 areas of the body (fingers, hands, forearms, arms, feet, legs, thighs, face, chest, and abdomen) and was scored on a scale of 0-3, where 0 is normal (no thickening), 1 represents mild thickening, 2 represents moderate thickening, and 3 indicates severe thickening. The total skin score can range from 0 (no thickening) to 51 (severe thickening in all 17 areas). Patients’ functional capacity was also assessed by the Borg scale.

The Borg scale was defined as follows: (score of 1 to 10)

“1” - Exercise is “very light” like walking slowly at your own pace for several minutes.

“3” - Exercise is not especially hard; it feels fine and it is no problem to continue.

“5” - Patient is tired, but not having great difficulties.

“10” - The exercise is as hard as most people have ever experienced.

High resolution computed tomography (HRCT) scan of the thorax at the end of inspiratory effort with the patient in the supine position and without intravenous contrast were done on all patients after recruitment. HRCT scan results were interpreted independently by radiologists in the absence of information on disease severity and activity.

In a large sample systemic sclerosis study by Steen and Medsger,(10) the rate of cardiopulmonary complications in systemic sclerosis was about 15%. The sample size was calculated with the help of a statistician using statistical software for population using the formula below: 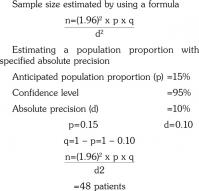 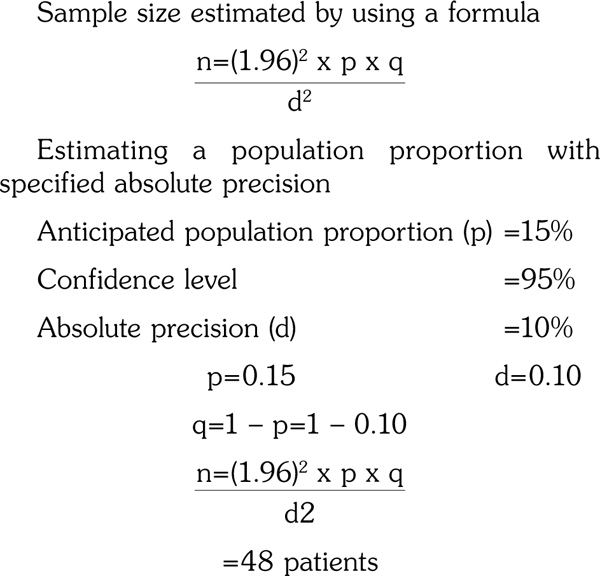 Patients were assessed with the EScSG disease activity scoring, which consisted of 10 variables with weights ranging from 0.5 to 2.0 and resulting in a total score ranging from 0 to 10. The disease was considered active if the sum of the scores of detected items was ≥3 (Table 1). 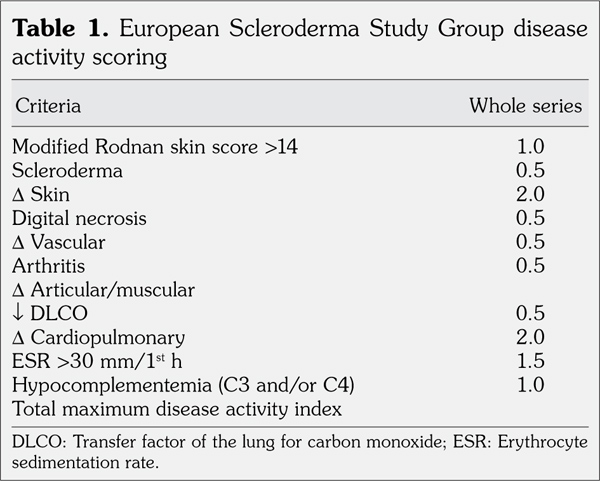 The baseline  and sociodemographic characteristics of the patients are shown in Table 2. Table 3 summarizes the clinical demographics of the patients. HRCT was performed in 39 patients with normal results in two patients. Table 4 summarizes the frequencies of the HRCT scan findings. Based on the echocardiographic findings, patients were further classified into two groups with or without pulmonary hypertension (Table 5). Table 6 shows lung function results of the patients (n=36). Other parameters including modified Rodnan skin score, 6MWT, Borg, HAQ-disability index, pain, and health scores are depicted in Table 7. 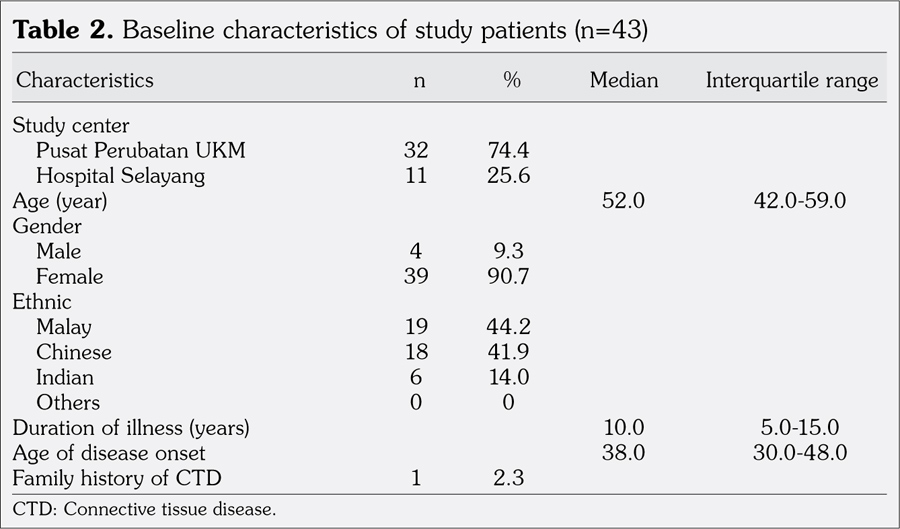 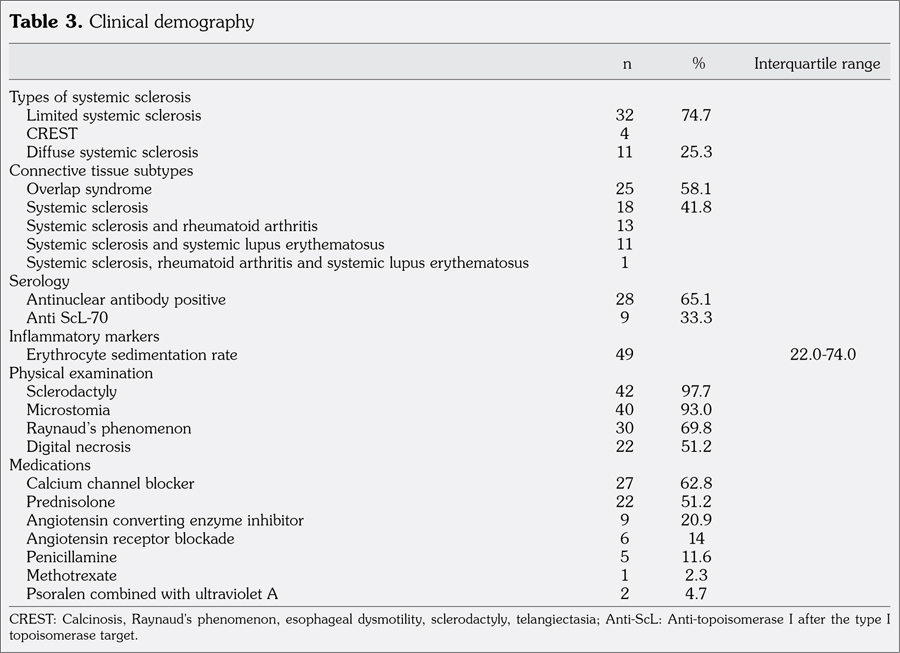 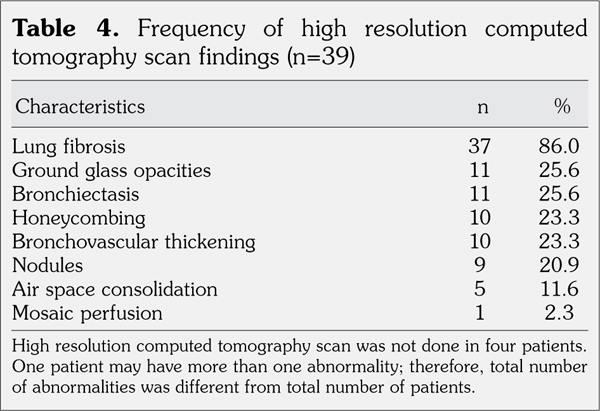 Based on the EScSG score, five patients (13.9%) who scored higher than 3.0 had active disease while 31 patients (86.1%) had inactive disease. There was no significant association between EScSG score and other clinical parameters such as types of scleroderma, pulmonary artery pressure, HAQ score, 6MWT, and areas of lung fibrosis (p>0.05).

In general, scleroderma affects primarily the female sex. This was also the same in our study, with 39 female patients (90.7%). The predominance of females has also been reported in two large, national cohorts of scleroderma in France and Germany.(11,12) The rate of female patients in both cohorts was 83.8%, with 5:1 ratio. Similar findings have been reported in two local retrospective studies by Pagalavan and Ong(13) and Teh et. al.(14) from Hospital Kuching. The median age of disease onset (39 years) in our study slightly differed from the onset described by previous studies. Hence, mean ages of onset were approximately 48 years and 44 years in two cohort studies by Hachulla et al.(12) and Hunzelmann et al.,(11) respectively. The durations of disease were wide-ranging in our study, extending from three to 25 years.

Most of the patients (67.4%) were unemployed due to their disease and limitation in working. The predominance of limited scleroderma was evident in this study, as shown in previous large cohort studies from France and Germany.(11,12) As with other previous studies, we observed that patients with diffuse scleroderma have more organ complications with poorer functional status.(15)

An analysis of patients’ treatments in this study revealed that the majority of patients were on calcium channel blockers and steroids, while no patient received cyclophosphamide, prostanoids or cyclosporin A. Based on our observation, these medications were not started because almost all of the patients presented with progressed disease with already established lung fibrosis and recurrent lung infections. In a double-blind, randomized, placebo-controlled trial by Tashkin et al.,(16) cyclophosphamide has been shown to improve interstitial lung disease in scleroderma. The current accepted treatment for pulmonary hypertension includes using bosentan which is a dual-endothelin receptor antagonist. Bosentan’s effects were shown in a double-blind, placebo controlled trial by Rubin et al.(17) and its long-term effects were studied by Denton et al.,(18) which also showed similar findings.

The most frequent pathological lung changes in this study were lung fibrosis (86.0%), followed by ground glass opacities and bronchiectatic changes (25.6%). These changes were also compatible with the Scleroderma Lung Study and non-specific interstitial pneumonia pattern reported in previous studies by Ooi et al.(19) and Fujita et al.(20) Systemic sclerosis with rheumatoid arthritis group may also predispose the patients to have lung changes, as rheumatoid arthritis itself is associated with interstitial lung disease as reported by Mohd Noor.(21) and also in a number of other studies.(22,23) It was also interesting to note in our study that pathological changes were present in HRCT scans of 12 patients (27.9%) without cardiorespiratory symptoms.

The subset of full lung function test in this study was only performed in 36 patients since, among the 43 recruited patients, seven were bedbound and severely debilitated, and unable to perform the full lung function test and the 6MWT. Of the 36 patients, the majority had normal results while 13 patients (36.1%) had restrictive pattern. The percentage of restrictive pattern was lower in this study than described by Spagnolatti et al.(24) and an older study by Owens et al.(25) (41% and 28%, respectively). In our patients, the low percentage (8.3%) of obstructive pattern may be related to the possibility of underlying undiagnosed obstructive lung disease. Both the median DLCO and FVC were low in our study, compared to previous studies where Hoyles et al.(26) reported a baseline

FVC of 82% and DLCO of 55%, and Hachulla et al.(12) reported a baseline DLCO of 56.2 to 72.6% predicted. This finding is directly related to the ability and the blowing technique of the patients. We observed that the low rates of DLCO and FVC in this study were due to the poor blowing ability of the patients, particularly in the group with more severe pulmonary involvement.

One of the main objectives of this study was to measure disease activity based on the EScSG scoring system. The majority of the patients had inactive disease based on the EScSG score measurement. Only five patients (13.9%) scored 3 and above, falling into the category of active disease. Most of these patients had high Rodnan skin scores, with reduced DLCO and high erythrocyte sedimentation rate. One patient had described a change in cardiopulmonary symptoms one month before. Based on Spearman’s test, there was a significant correlation between disease activity and FEV1/FVC percentage (r=346, p=0.042).

Although HAQ was initially developed for usage in rheumatoid arthritis, it has proven to be a useful assessment in a number of scleroderma studies, including the Scleroderma Lung Study.(15,28,29) In our study, the median HAQ score was 0.50 (interquartile range 0.25-0.87). Most of the patients (79.1%) had mild to moderate disability, which was different compared to the study of Clements et al.,(30) who reported a mean baseline score of 1.04±0.67, which correlates with moderate to severe disability. We demonstrated a significant correlation between HAQ and FEV1/FVC (%) (r=0.439, p=0.007), and also between HAQ and DLCO divided by alveolar volume (r= –0.347, p=0.045). In our study, the HAQ was also significantly correlated with pain, health, and total Rodnan skin scores. However, this was an expected finding since the factors mentioned were usually impaired when there is impaired functional status. For example, the higher the Rodnan skin score, the more severe disability the patients will have. The significant positive correlation of FEV1/FVC, on the other hand, cannot be clearly explained, unless if the higher FEV1/FVC translates into a more severe restrictive lung disease.

In conclusion, the majority of systemic sclerosis patients in our center was females, with an approximate onset age of 39 years. Almost all of the patients had lung fibrosis, with almost half having non-specific interstitial pneumonia pattern in HRCT. Most of the patients were stable. The patients also had normal to mild pulmonary hypertension, with under-averaged lung function test, especially in the DLCO and FVC readings. Furthermore, the cut-off and average 6MWT distances were significantly lower in our study. As with other studies, there was a significant correlation between FVC and pulmonary artery pressure.