Brucellosis is a zoonotic infection presenting with several systemic clinical symptoms. Cardiovascular involvement is observed in very rare of patients with brucellosis and the common involvement form is endocarditis. Heart failure is the prominent complication which may occur as a result of endocarditis. This type of infection may cause clinical symptoms including hematuria, proteinuria, and renal insufficiency. In this article, we report a patient with Brucella endocarditis resembling systemic vasculitis including hematuria, uremia, polyneuropathy, and epididymoorchitis findings.

Brucellosis is a zoonotic infection with a widely ranging global distribution and a high prevalence particularly in developing countries. It is frequently transmitted to humans via consumption of dairy products made from unpasteurized milk or direct contact with tissues of infected animals. Turkey is a country where brucellosis is endemic.(1) The most common species is Brucella melitensis. Clinical manifestations of Brucella infection have a wide spectrum of musculoskeletal, genitourinary, gastrointestinal, hematologic, nervous, skin/mucosal, and respiratory system complications.(2) Cardiac complications of brucellosis occur in less than 2% of patients and generally manifest in the form of endocarditis. Other possible manifestations include myocardial or pericardial involvement. Heart failure is a significant complication associated with endocarditis. Clinical pictures including heart failure, rhythm disturbances or acute pulmonary edema may occur as a result of cardiac involvement.(3) In this article, we present a patient of Brucella endocarditis resulting in manifestations resembling systemic vasculitis.

A 48-year-old male patient admitted to our clinic with skin rash in arms and legs, dark urine color, and generalized joint pain. His history revealed that he had rheumatic heart disease and underwent a coronary angiography 10 months ago due to chest pain. Angiography had showed normal coronary arteries along with grade 2-3 aortic insufficiency and mild-to-moderate mitral stenosis. He was offered cardiac valve replacement. Physical examination showed a body temperature of 38.5 °C, blood pressure of 120/80 mmHg, pulse of 99 bpm, and petechia in arms, legs and lower back region, and occasionally palpable purpura (Figure 1). The heart was rhythmic and grade 2-3/6 degree systolic murmur was present at apex and mitral focus. No rales or rhonchi were present in the lungs. Splenomegaly was detected during abdominal examination. Eye examination results were normal. Laboratory test results are shown in Table 1. Rheumatoid factor, antinuclear antibody, anti-double stranded DNA, anticardiolipin antibody, anti-neutrophil cytoplasmic antibodies, hepatitis B-C, human immunodeficiency virus, and Salmonella tests were negative. Complete urinalysis showed abundant red blood cells and leukocyte clusters, and 1+ proteinuria. Esbach’s test for 24-hour urine was negative. 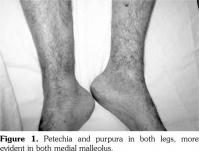 Figure 1. Petechia and purpura in both legs, more evident in both medial malleolus.
× 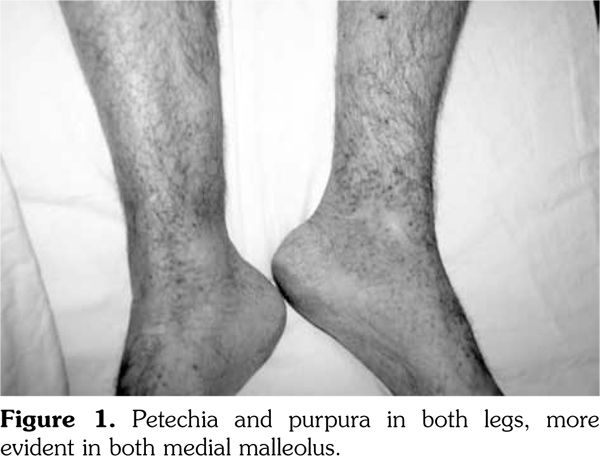 Table 1. Laboratory tests of the patient
× 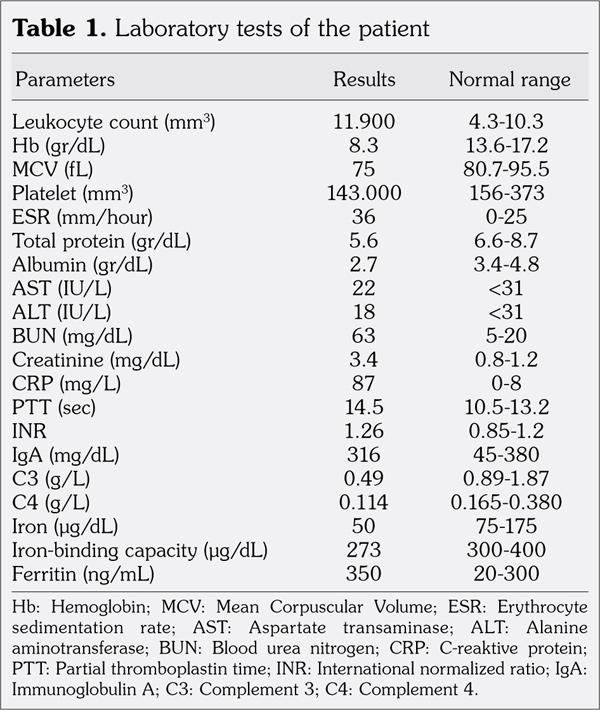 During the follow-up, the patient developed shortness of breath, orthopnea and paroxysmal nocturnal dyspnea. He was referred to the intensive care unit and followed for acute pulmonary edema (Figure 2). Nitroglycerine and furosemide infusions were started and his clinical symptoms improved. Laboratory work-up for anemia etiology revealed 1+ direct Coombs’ test, low iron level and iron-binding capacity and a high ferritin level (Table 1). Analysis of peripheral blood smear showed no signs of hemolysis. Patient’s findings were consistent with anemia of chronic illness. One unit of red blood cell transfusion was performed to increase hemoglobin level to 10 g/dL. A follow-up TEE was performed two weeks later to assess response to treatment. Vegetations were still present in aortic non-coronary (15x6 mm) and coronary (3x4 mm) valves. Surgical operation was preferred after consultation with Cardiovascular Surgery and Cardiology Departments. During the operation, aortic valve with vegetation was resected and replaced with a prosthetic valve (Figure 3). Additionally, mitral valve showing advanced insufficiency was resected and replaced with a prosthetic mitral valve. During the follow-up, the patient was heparinized and warfarin was initiated. Creatinine levels followed a stable level at about 2.5 mg/dL. He did not have fever during follow-up and his treatment for infective endocarditis was completed in six weeks. Renal biopsy was offered but the patient did not consent. 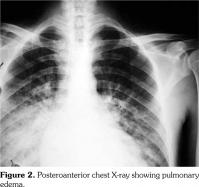 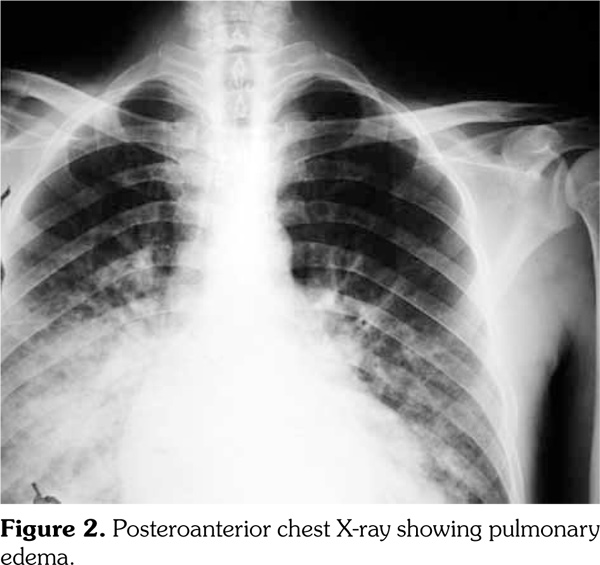 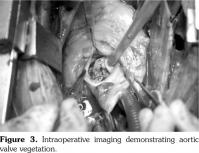 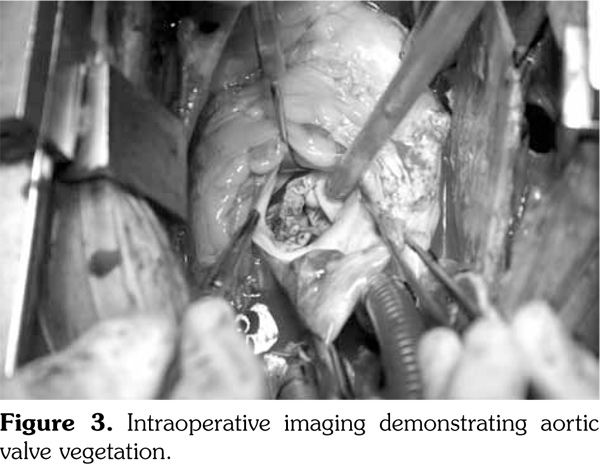 Brucella is diagnosed based on clinical signs and symptoms, including Brucella tube agglutination titration equal to or greater than 1/160 and/or growth of Brucella species in blood, bone marrow or other tissue cultures.(4)

Cutaneous symptoms of brucellosis occur in 5-10% of patients. Exogenous forms include contact dermatitis or primary abscess. Endogenous forms have been described as erythema nodosum, papules, petechia, purpura, vesicular lesions, psoriasiform and eczema lesions, urticaria-like lesions and impetiginous rashes.(5) Urogenital involvement is seen in 2-10% of brucellosis patients and clinically presents with unilateral epididymo-orchitis in male patients.(6) Our patient had epididymo-orchitis unilaterally on the right side. This condition was consistent with the literature.

Cardiac complications of brucellosis are not common. Less than 2% of patients with brucellosis shows cardiovascular involvement and the most common form is endocarditis.(2,7-9) Myocarditis and heart failure develop rarely.(10) Brucella pericarditis without endocarditis was reported in a limited number of patients.(11) Although the risk of developing endocarditis in brucellosis is low, deaths from brucellosis are majorly caused by endocarditis and associated development of congestive heart failure. Usually aortic valve is affected, requiring urgent surgical valve replacement.(12) Heart failure, rhythm disorders or acute pulmonary edema may occur in patients as a result of cardiac involvement. Aortic valve endocarditis may lead to acute myocardial infarction. The mechanism for cardiac damage is unclear but it may be related directly to the culprit microorganism or develop as a result of accumulating local immune complexes.(13)

Transesophageal echocardiography is required for patients who are suspected of having endocarditis due to new-onset cardiac murmur, valvular involvement, and unexplained fever. As in our patient, vegetations may not be apparent during TEE. Large vegetations in affected heart valves, ulceration and abscesses in myocardium, microabscesses in valves, and destruction and calcifications of perivalvular areas and valves may be observed during TEE.(14) These lesions may cause emboli.

Brucella species may invade kidney glomeruli, interstitium or renal vessels. Membranous glomerulopathy, immunoglobulin A nephropathy, mesengiocapillary glomerulonephritis, diffuse or focal proliferative mesengial glomerulonephritis, interstitial nephritis, renal and perinephric abscesses, and caseating granuloma have been reported.(16) Direct bacterial invasion, hypersensitivity reactions mediated by immune complex and direct cytokine-related injury have been suggested as pathogenic mechanisms for Brucella nephritis.(5) In our patient, renal failure might have resulted from immune complex glomerulonephritis associated with endocarditis or caused directly from Brucella infection. However, we were unable to reach a definitive conclusion in the absence of renal biopsy.

Endocarditis is an unlikely but lifethreatening complication of brucellosis. In general, a combination of surgery and medical therapy should be preferred for the treatment of endocarditis associated with brucellosis.(17) Conservative treatment with antibiotics was suggested as an adequate therapeutic approach, particularly in the patient subset without heart failure. Aminoglycoside combination is the most commonly preferred drug combination. Doxycycline plus rifampicin (77%) is the most widely used combination followed by doxycycline and rifampicin combined with streptomycin or gentamicin (9%).(4) Optimal duration of therapy is not clear but treatment may be given at least for six weeks and extended up to three months.(18) Quinolone was preferred in our patient since aminoglycosides are known to be nephrotoxic.