Objectives: This study aims to investigate the clinical impact of the R202Q (c.605G>A) alteration of Mediterranean fever (MEFV) gene in children with familial Mediterranean fever (FMF).
Patients and methods: Medical records of 115 patients (51 males, 64 females; mean age 6.6±3.8 years; range 8 months to 15.8 years) presenting with FMF pre-diagnosis were examined. Patients were classified into two groups based on number of mutated alleles (one-mutant allele and two mutant alleles), and these groups were classified into three subgroups (Group 1; subgroup 1: M694V/R202Q, subgroup 2: M694V/other, subgroup 3: other/other, and Group 2; subgroup 4: R202Q/-, subgroup 5: other/-, subgroup 6: -/-). Sex, age, abdominal pain, fever, arthritis or arthralgia, myalgia, erysipelas-like erythema, chest pain, amyloidosis, family history of FMF, and definitive FMF frequency were compared between groups.
Results: The most common allele alterations were the heterozygous R202Q alteration (27%) and the compound heterozygous mutation M694V/ R202Q (20.9%). The R202Q alteration of MEFV gene was detected in 76 patients (66%) (15 homozygous). There was non-M694V (E148Q, V726A) mutation in two of these patients. One (50%) of the patients with isolated R202Q homozygous alteration and six (19%) of the patients with isolated R202Q heterozygous alteration had definitive FMF. In the two-mutant allele group; abdominal pain, fever, arthritis/arthralgia, and definitive FMF frequency were lower in subgroup 1 than subgroup 2. There was no significant difference in clinical findings and definitive FMF frequency between subgroup 2 and subgroup 3. In the one-mutant allele group, clinical findings did not differ between subgroups.
Conclusion: R202Q alteration of the MEFV gene may lead to symptoms consistent with FMF. However, R202Q/M694V compound heterozygosity is more associated with mild phenotype than compound heterozygous mutation of M694V.

In 1997, the gene for FMF (MEFV) was mapped to chromosome 16.(5) The gene comprises 10 exons and encodes a 781-amino acid protein called marenostrin or pyrin.(6) Pyrin is only expressed in neutrophils and monocytes, and has an important role in the caspase-1 and interleukin-1b pathways. These pathways lead to apoptosis-associated protein expression and antiinflammatory activity.(7)

The association between the disease and many MEFV gene alterations has been clearly established. However, controversy exists regarding the role of some amino acid substitutions, particularly for R202Q in exon 2, where a G>A transition at nucleotide 605 results in glutamine (Q) substituting for arginine (R). R202Q was reported as a frequent polymorphism, and the G allele of the mutation was in linkage disequilibrium with M694V.(8) Nevertheless, previous studies demonstrated that the R202Q polymorphism might be a diseasecausing mutation.(10-12) However, the clinical significance of the R202Q alteration of MEFV gene has not been evaluated in children thus far. In this study, we aimed to investigate the clinical impact of the R202Q alteration of MEFV gene in children with FMF.

We retrospectively evaluated the medical records of 115 patients (51 males, 64 females; mean age 6.6±3.8 years; range 8 months to 15.8 years) who presented with a FMF pre-diagnosis in Pediatric Nephrology Department of Dokuz Eylul University Medical School between October 2010 and August 2013. The diagnosis of FMF was established according to the Tel-Hashomer criteria.(13) Major criteria are: (i) recurrent febrile episodes accompanied by peritonitis, pleuritis, and synovitis, (ii) amyloidosis of the AA type without predisposing disease, and (iii) response to colchicine treatment. Minor criteria are: (i) recurrent febrile episodes, (ii) erysipelas-like erythema, and (iii) FMF in a first-degree relative. Patients were divided into three groups according to the Tel-Hashomer criteria. These groups were defined as definitive FMF (patients with two major or one major plus two minor criteria), probable FMF (patients with one major plus one minor criteria), and suspicious FMF (patients with one major or one minor criteria).

Patients were also classified into two main groups regarding mutated alleles, either of which had three subgroups. The two-mutant allele group included subgroup 1 (M694V/R202Q), subgroup 2 (M694V/other) and subgroup 3 (other/other). The one-mutant allele (heterozygote) and non-mutant group included subgroup 4 (R202Q/-), subgroup 5 (other/-) and subgroup 6 (-/-). Statistical methods were used to compare demographic and clinical findings between subgroups within each group. These findings include sex, age at diagnosis and onset of symptoms (month), abdominal pain, fever, arthritis or arthralgia, myalgia, erysipelaslike erythema, chest pain, amyloidosis, family history of FMF, and definitive FMF.

Genomic DNA was isolated from peripheral leukocytes, using the QIAamp DNA Blood Mini Kit (Qiagen Inc., Valencia, CA, USA) according to the manufacturer’s instructions. A reverse hybridization, test strip-based assay (FMF Strip Assay; Vienna Lab Labodiagnostika, Vienna, Austria) was used according to the manufacturer’s instructions to test patients for the presence of mutations. The first step consisted of a multiplex polymerase chain reaction analysis using biotinylated primers to amplify the exons. The polymerase chain reaction products were then selectively hybridized to a test strip containing a parallel array of allele-specific oligonucleotide probes. Hybridizations were illuminated by the reaction of streptavidin-alkaline phosphatase and a color substrate.(14)

Statistical analysis
Results were given as mean ± standard deviation for age and as percentage for genotype frequencies. Subgroups within each group were compared in terms of demographic and clinical findings with the Student’s t, Mann-Whitney U, and Chi-square tests. Classified variables in subgroups with fewer than five patients were compared with Fisher’s exact test. A p value of <0.05 was considered statistically significant. SPSS software version 16.0 (SPSS Inc., Chicago, IL, USA) was used for statistical analysis.

The mean ages at diagnosis and onset of symptoms were 6.8±4.4 and 5.5±4.4 years for males and females, respectively. Of the 115 patients, 38 (33%) had definitive FMF (two of these had previously protracted febrile myalgia), 37 (32%) had probable FMF, and 35 (30.4%) had suspicious FMF according to the Tel-Hashomer criteria. Also, four patients (3.5%) had a history of prolonged abdominal pain due to Henoch-Schönlein purpura, and one (0.9%) patient had a history of ureter thickness. 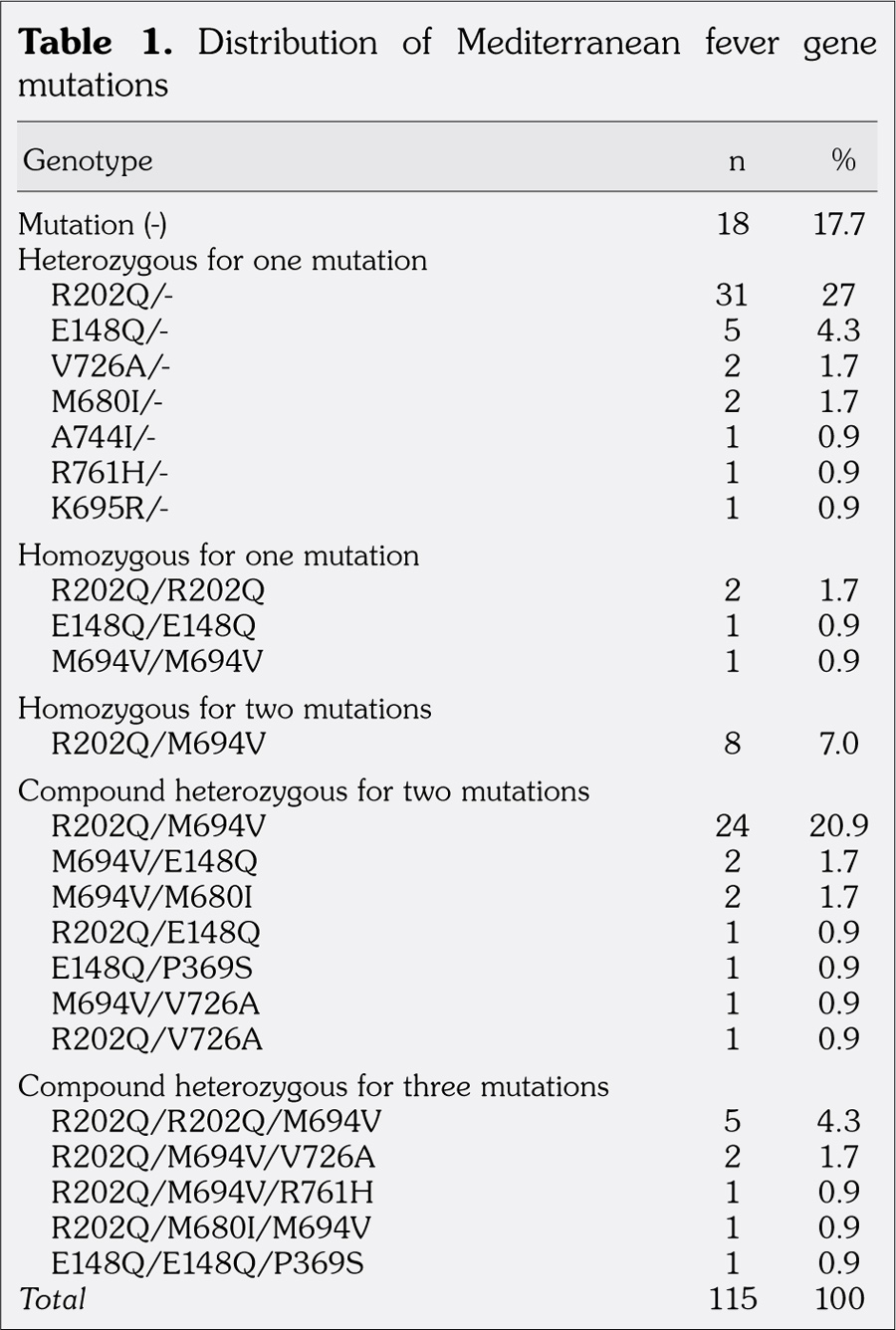 Table 3. Relationship between genotype and clinical findings in patients with two-allele change
×

Table 4. Relationship between genotype and clinical findings in patients with one-allele
× 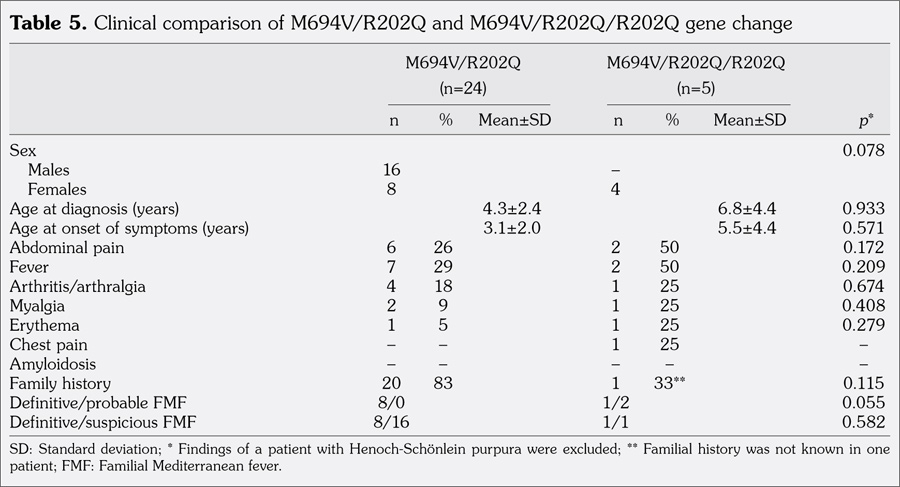 Debate still continues over the phenotype- R202Q alteration relationship in FMF. Some studies reported that R202Q is not associated with FMF and does not confer a significant risk of suffering the disease.(11,12) Ozturk et al.(10) suggested that R202Q does not contribute to FMF when it is in the heterozygous state. However, when combined with another disease-causing mutation, the clinical spectrum appears. Thus, these authors stated that R202Q might be a disease-causing mutation in at least some FMF patients. Yigit et al.(16) reported that there was a high association between the R202Q alteration and FMF, and that the R202Q alteration can be a cause of illness in homozygous form and should be included in routine molecular diagnosis of FMF patients. Similarly, we also thought that the R202Q alteration might lead to the disease in at least some FMF patients (if there is no another mutation).