Objectives: This study aims to investigate psoriatic arthritis (PsA) prevalence in patients with psoriasis (Ps), and compare clinical and laboratory characteristics of patients with or without PsA.
Patients and methods: A total of 126 patients (59 males, 67 females; mean age 45.6±13.8 years; range 18 to 82 years) with Ps who applied to Dermatology Outpatient Clinic between October 2009 and September 2010 were included in this study. The patients were screened for PsA using Classification of Psoriatic Arthritis criteria. The patients classified as PsA were grouped according to Moll and Wright criteria. Enthesopathy was evaluated according to Maastricht Ankylosing Spondylitis Enthesis score. Psoriasis Area and Severity Index scores were calculated by the same dermatologist.
Results: The prevalence of PsA was 25.4%. Ps duration was significantly longer in the group with PsA. The most common type was asymmetrical oligoarticular type (53.1%). Compared to previous studies, the rate of isolated spondyloarthropahty was higher in our study (21.9%). Nail involvement, Psoriasis Area and Severity Index score, mean erythrocyte sedimentation rate, and C-reactive protein values were significantly higher in the group with PsA.
Conclusion: High rate of isolated spondyloarthropahty in patients with PsA indicates that PsA must be kept in mind in the differential diagnosis of seronegative spondyloarthropathies. The fact that nail involvement is seen more frequently in patients with arthritis may assist in screening of PsA in patients with Ps. In addition, our results showing a higher probability of PsA development in patients with more severe skin lesions and a higher probability of arthritis development in patients with long lasting Ps may guide clinicians in terms of the probability of arthritis development in patients with Ps.

Psoriatic arthritis (PsA) is a chronic inflammatory disorder which develops in association with psoriasis in which rheumatoid factor (RF) is usually negative and there are no rheumatoid nodules. It is classified within the group of seronegative spondyloarthropathies.(1,2) Since PsA does not have a widely accepted classification and diagnostic criteria, it is hard to estimate its prevalence.(3) Classification of Psoriatic Arthritis (CASPAR) criteria was published in 2006.(1) To our knowledge, there are only a few prevalence or incidence studies which used CASPAR criteria in relevant English literature.(4-6) In this study, we aimed to investigate PsA prevalence in patients with psoriasis, and clinical and laboratory characteristics of the patients.

A total of 126 patients (59 males, 67 females; mean age 45.6±13.8 years; range 18 to 82 years) with psoriasis and older than 18 years of age who were admitted to Dermatology Outpatient Clinic of Ankara Numune Training and Research Hospital between October 2009 and September 2010 were included. The protocol of this study was approved by the Local Ethic Committee of Ankara Numune Training and Research Hospital. All of the participants were informed about treatment procedure and their signed informed consents were obtained. Patients were screened for PsA using CASPAR criteria.(7) The patients were also evaluated by a physiatrist of our clinic. Age, gender, psoriasis duration and arthritis duration of the patients as well as nail involvement and presence of dactylitis were noted. Peripheral joints and spine of the patients were examined in detail. Examination of 13 sensitive points was performed to diagnose enthesopathy according to Maastricht Ankylosing Spondylitis Enthesis Score.(8) PsA patients were grouped into five subtypes according to Moll and Wright criteria.(2) The Psoriasis Area and Severity Index (PASI) scores of the patients were calculated by the same dermatologist.(9,10) The patients were grouped according to their PASI scores as follows: <3: mild; 3-15: moderate; and >15: severe psoriasis. Blood samples were obtained from all patients to measure erythrocyte sedimentation rate (ESR), C-reactive protein (CRP), and RF using turbidimetric method. In those patients with inflammatory back pain, radiological assessments including X-ray or magnetic resonance imaging of sacroiliac joints were performed.

Statistical analysis
The statistical analysis of data was performed using SPSS for Windows version 11.5 package program (SPSS Inc., Chicago, IL, USA). The normality of continuous variables was analyzed using Shapiro Wilk test. The descriptive statistics were presented as mean ± standard deviation or median [minimum (min.)-maximum (max.)] for continuous variables, and as the number of the cases and (%) for categorical variables. The significance of difference between the means of the groups was investigated using Student’s t test while the significance of the difference between the medians was investigated using Mann-Whitney U test. Categorical variables were analyzed using Pearson’s Chi-square test. P<0.05 was considered as statistically significant.

Thirty-two patients (25.4%) had PsA according to CASPAR classification criteria.(1) The demographic characteristics of the patients are summarized in Table 1. The duration of psoriasis was longer in arthritis (+) group (p<0.05).

Table 1. Demographic characteristics of psoriasis patients with or without psoriatic arthritis
×

The onset time of psoriasis and PsA were investigated. Arthritis and psoriasis which started within one year was regarded as simultaneous onset. Arthritis started before psoriatic lesions in three (9.4%) of 32 patients, simultaneously with psoriasis in one patient (3.1%), and after psoriatic skin lesions in 28 patients (87.5%).

Table 2. Distribution of patients with psoriatic arthritis according to Moll and Wright criteria
× 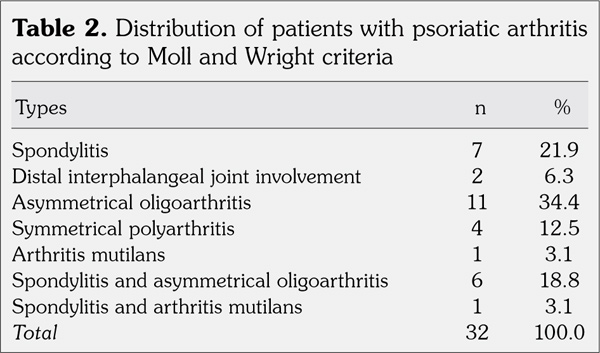 Table 3. Nail involvement, Psoriasis Area and Severity Index scores and laboratory results of patients with or without arthritis
×

The mean PASI score was higher in arthritis (+) group than in arthritis (-) group (p<0.05). No statistically significant difference was detected when the groups were compared according to the severity of the PASI scores (Table 3).

In several studies the prevalence of PsA in patients with psoriasis was 42% with Moll and Wright criteria,(11) 7.7%(12) and 9.1%(13) with European Spondylarthropathy Study Group classification criteria, and 13.8% with CASPAR.(4) Maldonado Ficco et al.(6) reported the prevalence of PsA according to CASPAR criteria, Assessment of SpondyloArthritis International Society peripheral and axial spondyloarthropahty criteria, and New York criteria for ankylosing spondylitis. The first 100 patients consecutively attending a psoriasis dermatology clinic were assessed. Seventeen patients had peripheral arthritis as follows: nine mono/oligoarticular and eight polyarthritis. Seventeen percent of patients fulfilled CASPAR and Assessment of SpondyloArthritis International Society peripheral criteria, 6% New York, and 5% Assessment of Spondylo Arthritis International Society axial criteria. Kumar et al.(5) reported the prevalence of PsA according to CASPAR criteria as 8.7% in 1,149 psoriasis patients. Various prevalence in the literature may be related to the number of the patients included in the studies and the differences of the classification criteria employed in the diagnosis of PsA. For instance, a study using Moll and Wright criteria(11) showed higher prevalence. This may be associated with regional difference or classification criteria. In addition, the differences in the patient populations included in the studies may play role on the outcomes. For example, studies including patients with severe symptoms reported high prevalence.

Although some studies indicate that males and females were affected equally by PsA,(4,13) some series report a female predominance(12) while others report a male predominance.(15) In our series, the frequency of arthritis was higher in males, although not statistically significant.

Our classification of PsA according to Moll and Wright criteria revealed that the oligoarticular type was more common(2,16,17) whereas other studies demonstrated that polyarticular type was the most common,(15) or found similar prevalence for oligoarthritis and polyarthritis.(18)

Enthesitis is another important finding of PsA. Some investigators have emphasized that enthesitis is the primary finding of PsA.(4,13,23) Plantar fascia and the insertion point of Achilles tendon to the heel are the most frequently involved sites.(24) Ibrahim et al.(4) detected enthesitis in 83.3% of their patients while another study from Iran(13) reported this value as 20.7%. We found enthesitis in 62.5% of patients with PsA, and enthesopathy was frequently seen in Achilles tendon.

High ESR and CRP are among the most characteristic laboratory abnormalities in patients with PsA.(21,26,27) In our study, we also detected significantly higher ESR and CRP levels in the group with PsA. Although patients with PsA are typically seronegative for RF, in a study RF was positive in 5-9% of the patients.(26) We did not find RF positivity in any of our PsA patients. In conclusion, the prevalence of PsA was determined as 25.4% in our study. According to Moll and Wright criteria, the most common type was asymmetrical oligoarticular type. Higher isolated spondylitis rate (22%) in our patients with PsA indicates that PsA must be kept in mind in the differential diagnosis of spondylitis, particularly ankylosing spondylitis. In addition, longer duration of psoriasis, and more common nail involvement and severe skin lesions in psoriasis may guide the clinician for the probability of PsA development in these patients.