Dermatomyositis is associated with cancer frequently. However, successive occurrence of two malignancies in one person is rare. In this article, we present a 71-year-old female patient who was diagnosed as dermatomyositis based on skin lesions, muscle weakness, elevated muscle enzymes, electromyography, and muscle biopsy. Two years later, the patient had an ulcer on the left nasolabial groove. A resection was performed after basal cell carcinoma was confirmed by tissue biopsy. Two years after resection, serum M protein, urinary l light chain, and neoplastic plasma cells infiltration in bone marrow biopsy of the patient were evaluated. Findings were compatible with the plasmacytic leukemia. Dermatomyositis patients may suffer from multiple tumors due to carcinogenic susceptibility. Therefore, physicians should continue to monitor dermatomyositis patients after the occurrence of the first tumor since they still have the possibility of developing another malignancy.

Dermatomyositis (DM) is an autoimmune inflammatory disease characterized by the association of progressive proximal muscle weakness and specific cutaneous signs, as well as multisystemic manifestations.(1) Although the association between DM and elevated risks of comorbid cancers has been studied extensively,(2) individuals with multiple malignancies associated with DM are rare. Some previous reports associated DM and two different types of malignancies in the same individual.(3-5) To the best of our knowledge, this is the first case of the metachronous basal-cell carcinoma of the nasolabial fold and plasma cell leukemia occurring in the same DM patient over a period of time.

A 71-year-old female patient presented with a four-month history of muscle weakness, such as difficulty in raising her hands over the level of her shoulders and walking up and down the stairs. Physical examination revealed periorbital violaceous erythema and Gottron’s papules on both elbows. Strength testing demonstrated a grade of 3/5 for the cervical muscle, upper and lower limbs. Laboratory tests showed elevated muscle enzymes with a creatine phosphokinase level of 2924 U/L (NR 20-140 U/L), alanine aminotransferase level of 186 U/L (NR <40 U/L), aspartate aminotransferase level of 151 U/L (NR <35 U/L), lactate dehydrogenase level of 834 U/L (NR 110-220 U/L), and hydroxybutyrate dehydrogenase level of 699 U/L (NR 72-182 U/L). Anti-nuclear antibody was positive at a titer of 1:1000, and anti-Jo-1 antibody was negative. Electromyography suggested myogenic damage. The muscle biopsy revealed a large number of inflammatory cells infiltrated along the vessels. Thus, the diagnosis of DM was established according to the Bohan and Peter's criteria.(6,7) The patient was initially treated with intravenous methylprednisolone 80 mg/d for seven days (then tapered gradually), followed by methotrexate 10 mg/week, and hydroxychloroquine 200 mg twice a day. The skin lesions resolved markedly and symptoms of muscle weakness relieved with treatment. At the time of discharge, she was kept on a maintenance oral dose of prednisone 7.5 mg daily, and her symptoms were alleviated during the follow-up visit.

Two years later, the patient presented with an ulcer on the left nasolabial groove. Skin biopsy of the affected tissue revealed damaged epidermis with basal-cell carcinoma infiltration in the dermis (Figure 1), suggesting basal-cell carcinoma for which she underwent a resection. There were no clinical or laboratory signs suggestive of DM activity. 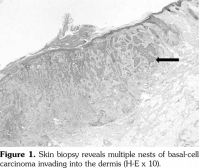 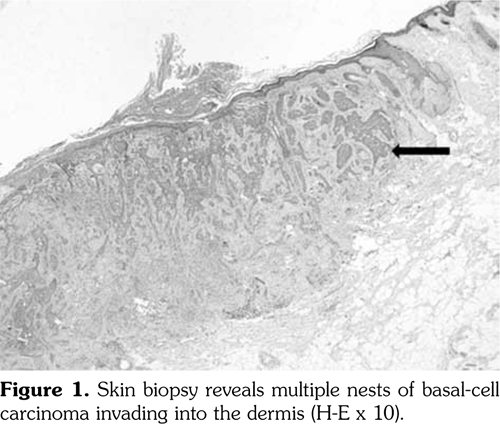 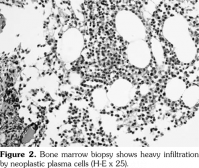 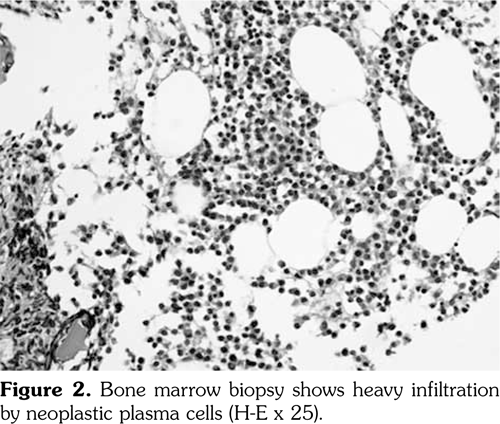 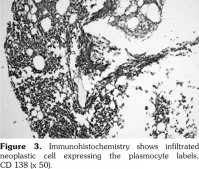 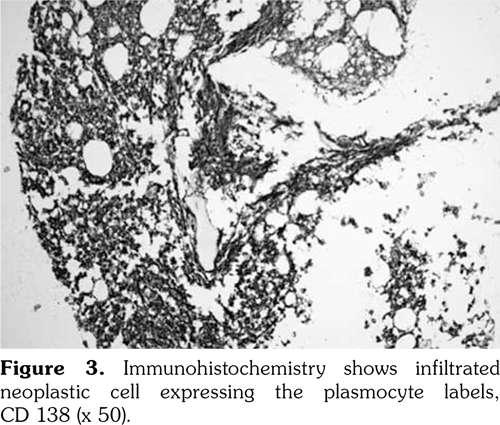 The association of neoplasms with DM is well documented. Dermatomyositis patients have a six to 10 folds increased possibility of developing cancer compared to the general population.(8) In Europe, the most relevant malignancies include cancers in the ovary, lung, pancreas, stomach, and urinary bladder, as well as hematologic cancers including non-Hodgkin's lymphoma and Hodgkin's lymphoma,(8,9) whereas breast, stomach and nasopharyngeal cancers are most common in Asia.(10,11) However, individuals with multiple malignancies associated with DM are rare. There have been some previous cases of DM associated with two different types of malignancies in the same individual.(3-5) Of these, combination of breast and ovarian cancers is reported commonly.(4,5) The literature shows that women with DM are more likely to suffer from multiple tumors than men.(3-5) Some unrevealed relationship may exist between the incidence of cancer and the abnormal immune system function in the female reproductive system. However, the combination of the cutaneous covering and the hematological system is rare.

Based on the epidemiological observations,(9) cancer-associated DM can be defined as a cancer occurring within three years from the diagnosis of DM. Studies commonly showed that cancerassociated DM is a paraneoplastic phenomenon. However, the etiology of DM in patients with cancer is poorly understood. It was demonstrated that antigenic myositis-specific autoantigens are expressed in both tumor cells and myoblasts, and then myositis-specific autoantigen is expressed in an initial tumor leading to the generation of both specific T and B cells targeting those antigens, and subsequently stimulate immune responses previously generated in the anti-tumor response.(12-15) These may explain the mechanism of the coexistence of DM and cancer.

Cancer risk in DM may be significantly high during the first year after the diagnosis of myositis.(9) Successful anti-cancer treatments may provide better outcomes in cancer-associated DM.(16) Thus, the determination of clinical and laboratory signs for association with malignancy are of great importance for the disease prognosis. In some studies, relatively high proportions of anti-155/140 antibodies were detected in cancer-associated DM patients, and these have an excellent positive predictive value(12,13,17) Therefore, introduction of a commercial kit for this antibody to be applied in clinical screening may be beneficial. It was also shown that anti-Jo-1 antibody and cancer-associated DM, or interstitial lung disease and cancerassociated DM appear mutually exclusive. Anti- Jo-1 antibody and interstitial lung disease are both associated with a specific human leukocyte antigen class II haplotype, and anti-155/140 antibody is associated with human leukocyte antigen-DQA1*0301,(17) suggesting that cancer risk in DM may be genetically determined. Thus DM patients may suffer multiple tumors due to genetic susceptibility. Therefore, we must closely follow-up any occurrence of other tumors by regular screening and long periods of follow-up after the development of the first tumor in DM patients. We should not ignore tumors from other systems such as skin and blood, even though most reported malignancies come from the female reproductive system.