Disease Activity and Related Variables in Patients with Psoriatic Arthritis

Objectives: This study aims to investigate the disease activity and related variables in patients with psoriatic arthritis (PsA).

Patients and methods: Fifty patients with PsA, who were diagnosed based on the Classification Criteria for Psoriatic Arthritis (CASPAR), were included. The patients were divided into five groups according to the Moll and Wright criteria. The disease was assessed using the Disease Activity Score for Reactive Arthritis (DAREA) index, the Disease Activity Score including 28 joints (DAS28), the Bath Ankylosing Spondylitis Disease Activity Index (BASDAI) and the Psoriasis Area and Severity Index (PASI). In the laboratory tests, the erythrocyte sedimentation rate (ESR), C-reactive protein (CRP) levels were determined, and a functional assessment was performed using the Health Assessment Questionnaire (HAQ). Pain was evaluated via the Visual Analog Scale for Pain (VAS-Pain), and the Patient Global Assessment (PaGA) and Physician Global Assessment (PhGA) results were recorded.

Results: The asymmetrical oligoarticular type of PsA was seen most often (n=28, 56%), with the distal interphalangeal predominant type of PsA (n=2, 4%) and arthritis mutilans (n=2) being the least frequent. There were statistically significant correlations between the DAREA score and the CRP and ESR levels as well as the VAS, PaGA, DAS28, and HAQ scores. The BASDAI scores had statistically significant relationships with the PaGA and PhGA in the group with spondylitis.

Conclusion: We determined that the DAREA, as a disease activity index, was well correlated with both the laboratory and clinical assessment findings in patients with PsA. Furthermore, the DAS28 is a helpful adjunctive measurement instrument for assessing PsA activity, and the BASDAI may prove to be more valuable for patients with spondylitis.

Psoriatic arthritis (PsA) is an inflammatory disease which accompanies psoriasis which is characterized by bone proliferation, osteolysis, and involvement of the enthesis regions.[1] Moll and Wright[2] described PsA as being milder than RA, but approximately 20% of patients with this disease develop destructive arthritis that causes disability and high mortality. Thus, PsA is not considered to be a mild disease, and the aim of treatment is remission. Until recently, there has not been much interest in assessment and outcome measurement with regard to PsA,[3] but with significant improvements in treatment, more attention is now being given to outcome measurements. For example, determining the symptoms and signs of PsA in the peripheral joints and skin, the quality of life (QoL), fatigue, and radiological damage is now deemed necessary. Most of these indices included in this study were not developed to assess PsA. Instead, they are commonly used for rheumatoid arthritis (RA), ankylosing spondylitis (AS), and psoriasis. However, several other indices have been especially developed for PsA, and the Group of Research and Assessment of Psoriasis and Psoriatic Arthritis (GRAPPA) and Outcome Measures in Rheumatology (OMERACT) have been working on developing conclusive indices for PsA.[4] In our study, we aimed to evaluate patients with various disease activity using a variety of functional assessment indices.

Fifty patients (26 females, 24 males; mean age 46.02±12.64 years; range 22 to 72) with PsA who were 18 years of age or older and were admitted to a physical medicine and rehabilitation follow-up outpatient clinic between October 2009 and September 2010 were included in this study. The diagnosis of PsA was made according to Classification Criteria for Psoriatic Arthitis (CASPAR).[5]

The patients' age, gender, duration of psoriasis, duration of PsA, nail involvement, and presence of dactylitis were noted, and their peripheral and axial joints were examined in detail. The patients with PsA were classified into five groups according to the Moll and Wright criteria.[2] In addition, any overlapping subgroups were also identified.

The Psoriasis Area and Severity Index (PASI)[6] scores of the patients were calculated by the same dermatologist. The Disease Activity Score including 28 joints (DAS28),[4] the Disease Activity Score for Reactive Arthritis (DAREA),[7] and the Bath Ankylosing Spondylitis Disease Activity Index (BASDAI)[8] indices were used to assess the disease activity of the patients, and the Health Assessment Questionnaire (HAQ)[9] was applied for functional assessment. The results of the visual analog scale for pain (VAS-pain) (0-100 mm), patient global assessment (PaGA) and physician global assessment (PhGA) were also recorded. Furthermore, blood samples were obtained from the patients to determine the erythrocyte sedimentation rate (ESR) and C-reactive protein (CRP) levels.

Statistical analysis of the data was performed using the SPSS for Windows version 11.5 software program (SPSS Inc., Chicago, IL, USA), and normality of the continuous variables was analyzed using the Shapiro-Wilk test. The descriptive statistics were presented as mean ± standard deviation (SD) or median (interquartile range) for the continuous variables and as the number of the cases and percentage for the categorical variables. The significance of difference between the medians of the groups was investigated using the Mann-Whitney U test when there were two independent groups, and when there were more than two groups, the significance of difference was investigated using the Kruskal-Wallis test. In addition, the correlation of the continuous variables was investigated using Spearman's correlation test. A p value of <0.05 was considered to be statistically significant.

The demographic characteristics of the patients are shown in Table 1. We found no significant differences related to gender and determined that the age at PsA onset of PsA was 35.8±10.1 years (range 21-60).

Table 1. Demographic characteristics of the patients with psoriatic arthritis
×

Our findings also revealed that the asymmetrical oligoarticular type of PsA occurred most often (n=28, 56%) while the distal interphalangeal (DIP) predominant type (n=2, 4%) and arthritis mutilans (n=2) were the least common. Some of the patients were included in more than one group (Table 2).

Table 2. Psoriatic arthritis patient distribution according to the Moll and Wright criteria
× 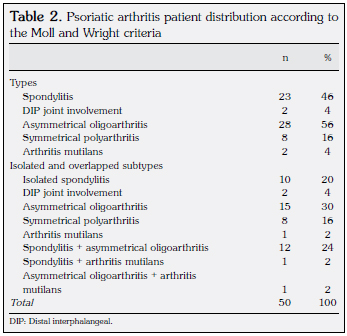 The onset times of psoriasis and arthritis were also determined. Simultaneous onset occurred if these two diseases started within the same one-year period. Arthritis started prior to the appearance of psoriatic lesions in four (8%) of the 50 patients, simultaneously with psoriasis in four others (8%), and after the psoriatic skin lesions in 42 patients (84%).

Furthermore, there was nail involvement in 38 patients (76%), and this was investigated in each clinical subgroup. Nail involvement occurred most often in those with the DIP predominant (100%) and arthritis mutilans (100%) subtypes of PsA while it was the least common in the symmetrical polyarthritis (50%) and spondylitis (62.5%) subtypes.

The results of the DAREA, DAS28, and BASDAI disease activity indices as well as the VASpain, PaGA, PhGA, and HAQ are summarized in Table 3.

Table 3. The assessment parameters of the patients with psoriatic athritis
×

Table 4. The relationship between ESR and CRP and disease activity in the patients with psoriatic arthritis
×

When the relationship between the DAREA and the DAS28, HAQ, VAS-pain, PaGA, and PhGA was investigated, we found that it was strongest between the DAREA and DAS28 scores. The DAREA scores also had a statistically significant correlation with the VAS-pain, PaGA, and HAQ (p<0.05), but the relationship with the PhGA did not reach statistical significance (Table 5). 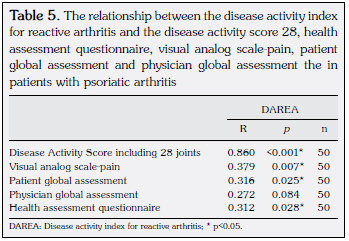 Additionally, we assessed the relationship between the BASDAI scores and the PaGA, PhGA, and HAQ and found a significant correlation between the PaGA and PhGA in the spondylitis group (p<0.025) (Table 6).

In our study, we determined that the mean age and duration of the arthritis symptoms of our patients were in agreement with other previously published studies. In addition, we found no significant differences according to gender,[10-12] and the most common type of PsA was the asymmetrical oligoarticular type, which also correlated with earlier research.[13-15]

The PASI was used to evaluate the extent and severity of the skin lesions, with erythema (redness), induration (thickness), and desquamation (scaling) of the lesions being assessed6 Some studies have reported more severe skin lesions in patients with PsA[15] while others have found no direct relationship between the severity and extensiveness of the skin lesions and arthritis symptoms.[16] Generally, most patients have mild/moderate skin lesions. However, Turkiewicz and Moreland5 noted that skin and arthritis symptoms were simultaneously exacerbated in 30-40% of the patients with PsA, and Schoels et al.[17] reported a mean PASI score of 9.3±10.1 In our study, the mean PASI score was lower at 5.22±6.10 Similar to the literature, the majority of our patients had mild or moderate disease.

The DAS28 is a disease activity index that was developed for patients with RA. Since the joints used in the calculation of DAS28 do not include the foot and DIP joints, a number of investigators have advocated that its use with PsA should be limited.[5] Schoels et al.[17] reported a significant improvement in the DAS28 scores of patients with PsA after treatment with disease-modifying antirheumatic drugs (DMARDs) and biological therapy. In our study, because the DAS28 scores were significantly correlated with the ESR and CRP levels as well as the VAS-pain and HAQ, we concluded that it was a helpful adjunctive tool that could be used to follow up PsA activity.

Recently, the DAREA index, which has been in use since 2000 for reactive arthritis, has been utilized to assess joint activation.[7] Nell- Duxneuner et al.[18] investigated the suitability of disease activity indices in patients with PsA and identified three major headings which contained five different components: (i) patient-related data (PaGA and patient pain assessment), (ii) jointrelated data (the number of tender and swollen joints), and (iii) acute phase reactants (CRP levels showed disease activity the best). These five components are reflected more thoroughly by the DAREA.[14] Schoels et al.[17] showed a significant correlation between the DAREA scores and the DAS28, VAS-pain, and HAQ scores along with the ESR and CRP levels, with significant improvement being seen in the DAREA scores in the treatment group. When the sensitivity of the alteration of the scores after the therapy was analyzed, no change was noted after 14 weeks in the placebo group, but there were variations in the other scores. This important finding indicates that the DAREA is a sensitive disease activity index for PsA. In addition, when radiological changes were evaluated at the end of 54th week in the same study, a significant correlation was shown between the DAREA scores and these changes. Schoels et al.[17] reported that the DAREA was a suitable index for PsA and that it could be used under the heading of Disease Activity Index for Psoriatic Arthritis (DAPSA). In our study, we concluded that the DAREA was an easily calculated index that was beneficial for following up disease activity.

The BASDAI is an index that has been frequently used in the follow-up of the disease activity in patients with AS, and it has been reported that these scores are higher for patients with PsA who have axial involvement.[19] In our study, the BASDAI showed a significant correlation with ESR, an acute phase reactant, in both the axial and peripheral PsA groups. In addition, in the spondylitis group, we identified statistically significant relationships between the BASDAI and PaGA and PhGA.

The most characteristic laboratory test abnormalities are a high ESR and an increase in CRP levels in patients with PsA, with a rise in ESR occurring in 40% of those with this disease. Furthermore, the ESR is known to be the inflammatory marker that correlates best with the clinical joint score.[1] Gladman et al.[14] analyzed 220 patients with PsA and found an ESR of >25 mm/h in 41% of the participants and reported that this was true for patients with both skin and joint disease activity. In addition, Moghaddassi et al.[12] reported an increased ESR in 79% of the patients and high CRP levels in 78.2%, and they believed that these findings were valuable prognostic signs. Günal et al.[20] also evaluated 86 patients with PsA in Turkey and reported an ESR of >30 mm/h in 40% of the study participants. In our study, we identified an ESR of ≥20 mm/h in 56% of the patients and a CRP level of ≥1 in 40%.