Mycobacterium tuberculosis infection is a complex, potentially life-threatening disease. Multiple hematological abnormalities may be seen in tuberculosis infection. However, Mycobacterium tuberculosis-associated hemophagocytic syndrome (HPS) in systemic lupus erythematosus (SLE) patients is quite rare. In this article, we report a 47-year-old female case of Mycobacterium tuberculosis-associated HPS in a patient with SLE. The patient had diffuse alveolar hemorrhage, myocarditis, and acute renal failure and required 17 sessions of plasma exchange and six sessions of cyclophosphamide. She also presented with fever, hypotension, desaturation, hepatosplenomegally, and pancytopenia which required intubation. Broncho-alveolar lavage revealed the diagnosis of Mycobacterium tuberculosis. The patient was initiated with rifampicin, ethambutol, pyrazinamide, moxifloxacin and amikacin. There was no indication of any SLE flare; however she continued to be febrile and pancytopenic. Her ferritin level was observed to be elevated. A bone marrow examination also showed hemophagocytosis plus multiple granulomas. Despite active treatment, the patient died due to septic shock and multi-organ failure. Mycobacterium tuberculosis has the potential to induce HPS in SLE patients; therefore, accurate diagnosis and aggressive therapy are critical. All SLE patients should be screened for latent tuberculosis and managed accordingly.

Hemophagocytic syndrome (HPS) is a hematological phenomenon characterized by the activation of either macrophages or histiocytes that contain prominent hemophagocytosis features in the bone marrow and other reticulo-endothelial systems. This leads to the phagocytosis of white blood cells, red blood cells, platelets, and their precursors. Infections, malignancies, autoimmune diseases, and a variety of other medical conditions can all lead to HPS.[1]

In systemic lupus erythematosus (SLE) patients, HPS associated with Mycobacterium tuberculosis has only been reported once.[2] Herein, we report a case of an SLE patient who developed HPS due to this type of bacteria.

A 47-year-old female was diagnosed with a case of SLE in November 2009 when she first presented with constitutional symptoms, a malar rash, and pancytopenia [white blood cell count 3x10^9 (3.9-11x10^9), hemoglobin 8.5 g/l (11-16 g/l), platelet 39x10^9 (150- 400x10^9)] along with positive antinuclear antibody (ANA), and anti-double-stranded DNA (anti-ds-DNA) antibodies. Her temperature was 36.9 °C, and her blood pressure was 74/45 mmHg. Furthermore, her heart rate was 108 beats/minute, and her respiratory rate was 20 breaths/minute. A chest examination revealed coarse crackles throughout both lungs as well as central and bilateral lung infiltration. The cardiac, abdominal, and neuromuscular exams were unremarkable. The patient was admitted to the intensive care unit (ICU) with diffuse alveolar hemorrhage and was started on pulse methylprednisolone, plasma exchange, and cyclophosphamide. She was also found to have severe mitral valve regurgitation, diffuse myocardial wall suppression, an ejection fraction of 25%, and acute renal failure and received a total of 17 sessions of plasma exchange, three cycles of cyclophosphamide, and several sessions of hemodialysis. After this treatment in December 2009, her ejection fraction improved to 55%, and her mitral valve regurgitation was found to be mild. She then underwent a renal biopsy that showed lupus nephritis class II (mesangial proliferation with mild-to-moderate fibrosis). She was also to complete a total of six cycles of cyclophosphamide every other week.

She was admitted to the ward after resuscitation. Thoracic computed tomography (CT) showed diffuse bilateral centrilobular lung nodules, paraaortic lymph node enlargement, and a small splenic lesion. By the next morning, the patient began to desaturate and required intubation. She was then moved to the ICU where she underwent a bronchoscopy, and a bronchoalveolar lavage sample was positive for acid-fast bacillus. The diagnosis of Mycobacterium tuberculosis infection was made, and she was started on rifampicin, ethambutol, pyrazinamide, moxifloxacin, and amikacin. All other cultures (blood and urine) were negative. Tests for brucella titer and hepatitis B and C were negative, and viral serology for cytomegalovirus (CMV), Epstein- Barr virus (EBV), and human immunodeficiency virus (HIV) also came back negative. Additionally, her fungal culture was also negative.

The patient, however, continued to be febrile and pancytopenic, and a suspicion of HPS was raised due to a ferritin level of 6.800 ug/l (normal range 15-150 ug/l). The patient underwent a bone marrow biopsy and aspiration which showed that her cellular marrow was infiltrated with abnormal histiocytes plus multiple granuloma consistent with hemophagocytosis (Figures 1 and 2). Therefore, HPS associated with Mycobacterium tuberculosis was diagnosed. Although she was on antituberculous medication and broadspectrum antibiotics, the patient developed septic shock and multi-organ failure which resulted in her death. 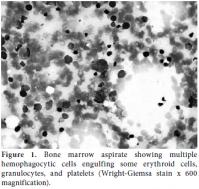 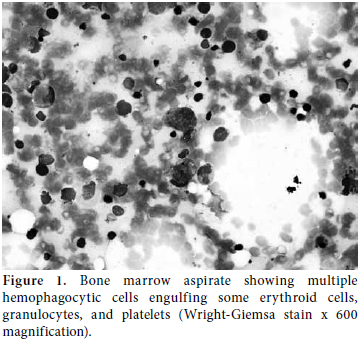 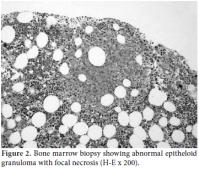 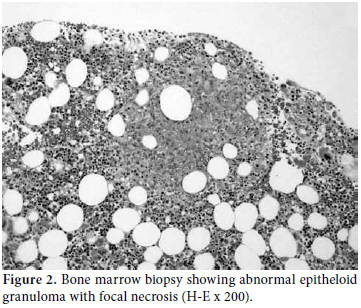 Although rare, HPS can occur in both active and inactive cases of SLE, but the majority take place during active SLE. Most instances of HPS in inactive SLE are thought to be related to immunosuppressive drugs,[3,4] and several viral, bacterial, fungal, and parasitic infections have also been found to be associated with HPS.

Hemophagocytic syndrome is a potentially life-threatening, aggressive disease that manifests clinically with fever, lymphadenopathy, jaundice, hepatosplenomegaly, and bleeding tendency. Laboratory tests may show pancytopenia, elevated ferritin and lactate dehydrogenase levels, and disseminated intravascular coagulopathy (DIC). Diagnosis is confirmed by a bone marrow biopsy that shows hemophagocytosis. The mechanism of HPS is not well known. The immune complex deposits hematopoietic cells on the bone marrow and produces autoantibodies. These autoantibodies react with the hematopoietic cells, and then the histiocytes phagocytose these cells. Interleukin-1 (IL-1), tissue necrosis factors-α (TNF-α) and interferon-γ (INF-γ) are reported to be important for histiocyte activation and the pathogenesis of HPS.[5,6] When HPS is a manifestation of SLE, it is treated with high-dose corticosteroids. In one patient with SLE, plasma exchange was used for treatment of HPS.[7] In addition, pathogen-directed therapy is indicated in HPS cases caused by infection.[4,5]

In patients with SLE, two cases of mycobacteria have been reported that were associated with HPS. The first case was a 15-year-old girl with SLE who was diagnosed with HPS associated with Mycobacterium avium complex (MAC). Her SLE was inactive, and she responded poorly to initial treatment with corticosteroids and intravenous immunoglobulins. However, following treatment with clarithromycin, amikacin, and ciprofloxacin, she improved gradually and was discharged.[5] The second case, a 36-year-old woman, was initially thought to have acute lupus hemophagocytic syndrome. However, increased levels of CRP led to further investigation. A Ziehl-Neelsen stain of the buffy coat showed acid-fast bacilli in the phagocytic cells, and the diagnosis of HPS associated with Mycobacterium tuberculosis was confirmed by blood cultures and polymerase chain reaction. She died despite active treatment.[2] Our case is the second case of HPS in inactive SLE caused by Mycobacterium tuberculosis. Our patient's characteristics were compared to the characteristics of the two patients in the preceding cases and are presented in Table 1.

Table 1. Review and comparison between the reported cases of hemophagocytic syndrome associated with Mycobacterium tuberculosis in systemic lupus erythematosus patients
× 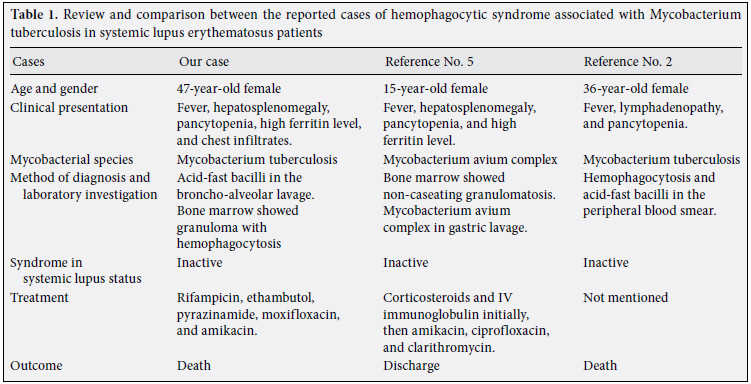 As our case and a review of the literature demonstrate, HPS in SLE is an aggressive disease regarding both flare-ups and conditions related to infection. Mycobacterium tuberculosis should be considered in the differential diagnosis of the organisms that can cause HPS in SLE. We recommend that any SLE patient should be examined for the presence of latent Mycobacterium tuberculosis prior to initiating immunosuppressive therapy, especially in endemic areas. In one study, it was found that the use of isoniazid prophylaxis in such patients decreased the incidence of tuberculosis from 11% to2 %.[8] The published literature suggests that T-cell interferon-gamma release assays (IGRAs) have a better diagnostic sensitivity to diagnose latent Mycobacterium tuberculosis than tuberculin skin testing (TST) in patients with immune-mediated inflammatory diseases.[9] Once confirmed, accurate treatment should be strongly considered.