Melkersson-Rosenthal Syndrome in a Patient with Systemic Lupus Erythematosus: A Rare Comorbidity

Melkersson-Rosenthal syndrome (MRS) is a rare granulomatous disease characterized by recurrent orofacial edema, facial palsy, and a fissured tongue. In this article, we report a 23-year-old female case with recurrent peripheral facial palsy, mild orofacial edema, and a fissured tongue. She had spots in her feet with a history of oral aphthous ulcers and experienced a relapse once a year. The neuroimaging results were normal, however the laboratory examination indicated systemic lupus erythematosus (SLE). This rare case is presented to emphasize the complete triad of MRS concomitantly occurring with SLE in this patient.

Melkersson-Rosenthal syndrome (MRS) is a rare granulomatous disease characterized by recurrent, relapsing orofacial edema, facial palsy, and a fissured tongue. Furrowing of the tongue may also be seen, but it is less common. Since the complete triad is very rare, it usually presents with monosymptomatic or sequential involvement.[1,2] It was first described in 1928 by Melkersson as a syndrome of recurrent facial palsy and edema, and a fissured tongue, the third feature of this syndrome, was added by Rosenthal in 1931.[1] While a classic triad is possible, the presence of two manifestations or one manifestation along with perilymphatic or intralymphatic granulomatous inflammation is sufficient to support a diagnosis.[2]

While MRS has a granulomatous pathology, it has an unknown etiology, with genetic and acquired factors also contributing to the disease.[1,3] A differential diagnosis of MRS includes allergic angioedema, bacterial, viral or filarial infections, autoimmunological inflammation in the course of systemic lupus erythematosus (SLE), and dermatomyositis, but other less common symptoms may also be found.[4]

Systemic lupus erythematosus is a chronic autoimmune disorder with an unclear etiology. Complex factors such as genetic, environmental and hormonal circumstances are supposed to interfere with the etiology of this disease, and pathogenic antibodies and immune complex accumulations causing tissue damage play an important role in the pathogenesis of SLE.[5,6]

There have been only a few reports of discoid lupus erythematosus (DLE) in patients with MRS.[7-9] Furthermore, data about the comorbidity and/or the relationship of the disease with SLE is rare.[4] Herein we present a rare case of the MRS triad in a SLE patient.

A 23-year-old, right-handed female was admitted to our outpatient neurology clinic with recurrent peripheral facial palsy that took place three times a year. She was suffering from hair loss and had a history of oral aphthous ulcers that relapsed once a year. She had no remarkable family history of any rheumatoid disease. On physical examination, her general condition was good, and she had no oral or genital aphthous ulcers or lesions. There were bilateral, macular, hyperpigmented annular plaques located approximately 10 cm proximal to the distal leg, laterally. She had mild orofacial edema at the left side of the upper lip and malar region beginning from the upper eyelid. In addition, she had a furrowed and fissured tongue (Figure 1). Her neurological examination was normal except for left peripheral facial palsy with orofacial edema (Figure 2). Cranial magnetic resonance imaging (MRI) and angiography were normal. Laboratory investigations, including complete blood count (CBC), liver and kidney thyroid function tests, an electrolytes test, and thyroid function tests, showed no abnormalites, and serum vitamin B12, IgE and amylase levels were normal. The antinuclear antibody (ANA) test showed a homogenous pattern, and three were positive in the nucleolar pattern. Moreover, an extractable nuclear antigens (ENA) profile was nucleosome 1 positive. Tests for anti-neutrophil cytoplasmic antibody (ANCA) and anti-cardiolipin antibodies (IgM and IgG) with anti-DNA antibodies were negative. Components of the complement cascade, such as C4, were decreased (13.50; normal range 15-50), whereas C3 was normal (119; normal range 85-200). There were heterozygote mutations in Factor V Leiden, plasminogen activator inhibitor-1 (PAI-1) 5G-4G, and angiotensin-converting enzyme (ACE) insertion/deletion (I/D). We treated the patient with 1 mg/kg/day oral prednisolone at 60 mg/day for five days, which was reduced to 50 mg/day for five additional days. Thereafter the dosage was reduced by 10 mg per week. Currently, the patient is still under the care of our outpatient neurology clinic as she is being monitored via follow-up visits. 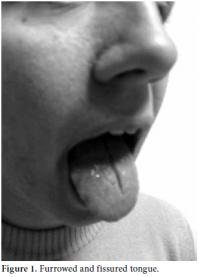 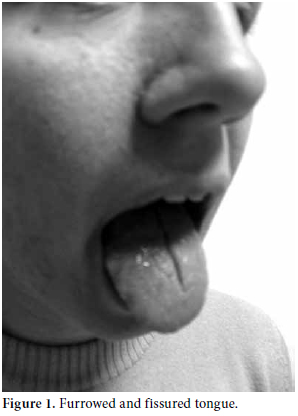 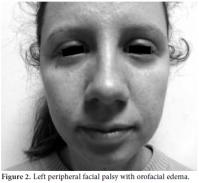 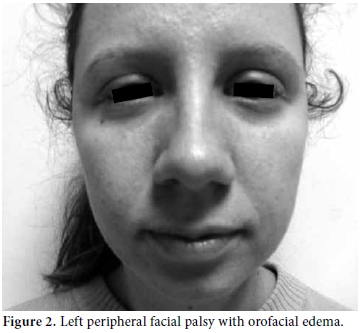 Melkersson-Rosenthal syndrome is a systemic neurological granulomatous disease which is relatively rare and has an unknown etiology. The reported incidence of MRS is 0.08%, and it is usually seen in adolescence.[7] However, most studies show an older distribution in early adulthood with a 2:1 female preponderance.[10] The pathogenesis of the disease is still unknown; however, there are several factors which are thought to play a role in the disease process, for example heredity, chronic infection, allergies, and hypersensitivity to bacteria.[11] Although both genetic and acquired factors have been implicated, the exact etiology of MRS remains unclear. It has been suggested that genetic predisposition is involved in the pathogenesis of the disease because some cases have occurred within the same family.[12] Subsequently, a gene defect at chromosome 9 p11 has been discovered to have a relationship with MRS, so evidence exists for autosomal dominant inheritance. On the other hand, genetic factors do not account for all cases, and infections (viral and bacterial), autoimmunity, and hypersensitivity all have been implicated as etiologic factors with reasonable evidence.[12]

While there are three features that form the classic triad of MRS, they are rarely encountered at the time of presentation, making the diagnosis challenging.[12,13] Our case had all three features of the disease: recurrent peripheral facial palsy, a furrowed tongue, and orofacial edema.[12] Additionally, she had a comorbidity with SLE.

Systemic lupus erythematosus is a common, chronic, inflammatory autoimmune disease that it is diagnosed based on the American College of Rheumatology (ACR) criteria. Our patient had been diagnosed with SLE according to these criteria five years prior to her arrival at our clinic.[14] As we learned from her medical records, she had complaints of fatigue, fever, and weight loss, and her initial examination had revealed a malar rash, photosensitivity, and oral aphthous ulcers with an abnormal antibody to the native DNA (Anti-ds-DNA) titer. In a recent examination, our patient had photosensitivity, oral aphthous ulcers, and serological findings such as positive ANA, anti dsDNA, and hypocomplementemia which made us consider the attack as lupus activation.

A few reports exist which show comorbidity of DLE with MRS,[7-9] but there are no reports indicating a correlation between SLE and MRS. There is limited literature attesting to the fact that there may be a genetic predisposition for MRS or that it can present as a symptom of Crohn's disease or sarcoidosis,[13] but there is no information about how the disease interferes with SLE.

Melkersson-Rosenthal syndrome is characterized by a triad of symptoms: orofacial edema, peripheral facial paralysis, and lingua plicata, but all three features of the disease are rarely encountered at the time of presentation, making diagnosis more difficult.[4,13]

Angioedema, acute allergic reaction, and parotitis should be considered in the differential diagnosis,[2] but in our case, the IgE levels and amylase levels were normal, and the patient's history and physical examination revealed no correlation with these disorders.

We presented this rare case of MRS with a complete triad in order to report the comorbidity of lupus with the disease, an uncommon occurrence in the literature, Further research on MRS is needed to provide more data on this uncommon disease.