Objectives: This study aims to compare the levels of serum anti-cyclic citrullinated peptide (anti-CCP) antibodies in patients with juvenile idiopathic arthritis (JIA) and adult rheumatoid arthritis (RA) and to discuss the clinical value of these antibodies in the diagnosis of JIA.

Juvenile idiopathic arthritis (JIA) is a common systemic rheumatic disease among children. Its dominant feature is chronic synovitis accompanied by different degrees of involvement of other organs, but it does not affect bones and joints. Juvenile idiopathic arthritis is an autoimmune disease which causes the highest disability rate among children, yet its etiology still remains unknown.[1] It can be classified into different subtypes, such as systemic JIA, polyarticular JIA , and oligoarticular JIA, according to its onset characteristics and early six-month course.[2] Rheumatoid arthritis (RA) is one of the most common autoimmune diseases among adults, with an incidence rate of 1-2%.[3] Although rheumatoid factor (RF) is one of the serological markers of RA, neither its sensitivity nor its specificity in diagnosis of JIA is high[4,5] since its positive expression can only be detected by latex agglutination in 5-10% of children with JIA. For example, among children with polyarticular JIA, positive RF can only be detected in those with a late disease onset and in those whose joints are severely destructed.[2] At present, the diagnosis of JIA primarily depends on the clinical and radiological manifestations of JIA due to the lack of a specific and sensitive serological marker. Anti-cyclic citrullinated peptide (anti-CCP) antibodies have only been recently discovered to have a diagnostic value for RA, with a specificity of 96-100%[6] and a sensitivity of 40-85%.[7,8] However, their diagnostic value for JIA is still controversial. Some scholars have reported that their sensitivity in the diagnosis of JIA was 4.4-15%,[9,10] but others have determined that it was 16.7-30.0%,[11,12] or even as high as 58.5%.[13] An early diagnosis of JIA along with drug intervention treatment that occurs as early as possible can better control the disease's progression, relieve joint destruction, and improve a patient's prognosis.

In our study, the serum anti-CCP antibodies in children with JIA and patients with RA were detected using enzyme-linked immunosorbent assays (ELISA), and these were then compared. This data combined with the clinical and radiological data were analyzed to explore the diagnostic value of anti-CCP antibodies for JIA.

Table 1. Demographic data of the subjects
×

In the RA group, the average disease course was 14.06 months (ranging from three to 120 months). Positive RF was detected in 11 of the patients, and imaging showed that joint involvement occurred in seven cases, including five with bone destruction and two with cervical joint dislocation.

Blood sample collection
Two milliliters of peripheral venous blood was extracted from the empty stomachs of the participants in the morning. After centrifugation, the serum was kept in a refrigerator at -20 ∞C, and the samples were not thawed until analysis.

Anti-CCP antibody detection
The ELISA method was used to test the anti- CCP antibodies, and the procedures were performed according to the instructions indicated in the kits that were utilized (Axis-Shield, Diagnostics Limited, Dundee, Scotland; Euroimmun, Lübeck, Germany; and Shanghai Fuchun Jianye (group) Limited Company, Shanghai, China). The results were obtained based on the standard curves for determination of positivity or negativity of the serum samples.

Clinical data collection
The clinical data of the patients with JIA, including the course of the disease, symptoms, vital signs, and laboratory examination indices such as RF and radiologic data, was carefully collected, Statistical analysis.

The data was analyzed using the Statistical Package for Social Sciences (SPSS Inc., Chicago, Illinois, USA) version 13.0 software program for Windows. Statistical descriptions were given to the measurement data, Student's t-test was used for comparisons between sample means, and a chi-square test was carried out for enumeration data. A p value of <0.05 was considered statistically significant. 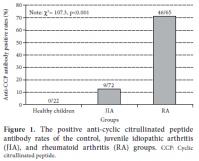 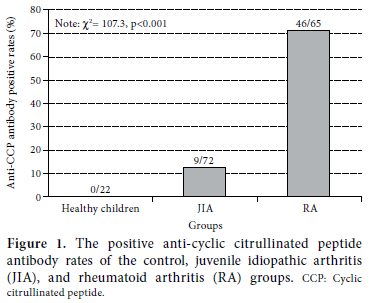 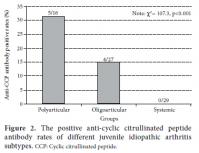 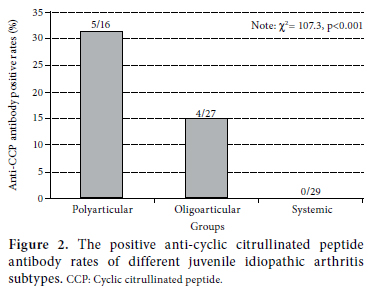 Table 3. Comparisons between the disease courses in both the polyarticular juvenile idiopathic arthritis group and the oligoarticular group
×

Up to now, the factors that cause JIA and its pathogenesis still remain explored mystery. Juvenile idiopathic arthritis has clinical features which greatly differ from those of RA.[15,16] It is also generally thought to be a heterogeneous disease that has close correlations with genetic predisposition, immunologic derangement, and environmental factors. Based on differences in onset features, clinical manifestations, disease courses, and outcomes, JIA can be classified into different subtypes such as systemic JIA, polyarticular JIA, and oligoarticular JIA.[17] Juvenile idiopathic arthritis is an autoimmune disease which can lead to a high disability rate among children; therefore, early diagnosis and treatment are vital for the improvement of joint lesions and the prognosis of the patients.

However, since a highly specific and sensitive laboratory marker of JIA has not yet been found, diagnosis mainly depends on the clinical manifestations. Although RF has a high sensitivity in the diagnosis of RA (but with a low specificity), it has a low sensitivity in the diagnosis of JIA.[18] Anti-cyclic citrillunated peptide antibodies have only been recently reported to have specific antibodies which reveal a diagnostic value for the diagnosis of RA.[19] In the current study, the positive anti-CCP antibody rate in the JIA group was 12.5%, which is basically consistent with a previous report by van Rossum et al.,[10] and the rate of the control group was 0%. These results suggest that anti-CCP antibodies have a high specificity in the diagnosis of JIA (100%). Among 65 patients with RA, 48 had positive anti-CCP antibodies, and the rate was 73.8%, which falls between the previously reported rates of 40% and 85% seen in the literature.[7,8,20] These results show that anti-CCP antibodies have a lower sensitivity to JIA than RA. Significant differences in distribution among patients with different subtypes of JIA have been determined via anti-CCP antibodies. In our study, the positive anti- CCP antibody rates of the polyarticular, oligoarticular, and systemic JIA groups were 45.5%, 17.4% and 0%, respectively. This suggests that they are of certain directive significance in JIA clinical typing.

In addition, in order to make sure that the results obtained from our experiment were stable, parallel detections were performed using three different types of kits, and no significant differences were detected among the positive rates of the experimental subjects. This suggests that ELISA is a stable and reliable method for serum anti-CCP antibody detection.

Furthermore, we also analyzed radiological data in our study, and the results showed that joint destruction in the positive anti-CCP antibody JIA group was more severe than that in the negative anti-CCP antibody JIA group. This suggests that anti-CCP antibody detection has an important role in the evaluation of the severity of joint destruction in patients with JIA and in the prognosis of the patients. In addition, the RF positive rate of the positive anti-CCP antibody group was noticeably higher than that of the negative group, suggesting that the combined detection of anti- CCP antibodies and RF is helpful for increasing the sensitivity and specificity in the diagnosis of JIA. These results are consistent with previous studies,[21-23] and their simultaneous presence may be an indication for earlier immunosuppressive treatment.[24]

No significant difference in disease course was found between the positive and negative anti-CCP patients in either the polyarticular group or the oligoarticular group, which seems to indicate that anti- CCP antibodies cannot serve as a reliable serological marker in the early diagnosis of JIA. However, our study showed that positive anti-CCP antibodies were primarily found in children with polyarticular and oligoarticular JIA, which conveys the idea that anti-CCP antibody detection might be of clinical significance in JIA typing and the prognostic evaluation of patients.