Celiac disease (CD) is an autoimmune disease triggered by the ingestion of foods containing gluten (gliadin). Celiac disease is usually diagnosed in childhood. Celiac disease, which has an insidious onset in adults, is rarely seen in the puerperium. A 26-year-old female admitted with the complaints of cramps in her hands and feet, and weight loss in the puerperium. Vitamin D deficiency was found with concomitant hypocalcemia and low bone mineral density. The patient was diagnosed with CD in the puerperium by means of biopsy and antibody testing. From the first week of the gluten-free diet and supportive therapy, remarkable improvement was observed in the patient's clinical manifestations. In conclusion, although CD is a disease frequently diagnosed during childhood, it should not be overlooked for the maternofetal health that CD may also develop during pregnancy and the puerperium.

Celiac disease (CD) is an autoimmune disorder triggered by the ingestion of foods that contain gluten (gliadin).[1,2] The prevalence of CD ranges from 0.5-1%.[3] The prevalence of undiagnosed CD in the puerperium among women is unknown; however, CD rarely develops during the first pregnancy or puerperium.[4] Herein, a patient diagnosed with CD who developed vitamin D deficiency and weight loss during the puerperium is presented.

A 26-year-old primipara presented with complaints of cramps in her hands and feet which began one month after the birth of a 1800 g low-birth-weight infant at 30 weeks gestation. She had had these symptoms for one month. The physical examination of the patient, who had lost more than 10% of her body weight (6 kg) in one month, revealed a positive Chvostek’s sign and a negative Trousseau’s sign. The results of the laboratory examination were as follows: serum calcium 6.8 mg/dL (8.2-10.5 mg/dL); phosphorus 4 mg/dL (2.5-4.8 mg/dL); albumin 3.6 g/dL (3.5-5.2 g/dL); parathormone (PTH) 144.7 pg/mL (15- 65 pg/mL); 25-hydroxy vitamin D 25(OH)D 9 ng/mL (<10 ng/ml indicates severe deficiency); potassium 3.5 mEq/L (3.5-5.5 mEq/L); hemoglobin 11.8 g/dL; hematocrit 37.5%; ferritin 20.92 ng/mL (5-148 ng/mL); and vitamin B12 193 pg/mL (193-982 pg/mL). The levels of blood urea nitrogen (BUN), serum creatinine, thyroid-stimulating hormone, aspartate transaminase, alanine transaminase, alkaline phosphatase, creatine kinase (CK), amylase, and bilirubin along with the leukocyte count were normal. The total T and Z scores of the vertebrae by dual energy X-ray absorptiometry were -2.9 and -2.8, respectively, and the total T and Z scores of the femur were both -3.4. The patient declined a bone biopsy planned for the diagnosis of suspected osteomalacia. The anti-endomysium (1/100 titer) and anti-gliadin (1/100 titer) immunoglobulin A (IgA) antibodies were positive. Endoscopically, there was a granular and nodular appearance in the second part of the duodenum and bulbous. Biopsies obtained from the duodenum revealed a loss of villi, the presence of massive intraepithelial lymphocytes, and lymphoplasmacytic infiltration, including eosinophils in the lamina propria. Immunohistochemically, the intraepithelial lymphocytes stained positively for cluster of differentiation (CD)3 and CD8 but negatively for CD4 and CD20. According to the modified Marsh classification,[5] the results were consistent with CD, type 3B (Figure 1). A gluten-free diet was initiated, and oral calcium and vitamin D were administered to the patient. The complaints of cramps in her hands and feet resolved after the first week of the gluten-free diet. The calcium and PTH levels of the patient, who gained 5 kg in the second month of therapy, are now within normal ranges, and she is undergoing follow-up care. 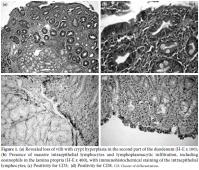 Figure 1. (a) Revealed loss of villi with crypt hyperplasia in the second part of the duodenum (H-E x 100); (b) Presence of massive intraepithelial lymphocytes and lymphoplasmacytic infiltration, including eosinophils in the lamina propria (H-E x 400), with immunohistochemical staining of the intraepithelial lymphocytes; (c) Positivity for CD3; (d) Positivity for CD8. CD: Cluster of differentiation.
× 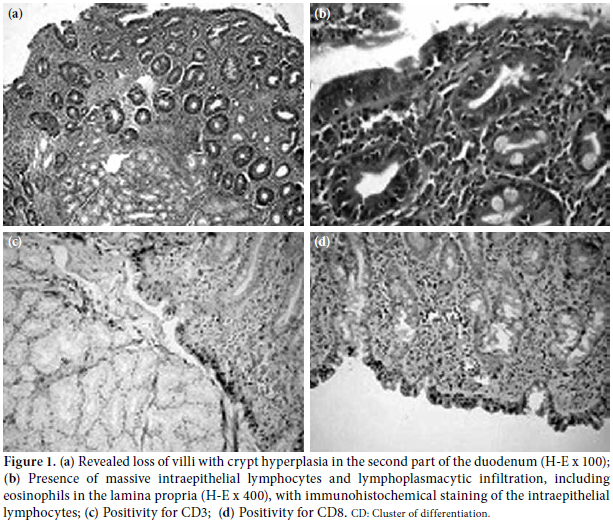 The patient described herein was diagnosed with vitamin D deficiency and CD in the puerperium by means of a biopsy and antibody testing.

The causes of hypocalcemia can be differentiated by whether the serum PTH levels are low (hypoparathyroidism) or high (secondary hyperparathyroidism). Secondary hyperparathyroidism is seen in nutritional vitamin D deficiency, renal insufficiency, vitamin D resistance, including receptor defects, PTH resistance syndromes, drugs (calcium chelators, bisphosphonates, plicamycin, phenytoin, and ketoconazole), acute pancreatitis, acute rhabdomyolysis, and hungry bone syndrome after parathyroidectomies.[6] Our patient had no history of neck surgery or drug use. Acute pancreatitis, rhabdomyolysis, and renal insufficiency were excluded by physical examination and laboratory evaluations.

In vitamin D deficiency, osteomalacia, an increase in bone remodeling, and a decrease in bone mineral density (BMD), particularly in the proximal femur, along with an increased risk of osteoporotic fractures, hypocalcemia, hypophosphatemia, and low excretion of urinary calcium may occur. An increase in PTH is also possible for adults. Measuring the 25(OH)D is necessary for the early diagnosis of vitamin D deficiency.[7,8] Low or low-to-normal levels of 25(OH)D indicate a vitamin D deficiency due to lack of sunlight, inadequate vitamin D intake, or intestinal malabsorption.[7] Celiac disease that leads to malabsorption is one of the known causes of vitamin D deficiency.[1] The diagnosis of CD is usually made in childhood. Celiac disease has a more insidious onset in adults.[3] In adults, CD may be expressed with different clinical symptoms.[1,2] In recent years, there has been an increased recognition of possible changes in male and female fertility in CD as well as the potential for adverse outcomes in pregnancy and the post-partum period that may lead to miscarriages and premature low-birth-weight fetal deliveries.[9] In a study conducted by Ciacci et al.,[10] the prevalence of recurrent abortion and intrauterine growth retardation (IUGR) in patients with CD was reported to be 8.9 times higher than in the normal population. Reduced birth weight and IUGR have also been recorded in several other studies from European centers.[4,11] Undiagnosed maternal CD appeared to be a far greater risk factor than diagnosed CD, but in a subsequent report, undiagnosed CD was not associated with an unfavorable outcome of pregnancy.[12,13] Our patient is the mother of a lowbirth- weigth infant. Although rare, CD cases with an onset during pregnancy and the puerperium have been reported.[14-17] Mechanisms involved in the impairment of pregnancy outcome in CD have been explored to a limited degree. The placentas in mothers affected with CD appear to be abnormal.[9] The reason for the development of CD in the puerperium is not completely clear, and the exact cause of probable autoimmune activation related to pregnancy or puerperium is not known.[18] Rheumatoid arthritis usually enters remission during pregnancy and is exacerbated in approximately 70% of patients in the post-partum period. Conversely, systemic lupus erythematosus (SLE) has classically been thought to show an exacerbation of the disease in the last trimester of pregnancy. It is believed that humoral immunity is dominant in SLE, and cellular immunity is dominant in RA.[19] The activation of CD during the puerperium has been hypothesized to be related to immunological factors, hormonal factors, or both.[15] The current hypothesis is that the latent CD cases are stimulated by extreme differences in female hormone levels, particularly by prolactin levels.[18] The sex hormones have remarkable effects on the immune system. Estrogens inhibit T suppressor cells and enhance the antibody production of B cells.[20] Occasionally, the presentation may be acute, leading to speculation that the activation of CD may result from maternal exposure to fetal antigens.[16] In conclusion, although CD is a disease frequently diagnosed during childhood, the possibility that CD may also develop during pregnancy and the puerperium should not be overlooked.