We report a rare case of histopathologically confirmed lupus myositis that developed in a 32-year-old female with seropositive rheumatoid arthritis that had been treated with adalimumab for one year. She had demonstrated excellent response to her arthritis initially but then developed profound muscle weakness with a conversion of her antinuclear antibody and anti-double stranded DNA from negative to strongly positive. Her creatinine kinase levels remained normal. She responded well to high-dose steroid therapy and rituximab.

The anti-tumor necrosis factor (anti-TNF) agents are now widely used in the management of patients with rheumatoid arthritis (RA), spondyloarthritis, psoriasis, juvenile inflammatory arthritis, and Crohn’s disease. Concerns should be raised regarding the safety profile of these agents, especially with increased usage and longer follow-up periods. One of the most common side effects of anti-TNF agents is the development of autoantibodies.[1] However, there are a growing number of reports of the development of autoimmune diseases after TNF-targeted therapies.[2] Here, we report a case of RA treated successfully with methotrexate and adalimumab who developed lupus myositis. Subsequently, she responded well to a high dosage of steroid therapy and rituximab.

A 32-year-old female patient presented to the outpatient rheumatology clinic in February 2007 with left leg swelling. An ultrasound examination revealed a ruptured Baker cyst and mild left knee effusion. She had no other symptoms or signs suggestive of a systemic disease. Left knee aspiration was not attempted given the small amount of fluid. An initial exam revealed negative serology for rheumatoid factor (RF) and antidouble- stranded deoxytribonucleic acid (anti-dsDNA) and the antinuclear antibodies (ANA) titer was 1:160. A diagnosis of undifferentiated arthritis was suggested, and the patient responded well to a tapering regimen of prednisone. She was started on an escalating dosage of sulfasalazine but unfortunately could not tolerate it because of skin rash, despite adequate initial response. She had a recurrence of left knee effusion after stopping the drug, which was then aspirated and injected with a steroid. All cultures were negative, and she was maintained on hydroxychloroquine.

In March 2009, she presented with prolonged morning stiffness and polyarthritis, as evidenced by swelling or tenderness in her metacarpophalangeal joints (MCPs), elbows, shoulders, knees, and ankles. The serology for RF and anti-citrullinated protein antibodies (ACPA) came back positive, but with a normal C-reactive protein (CRP) level of 0.49 mg/L (0-5 mg/l). She was diagnosed with RA and was started on methotrexate 10 mg/week. Adalimumab 40 mg bi-weekly was added four weeks later to enhance her response, She showed significant improvement with complete remission of her disease, and she was maintained on methotrexate 15 mg/week and adalimumab.

In December 2009, the adalimumab frequency was decreased to once per month. As the patient wanted to conceive, a slow tapering of her methotrexate dosage was started with a plan of reaching 7.5 mg/week over a threemonth period followed by complete discontinuation for at least three months prior to conception. In April 2010, she presented with symptoms of profound weight loss, night sweats, intermittent fevers, and a sore throat. She had stopped the methotrexate and adalimumab during her febrile episodes. She did not have any clinical signs of active arthritis, and there was no lymph node enlargement. She had a high CRP rate of 42 mg/L, leukopenia of 2.63x103g/L, and lymphopenia of 0.86x103 g/L. All tests to rule out infection were negative, including blood, urine, and stool cultures. Brucella titer, malaria, schistosomiasis, human immunodeficiency virus (HIV), Epstein-Barr virus (EBV), and cytomegalovirus (CMV) serologies were all negative. Computed tomography (CT) scans of the head, neck, paranasal sinuses, chest, abdomen, and pelvis were all within normal limits, as well. She was kept on naproxen and paracetamol to control her pain and fever and also received a course of oral antibiotics from a local facility for presumed pharyngitis. An otolaryngology (ENT) referral failed to demonstrate an etiology for her symptoms. Three weeks later, she presented with diffuse muscle weakness, which was mainly proximal rather than distal. She was unable to get out of bed, climb stairs, or even stand from a sitting position. She had signs of active arthritis in two metacarpophalangeal (MCP) joints in the right and bilateral wrist joints. She had a mild hyperpigmented area around the mouth, but no skin rashes elsewhere. The results of respiratory and cardiac examinations were normal. After admission to the hospital, further tests ruled out thyroid and adrenal disorders. The ANA titer was 1:1280, and the anti-ds DNA was 27.5 U/ml (normal value 0-20 U/ml). Her CRP level was high at 56 mg/L while her creatinine kinase (CK) level was entirely normal. Electromyography (EMG) showed the presence of spontaneous activities suggestive of inflammatory myopathy. Magnetic resonance imaging (MRI) of the right arm showed mild edema involving the right triceps muscle with minimal enhancement in the post contrast sequence (Figure 1). Biopsies of both the right arm (triceps muscle) and right thigh (vastus lateralis muscle) were taken, and the MRI of the right arm revealed inflammatory myositis (focal mild perivascular and endomysial lymphohistiocytic inflammation), (Figure 2). The MRI of the thigh was normal. She was diagnosed with a case of adalimumab-induced lupus myositis and received 1 gm of methylprednisolone intravenously daily for three days. She was then maintained on 60 mg per day for 28 days. Given her profound weakness, rituximab 1000 mg was given intravenously and was well tolerated. She was discharged on May 31, 2010 and continued taking prednisone 60 mg per day. Two weeks later, she received another dose of rituximab 1000 mg. She was maintained then on a tapering regimen of prednisone, azothioprine 50 mg twice daily, hydroxychloroquine 200 mg twice daily, plus calcium and vitamin D. During her last assessment eight months later, she was asymptomatic with normal muscle strength, CRP, anti-dsDNA (11U/ml), and ANA titer (1:360) and was no longer on steroids. 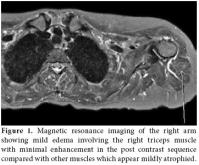 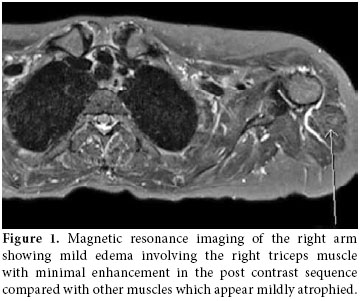 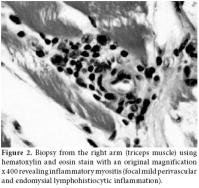 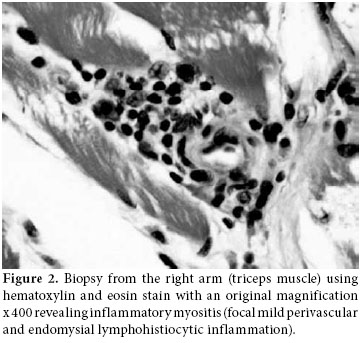 Tumor necrosis factor-alpha (TNF-α) is a cytokine that plays a crucial role in causing inflammation by means of predominantly T-cell-mediated tissue damage. Infliximab is a chimeric, monoclonal antibody against TNF-α administered as an intravenous infusion. Etanercept, a p75 TNF-receptor fusion protein conjugated to the Fc region of human immunoglobulin G (IgG), is administered as a subcutaneous injection once weekly. Adalimumab, a human anti- TNF monoclonal antibody, is also administered subcutaneously bi-weekly. These three agents have been reported to be safe and effective in the treatment of RA. More than one million patients with different diseases have been treated with anti-TNF agents.[3] This number is on the rise given more diseases have received the approval for the use of anti-TNF-α agents. This is in addition to a prolonged period of follow-up and more off-label usage of anti-TNF-α agents in the treatment of other diseases. It is not surprising then to expect more side effects to be reported. This should help widen our experience in dealing with patients treated with these agents.

The emergence of immunogenicity as positive ANA, anti-dsDNA antibodies, and drug-induced lupus during anti TNF-therapy has been widely documented with varied frequency. The rise in incidence of autoantibodies following infliximab therapy in one study was 53% for ANA and 14% for anti-DNA antibodies.[4] Variable numbers have been reported with different anti-TNF-α agents in different studies. The presence of anti-dsDNA antibodies of the IgG subtype is considered rare and more pathogenic compared with IgM and IgA.[1,4,5] Several studies consistently demonstrated a substantial increase in autoantibody production with infliximab compared with etanercept in terms of the induction of ANAs and anti-dsDNA antibodies.[1] Lupus-like syndrome and systemic lupus erythematosus (SLE) were the most common autoimmune diseases in a registry of autoimmune diseases associated with anti-TNF-α agents.[2] In all cases with clinical and immunological features suggestive of SLE, 94% had positive autoantibodies, 89% had cutaneous features, 39% had musculoskeletal manifestations, and general symptoms were present in 29%.[2] Nephropathy and central nervous system involvement were considered to be rare findings.[1,2] Anti-histone antibodies were either never detected or rarely found when compared with procainamide-induced lupus.[1,2,4,5]

Adalimumab induces apoptosis which prompts the release of nuclear antigens. The engagement of rheumatoid factor-expressing B cells and Toll-like receptor-9 (TLR9) with the antigens results in antibody formation.[3] It has been suggested that the drug affects T helper 1/T helper 2 (Th1/Th2) cell balance. Adalimumab treatment strongly increases cytokines which stimulates Th1 activity in contrast with antiinflammatory and Th2-associated cytokines, which are not significantly changed.[6] There may be a subset of patients, probably with a TNF-α gene polymorphism such as TNF-308A, who respond differently to a TNF-α blockade in the setting of active inflammatory muscle disease.[7]

Inflammatory myopathies were reported to be induced by anti-TNF-α agents with elevated CK levels, myopathic changes in EMG, and variable findings on histopathological examination.[3,8-10] Our patient had a normal CK with myopathic changes in EMG and findings consistent with nonspecific myopathy on histopathological examination. She had fulfilled the American College for Rheumatology (ACR) criteria for SLE with strongly positive ANA and antidsDNA, arthritis and leukopenia. It is postulated that her atypical myositis might be related to new onset SLE. In a report of 12 patients who developed definite SLE while on anti-TNF-α treatment, four also had myositis.[11] The clinical presentation of anti-TNF-α-induced systemic lupus erythematosus (ATIL) can vary, and specific diagnostic criteria have not been established. However, in most reported cases,[12,13] the diagnosis was made on the basis of the development of one or more symptoms compatible with SLE, ongoing exposure to an anti-TNF-α agent, no prior history of SLE, or resolution of symptoms when the offending drug is discontinued. A widely accepted definition is the presence of definite SLE, according to the ACR criteria, concomitant with exposure to a lupus-inducing drug.[14] In the case reported here, there was a temporal relationship of four distinct ACR criteria for SLE regarding adalimumab usage. There was significant initial response to arthritis, but arthritis reappeared with other lupus symptoms and signs. Lastly, there was strong positive conversion in the autoantibodies. All of the above would suggest the diagnosis of a drug-induced lupus myositis rather than rheumatoid myositis.

The management of anti-TNF-α-induced autoimmune diseases necessitates the discontinuation of the offending agent. This was followed in the majority of reports by the use of a corticosteroid. It has been observed that the majority of cases of lupus associated with anti-TNF-α agents carry a benign course with good prognosis.[2] Immunosuppressive therapy in combination with a corticosteroid has been reported in the management of myositis associated with anti-TNF-α agents. Methotrexate, azathioprine, cyclophosphamide, hydroxycholoroquine, and rituximab have all been used.[7,9,10,15] Pulse methylprednisolone was used in the case reported here given the patient’s profound weakness at presentation. She showed significant improvement on a course of prednisone and rituximab infusion, and was maintained on azathioprine and hydroxychloroquine.

In conclusion, in patients like ours with seropositive RA who are using adalimumab or other anti-TNF-α agents, clinicians should be aware that autoimmune syndromes with systemic manifestations, including SLE and myositis, might occur. In cases in which autoimmunity is suspected, ANA and anti-DNA antibodies should be determined immediately, and close clinical examination should be performed. We recommend routine screening for autoantibodies prior to the initiation of any anti-TNF-α agent. Appropriate intervention should then be undertaken. High doses of corticosteroids and rituximab can be used in the management of adalimumab-induced lupus myositis.

Funding
This work was supervised and supported by the Alzaidi Chair of Research in Rheumatic Disease at Umm Alqura University.