Objectives: This study aims to determine whether Vitamin D receptor (VDR) gene TaqI and ApaI polymorphisms are involved in the development of osteoarthritis in the Turkish population.

Patients and methods: In this study, genomic DNA was isolated from 140 subjects (95 patients with osteoarthritis and 45 healthy controls). The DNA was amplified with specific primers by polymerase chain reaction and the restriction fragment length polymorphism (RFLP) technique was used to analyze the VDR gene TaqI and ApaI polymorphism genotypes. Polymerase chain reaction-RFLP products were assessed with and ultraviolet transilluminator by being exposed to agarose gel electrophoresis.

Results: In terms of the genotype distributions and the allele frequencies of VDR gene TaqI and ApaI polymorphisms, there was no statistically significant difference (p>0.05) between the osteoarthritis patients and the controls. In addition, there was also no statistically significant difference between the genotypes and clinical characteristics of the patients or controls.

Conclusion: In conclusion, the results of the present study suggest that VDR gene TaqI and ApaI polymorphisms are not involved in the development of osteoarthritis in the studied Turkish population.

Osteoarthritis (OA) is the most common form of arthritis and a leading cause of musculoskeletal disability in middle-aged and elderly people.[1] Pathologically, OA is characterized by the focal degeneration of the smooth articular cartilage in any part of the synovial joints of the body, and the most frequently affected joint sites are the spine, hands, knees, and hips.[2] The most frequent clinical findings in OA are pain associated with loading and limited range of motion in the joints at later stages.[3] Because there is no effective therapy to reverse or slow down the degenerative process, OA has a high socio-economic burden.[4] Several factors play a role in the variability of OA risk, including age, sex, genetics, ethnicity, behavioral influences, obesity, and occupation.[5,6] Genetic factors account for 40 to 85% of OA development.[5] The identification of disease-susceptibility genes would help us not only to understand the pathogenesis of OA better but also to gain insight into new therapeutic targets.[7] Until now, some candidate genes have been proposed for OA, including the vitamin D receptor (VDR) gene. The VDR gene is an important regulator of calcium metabolism and bone cell function. Genetic variants of the VDR gene locus on chromosome 12 are associated with bone density, which was found to increase in patients with OA.[8] Nonetheless, it is still uncertain whether genetic variants of the VDR gene (TaqI and ApaI polymorphisms) are involved in the development of OA.[9-11] Since gene pools, lifestyle, and geneenvironment interactions vary between populations, the risk should not be the same with respect to genotypes in every population.[12] The aim of the present study was to determine if the polymorphisms of the VDR gene, TaqI and ApaI, are involved in the development of osteoarthritis in the Turkish population.

Study population
This study included 95 unrelated OA patients and 45 healthy controls without OA who were recruited from the Department of Orthopedics and Traumatology in the Private Muş Şifa Hospital, Muş, Turkey. Informed consent was obtained from each patient in accordance with the study protocol, and the ethics committee of Medical Faculty, Eskişehir Osmangazi University, Eskişehir approved this study. Inclusion criteria were as follows: any symptom and/or sign of OA, positive findings in the radiographs according to Kellgren– Lawrence grading, and no evidence of arthritis due to other diseases. Clinical information was obtained by patient history, physical examination, and radiographic findings. In addition, demographic characteristics (age, gender), body mass index (BMI), and clinical features of the disease severity assessed by Kellgren-Lawrence grading[13] and Lequesnes’ functional index[14] were recorded. The Kellgren-Lawrence grade represents the severity of the disease on radiographs whereas Lequesne’s functional index represents the functional or symptomatic status of the patients. The radiographic findings of OA were classified as Kellgren-Lawrence grades 1, 2, 3, or 4. The functional or symptomatic status of the patients was classified as mild (Lequesne’s functional index IB10) or severe (Lequesne’s functional index IC10). Control subjects were consecutively selected among people without a personal and familial history of OA. The clinical characteristics of the patients with OA and controls are summarized in Table 1.

Deoxyribonucleic acid (DNA) isolation
DNA was extracted from venous blood according to a kit procedure (Vivantis, Malesia) and stored at -20 °C until analysis.

Genotype determination of ApaI and TaqI polymorphisms of VDR gene
The DNA was amplified by a polymerase chain reaction (PCR) in a thermal cycler (Nyx Technik, Inc., Amplitronyx 4, CA, USA). Allele-specific primers used in the PCR were as follows: forward, 5’-CAG AGC ATG GAC AGG GAG CAA-3,’ and reverse, 5’-GCA ACT CCT CAT GGC TGA GGT CTC-3,’. A DNA sample of 5 μl was amplified for 35 cycles with denaturation at 94 °C for 30 seconds, annealing at 70 °C for 30 seconds, and extension at 72 °C for 30 seconds using a 50 μl PCR mixture that contained 10 pmol of each primer, a 10x PCR buffer, 2 mM dNTPs, and a 5U Taq polymerase. After confirmation of an amplified fragment of the expected size (740 bp) by electrophoresis on 2% agarose gel, the PCR products were digested with 5 units of restriction enzyme TaqI (Vivantis, Malesia) at 65 °C for one hour for TaqI polymorphism genotype determination and 5 units of restriction enzyme ApaI (Vivantis, Malesia) at 37 °C for one hour for ApaI polymorphism genotype determination. Digested PCR products were separated by electrophoresis on 2% agarose gel containing 4 μl ethidium bromide. They were then visualized using a UV transilluminator (Nyxtechnik, Inc., CA, USA) and photographed with a CCD camera (Cleaver, UK), (Figures 1 and 2). 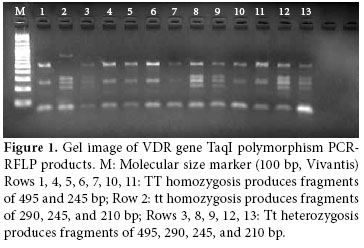 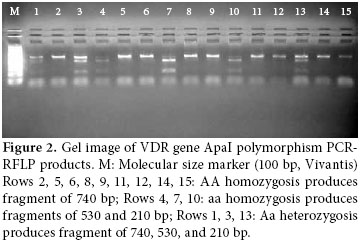 Statistical analysis
Statistical analysis was performed using Statistical Package for Social Sciences (SPSS Inc., Chicago, Illinois, USA) software package version 15.0. The Shapiro- Wilk normality test was applied for all variables. Because the variables did not distribute normally, they were reanalyzed using the Mann- Whitney U and Kruskal-Wallis tests. Categorical variables were compared by Pearson’s chi-square and the Continuity Correction chi-square tests. Hardy- Weinberg equilibrium was assessed by chi-square analysis. The values were expressed as means ± standard error (SE) and median (25-75%) quartiles. Variables were given as “n” and “%”. P values of less than 0.05 were considered statistically significant.

However, genetic polymorphism studies in larger populations should yield more significant results. Also, it should not be suggested that the results of this study should be used as a litmus test for the whole Turkish population, but rather it renders an opinion. As previously mentioned, gene pools, lifestyle, and geneenvironment interactions vary between populations, so the risk of OA development cannot be assumed to be similar with respect to genotypes for all people. Further studies with larger and even more varied populations as well as studies performed using other genetic polymorphisms which might be considered to be risk factors for OA should provide important validation for these results.