Retroperitoneal fibrosis (RPF) is characterized by progressive connective tissue proliferation which in rare cases forms a periaortic mass. Aortitis is clinically uncommon in systemic lupus erythematosus (SLE), and only one previous case with aortitis has been reported in the literature in living adult patients with lupus. Herein, we report a case with RPF and aortitis as the initial findings of SLE. The patient was admitted to our clinic with severe abdominal pain, nausea, and photosensitivity along with painful, maculopapular lesions on both palms.

Retroperitoneal fibrosis (RPF) is a clinical entity characterized by the progressive proliferation of the connective tissue which on rare occasions forms a mass involving the periaortic area in the abdomen. It was first described by the French urologist Albarran in 1905, but the etiology is still unclear.[1-3] This process is a chronic inflammatory response to a number of possible inciting factors, including infections, tumors, and systemic processes such as lupus, vasculitis, and auto-allergic reactions.[2,4] Only a few cases of the coexistence of systemic lupus erytematosus (SLE) and RPF have been reported in the recent literature. Although the vascular complications of SLE have been extensively documented in the literature, aortitis is very rare in patients with SLE.[1] Most cases of lupusassociated aortitis have been described in conjunction with aortic aneurysms or aortic dissection and have been documented either at autopsy or during surgery to repair a dissection.[1]

Herein, we present a male patient with RPF and aortitis as the initial and presenting features of SLE.

A 28-year-old male patient was admitted to our hospital with complaints of severe abdominal pain and nausea which had started six weeks previously. There were painful, maculopapular lesions that responded well to a topical steroid in both of the palms. The patient had also been suffering from photosensitivity for the last eight months. He had been diagnosed with type 1 diabetes mellitus (DM) and prothrombin 20210a gene mutation during the last 12 years and he had also a history of deep vein thrombosis (DVT) in 2002 and pulmonary thrombo embolism (PTE) in 2006. His mother also had a history of prothrombin 20210a gene mutation and type I DM. He was being treated with a daily dose of glargine insulin and warfarin. His physical examination at the time of admission revealed hypertension (170/100 mmHg), maculopapular lesions on both palms, hepatosplenomegaly, and abdominal tenderness. The laboratory examination was as follows: white blood cells (WBC) counts 15000/mm3, hemoglobin 16.3 gr/dl, platelets 92 000/mm3, blood urea nitrogen (BUN) 20 mg/dl, creatinine 1.46 mg/dl, erythrocyte sedimentation rate (ESR) 40 mm/h, C-reactive protein (CRP) 8.8 mg/dl (0-0.8), and fibrinogen 712 mg/dl (219-403). A urinalysis presented the following results: +++protein, +++blood, no casts, and microprotein in 24 h urine 900 mg/day (0-80). The serologic tests were the followiong: anti-nuclear antibodies 1/320 (homogeneous pattern), anti-double-stranded deoxyribonucleic acid (anti‐dsDNA) 1.7 (0-1.1), rheumatoid factor 22.0 IU/mL (0-15), anti-cardiolipin IgG>300 GPL/mL (0-15), and anti-phospholipid IgG 232 GPL/mL (0-15). A chest X-ray showed minimal pleural effusion and the electrocardiography ECG was normal. There was no thrombus and no vegetation in the transesophageal echocardiography (TEEC). For further evaluation of the thrombocytopenia, bone marrow aspiration and a biopsy were performed, but there were no pathological findings to explain the situation. Also, a skin biopsy from the palms was done to search for the etiology, but this also yielded no clues. Angiography with abdominal computed tomography revealed a thickening of the wall of the thoracic and abdominal aorta and an increased density of the surrounding fat tissues at the level of bifurcation. These were compatible with the diagnosis of vasculitis and retroperitoneal fibrosis (figures 1 and 2). 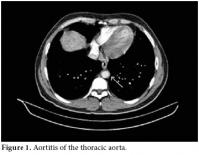 Figure 1. Aortitis of the thoracic aorta.
× 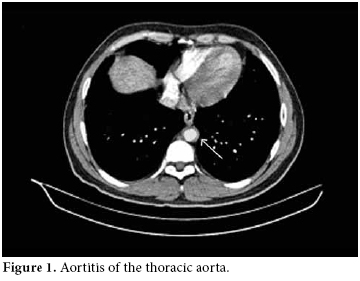 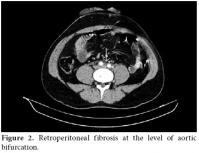 Figure 2. Retroperitoneal fibrosis at the level of aortic bifurcation.
× 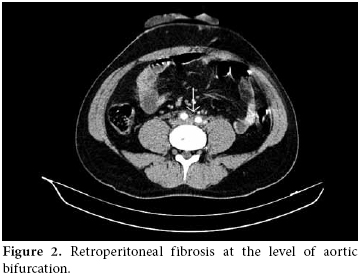 A steroid, cyclophosphamide, and mycophenolate mofetil combination therapy was considered to be appropriate based on these findings. A daily administration of oral 60 mg prednisolone for seven days followed by an alternate steroid dosage of 60 mg one day and 20 mg the next day that was to be reduced over time to a thrice-weekly dose of 1 gr pulse prednisolone which was then to be reduced to three times every 10 days followed by three times every 15 days and then monthly was implemented. All of this was done in conjunction with 500 mg cyclophosphamide which was to be taken only two times within a seven-day interval protocol followed by oral 2000 mg/day mycophenolate mofetil to be taken for seven days after the last dose of cyclophosphamide was started. In addition, subcutaneous heparin 6000 IU/day was offered followed by oral warfarin for the anti-cardiolipin IgG and anti-phospholipid IgG positivity. The abdominal pain decreased 20 days after the first day of the treatment, and the serological markers returned to normal levels. Since then, the patient has been doing well with the ongoing oral treatment and four months have passed since the treatment began. A new abdominal CT has been planned for the sixth month of the treatment.

Retroperitoneal fibrosis is a fibro-inflammatory process affecting the retroperitoneal structures. The incidence is 1/200 000, and men are two to three times more likely to develop RPF than women.[2] Most cases (70%) are thought to be idiopathic.[2] The occurrence of RPF in patients with connective tissue or autoimmune diseases such as SLE, RA and vasculitis is noted but is not frequent in either children or adults.

Systemic manifestations (fever, anorexia, weight loss) often associated with local symptoms (flank pain, leg edema, abdominal discomfort) are related to the entrapment of retroperitoneal structures by the fibrotic plaques.[4,5] There are no well-defined guidelines for the diagnosis or treatment of RPF.[6] Retroperitoneal fibrosis rarely remits spontaneously, and prolonged therapy with a high dose of steroids combined with immunosuppressive drugs is usually required.

Aortitis occurs in association with idiopathic RPF, inflammatory abdominal aortic aneurysm, and perianeurysmal RPF. These disorders are unique in that inflammation, although symptomatic, is limited to the aorta and periaortic tissues rather than a manifestation of widespread vasculitis. Similarly, in a significant percentage of cases, the diagnosis of aortitis is an incidental histopathological finding because no rheumatological disorder, infection, or symptoms are attributable directly to the aortitis. Such cases of idiopathic isolated aortitis typically are localized to the ascending thoracic aorta and occur in association with an ascending aortic aneurysm.[7]

In this report we described a male patient with SLE and RPF. He had only laboratory indicators of SLE and photosensitivity. Most cases of RPF are idiopathic and are not associated with specific diseases. Retroperitoneal fibrosis associated with SLE is thought to be very rare. In our patient, RPF was seen as the initial symptom of SLE along with radiologically proven thoracic and abdominal aortitis. In the literature, such a case has practically never been encountered. Previously, only one case was reported in the literature of SLE and aortitis in a living adult that was unrelated to aneurysm or dissection, but aortitis was diagnosed at the time of the autopsy.[1] It seems that much of the available literature is focused on postmortem pathology.

Corticosteroids are used as the first-line treatment, and early immunosuppressive therapy may prevent chronic inflammation and occurrence of the complications in the aorta.[1] Despite the rarity of aortitis in SLE, the morbidity and mortality is high.[1] Our patient has done well after the combination therapy.

In conclusion, SLE patients with abdominal pain and edema may have RPF and aortitis. Because the complications and mortality are high, early treatment after early diagnosis is obligatory with combination therapy.