Grisel's syndrome is a non-traumatic atlantoaxial subluxation associated with inflammatory conditions of head and neck which occurs primarily in children. Increased flexibility of the ligaments during the inflammation is implicated in the pathogenesis of the subluxation between the axis and atlas. The diagnosis is made by clinical and radiological findings. In this article, we present a 19-year-old male patient who was admitted with a complaint of gradually increasing neck pain and stiffness. He had no history of trauma. Cervical spine radiography and computed tomography revealed atlantoaxial subluxation. Magnetic resonance imaging revealed subluxation and retropharyngeal soft tissue infection. Based on the clinical and radiological findings, we diagnosed the patient as having Grisel's syndrome, and the patient was treated with intravenous antibiotics and internal immobilization. Although the potential sequelae may be severe, early diagnosis and treatment of Grisel's syndrome can prevent tragic outcomes.

Non-traumatic atlantoaxial subluxation (NAAS) or atlantoaxial rotatory subluxation (AARS) was first described by Charles Bell in 1830 in a patient with syphilis, pharyngitis, and lethal spinal compression.[1] The syndrome was named after Grisel who described two cases of pharyngitis and atlantoaxial subluxation in 1951.[1] However, it is a rare condition usually seen in children with upper servical infections or otolaryngeal procedures.[2] Patients generally complain about neck stiffness and pain, and sometimes dysphagia may occur. Diagnosis is established based on the clinical and radiological findings.[3]

Being in a special region with the ability to cause morbidity and mortality, early identification of the atlantoaxial subluxation along with neurosurgical consultation is important. We present the case of a male patient with Grisel's syndrome in which we could find no etiological agent other than the possibility of an insect bite on the neck. Diagnosis as well as management is discussed.

A 19-year-old male patient was admitted to our hospital having complained of neck pain and stiffness for two months. There was no history of trauma, but the patient had been bitten by an insect on his neck two weeks previously which could have caused his symptoms. A neurological examination did not show any focal deficits, and a throat examination was normal. The range of motion in his neck was completely limited, and the patient suffered from severe neck pain and stiffness. There was no fever. The erythrocyte sedimentation rate (ESR) was 69 mm/h, the C-reactive protein (CRP) was 3.9 mg/dl, and the white blood cell count (WBC) was 15.500 U/ml with high levels. All other laboratory tests, including tumor markers, immunological markers, brucella aglutination test, anti-Borellia antibodies, and acid- resistant bacilli (ARB) for tuberculosis, were normal. Recurrent throat cultures showed normal flora. 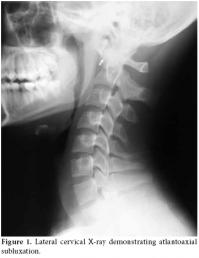 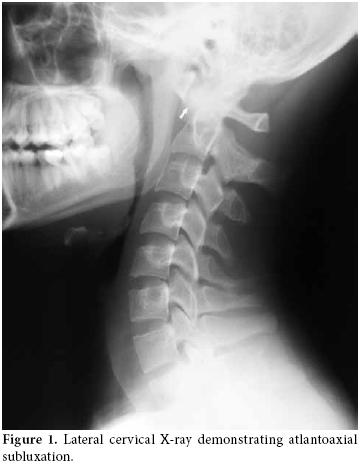 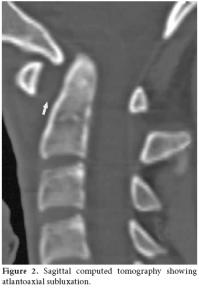 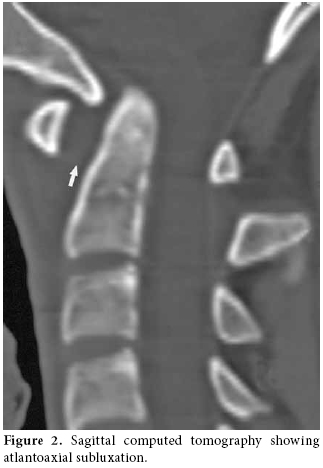 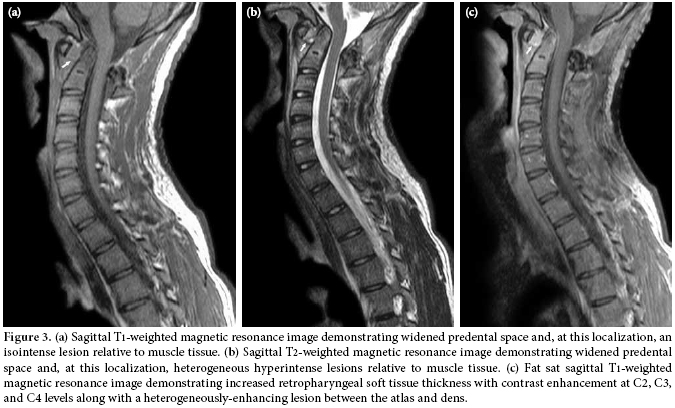 The patient was placed in a Philadelphia collar and received a week-long course of intravenous cefazoline sodium treatment. This was followed four days later by a posterior sublaminar fusion of the cervical 1-2 (C1-C2) with an iliac bone graft and the installation of a cervical hard collar for three months. An intraoperative biopsy was planned to confirm the diagnosis and to rule out the possibility of tuberculoma. A pathological examination showed a non-specific inflammatory reaction associated with Grisel's syndrome. Adequate stabilization could not be achieved by the operation. The patient consulted with otolaryngologists who recommended he receive intravenous ampicillin-sulbactam treatment for four weeks. The treatment was increased to 12 weeks with the use of oral antibiotics. At his one-year follow-up, the patient was asymptomatic but showed a moderate restriction for rotation movement of the neck. This patient's plain radiographs and CT scan showed a reduction of the atlantoaxial subluxation.

Grisel's syndrome refers only to non-traumatic atlantoaxial subluxation. It is a rare complication of a head or neck infection or an otolaryngological procedure, including tonsillectomy, adenoidectomy, mastoidectomy, choanal atresia repair, and cleft palate repair.[4] The underlying mechanism is unknown, but a hematogenous spread of infection from the posterior pharynx to the cervical spine with hyperemia and abnormal relaxation of the atlantoaxial ligaments is a widely accepted theory.[5] Because of the direct connection with the periodontoid venous plexus, the pharyngovertebral veins may provide a hematogenous route for the transport of peripharyngeal septic exudates to the upper cervical spinal structures thus providing an anatomical explanation for the atlantoaxial hyperemia reported in Grisel's syndrome. The primary stabilizer of the atlantoaxial joint is transverse, and the secondary stabilizers are the alar ligaments.[4] Nasopharyngeal inflammation causes hyperaemia that may weaken the transverse and alar ligaments and the articular capsules resulting in atlantoaxial instability. The classic location of Grisel's syndrome is at the atlantoaxial joint.[6] However Martínez-Lage et al.[7] reported a child who presented with clinical manifestations of Grisel's syndrome but who had a C2-3 subluxation. Lopes and Li.[8] also reported a symptomatic variant of Grisel's syndrome occurring at the C3-4 region. Characteristically, the syndrome has almost exclusively been reported in children; however, infrequent adult cases do occur.[9] There is no sex predominance.[10] Grisel's syndrome often affects patients with Down's syndrome[11] and may also occur as a result of rheumatoid inflammation or Marfan's syndrome.[12,13]

A patient's history and clinical signs are important clues for the diagnosis. They generally complain about progressive throat and neck pain upon attempted motion. The nuchal pain radiates to the head or ears, and the head is held immobile in a pathological position (known as the “cock-robin” position) in which the head is tilted and the chin is rotated away from the affected side.[10] Trismus, decreased hearing, and facial asymmetry with restricted cervical motion (especially in neglected cases) have also been described. Typically, there is an antecedent of previous upper respiratory tract infection or of a surgical procedure involving the neck.[6,14] The infection may be so unimportant, or so remote, as to go unnoticed by the parents. Three clinical signs define the diagnosis of an atlantoaxial rotary subluxation. The first consists of the palpable deviation of the spinous process of the axis in the same direction of head rotation. In normal head rotation, the process of C2 deviates to the opposite side. The second is the spasm of the ipsilateral sternocleidomastoid muscle that the patient exhibits to avoid pain.[15] The third sign is the inability to turn the head beyond the midline in the direction opposite to that of the injury.[6,16] In our case, the patient had all of the clinical findings associated with Grisel's syndrome. Neurological complications can occur in approximately 15% of the cases, and these range from radiculopathy to myelopathy and sudden death. Biochemistry is nondiagnostic, blood cultures are mostly negative, and an ESR is often elevated.[14]

Radiological investigation plays an important role in the diagnosis. Plain anteroposterior and lateral radiographs may show asymmetry of the facet joints and increased predental space.[8] Both CT scanning and MRI are diagnostically used.[10] In our case, retropharyngeal soft tissue swelling was demonstrated. Dynamic studies may be necessary, but they may cause neurological complications.[14]

Differential diagnosis should be established against muscular torticollis, tumors of the posterior fossa and spinal cord, chiari malformation, syringomyelia, vertebral neoplasms, and fractures of the C1-C2 segment.[15]

Subluxation of the atlantoaxial joint is graded using the classification system developed by Fielding et al.[17] The atlas is rotated on the odontoid, and there is no anterior displacement of the atlas in type I. In type II, the atlas is rotated on one lateral articular process with 3 to 5 mm of anterior atlas displacement. Type III consists of rotation of the atlas with anterior displacement greater than 5 mm. Type IV is characterised by rotation and posterior displacement of the atlas. Our case was classified as Fielding type III. The first step of the treatment is medical. The main goals of the therapy are a bacteriological cure, bone stability, and neurological treatment.[14] Intravenous antibiotics should be started for a minimum of four weeks, and there are strong recommendation for six weeks. As the grade of subluxation increases, surgery as a treatment becomes more necessary. In a more recent review by Wietzel, the authors suggest treatment of type I with a soft collar, type II with a hard collar, type III with a halo fixation, and type IV with open fixation.[16] Surgery is indicated only in cases of failed conservative treatment, recurrences of the subluxation, and for irreducible subluxations. Neurosurgical intervention usually involves open reduction of the deformity, and cervical fusion with a bone graft. Based on the clinical and radiological findings, we diagnosed the patient as having Grisel's syndrome and treated him with intravenous antibiotics and internal immobilization.

In conclusion, Grisel's syndrome is a rare complication of upper cervical infections and otolaryngology procedures. Early diagnosis and early treatment are fundamental for a better prognosis of Grisel's syndrome. The physician should be aware of this uncommon but potentially dangerous entity. Grisel's syndrome must be taken under consideration in patients with acute torticollis following either an infection or operative procedure in the upper aerodigestive tract.