Results: The distributions of BsmI, TaqI and FokI, alleles/genotypes frequencies were similar in patients and controls. There were no significant differences between the vitamin D receptor genotypes/alleles and the presence or absence of erosions and rheumatoid factor.

Rheumatoid arthritis (RA) is a chronic inflammatory disease characterized by a distinctive pattern of joint involvement and joint destruction. Rheumatoid arthritis pathogenesis involves both genetic and environmental factors, but the complete etiological picture remains unclear. The genetic basis of RA is quite complex. Genetic factors contribute 50 to 60% to the risk of developing RA.[1]

Vitamin D (VD) is a potent regulator of calcium homeostasis and plays a role in immune regulation and inflammation.[2,3] A significant association between VD insufficiency and an increased incidence of autoimmune disorders has been determined.[4] In addition, a significant clinical improvement was shown in the VD- treated patients with RA.[5] Vitamin D receptor (VDR) has been demonstrated in the rheumatoid synovium and sites of cartilage erosion in patients with RA.[4] Vitamin D receptor agonists have a critical physiological role in the regulation of the immune system.[6,7] The role of VDR polymorphisms in RA has been studied by several investigators. There are controversial results in various reports due to ethnicities, extensive geographic variations and possibly study designs.[8-12]

Patients
We studied VDR genetic polymorphisms in 98 RA patients (78 females and 20 males; mean age 50.8±12.3 years; range 38 to 63 years) and 122 healthy hospital workers (96 females and 26 males; mean age 57.1±6.1 years; range 51 to 63 years) who had taken part in our previous studies.[13,14] All patients were registered at the outpatient clinic of İstanbul University, Cerrahpaşa Medical Faculty, Rheumatology Department, and they fulfilled the American College of Rheumatology (ACR) classification criteria for the diagnosis of RA.[15] In general, patients with elevated RF and anti-cyclic citrullinated peptide (anti-CCP) have more severe disease. Although it is known that anti-CCP is more sensitive and has a more specific parameter than RF, we have only the RF results as a part of our previous study. Rheumatoid factor was known in 92 RA patients and, among these, 58 (63%) had positive RF. Hand and feet X-rays were available in 74 of the patients and, among these, 51 (69%) had erosions. The healthy group had no history of any rheumatologic disorder. This study protocol was approved by the Ethics Committee of İstanbul University, Cerrahpaşa Medical Faculty and written informed consent was obtained from each subject.

Statistical analysis
Statistical analysis was performed by Epi Info Software Version 3.2.2 (CDC, Atlanta GA, USA). The distributions of BsmI, TaqI and FokI polymorphisms in the VDR gene between RA patients and healthy controls were compared using the chi-square or Fischer's exact test. P value less than 0.05 was considered significant. The genotype distribution and Hardy-Weinberg equilibrium were tested with the chisquare test for quality of fit, Arlequin software version 2000, (University of Geneva, Switzerland).

The demographic characteristics of RA patients and healthy controls are given in Table 1. The distributions of alleles and genotypes frequencies of BsmI, TaqI and FokI polymorphisms of VDR gene in RA and controls are given in Table 2. The frequencies of F, T and B allele were higher while that of the f, t, b allele were lower among RA patients in comparison to controls, but no associations were found between these alleles and RA (p=0.10, 0.06, and 0.11, respectively). No significant differences in the distribution of the VDR genotypes between RA and controls were observed. The frequencies of BsmI, TaqI and FokI alleles/genotypes were similar among patients regardless of RF positivity and presence or absence of erosions (Table 3). There were no significant differences between the VDR genotypes/alleles and presence or absence of erosions and RF. 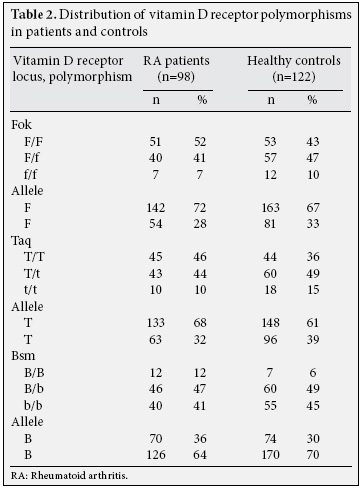 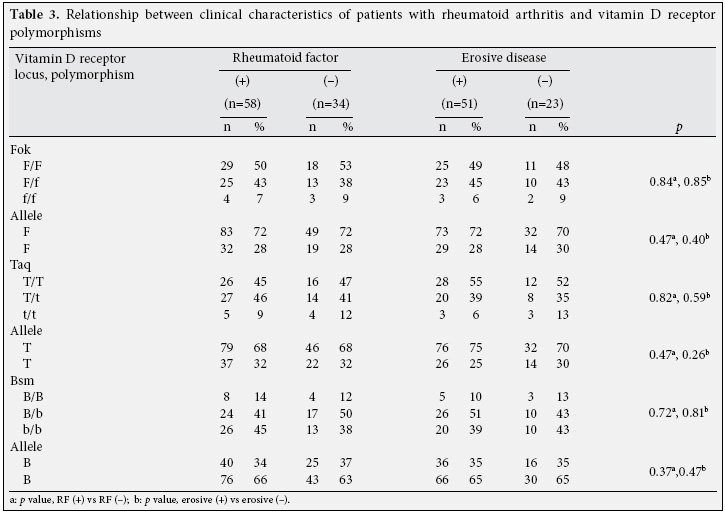 There have been several studies on the possible association of RA, clinical manifestations of RA, and VDR polymorphisms. The results have been controversial due to ethnicities and geographic variations.[8-12] In addition, the age groups of the subjects and the sample sizes of these studies may account for the contradictory results. The present study evaluated for the first time the possible association of VDR polymorphisms among a group of Turkish RA patients.

The study results showed that only 63% of the patients with RA were positive for RF. Similarly, in the Baran et al.[18] study, the results were 59 percent. These results could be explained as RF may present less sensitive results in the activity of disease. Anti-CCP can be a better prognostic factor as shown in various studies.[19-20] However, we have only the RF results as a part of our previous study.

In summary, in several studies, similar to our findings, no significant associations have been found between RA and VDR polymorphisms except for FokI polymorphism which was significantly associated with RA in a French population.[9] These results reflect that TaqI, FokI, BsmI and ApaI polymorphisms in the VDR gene may not be responsible for the primary disease association. Because there are controversial results in various reports, additional studies are needed to elucidate the possible association between the VDR gene and clinical features of RA including other polymorphisms in the VDR gene such as Cdx2 polymorphism. These controversial results could be due to heterogeneity between populations and the small number of samples used in the studies. Not forgetting the small sample size of our study, the present data suggests that VDR polymorphisms do not play a role either in RA susceptibility or in RF positivity and erosive disease of RA in a group of Turkish population.

Acknowledgement
The authors thank Vedat Hamuryudan for the critical review of the manuscript and the kind assistance in obtaining the patient sample.