Objectives: This study aims to evaluate the growth and development in patients with Familial Mediterranean fever (FMF) resistant to colchicine treatment.

Patients and methods: Eighty-seven patients (45 females, 42 males; mean age 9.6±3.8 years; range 2 to 17 years) diagnosed with FMF according to Tel Hashomer criteria in the Pediatric Nephrology Department of Ege University Faculty of Medicine were included in the study. All patients had leukocytosis and elevated C-reactive protein, fibrinojen levels, erythrocyte sedimentation rate and serum amyloid A levels during attacks. The patients were divided into two groups according to colchicine treatment response. Twenty-seven patients (13 girls, 14 boys; mean age; 9.9±3.2 years) having frequent attacks (>1 attact/3 month) despite receiving 2 mg/day colchicine treatment were defined as colchicine-resistant. Sixty patients were defined as colchicine treatment responders. Anthropometric evaluations of the patients were performed at diagnosis and at the end of the follow-up. The height and weight Z scores of patients were used as growth parameters.

Results: No statistically significant difference in mutation frequency was found between the groups. There were no significant differences between both groups in the weight and height Z scores calculated from the anthropometric parameters detected at the diagnosis. In the evaluation performed at the end of the follow-up, we found that the height and weight score for age and the body mass index Z score were significantly decreased in the colchicine resistance group (p=0.008, p=0.013, p=0.027).

Based on MEFV mutation carrier frequency and penetrance studies, it is estimated that around 100.000 individuals from the population-at-risk experience FMF attacks.[3] Currently accepted risk factors for more severe disease and development of amyloidosis are homozygosity to the M694V mutation and to the complex allele V726A-E148Q of MEFV, and male gender.[4-6]

Colchicine is the mainstay of FMF treatment because it reduces attack frequency and duration in most patients.[7] In children, the evidence for the effectiveness of colchicine comes from open-label studies.[8,9] Long-term application of colchicine led to complete remission in approximately two thirds and partial remission in approximately one third of patients with FMF. Almost 5% of patients did not respond to this treatment.[9,10] The dose of colchicine used varied between 1 to 2 mg/day. Prior studies reported that 0.5 mg/day of colchicine in children <5 years of age, 1 mg/day for children between five and 10 years of age, and 1.5 mg/day for children >10 years of age was successful in the majority of children.[11,12] Failure to respond to 2 mg/day usually predicts a failure of higher doses which also increases the risk of drug toxicity.[10,13]

Substantial subclinical inflammation occurs widely and over prolonged periods in patients with FMF,[14] and young patients with chronic inflammatory disease are predisposed to associated growth retardation. Serum amyloid A (SAA) is sensitive for detecting inflammation in such patients.[15] Colchicine therapy prevents recurrent attacks and subclinical inflammation. It also improves growth parameters in FMF patients. Previous studies have shown that colchicine therapy improved growth parameters in children.[16-19] On the other hand, the effect of colchicine treatment resistance on growth and development has not been analyzed.

The aim of the present study was to investigate the effect of colchicine treatment resistance on growth parameters of patients with FMF.

Eighty-seven FMF patients (45 girls, 42 boys; mean age 9.6±3.8 years; range 2 to 17 years) enrolled in the Medical School of the Ege University Pediatric Nephrology Department, Turkey were included in the study which was approved by the local ethical committee. All patients fulfilled the Tel Hashomer criteria for FMF.[20] Resistance to colchicine therapy was defined as suffering from an attack at any typical site more than once in three months while adhering to a colchicine regimen of 2 mg/day.[21]

All subjects' weights and heights were measured, and the weight and height standard deviation (SD) scores and body mass index (BMI) were calculated. Body mass index was determined by dividing weight into kilograms by the square of the patients' height in meters. Demographic features, weight, height and BMI scores were recorded and compared for each group before and after colchicine treatment. Patients were considered malnourished when BMI was below the fifth percentile for chronological age, and height/age, weight/age, weight/height, and height/age were below −2 Z-scores for chronological age.

Mediterranean fever gene analysis
Using blood samples from all patients in both groups, the MEVF gene mutation analysis was performed on 10; 5, 3, 2 exons of the gene by direct DNA sequence analysis after PCR. The mutation analysis findings were correlated with the clinical data in the colchicineresistant and colchicine-responsive groups.

The mean follow up time was 55.2±26.1 months (range 24 to 132). The mean age at onset of FMF attacks was 7.1±3.9 years. The delay in diagnosis was 2.83±2.5 years. Forty-eight patients (55%) were aware of at least one additional affected family member. Abdominal attacks presented in 83% of all patients. Articular involvement (arthritis and/or arthralgia) was seen in 45 of 87 patients (51.7%). Five patients had isolated febrile attacks while six had chest pain. Erysipelas-like erythema was seen in four patients. Abdominal pain along with fever and arthritis was detected more in the colchicine-resistant group than the colchicineresponsive group at the onset of disease (22.7% versus 6.7%, respectively; p=0.03). Demographic, clinical and laboratory features of all patients are shown in table 1.

Table 1. Demographic, clinical and laboratory features of Familial Mediterranean fever in all groups
× 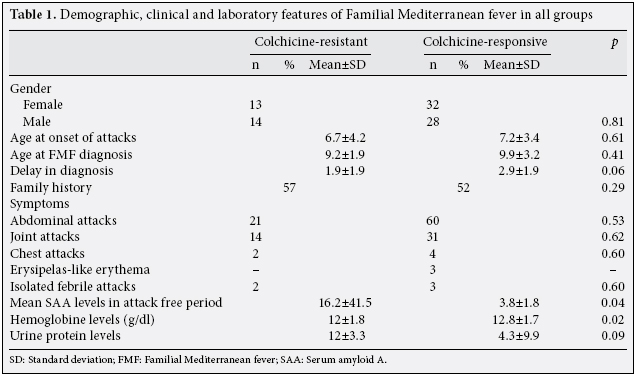 Increased CRP, erythrocyte sedimentation rate, fibrinogen and SAA levels were detected in all patients during attack periods. At the end of this study, the frequency of proteinuria (22%) was similar in both groups while anemia was significantly more prevalent in the colchicine-resistant group (33% versus 11.7%, p=0.016). In attack free periods, the mean SAA levels of the colchicine-resistant group was higher than normal values (<3.3 mg/dl).

Table 2. Evaluation of the anthropometric parameters at the time of diagnosis and at the end of treatment
×

Table 3. Distribution of MEFV mutated alleles in all groups
× 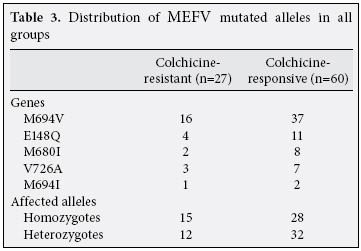 Familial Mediterranean fever is an autosomalrecessive auto-inflammatory disease characterized by recurrent, self-limiting attacks of fever and serositis including arthritis or erysipelas-like erythema in some individuals.[1,20,22] Colchicine is a very effective drug in treating FMF and it prevents febrile attacks and amyloidosis in both children and adults.[7,9] However, approximately 5-10% of patients are colchicineresistant.[21]

Previous studies showed that many chronic, childhood inflammatory diseases are associated with growth retardation coupled with elevated levels of inflammatory cytokines such as interleukin-6 (IL-6), tumor necrosis factor-alpha (TNF-α) and interleukin-1b (IL-1b).[23,24] Pro-inflammatory cytokines may modulate growth patterns in children with inflammatory diseases through both systemic and local effects of the GH/IGF-1 axes.[23] Elevated levels of circulating IL-6 have been observed in children suffering from inflammatory disease such as juvenile idiopathic arthritis.[25] These patients show reduced circulating IGF-1 levels with unchanged GH levels.[26] The proinflammatory cytokine IL-6 which caused systemic effects on growth have been examined using the NSE/ hIL-6 transgenic murine model which overexpresses IL-6. Elevated circulating IL-6 and growth retardation are observed in these mice.[27] Colchicine treatment resistance in patients with FMF is associated with clinical and subclinical inflammation. Serum amyloid A is sensitive for detecting inflammation in such patients.[15] Previous studies showed that effective use of colchicines correlated with normal growth in children with FMF.[9,17,19,28] Zung et al.[18] found that colchicine therapy had a positive effect on both height and weight parameters in children with FMF. Also, Türkmen et al.[16] found that BMI increased during colchicine therapy in their patients. In this context, this is the first study reflecting the influence of colchicine treatment resistance on growth and development in children. We showed that growth parameters (height, weight, and BMI) were significantly lower in the colchicineresistant group than the colchicine-responsive group (p=0.008, p=0.013, p=0.027, respectively; Table 2). We also determined that mean SAA levels were higher in the colchicine-resistant group than in the colchicineresponsive group in both the attack period and attackfree period. We believe that the sustained inflammation due to inadequate colchicine efficacy may explain growth impairment in these patients.

Özen et al.[29] showed that the presence of MEFV mutations are predisposed to certain inflammatory diseases. Grimaldi et al.[30] showed that the M694V allele was related to developing acute myocardial infarction. The M694V allele is also related to severe phenotypes including amyloidosis.[31-33] The frequency of homozygotes with two M694V mutations was higher in the colchicine-resistant group (37% versus 18.3%), albeit insignificantly. It was suggested that M694V homozygote mutation may have a tendency for inadequacy of colchicine therapy. Lidar et al.[21] showed the allelic homogeneity in colchicine responders and non-responders. We also observed that the distribution MEFV mutations was similar among the groups (Table 3). These results suggest that abnormality in colchicine therapy is distinct from the genetic defect of FMF.

In conclusion, we have demonstrated that colchicine unresponsiveness does not reduce frequency and severity of attacks. Also, colchicine-resistance causes growth impairment because of persistent clinical and subclinical inflammation. Even though colchicine is an effective drug in FMF treatment, FMF patients with colchicine resistance must be recognized in the early period of disease and treatment arranged accordingly.