Fibromyalgia Syndrome in Patients with Chronic Low Back Pain

Results: The diagnosis of FMS was estabilished in 15 of 55 (27.3%) patients with CLBP according to American College of Rheumatology criteria. VAS and HAQ scores were higher (p=0.014 and p=0.017 respectively), energy level of NHP was lower (p=0.009) in patients with FMS when they were compared to patients with only CLBP. There were not any significant differences in BDI between groups.

Conclusion: The VAS scores of patients with CLBP and FMS were higher and energy levels of this group were lower. These results should be considered while making treatment programs. (Turk J Rheumatol 2010; 25: 37-40)

Low back pain is the second common reason for referral to physician after upper respiratory tract infections[1]. 60-70% of the people suffers from low back pain in a period of their life and 7-10% of low back pain becomes chronic and leads to major economic burden on health care[2,3]. The studies revealed that, chronic low back pain (CLBP) could not be explained by a single etiology and clinical, psychological, psychosocial and cultural factors may contribute to CLBP[4]. On the other hand, fibromyalgia syndrome (FMS) is a chronic pain syndrome with unclear etiopathogenesis which has prevalence of 2-4%, and diagnosed by history of chronic pain and presence of tender points[5]. According to our clinical experience; we observed that widespread musculoskeletal pain was common in patients with CLBP and FMS could accompany in some patients. However, there were few studies in the literature that investigate the prevalence of FMS in patients with CLBP. The aim of the study was to investigate the frequency of FMS in CLBP and compare the clinical characteristics of these patients with patients who had only CLBP.

Fifty-five consecutive patients who applied to low-pack pain outpatient clinic with degenerative or mechanical CLBP were enrolled to study during July 2006-February 2007. The patients were between the ages of 30-60 and had mechanical type CLBP at least for 3 months. Patients with acute-subacute radiculopathy, pregnancy, infection, malignancy and fracture induced low back pain, inflammatory type of back pain and previous lumbar surgery were excluded from the study.

The patients were diagnosed as FMS by 1990 ACR Fibromyalgia Classification Criteria[5]. According to this criteria; patients with widespread pain which has been present for at least 3 months and presence of 11 of 18 tender points on digital palpation was accepted as FMS. The widespread pain was considered as pain in the left and right side of the body, pain above and below the waist. Aditionaly, axial skeletal pain (cervical spine or anterior chest or thoracic spine or low back) should be present. Digital palpation was performed with an approximate force of 4 kg. For a tender point to be considered “positive” the subject must state that the palpation was painful. Eighteen tender points were; the suboccipital muscle insertions, the anterior aspects of the intertransverse spaces at C5-C7, the midpoint of the upper border of trapezius muscle, origins of supraspinatus muscle above the scapula spine near the medial border, second rib at the second costochondral junctions, just lateral to the junctions on upper surfaces, lateral epicondyle at 2 cm distal to the epicondyle, gluteal region in upper outer quadrants of buttocks in anterior fold of muscle, greater trochanter, medial fat pad proximal to the knee joint line bilaterally. Two blinded physicians independently provided FMS diagnosis according to history and physical examination. The patients who were diagnosed as FMS commonly by two different physicians were accepted as patients with FMS and CLBP.

The statistical analyses were performed with Statistical Package for the Social Science Program (SPSS Version 12.0). The main characteristics of patients were evaluated by descriptive statistics. Difference between mean values was analyzed by Mann Whitney U, and categorical values were analyzed by chi-square test. P values lower than 0.05 was accepted as statistically significant.

The study protocol was approved by the local ethics committee and all patients gave written consent for participating in the study.

The first physician diagnosed 15 and second physician diagnosed 16 FMS patients within 55 patients. In the final analysis it was determined that 15 patients were common in both of the physicians' decisions. In one patient the number of tender points was varied and this patient was not accepted as FMS. The mean age of CLBP was 45.55±11.20 and FMS+ CLBP was 48.20±10.82. All of the patients with FMS+CLBP were females (p=0.04). Fatigue, morning stiffness, paresthesia, neck pain, and number of tender points were significantly higher in FMS+CLBP group (p=0.05, p=0.005, p=0.02, p=0.001, p=0.001, consecutively).

The VAS and HAQ scores were significantly higher (p=0.014, p=0.017) and in the parameter of energy level (EL) which was assessed in the NHP was statistically lower (0.009) in the FMS+CLBP group. The other parameters of NHP apart from EL and BDI were not different between groups. The demographic data, the clinical features and comparison of NHP, HAQ and BDI of the groups were summarized in Table 1, 2 and 3 consecutively. 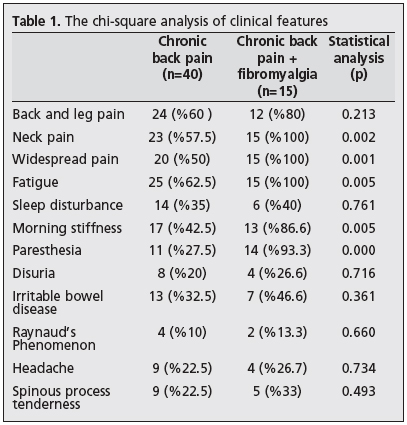 Table 2. The analysis of parameters with Mann Whitney U Test
× 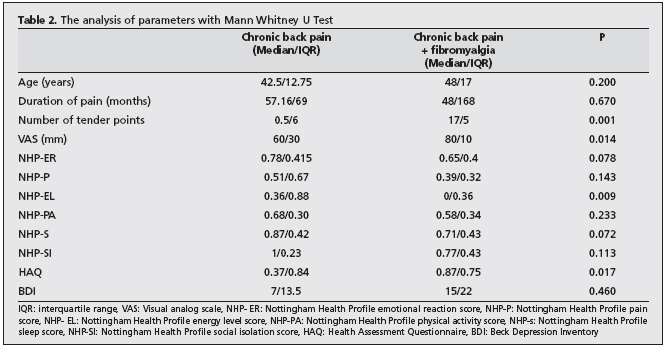 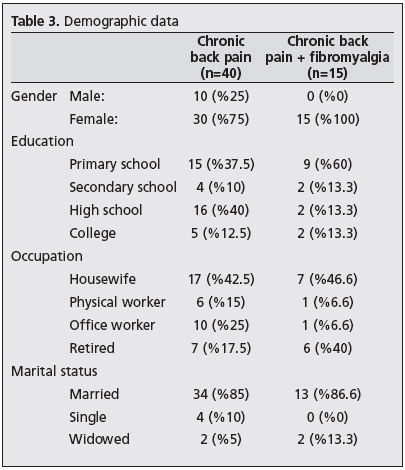 FMS and CLBP lead to burden on health care system more than many rheumatic diseases. Boonen et al.[9] reported that the patients with FMS and CLBP lead to more financial cost than ankilosing spondylitis and well beings of these patients were also worse than patients with ankilosing spondylitis. The basis of our study was related our observations that some patients with CLBP had not been improved and the patient satisfactions were very low despite the all efforts. When files of these patients analyzed it was realized that in an important amount of these patients FMS was also diagnosed before or after CLBP. In study design the main problem was to diagnose FMS in patients with CLBP. As FMS is a complicated syndrome with widespread musculoskeletal pain and various systemic symptoms, the diagnosis is based on exclusion of other causes of joint or muscle pain[10]. On the other hand, FMS sometimes accompany to these causes[11]. Despite there is no gold standard test, there are numerous studies which using widespread pain and tender points for diagnosis. Since the ACR 1990 Criteria for the Classification of Fibromyalgia was constituted by Wolfe et al.[5] It has been used for both in researches and clinical practice. However, there were debates about sensitivity and adequacy of the criteria. Some authors reported that the number of tender points could also be present in society with a high incidence[12,13]. Digital palpation, myalgic scoring and dolorimetry can be used to count tender points. In a study it was found that only digital palpation of these three evaluation methods was correlated with fibromyalgia impact questionnaire score and seemed to be sufficient for assessment[14]. The studies comparing ACR criteria to other diagnostic tools showed that all of these tools had similar clinical utility for diagnosing FMS[15]. With the background of these information, we used ACR criteria for diagnosis and the count of tender points was assessed with digital palpation. For preventing researcher based bias the diagnosis was confirmed by two independent physicians.

As a conclusion the prevalence of CLBP is common among patients with FMS. This concomitance leads to decreased energy levels and increased pain. We believe that these results should be taken into account before a rehabilitation program. Management strategies that focus on increasing patients' energy levels such as cognitive therapy may be beneficial to decrease pain levels and increase quality of life. But these suggestions remain to be proven by future clinical trials.

Conflict of Interest
No conflict of interest is declared by the authors.