Coexistence of Psoriatic Spondyloarthropathy and Gout: A Case Report

We present a 60-year-old male patient who had concurrent psoriatic spondyloarthropathy and gout, which has not been reported in the literature previously. In this paper, the clinical and radiological features of both rheumatic diseases are discussed in light of the recent literature. (Turk J Rheumatol 2009; 24: 159-62)

Psoriatic spondyloarthropathy (PsSpA) is only seen in 20-40% of the patients and seldom detected at the psoriatic arthritis (PsA) onset; it generally emerges in late periods of the disease. The involvement of the sacroiliac joints and the cervico-thoraco-lumbar spine seen in PsSpA may resemble ankylosing spondylitis (AS)[1,2]. Gout is a monosodium urate monohydrate crystal depot disease. High serum uric acid levels are required for crystal formation[3]. Although several cases of coexisting PsA and gout have been described in the literature[4-11], PsSpA and gout coexistence was not previously reported.

In this paper, we present the clinical and radiological features of a case that was diagnosed as PsSpA and gout.

A 60-year-old male presented to our clinic with neck and low back pain. It was ascertained that the patient was diagnosed as psoriasis at 13 years of age as a result of the biopsy obtained from the white squamous lesions that appeared on his hairy skin. The patient stated that he received topical treatment for the disease and did not experience an additional problem until he was 30, when he started to feel pain on his front chest wall, neck, and low back (with restriction in low back movements), swelling of the 2nd, 3rd, 4th, and 5th fingers of both hands, night pain, and morning stiffness lasting 1-2 hours. He was prescribed non-steroidal anti-inflammatory drugs (NSAID). With his ongoing NSAID treatment, at the age of 38, he suffered from ankle swelling, severe pain, temperature rise, and functional loss resulting in a diagnosis of gout based on the examinations (monosodium urate monohydrate (MSUM) crystals were identified under compensated polarizing light in the synovial fluid (SF) of the ankle). The patient indicated that he suffered from gout attacks on both ankles and metatarsophalangeal (MTP) joints many times during the next stage with progressively frequent intervals. He also stated that he underwent colchicine therapy throughout the periods of gout attacks, providing improvement in the complaints. When the medical history and the family background of the patient were investigated, the patient was found to have been receiving antihypertensive drugs for four years and he had first-degree relatives with a diagnosis of psoriasis and gout. Additionally, he had been drinking alcohol excessively for two years. Symptoms had been partially relieved with the NSAID and colchicine treatment.

Physical examination of the patient revealed intense psoriatic lesions on the hairy skin and pitting and striations on the nails of both hands. Pain and erythema of the right 1st MTP were detected. No pain, sensitivity, joint movement limitation or gouty arthritis was detected in the other peripheral joints. Enthesopathic points were not sensitive to palpation. The chin to manubrium sterni distance was measured as 7 cm, occiput to wall distance as 11 cm, chest expansion as 2 cm, hand to floor distance as 4.5 cm, dorsal Schober as 1 cm, and the modified lumbar Schober as 4 cm. No extraarticular involvement was detected. 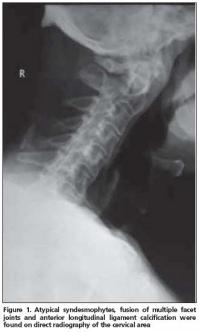 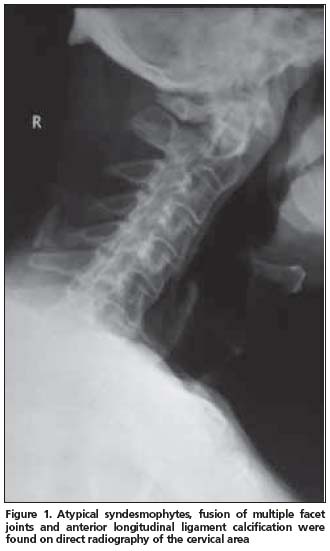 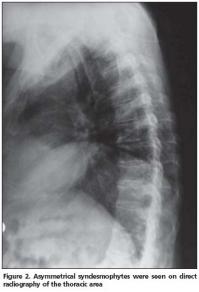 Figure 2. Asymmetrical syndesmophytes were seen on direct radiography of the thoracic area
× 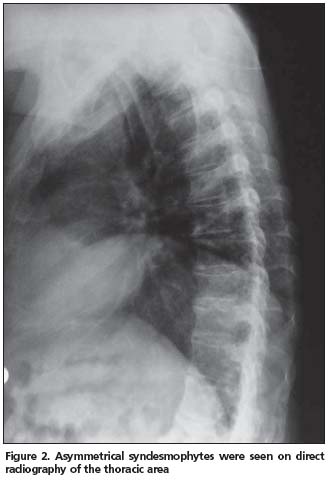 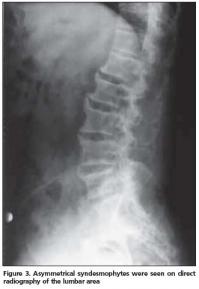 Figure 3. Asymmetrical syndesmophytes were seen on direct radiography of the lumbar area
× 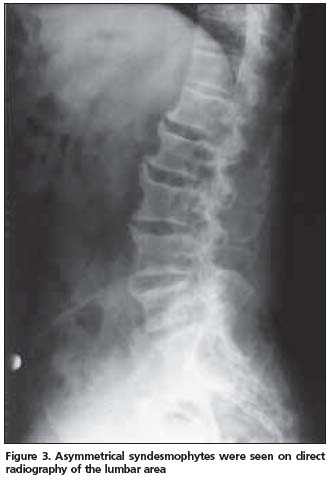 These examinations supported the coexistence of PsSpA and gout in the patient. Physical modalities were applied to the cervical, dorsal and lumbar regions and an exercise program was also administered. A moderate increase was observed in the ranges of movement of the neck along with a decrease in neck and low back pain. While the patient was under our care, several gout attacks were observed on the first MTP joint and the diet of the patient in the intercritical period was regulated; a daily 1 mg/day colchicine and 300 mg/day allopurinol were added to his medications and a follow-up was initiated. Oral sulfasalazine (2 g/day) was then added to his treatment.

PsSpA is observed in 5% of the PsA patients and may be clinically confused with AS[12]. The clinical characteristics of our case also resembled AS. An inflammatory type of low back pain was present and chest expansion was 2 cm. X-rays revealed a predominance of axial involvement. However, a normal sacroiliac joint MRI and lack of a typical syndesmophyte appearance made the AS diagnosis unlikely.

Another striking radiologic finding in our patient was that cervical spine involvement was on the foreground. Queiro et al. reported the cervical spine involvement in HLA-B27- negative PsSpA patients to be 51%[13]. Cervical spine involvement in PsA is known to be seen more commonly in patients presenting with psoriatic lesions on hairy skin[12]. The majority of skin lesions were localized on the hairy skin in our patient. Radiographic abnormalities are not sufficiently sensitive and specific for the diagnosis of gout. Only 45% of patients with gout manifest radiographic bone changes, and then only six to eight years after the initial attack. The radiographic hallmarks of gout are normal mineralization, joint space preservation, sharply marginated erosions with sclerotic borders, overhanging edges, and asymmetric polyarticular distribution[14]. Radiologic evaluation of our patient did not reveal any of these images.

Laboratory examination of our patient showed acute phase reactants in normal ranges. Our patient was assessed to be in the intercritical period; however, he had a history of acute gouty attacks. Acute phase reactants may be within ‘normal range’ during the intercritical period[14]. Rajendran and his colleagues reported that ESR and CRP might be in normal ranges, although PsA is an inflammatory arthritis[2]. HLA-B27 was negative in our patient. In a research conducted by Queiro, HLA-B27 positivity in PsSpA patients was demonstrated to be 34%[13]. The presence of MSUM crystals in SF is the gold standard for the diagnosis of gout. The elevation in uric acid level is a significant laboratory finding for the diagnosis of gout[14]. Our patient’s uric acid level was high and MSUM crystals were detected previously in the SF of the ankle.

Temperature increase, erythema, and sensitivity on the right and first MTP joint were observed during the physical examination of our patient. These findings were also present on both ankles. A diagnosis of gout had been made previously because of the crystal identification in the SF and due to the response to the colchicine therapy. Our patient was in the intercritical period of gout disease. The first joint affected by gout is known to be the first MTP joint, at a rate of 60%[15].

We believe this case report is of significance because it is the first to demonstrate coexistence of PsSpA and gout. Even though these cases are extremely rare, the possibility of this coexistence should be kept in mind.