Objective: We aimed to determine the efficacy of pulsed electromagnetic field therapy on pain and functional level in knee osteoarthritis when compared to therapeutic ultrasound (US) and controls.

Osteoarthritis (OA) is the most common rheumatologic disease and commonly affects the large weight-bearing joints, such as the hips and the knees[1]. Decrease in the content of aggrecan and collagen, and increase in collagenases result with the breakdown and loss of the cartilage of the effected joint[2]. Degeneration and inflammation of the cartilage can stimulate new bone outgrowths to form around the joints. These degenerative changes lead to joint pain, swelling and stiffness[1].

Since no treatment can stop osteoarthritic process, the treatment of knee OA (KOA) has been focused on symptom relief and function improvement. Physical agents such as superficial and deep heat, cold, electrotherapy and exercises have been used alone or in combination for many years[3,4]. However, an opthimal therapy for the management of KOA has not been developed yet. Therapeutic US is one of the most prefered physical agent for the treatment of KOA in routine daily clinical practice although it is not supported by clinical trials and not recommended by EULAR and OARSI guidelines. It is a kind of diathermy (deap heat) delivered by high-frequency sound waves[5]. It relieves pain, decreases muscle spasm, increases collagen extensibility and accelerates metabolic processes[6] by providing temperature elevations up to 4 -5 degree at depths of 8 cm and by micromassage effect[7].

Pulsed electromagnetic field (PEMF) is rarely prefered in the treatment of KOA in clinical practice. The PEMF was initially used in the early 1970s for the treatment of soft tissue injuries[8]. Its most accepted effect is promoting bone and cartilage repair, particularly in case of delayed healing such as non-union fractures[8]. But it has also been used in the treatment of the non-fracture musculoskeletal conditions[9-14]. The action of PEMF is based on creating small electrical fields in tissue and thereby promoting biological effects[15]. Furthermore, PEMF has some advanteges such as non-contact with the skin, has few contrendications and complications, has no detectable thermal effect and it does not take time of the therapist. So it is suggested that, PEMF should be an alternative and attractive therapy choice for KOA. There are few studies investigated the effect of PEMF in KOA. The previous studies were either animal studies[2,16] or sham controlled studies which reported positive effects[17-19]. To our knowledge, the efficacy of PEMF in KOA has not been investigated by comparing it to any physical agent yet. The aim of this study is to investigate the effect of PEMF on pain intensity and functional level of the patients with KOA by comparing to that of therapeutic US therapy and to that of no ttreatment control group.

Sample size
A power analysis indicated that a sample size of 45 patients would provide 80% power at an alpha level of 0.05 (effect size: 0.506).

Patient population
Fiftyfive patients, who admitted with knee pain lasted for at least 3 months were evaluated. Patients were assessed by one of the two authors by history and detailed physical examination. Laboratory tests (whole blood count, C-reactive protein, erythrocyte sedimentation rate, rheumatoid factor and routine biochemical tests) were assessed to rule out secondary OA. All patients were initially questioned for age, sex, weight and height. The diagnosis of KOA was based on the American Collage of Rheumatology criteria[20]. Patients who had not responded adequately to treatment with nonsteroidal anti-inflammatory drugs, had grade II-III Kellgren- Lawrence[21] scores and had no limitation in range of motion were included to the study. Exclusion criteria were as follows: 1.secondary OA, 2. contraindications for PEMF and US therapy such as tuberculosis, pregnancy, malignancy, cardiac pacemaker or any implanted electrical device, atrophic skin or scar tissue on the knee region, bleeding disorders, insensitivity, edema and ischemia, 3. unable to understand the questionnaires. Furthermore patients were excluded from the study if they had been on pyhsical therapy programme or had recieved intraarticular injections in the previous 6 months, had undergone an operation for any knee pathology previously. Eight patients were excluded from the study. Two patients did not participate because of inconsiderable reasons so 45 patients completed the study. All participants gave written informed constant. The study was approved by the ethics commitee of the university.

Figure 1. Flow-diagram of the patients
× 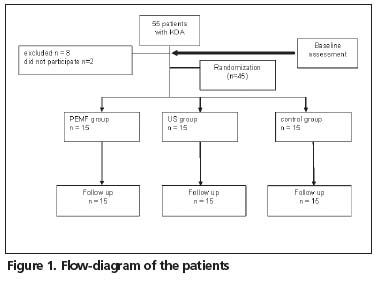 Therapy protocols: PEMF group
PEMF therapy was applied by a magnetotherapy device (BodyMag, manufactured by Eltech S.r.l, Treviso, Italy). Both knee of the patients were put in the middle portion of the big cycle solenoid applicator in supine position. The frequency, intensity and application duration/session were selected according to the recommendations of the manufacturer. PEMF was applied in a frequency of 2 Hz, 100 Hz and 25 Hz, consecutively. Intensity variated between 2mT and 10 mT during the application. A therapy session lasted for 35 minutes and 15 sessions performed during 3 weeks (5 sessions/week).

US therapy group
The skin was coated with an acoustic gel not containing any pharmacologically active substance. US was then applied to the superomedial and lateral parts of the knee by the same therapist stroking the applicator in circular movements. The transducer head was applied to the knee at right angles to sustain maximal absorption of the ultrasound energy. Continuous ultrasonic waves with 1 MHz frequency and 1.5 watt/cm2 power were applied with a 3 cm diameter applicator ultrasound equipment (Chattanooga, TN, USA.). US therapy lasted for 10 minutes/ session.

Third group served as control. Only the third group was allowed to receive paracetamol when needed during the study.

Outcome measures
Severity of joint pain, joint stiffness and physical function levels were evaluated as outcome measures. Assessment tools were Visual Analoge Scale (VAS) (from no pain=0 to unbearable pain=10) and Western Ontario and McMaster Universities (WOMAC) questionnaire. WOMAC is a validated, disease specific and sensitive measurement of symptom related to KOA[22]. It has 3 parts which measures pain, stiffness and physical function. The validity of Turkish version of WOMAC questionnaire has been well documented[23]. WOMAC scores were recorded on a Likert scale of 0 -4, where 0= no pain/ limitation and 4=very severe pain/limitation. Maximum scores for stiffness, pain and physical function were 8, 20 and 68 respectively.

Statistical analysis
Statistical tests were performed by SPSS program (version 11.0). All data was expressed as mean±standard deviation or median (minimum-maximum). Demographic characteristics were compared by χ2 test and ANOVA. Kruskal Wallis test was used in order to compare the differences between changes of scores during time among the groups. For the significant differences according to Kruskal Wallis variance analysis, Mann-Whitney U test was used to analyze which group is different from the other in terms of those parameters. Bonferroni correction was applied for all possible multiple comparisons. Differences within groups were analyzed by Wilcoxon signed rank test.

All of the patients had bilateral KOA. The right knee was evaluated in all patients. 45 patients (63.5±10.2 yrs of age) completed the study. Demographic characteristics are presented in Table 1. No complication has been noted in group I and II. There were no significant differences with respect to age, gender, body mass index, and Kellgren-Lawrence scores among groups. All outcome parameters improved significantly within group I and group II. No change was observed in any outcome measure within group III (Table 2). There were differences among groups regarding the percent change of VAS scores (p<0.001), WOMAC pain scores (p<0.001), WOMAC joint stiffness scores (p=0.013) and WOMAC functional level scores (p<0.001) after the treatments (Table 3). There were no differences between first and second group regarding the improvements in VAS, WOMAC pain, joint stiffness and functional level scores (Table 3).

Table 1. The demographic properties and baseline parameters of the patients (mean±SD)
×

Table 2. The scores of outcome parameters (median) (minimum-maximum) and changes within and between groups
×

In the present study, PEMF therapy has been found to be effective in reducing pain and stiffness and improving functional level in KOA.

There are a few studies which investigated the effectiveness of PEMF in KOA. Benefical effects of PEMF have been presented by either clinical studies[17-19] or animal experiments[2,16] but its efficacy has not been compared to that of another physcial agent yet. Jacobson et al.[19] found 46% improvement in pain reduction in a similar sample size of the patients with KOA. Nicolacis et al.[18] also used WOMAC, and reported that PEMF reduced pain and improved daily living activities. Fischer et al.[15] and Thamsborg et al.[17] reported similar results on pain reduction even for the long-term. The results of the present study are similar to those of recent studies. However the frequency, duration of each session and total number of sessions are different from each other among these studies.

The PEMF has been shown to increase upregulation of gene expression for aggrecan, type II collagen synthesis[24,25] and TGFβ[26-28]. TGFβ stimulates the aggrecan and collagen synthesis, suppresses the pro-enzyme forms of collagenase and interleukin-1[29], which may result with pain reduction. The opthimal frequency, intensity and duration required for the completion of these biological effects and for total recovery in human tissues, are unknown. Recent studies have suggested that PEMF activates cellular signaling process rapidly within few minutes[30,31] and signaling is largely blunted after 30 minutes. So, 35 minutes/session may be sufficient for this process. Further histopathological analysis are needed to find out the opthimal dosage and duration.

In the present study, the improvements in pain relief, joint stiffness and functional level in the PEMF group have not been found superior to those of the US therapy group. Our US application form has been recommended for the restricted movements[32] and pain relief[33]. Improvement in stiffness level of PEMF group should be due to enhanced blood circulation in the periarticular compartment. PEMF has been shown to activate synthesis of nitric oxide[34] which may enhance blood flow. Further studies should analyze long-term results in severe OA with restricted movements.

The effect of US therapy on pain relief in KOA has been documented by several studies[35-37]. The US therapy has been compared to other physical agents such as shortwave diathermy, galvanic or interferancial current[36,38]. According to a meta-analysis, most of them have been reported that therapeutic US is effective but not superior to other physical agents[37]. In the present study, PEMF has been compared to US therapy and similar results for pain relief have been found. There are several limitations of these recent studies such as heterogenous groups, untrastfull validty and reliability of the outcome measures, or lack of a control group. Only one study compared therapeutic US to that of placebo in KOA[38]. US therapy has been found effective on pain and stiffness level but they have found no difference compared to sham[37]. Similar to the others[35,36], dosages were unclear in their study, too.

In conclusion, both therapy approaches were considered effective and PEMF should be used in higher rates in routine clinical practice as an alternative therapy method. For a more definitive answer on the use of PEMF in KOA, larger randomized studies are needed.