Objective: We aimed to determine serum soluble CD30 (sCD30) levels in patients with rheumatoid arthritis (RA) and to analyze their clinical significance in these patients.

Conclusion: The present data suggest a possible involvement of CD30+ T cells in the immune processes of RA. Serum sCD30 levels might be a helpful tool for the evaluation of Th2 activity in RA. However, the relationship between sCD30 and clinical disease activity remains uncertain. Therefore, we suggest the need for further studies to investigate its clinical importance. (Turk J Rheumatol 2009; 24: 131-5)

Rheumatoid arthritis (RA) is a systemic autoimmune disease of unknown etiology and is characterized by a chronic inflammation of the synovial joints, which leads to joint destruction. The etiopathogenesis is still not completely understood; both T cells and B cells become overactive in patients with RA. It has been proposed that T cells play a major role in the immune processes in RA[1]. B cells are also important in the pathologic process and may serve as antigen-presenting cells; they also produce numerous autoantibodies and secrete cytokines[2]. Rh eumatoid inflammation is accepted to be associated with T helper type 1 (Th1)-driven immune response. The two subsets of CD4+T cells defined in terms of cytokine production and their function are Th1 and T helper type 2 (Th2) subsets[3]. The Th1 subset produces interleukin (IL)-2, interferon (IFN)-γ and tumor necrosis factor-α (TNF- α). In contrast, the Th2 subset preferentially produces IL-4, IL-5, IL-6, and IL-10[4].

The synovium is infiltrated by activated Th1 cells producing high levels of IFN-γ, and Th2 cells and their cytokines, in particular IL-4, are rarely found in RA[5,6]. The Th1 cytokine profile was found in the joints of patients with RA, and an imbalance between Th1 and Th2 cells may play a role in the pathogenesis of RA[7].

The CD30 molecule, a member of the TNF superfamily of membrane cytokine receptors, is expressed by activated CD4+T cells predominantly producing Th2 type cytokines in vitro[8]. CD30-expressing activated T cells release an 85 kD soluble form of the molecule (sCD30), which is detectable both in vitro and in vivo[9]. sCD30 is regarded as a sign of the regulatory activity of these T cells[10,11].

High serum concentration of sCD30 associated with increased CD30+ cell numbers in the blood and affected tissue were demonstrated in asthma and atopy, which are Th2-mediated disorders[12,13]. Increased levels of sCD30 were also reported in some Th1-mediated autoimmune diseases such as Hashimoto’s disease, Sjögren syndrome and in both serum and synovial fluid of patients with RA[14-16].

High levels of sCD30 have been reported in peripheral blood and synovial fluid of patients with RA[10,11]. Although increased sCD30 levels were shown in RA, the relationship between sCD30 and disease activity and outcome parameters remains unclear. Therefore, in this study, we aimed to evaluate serum levels of sCD30 molecule in patients with RA and to also analyze their clinical significance in these patients.

Patients were evaluated using routine clinical and laboratory measures, and then the following assessments were made.

Clinical assessment
Morning stiffness duration was given in minutes. Pain during the preceding week was recorded on a visual analog scale (VAS) of 100 mm (0 = no pain, 100 = worst pain). Fatigue was assessed by a 5-point scale (1 = none, 5 = very severe). Patient’s and physician’s general health assessment were made on a VAS of 100 mm (0 = best possible, 100 = worst possible). Disease activity was assessed according to the number of tender and swollen joints (total 28 joints)[18]. Then, for each patient, the disease activity score (DAS28) was also calculated from the number of tender and swollen joints (both by 28-joint-count), erythrocyte sedimentation rate (ESR), and the patient’s general health assessment by VAS[19]. DAS28 score >5.1 indicated high disease activity, whereas a DAS28 score <3.2 indicated low disease activity. Remission is achieved by a DAS28 lower than 2.6 (comparable to the American Rheumatism Association (ARA) remission criteria)[20]. Patients were divided into two groups according to the DAS28 score as having inactive/low disease activity and moderate/high disease activity.

The Turkish version of the health assessment questionnaire (HAQ) was used to evaluate the disability and outcome in patients with RA[21]. The HAQ is a self-administered instrument covering eight categories of daily life: dressing and grooming, arising, eating, walking, hygiene, reach, grip, and activities (each containing two or three items). The highest score for each of the eight areas is summed and divided by 8 to yield, on a continuous scale, a functional disability index between 0 and 3[22].

Presence of extraarticular manifestations such as rheumatoid nodules, anemia, pulmonary interstitial fibrosis, pleuritis, Sjögren’s syndrome, rheumatoid vasculitis, and Felty’s syndrome was recorded. Vasculitis was diagnosed when one of the following symptoms was present: polyneuropathy/mononeuritis multiplex, cutaneous vasculitis, digital gangrene and visceral infarction, not attributable to any disease[23].

Statistical analyses
The data were analyzed by non-parametric statistics. The descriptive values were expressed as mean, median and minimum-maximum. Difference between the patients with RA and the control group was evaluated by Mann- Whitney rank sum test. Correlations were performed using Spearman’s correlation coefficient. Differences between sCD30 and clinical, laboratory and radiological findings were assessed using Mann–Whitney rank sum and chi-square tests.

Table 1. Demographic, clinical, laboratory, and radiographic characteristics of patients with RA and comparison of inactive/low active and moderate/high active groups
× 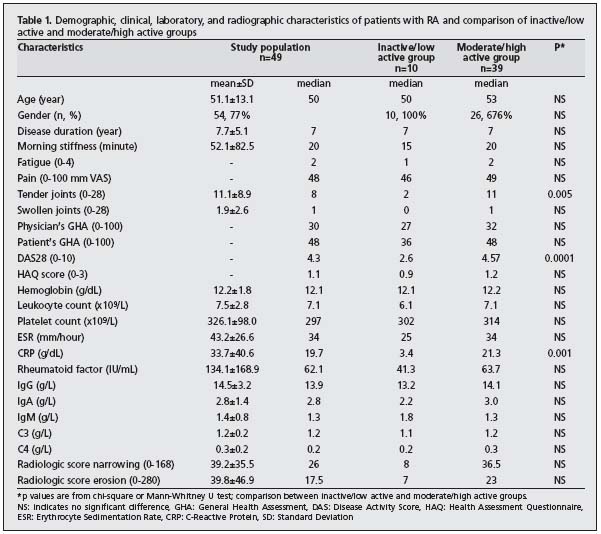 The mean serum level of sCD30 was not different between the inactive/low active and moderate/high active patient groups (p=0.227) (Table 2). 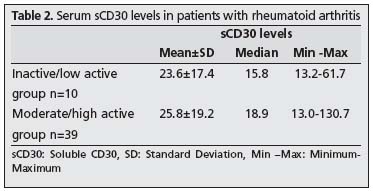 There was no significant association between sCD30 and the other assessed clinical laboratory parameters of disease activity and radiological score (p>0.05).

The aim of this prospective and controlled study was to investigate serum levels of sCD30 in patients with RA and to analyze their clinical significance in these patients.

Three main observations can be reported from this study. First, serum sCD30 levels were higher in patients with RA than healthy controls. These results are parallel with the findings of other studies[10,11]. It has also been found that serum sCD30 values were higher in active than in inactive RA patients[15,25]. These studies support the data indicating that raised levels of sCD30 may reflect the presence of immune response characterized by the activation of Th2 cells. In our study, patients had moderately active disease activity with respect to clinical, laboratory and radiologic values. However, sCD30 levels were not significantly higher in the moderate/high active patient group than in the inactive/low active patient group.

Interestingly, Gerli et al.[10] found an inverse correlation between sCD30 and CRP serum values at baseline, but not during follow-up. They also found that sCD30 levels were higher in early RA versus late RA, and sCD30 levels positively correlated with a good response to second- line therapy. They attributed this result to the fact that low levels of CRP expression may be indicative of low production of proinflammatory cytokines, and the inverse correlation between sCD30 and CRP may reflect a downregulatory activity on inflammation exerted by this T-cell subset during the early phases of RA synovitis.

Our second result is that higher sCD30 levels correlated with extraarticular manifestations in the patients. Anemia was predominantly high in our population. The degree of anemia supports the activity of the underlying disease, particularly the severity of articular inflammation in RA. Thirteen percent of patients had subcutaneous nodule, which is thought to occur as a result of small vessel vasculitis with fibrinoid necrosis. Schönermarck et al.[26] and Wang et al.[27] reported that increased sCD30 levels were found in active generalized small vessel vasculitis such as Wegener granulomatosis and Church Strauss syndrome.

Our third result is that aside from physician’s general heath assessment, there was no significant correlation between sCD30 levels and the other assessed disease activity parameters, such as the number of involved joints, pain, morning stiffness duration, RF, ESR, and radiological score, although a number of studies have shown that elevated sCD30 levels were associated with active disease in RA[15,25]. The correlation between sCD30 and physician’s general health assessment score should be confirmed by further studies involving much larger sample sizes. Ichikawa et al.[28] reported that sCD30 levels were not associated with any disease parameter in RA.

In the present study, serum sCD30 levels were not associated with the disease outcome parameter, the HAQ, which was used to assess disability. We did not find any study investigating the relationship between sCD30 and outcome and disability; therefore, the present work is the first such study to look into the relationship between sCD30 and disability. Savolainen et al.[25] showed that serum sCD30 levels were higher in RA and undifferentiated arthritis than in controls at baseline, but serum sCD30 levels did not predict remission at one-year follow-up in their series. Similarly, Abdulamir et al.[29] studied the role of the regulatory T cells, CD4+CD25+ and CD4+CD30+ cells, in the pathogenesis of asthma and their association with apoptosis and NF-kappaB in patients with asthma. They found that CD4+CD30+ cells were associated with the pathogenesis of asthma but not with severity.

Several factors limit the generalization of our results, including population size, disease activity and severity, disease duration, lack of medical treatment data, and lack of a different and challenging control group. Therefore, further validation of these results is needed with larger and more homogeneous populations.

In conclusion, these data suggest a possible involvement of CD30+ T cells in the immune processes of RA. Since sCD30 is released by activated Th2 cells, increased levels of sCD30 may reflect the presence of immune responses characterized by Th2 cells and play a possible role in the immunopathogenesis of RA. Hence, serum sCD30 levels might be a helpful tool for the evaluation of Th2 activity in RA. Based on the results of the present study, it should also be noted that the relationship between sCD30 and clinical disease activity remains uncertain, and further studies are needed to investigate and explore its clinical importance.