Results: Red swollen joints and proteinuria were first observed in PC after the 12th week. After treatment, T, MP, and T+MP showed relieved red swollen joints and splenomegaly, as well as decreased urine protein, anti-dsDNA, IL-6, IFN-γ, Treg cells, pathological scores, and hyperplasia of mesangial matrix in glomeruli compared with PC. The IFN regulatory factor 7 level was higher in T+MP (p0.05) and MP (p>0.05) than in PC after treatment. The expression of suppressor of cytokine signaling (SOCS) 1 was lower in T (p>0.05), T+MP (p0.05) than in PC. The SOCS3 level was higher in T (p>0.05) and T+MP (p0.05) than in PC.

Conclusion: Tofacitinib can ameliorate glomerulonephritis and arthritis in a pristane-induced murine model of lupus. SOCS3 gene may be involved in the therapeutic mechanism of tofacitinib.

Systemic lupus erythematosus (SLE) is a chronic autoimmune disease (AID) that affects many organs. Approximately 40 to 60% of patients with SLE exhibit renal symptoms and lupus nephritis.[1]

The Janus kinase (JAK) signal transducer and activator of transcription (STAT) signaling pathway exhibits aberrant STAT signaling under inflammatory conditions and AIDs, including SLE.[2] In contrast to healthy controls, the peripheral blood mononuclear cells of patients with SLE show constitutive JAK1 and STAT2 phosphorylation even in the absence of disease activities.[3] Many inflammatory cells and factors are related to the STAT signaling pathway. In AIDs such as SLE, the production of chronic type 1 interferon (IFN) is partly perpetuated by the improper regulation or persistent stimulation of antigen-presenting cells, including plasmacytoid dendritic cells, immune complexes, and damageassociated molecular-pattern molecules. Persistent type 1 IFN exposure increases the effector function of T and B cells, leading to autoantibody production, and ultimately, AID. IFN-mediated priming can contribute to increased cell activation and responsiveness to inflammatory factors. The transcript and total STAT1 protein levels in T and B cells significantly increase in SLE mouse models and patients with SLE, suggesting the involvement of augmented STAT1 signaling in response to IFNs.[4] T cells from patients with SLE exhibit increased levels of total and phosphorylated STAT3.[5] STAT3 is believed to play a crucial role in T cell differentiation into T helper 17 and T follicular helper cells, which aid B cells within the germinal center.[6] Moreover, the increased STAT5 signaling in lupus T cells is related to changes in circulating cluster of differentiation (CD4+T cell subsets and correlated with aggressive diseases.[7]

The JAK-STAT pathway plays a role in SLE pathogenesis. Inhibiting this pathway may be a promising therapeutic strategy for SLE. Following the success in treating rheumatoid arthritis (RA),[8] tofacitinib, the first oral small molecule JAK inhibitor of the pathway, is extensively investigated due to its potential effects on AIDs.

In a phase II trial of non-severe SLE, baricitinib, a JAK1/JAK2 inhibitor, has led to significantly increased clinical responses, particularly improvements in skin and joint disease.[9]

In this study, we aimed to investigate the effectiveness of tofacitinib, a JAK1/JAK3 inhibitor, in treating murine lupus, and also explore 12 related genes downstream of JAK-STAT signaling pathways to find the underlying mechanism.

Body weight and leg joint diameter were measured every four weeks. At the end of the 32nd week, the mice were sacrificed, and their spleen and kidney size and weight were measured.

Kidney samples were harvested from the sacrificed mice and stained with hematoxylin-eosin (H-E) and periodic acid-Schiff (PAS). H-E-stained sections were graded semi-quantitatively for glomerular lesion score based on the following scheme: normal glomerulus, 0; focal, mild, or early proliferative, 1; multifocal proliferative with increased matrix and inflammatory cells, 2; diffuse proliferative, 3; and extensive sclerosis/ crescents, 4. Forty glomeruli were scored for each mouse, and the average was taken.[11]

Red swollen joints and proteinuria were first observed in PC after the 12th week. Thus, the model of murine lupus was successfully established (Figure 1). 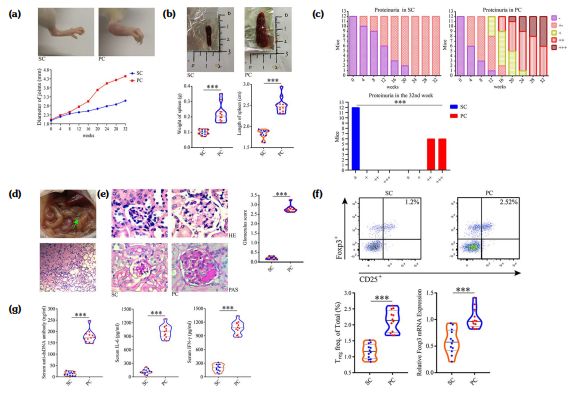 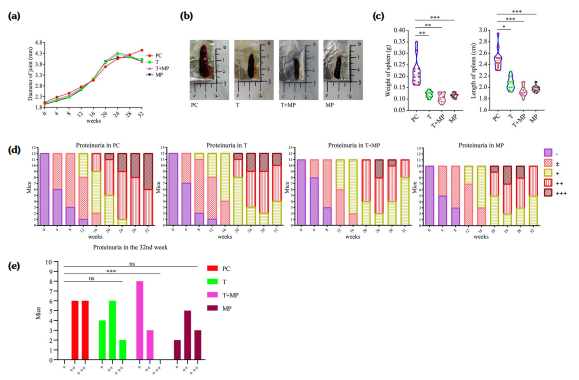 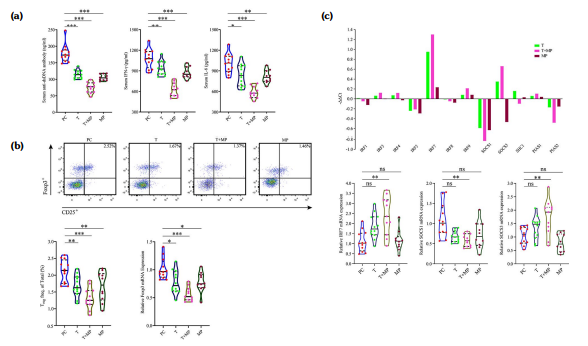 Systemic lupus erythematosus is a typical AID with a complicated mechanism.[12] The conventional treatment for SLE primarily includes glucocorticoids and immunosuppressive agents, which often have significant side effects. Tofacitinib, a drug that preferentially targets JAK1 and JAK3, exerts pleiotropic beneficial effects in murine lupus.[13] New Zealand black/ New Zealand white (NZB/NZW) F1 mice and Murphy Roths Large lymphoproliferative (MRL/lpr) mice are lupus prone. NZB/NZW F1 mice possess the defect of thymus, whereas MRL/lpr mice have a loss-of-function lpr mutation within the gene encoding Fas.[14,15] BALB/c mice can be induced to develop into immunocomplex glomerulonephritis with autoantibodies by pristane.[16] Although we used BALB/c mice for a pristane-induced lupus model other than SLE-prone mice, NZB/NZW F1 and MRL/lpr, which Furumoto et al.[10] or Ikeda et al.[13] used, we had consistent findings of reduced proinflammatory cytokine levels and amelioration of lupus nephritis, arthritis, and splenomegaly after treatment with tofacitinib. Different from Furumoto et al.’s[10] study, the present work also explored the relationship of tofacitinib with murine Treg cells and 12 related genes downstream of the JAK-STAT signaling pathway. Although we analyzed spleen tissues herein whereas kidney tissues were analyzed in Ikeda et al.’s[13] study, we had similar findings of significantly reduced frequency of Treg cells and reduced Foxp3 expression in tofacitinibtreated mice. Tofacitinib modulated the SOCS in this study and modulated the genes related to the IFN-signaling pathway in the research of Furumoto et al.[10] and Ikeda et al.[13]

The Foxp3 expression and splenic Foxp3+ Treg cell percentage in PC were higher than those in SC. These findings may be a response of Treg to overwhelming inflammation,[17] but the underlying mechanism has not been yet explained.

Tofacitinib can block the signal transduction pathway by inhibiting the phosphorylation of JAK-STAT.[22-25] SLE and STAT are closely related.[26,27] To identify the potential regulatory gene loci for tofacitinib, the present study tested 12 relevant genes downstream of the JAK-STAT pathway. Statistical differences were found in the mRNA expression levels of IRF7, as well as SOCS1 and SOCS3, but none were found in the other genes. IRF7 can promote the production of type 1 IFN, and a high expression of Foxp3 suppresses the positive feedback of IRF7 on type 1 IFN, thereby relieving inflammation caused by viral infection.[28] In the current study, we speculated that the high IRF7 expression in PC may be related to the high level of type 1 IFN pro-inflammatory cytokines in mice with lupus nephritis, consistent with reports of significantly increased type 1 IFN level in patients with SLE.[29] Type 1 IFN may also be induced by SOCS1 or through other mechanisms when IRF7 increases.[30,31] However, herein, IRF7 did not decrease but increased evidently at the mRNA level with a decline of SOCS1 after treatment in T and T+MP. We hypothesized that the antiinflammatory response was incomplete, and that the decrease in type 1 IFN expression remained limited even after treatment. This phenomenon could explain why complete recovery from lupus nephritis did not occur even though indicators improved (e.g., IFN-γ, pathological score, serum concentrations of anti-dsDNA antibody and IL-6, and Treg cell percentage). This finding may be attributed to the effect of tofacitinib on decreasing SOCS1 expression through the JAK-STAT pathway, thereby limiting the inhibition effect of SOCS1 on IRF7. Consequently, the synthesis and release of type 1 IFN are promoted. However, type 1 IFNs such as IFN-γ and IFN-γ were not examined in the present study; as such, internal correlation could not be illustrated.

A SOCS is a negative regulator of the JAK-STAT pathway and can restrain cytokine signal transduction when combined with JAK.[32,33] SOCS3 can also directly repress JAK1, JAK2, and tyrosine kinase 2 (Tyk2) but not JAK3.[34] In the current study, SOCS3 increased with decreased IL-6 in T and T+MP. Tofacitinib can directly suppress JAK1 and JAK3 but maintain JAK2 and Tyk2 within limits.[35-37] Accordingly, we speculated that tofacitinib could expand the inhibitory signal conduction cascade reaction and ameliorate systemic inflammation by inducing SOCS3, which may thus be a potential therapeutic target in the future.

In patients with SLE, the expression of IRF-related genes (IRF7, IFN-stimulated gene [ISG] 15, and IFN-inducible transmembrane protein 1) significantly increases during the active stage.[38] Furthermore, type 1 IFN regulatory genes in immature CD4+T cells are hypomethylated and overexpressed.[39] ISG15 is a potential bridge between types I and II IFN immune responses.[40] In the current study, IRF7 changed after tofacitinib administration. Thus, IFN regulatory genes may be potential pathogenic genes that regulate IFN levels and promote systemic inflammation and may serve as a therapeutic target for tofacitinib. We believe that tofacitinib is useful for lupus nephritis but cannot completely cure it even when combined with methylprednisolone. Drugs for decreasing type 1 IFN cytokine are possibly required.

The limitations of this study were as follows: functional examination of Treg cells was lacking, and the result of proteinuria analysis would have been better if ELISA was used instead of test papers.

In conclusion, tofacitinib can reduce the cytokine levels of IL-6 and IFN-γ and the level of anti-dsDNA, ameliorate systemic inflammation, and relieve nephritis and arthritis in a pristaneinduced murine model of lupus. Tofacitinib and methylprednisolone may act synergistically in the treatment of lupus in mice. SOCS3 may be involved during tofacitinib treatment.

Animal use protocols were approved by the Animal Experimental Ethical Inspection Committee of Fujian Medical University (ethical no: FJMU IACUC 2020-0023). The study was conducted in accordance with the principles of the Declaration of Helsinki.
Data Sharing Statement: The data that support the findings of this study are available from the corresponding author upon reasonable request.