Objectives: This study aims to assess the serum and synovial fluid (SF) levels of interleukin (IL)-17A in primary knee osteoarthritis (KOA) patients and to study their correlations with functional status, pain, and disease severity.

Patients and methods: This cross-sectional study was conducted between December 2017 and March 2018 and it included 70 patients (46 males, 24 females; mean age 57.3±10.0 years; range 34 to 76 years) with primary KOA and 30 age-, sex-, and body mass index-matched healthy individuals (20 males, 10 females; mean age 53.3±10.3 years; range, 35 to 70 years). Western Ontario and McMaster Universities osteoarthritis index (WOMAC), visual analog scale (VAS), Lequesne index, and Kellgren and Lawrence (KL) grading scale were used for assessment of the disease. IL-17A levels were measured in the serum for patients and healthy controls, and in SF for patients only using an enzyme-linked immunosorbent assay.

Osteoarthritis (OA) is the most common form of arthritis causing pain and disability. It is characterized by loss of articular cartilage and formation of osteophytes with synovial inflammation present in a significant proportion of patients.[1] Primary OA most frequently affects the hips and the knees.[2]

Proinflammatory cytokines (interleukin-1 beta [IL-1β], tumor necrosis factor-alpha [TNF-α], IL-6, IL-15, IL-18 and IL-17) have been shown to play important roles in the destruction of cartilage, synovitis, and pain.[3] IL-17 is the original member of a new group of cytokines (IL-17 A-F), produced mainly by IL-17-secreting CD4+ cells (also known as T helper 17 [Th17] cells).[4] The most frequently investigated members of IL-17 family were two proteins: IL-17A and IL-17F.[5] In rheumatoid arthritis (RA), IL-17A and IL-17F affected the synoviocytes by stimulating similar yet different signaling pathways. Also, IL-17A regulated a larger number of genes associated with inflammatory processes than IL-17F.[6] Increased expression of IL-17A was not restricted to synovial tissues of RA patients, as it was also observed in other forms of arthritis, including primary OA.[7]

Interleukin-17 can promote cartilage, synovial cells, macrophages, and osteocytes to produce the inflammatory cytokines such as TNF-α, IL-1β, and IL-6. IL-17 cells can promote receptor activator of nuclear factor-kappa B ligand (RANKL) differentiation in osteoblasts, and stimulate the degradation of matrix metallopeptidases and extracellular matrix, and the activity of bone resorption. In addition, IL-17 can also stimulate many chemokines; these chemokines can cause aggregation of neutrophils, macrophages, and lymphocytes in the synovial membrane, which creates a cascade amplification effect, resulting in more severe joint damage.[8]

Multiple studies have confirmed that IL-17 is the main factor leading to OA bone injury.[7,9,10] Clinical data also indicate that the levels of IL-17 and IL-17R are higher in the synovial fluid (SF) of patients with arthritis.[10] However, the impact of elevated IL-17 levels on OA severity and/or disability is still poorly investigated. Thus, in this study, we aimed to assess the serum and SF levels of IL-17A in primary knee OA (KOA) patients and to study their correlations with functional status, pain, and disease severity.

The present cross-sectional study was conducted at Department of Rheumatology and Rehabilitation, Minia University Hospital between December 2017 and March 2018. EPi Info software version 2000 (Centers for Disease Control and Prevention, Atlanta, Georgia, USA) was used to determine the sample size considering the target population as 85 patients per month, the prevalence of OA as 40%[11] with the confidence level at 95%, a power of 80%, alpha=0.05, and beta=0.10. Accordingly, 70 primary KOA patients with knee effusion (46 males, 24 females; mean age 57.3±10.0 years; range 34 to 76 years) who fulfilled the American College of Rheumatology clinical and radiographic diagnostic criteria for KOA[12] were included. Thirty healthy age-, sex-, and body mass index (BMI)-matched individuals (20 males, 10 females; mean age 53.3±10.3 years; range, 35 to 70 years) without any sign or symptom suggestive of OA, gout, RA, trauma, diabetes or other orthopedic disease served as the control group.

Patients with secondary OA due to trauma (known history of fracture or previous surgery) or known inflammatory arthritis or autoimmune diseases, patients with history of steroid injections over the past three months or those with neurological conditions or medical comorbidity (e.g., terminal conditions such as end-stage renal disease, associated severe liver dysfunction heart failure or malignancy) were excluded.

For disease assessment, visual analog scale (VAS) was utilized which is a horizontal line, 100 mm in length, anchored by word descriptors at each end. The patient marks on the line the point that represents their perception of their current state. A higher score indicates greater pain intensity.[13] Moreover, Western Ontario and McMaster Universities osteoarthritis index (WOMAC) was used which is a valid and reliable instrument for the assessment of OA of the lower extremities.[14] It consists of 24 items divided into three subscales. The pain scale includes five items asking about pain at activity or rest. The stiffness scale includes two questions. The function dimension explores the degree of difficulty in daily activities. The scores are summed for items in each subscale, with possible ranges as follows: pain=0-20, stiffness=0-8, physical function=0-68, and total WOMAC score is created by summing the items for all three subscales (0-96).

Lequesne index was used to evaluate the severity for knee disease. It is a 10-question survey, five questions pertaining to pain or discomfort, one question dealing with maximum distance walked, and four questions about activities of daily living. The total questionnaire is scored on a 0 to 24 scale. Lower scores indicate less functional impairment.[15]

The IL-17A levels were measured in the serum of patients and controls and in the SF of patients only using human IL-17 PicoKine enzyme-linked immunosorbent assay (ELISA) Kit (Boster Biological Technology, Pleasanton CA, USA). SF specimens were collected through knee arthrocentesis. The symptomatic knee was pointed as the index joint. If patients had bilateral KOA, the most symptomatic one was selected for aspiration.

Statistical analysis was performed using the SPSS version 16.0 (SPSS Inc., Chicago, IL, USA) software. Descriptive statistics were presented by number and percentage as well as mean and standard deviation. Statistical differences between groups were tested using Chi-square test for qualitative variables, independent sample t-test, and analysis of variance (ANOVA) for quantitative normally distributed variables. When there was a statistically significant difference, post hoc test by Tukey's honest significant difference (HSD) method was used to confirm where the differences occurred between groups. Assessment of normality was analyzed using the Shapiro-Wilk test. Correlations were calculated using Pearson’s correlation coefficient. The level of statistical significance was set at p<0.05.

The demographic and clinical characteristics of the studied population are displayed in Table 1. According to KL grading scale, 26 (37.1%) patients had Grade 2, 30 (42.8%) had Grade 3, and 14 (20%) had Grade 4. Sixty-eight patients (97.1%) were using non-steroidal antiinflammatory drugs and six patients (8.6%) were using chondroprotective drugs. Assessment of pain and functional status in KOA patients are shown in Table 2. 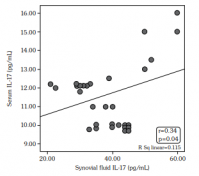 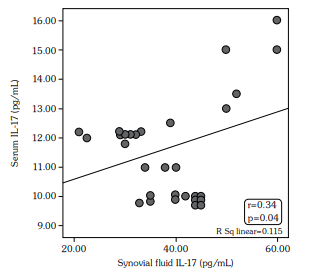 In the present study, the serum levels of interleukin-17A were significantly higher in KOA patients than controls, as reported by previous studies.[4,17-21] Wang and Mu[22] reported increased serum IL-17A levels in KOA patients while they were not statistically different from those in the controls (1.6±0.0 vs. 1.1±0.0), which may be referred to patients' selection as they included patients who underwent arthroscopic surgery for advanced KOA. However, they observed that SF and synovial membrane IL-17 levels were significantly higher in patients with KOA compared with controls.

The current study showed a significant positive correlation between serum and SF IL-17A levels in primary KOA patients. A similar correlation was reported by Lubbeke et al.[23] and Snelling et al.[24] and this correlation proposed capability of IL-17 as a non-invasive biomarker for disease stratification.

To our knowledge, our study is the first reporting a strong positive correlation between SF IL-17A levels and the duration of KOA.

Our results also revealed that serum IL-17A levels had significantly weak positive correlations with total WOMAC score, WOMAC stiffness score, and WOMAC function score, while SF IL-17A levels had significantly very strong positive correlations with the previous scores. In agreement with our results, several authors.[14,27-30] have described the association of disability, measured by the WOMAC scores, with higher levels of proinflammatory cytokines.

In the present study, SF IL-17A level not serum had a very strong positive correlation with severity of KOA (KL grade) which reflects the bone destructive role of IL-17 in OA. In concordance with our results, Wang and Mu[22] showed that IL-17 levels in the SF and synovial membrane are positively correlated with KOA severity, while they evaluated the severity of knee articular cartilage damage and synovitisrelated pathological changes by arthroscopy using the Outerbridge and Ayral scores. In contrast to our results, Liu et al.[17] reported no correlation between SF IL-17 level and KL grade, which may be referred to the method of patients' selection as they included KOA patients with KL grade ≥1.

In agreement with our study, researchers in a cross-sectional study[31] reported that serum IL-17 was not associated with KL grade. On the contrary, Mathiessen and Conaghan[32] and Mohamed et al.[19] found a positive link between serum IL-17 levels and the severity of KOA using KL grade. The low number of patients in our study with absence of patients with KL Grade 1 may explain the difference with the previous studies.

The present study had some limitations. Firstly, there were statistical limitations mainly in terms of power due to the relatively low number of patients. Secondly, we measured IL-17A levels in serum and SF of KOA patients; however, the detection of IL-17A expression in synovial membrane of KOA patients could have revealed more valuable information on the potential pathophysiological role of IL-17A. Lastly, we could not measure other inflammatory biomarkers (e.g., IL-1, IL-6, and TNF-α) which may provide further valuable information on the role of the IL-17 signaling pathway in OA related-pain and in radiographic progression.

In conclusion, higher IL-17A levels in primary KOA patients were significantly associated with longer disease duration, higher pain scores, worse quality of life, extreme disability, and advanced structural damage. These findings are important because they open a window of possibility for the early use of IL-17 antagonists for the prevention of joint destruction. Further studies with higher numbers of KOA patients are recommended to classify patients according to IL-17 levels and to verify our results.

The study protocol was approved by the Faculty of Medicine Ethics Committee. The study was conducted in accordance with the principles of the Declaration of Helsinki.

A written informed consent was obtained from each participant.
Data Sharing Statement: The data that support the findings of this study are available from the corresponding author upon reasonable request.