Objectives: This study aims to evaluate polysomnography findings and risk factors for sleep-disordered breathing in patients with systemic sclerosis (SSc).

Patients and methods: Thirty-nine patients (2 males, 37 females; mean age: 51.1±12.5 years; range, 21 to 76 years) who attended to the Rheumatology Clinic of Trakya University Medical Faculty between March 2014 and May 2014 were included in the study. Thoracic computed tomography, pulmonary function tests, carbon monoxide diffusion tests, echocardiography, and all-night polysomnography in a sleep laboratory were performed in all patients. Demographic and clinical characteristics of the patients were recorded. The Apnea-Hypopnea Index (AHI) scores were calculated. Disease activity was examined using the Medsger Disease Severity Scale (MDSS). Possible risk factors for sleep-disordered breathing were evaluated.

Results: Using the AHI of ≥5 for obstructive sleep apnea (OSA), 21 (53.8%) of the patients were classified as having OSA. There were no significant differences between the groups with and without OSA in terms of steroid use (p=0.4), CT involvement (p=0.3), and Warrick (p=0.6) and MDSS scores (p=0.5). Age, body mass index (BMI), and mean oxygen desaturation index were found to be significant in the univariate analysis (p<0.1); however, the multivariate analysis revealed only BMI as significant risk factor of OSA (p=0.028). In the multivariate analysis, the mean saturation was found to be significant risk factor for high pulmonary artery pressure (p<0.001).

Conclusion: Although OSA is common in SSc, only increased BMI is a significant risk factor of OSA, but not lung involvement, Warrick scores, or MDSS scores.

Sleep disorders are a major problem in SSc. The limited opening of the oral orifice in SSc patients, gastroesophageal reflux, and dysmotility play a role in the development of breathing disorders during sleep in these patients.[2] In addition, it is considered that the systemic steroid which is used for the treatment of the disease may also lead to sleep problems.[3]

The number of studies investigating sleep problems in patients with ILD has been increasing recently.[4-6] However, there is only one study which investigated sleep problems with polysomnography (PSG) in SSc patients in the literature.[2] In a recent retrospective study, overnight oximetry records were examined using electronic health records.[7]

In the present study, we aimed to evaluate PSG findings and risk factors for sleep-disordered breathing in patients with SSc.

This prospective study was conducted at Trakya University Medical Faculty of Rheumatology Outpatient Clinic between March 2014 and May 2014. Patients older than 18 years who attended to our clinic and fulfilled the criteria of the American College of Rheumatology (ACR)[8] for SSc were included. Patients with heart failure, asthma, chronic obstructive pulmonary disease, kyphoscoliosis, Class IV dyspnea, connective tissue disease without SSc, predefined sleep disorders, and neurological or psychiatric disorders were excluded from the study. A total of 51 patients were screened and, among them, 40 patients consented for PSG. One patient with an advanced degree of kyphoscoliosis, which might have affected the statistical analysis, was excluded from the study. Finally, a total of 39 patients (2 males, 37 females; mean age: 51.1±12.5 years; range, 21 to 76 years) were enrolled. A written informed consent was obtained from each patient. The study protocol was approved by the Trakya University Medical Faculty Ethics Committee (TÜTF-GOKAEK-2013-176). The study was conducted in accordance with the principles of the Declaration of Helsinki.

After their enrolment in the study, all the patients underwent a clinical evaluation, including a pulmonary function test (PFT), carbon monoxide diffusion test (DLCO), highresolution computed tomography (HRCT), and PSG. Transthoracic echocardiography (TTE) was also performed in the cardiology laboratory.

After the clinical evaluation, the patients were scheduled for PSG in the sleep laboratory. All patients underwent an ear, nose and throat examination before the study. The patients were advised not to consume caffeinated beverages and alcohol and not to take medications affecting sleep architecture (e.g., antihistamines, antidepressants, or hypnotics). In all patients, the lengths and weights were measured, and body mass index (BMI) values were calculated (weight [kg]/lenght2[m2]). Their symptoms in terms of breathing disorder during sleep (snoring, witnessed apneas, and excessive daytime sleepiness) were investigated, and all the patients completed the Epworth Sleepiness Scale (ESS). After consuming a light dinner, the patients attended to the laboratory at 09.00 PM. The study took place between 10.30 and 11.00 PM. When the patients woke up in the morning, the study was terminated.

1, Apnea: Score a respiratory event as an apnea, when both of the following criteria are met:

2. Hypopnea: Score a respiratory event as a hypopnea if all of the following criteria are met:

3. Apnea-Hypopnea Index (AHI): It represents the number of total sleep apnea and hypopnea events per hour during sleep.

According to these criteria, obstructive, central and mixed apnea number, apnea index (AI), and AHI were evaluated for each patient. Saturation chases of the patients were performed by means of pulse oximeter; average and minimum oxygen percentages were evaluated separately according to awaken, asleep non-REM (NREM) and REM sleep stages. In addition, oxygen desaturation index (ODI) values were recorded.

After the recordings were evaluated, those called AHI ≥5 were regarded as obstructive sleep apnea (OSA). The OSA severity was regarded as mild, (5-15) moderate, (16-30) and severe (>30). Rapid eye movement-related OSA was accepted as AHI ≥5 and REM/NREM AHI ≥2.[10]

The HRCT was recorded by a 64-slice multidetector CT scan (Aquilion, Toshiba Medical Systems, USA) using standard references. The recordings were obtained during maximum inspiration and in the supine position. The patients’ Warrick scores were calculated based on their HRCTs.[11] The HRCT was calculated semiquantitatively as follows: 0= normal, 1= mild (<8 points), 2= moderate (8-15 points), and 3= severe (>15).[12]

Standard respiratory function tests were applied to all patients using a standard computerized spirometry system (Sensor medics, V max 22 PFT SYSTEM, USA). A DLCO was performed and the actual DLCO level was corrected according to hemoglobin levels. The results were presented according to the expected values in terms of percentage.

Statistical analysis was performed using the PASW version 17.0 software (SPSS Inc., Chicago, IL, USA). Continuous variables were expressed in mean ± standard deviation or median (min-max), while categorical variables were expressed in number and percentage. In the univariate comparison, the Chi-square (c2) or t-test was used, as appropriate. The correlation between the parameters was assessed using a non-parametric Spearman or Pearson correlation analysis. Variables with a p value of <0.1 as a result of univariate analysis were included in the multivariate linear regression analysis. A p value of <0.05 was considered statistically significant.

When questioned about chest disease, the most frequently reported symptom was dyspnea (n=26, 66.7%). Reflux symptoms were reported in 23 (60.5%) patients, and dysphagia was reported in 12 (30.8%) patients. Among the cardinal symptoms concerning respiratory disorder during sleep, snoring was experienced in nine (23.1%) patients, excessive daytime sleepiness in 13 (33.3%) patients, and witnessed apnea in two (5.1%) patients. The mean ESS score was 4.5±6.1. 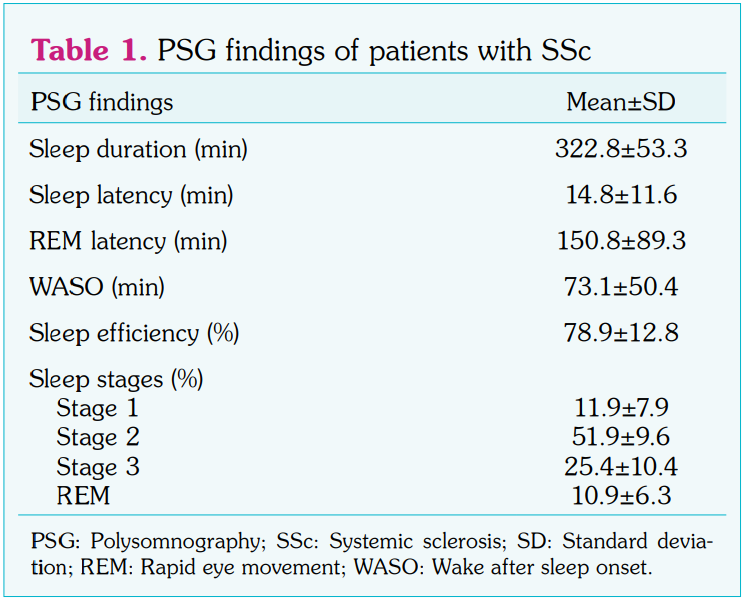 Table 2. Severity of OSA according to the AHI
×

In the literature, there is only one study investigating sleep problems with PSG in SSc patients, which showed no respiratory disorder during sleep.[2] In our study, the prevalence of OSA in patients with SSc was 53.8%. There was no significant difference in terms of steroid use, lung involvement on HRCT, Warrick score, MDSS score, or pulmonary hypertension in those with and without OSA. In addition, OSA showed a significant correlation with BMI. There was also a correlation between the mean ODI and sPAP. Furthermore, the sleep duration, sleep quality, and REM ratio of the patients with SSc decreased, but they increased by Stage 1 and REM latency. In another study, the sleep efficiency and REM ratio decreased in patients with SSc.[2]

Based on an AHI of ≥5, the prevalence of OSA in the general population is 24% for men and 9% for women.[14] The OSA prevalence in patients with ILD ranges between 17 and 88%, and most of these studies include patients with idiopathic pulmonary fibrosis.[6,15] In a study which was conducted in Turkey investigating OSA in ILD, the overall prevalence was found to be 68%, whereas this rate was 55.5% in SSc patients.[4] In a study including PSG findings in patients with SSc, 27 patients were evaluated and none of the patients had AHI ≥5.2 This difference may be the result of the methodology used to determine OSA. In another study by Prado et al.,[2] a pulse oximeter was not used, considering that it cannot measure sensitively due to fibrosis of the skin.

Conflicting results have been reported regarding the effect of BMI on sleeping parameters in the PSG studies in ILD patients. In a study conducted by Aydoğdu et al.,[5] there was a difference in terms of parameters regarding PSG between the two groups, one of them had a BMI of above 30 kg/m2 and another one had a BMI of below 30 kg/m2. In their studies, Pihtili et al.[4] excluded patients who had BMI >30 kg/m2, and found a weak correlation between the AHI and BMI, consistent with our findings. However, in a study including patients with idiopathic pulmonary fibrosis, there was a strong correlation between the AHI and BMI.[16]

It has been thought that corticosteroid use may increase the risk for OSA by causing obesity.[3,17] On the other hand, Pihtili et al.[4] found no significant difference between the groups with OSA and without OSA in terms of using steroid, which is consistent with our study.

To the best of our knowledge, there is no study in the literature investigating the relationship between involvement on HRCT and OSA in SSc patients. Pihtili et al.[4] used chest X-rays to evaluate diffuse parenchyma involvement in ILD and found that the AHI was higher in patients with diffuse involvement.

Nonetheless, there are some limitations to this study. One of the limitations is the lack of the control group in the study. Another limitation is that sPAB was evaluated using TTE, and right heart catheterization was unable to be performed.

In conclusion, our study results showed that about half of the SSc patients had OSA. The OSA frequency can be reduced by providing weight control. In addition, it may be beneficial to evaluate patients with hypoxia and no comorbidities other than SSc in terms of OSA and pulmonary hypertension. However, further largescale, randomized-controlled studies are needed to confirm these findings.

We thank Prof. Necdet Süt, MD for his valuable assistance for statistical analysis and Ömer N. Pamuk, MD from the rheumatology clinic for his helpful support.